Bryston sure has been spreading its metaphorical wings as of late. Beginning with an ambitious foray into the world of loudspeakers in 2012, the company has continued to broaden its offerings, most recently with the surprising release of a turntable driven by an innovative power supply, a range of modular phono amplification products, the next-generation “cubed” series of power amplifiers, and the delightfully unexpected announcement of a new CD player.

This expansion effort is further exemplified by developments within the company’s product lines. The Bryston BDA-3 DAC enhances the functionality of the 2013 Product of the Year Award-winning BDA-2 by adding a second asynchronous USB input and four HDMI inputs. PCM sample rates up to 384kHz are now supported, as are DSD rates up to DSD 4x (aka DSD256). Most significantly, not only can DSD signals be received by the BDA-3’s USB inputs but also from suitably equipped HDMI sources. In light of the questionable ongoing availability of premium SACD players—and the finite lifespan of any optical-disc transport mechanism—this ability to play SACDs in native DSD mode over HDMI from inexpensive universal-disc players adds a capability heretofore unavailable from high-performance stereo DACs.

Traditional digital sources are accommodated by one AES/EBU balanced XLR input and three SPDIF inputs, one for each connectivity variant: 75-ohm coaxial BNC, coaxial RCA, and optical TosLink. Performance is elevated by a pair of AKM Verita series D/A converters, configured in dual-differential mode to optimally drive Bryston’s discrete Class A balanced output stage. (Both single-ended RCA and balanced XLR outputs are provided.) Three of the HDMI inputs support HDMI v1.4a and HDCP 2.0, while the fourth HDMI input is compliant with HDCP 2.2 sources. Conveniently, the last-selected HDMI input’s video signal continues to be passed through the BDA-3’s HDMI output even after a different non-HDMI input has been selected.

The addition of DSD support to the USB and HDMI inputs necessitated one change from the BDA-2: The user-switchable synchronous upsampling feature (to 176.4kHz from 44.1 and 88.2kHz signals, or to 192kHz from 48 and 96kHz signals) now functions only on the AES/EBU and SPDIF inputs. Bryston’s optional BR2 system remote control has not yet been updated to enable selection of either the second USB input or the four HDMI inputs, but codes to program universal remote-control handsets are provided in the manual. In addition to Bryston’s typical comprehensive support for a variety of custom-install protocols, the BDA-3’s Ethernet port and DHCP client enable access via a web browser when connected to your network. The straightforward browser-accessed user interface not only enables firmware updates, but also visually replicates the front panel LED and switch array, allowing selection of every input, and displaying sample rate and signal-lock status. In a clever touch, the web interface of Bryston’s BDP series of music players automatically detects a networked BDA-3 and displays a convenient link to the DAC on the BDP home page. 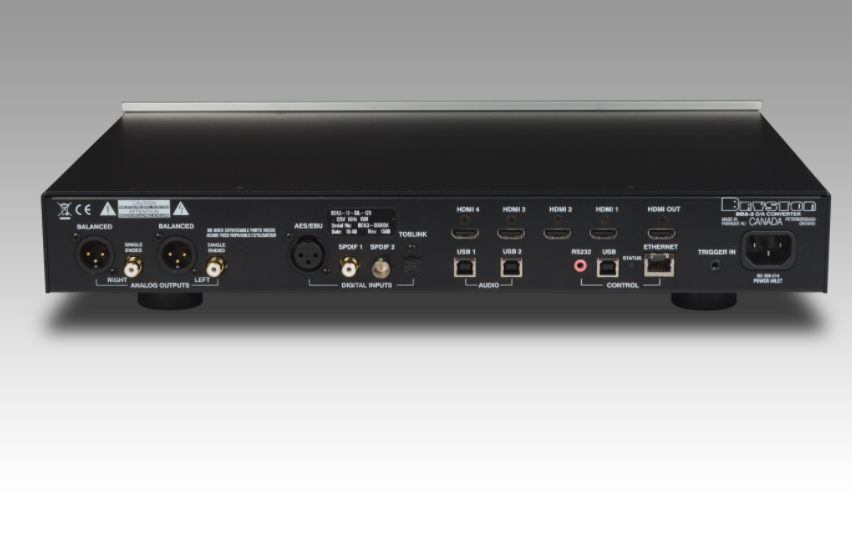 I began assessment of the BDA-3 by comparing it against the BDA-2, which has served as my reference ever since my review in Issue 233. With either the Bryston BDP-1 or BDP-2 file player as the digital source, the BDA-3 immediately drew my attention to the vibrating resonance of the bodies of acoustic string instruments, each note blooming richly and decaying naturally into the surrounding air. Everything played through the BDA-3 came across with a lithe ease, even-tempered and well balanced. Harmonics extended into the upper octaves with a relaxed open airiness, refreshingly free of shrillness.

This exceptional verisimilitude allows the distinctive character of specific instruments to be discerned with considerably less mental effort than is often the case, nowhere more aptly demonstrated than by the measured, slowly awakening “Dawn” dialogue between Simon Shaheen’s oud and V.M. Bhatt’s mohan vina (Saltanah, Water Lily Acoustics 24/88.2 download). I’ve heard this performance hundreds of times, through all manner of equipment, but the BDA-3 enabled me to follow the intentionality of the two masters’ playing as never before—making their performances engrossing from shadowed beginning to radiant ending.

As I continued comparing the BDA-3 and BDA-2 with familiar recordings, it became clear that the newer design rendered instrumental timbres with more substantive physical presence. Every instrument simply exhibited fuller, weightier solidity, independent of the frequency range covered. I suspect that this fundamental shift in tonal perspective may be due to a change in the type of digital filter that Bryston has chosen for the BDA-3 relative to the company’s prior digital offerings. This advancement manifested itself spatially, as well, with instruments and singers more fleshed-out both tonally and dimensionally.

One of the most enlightening aspects of following the writings of this journal’s founder Harry Pearson was the evolving sense of discovery, and of the sometimes difficult task of trying to find the right words to describe what we hear. I readily empathize, as I find myself struggling to convey my most salient impression of the Bryston BDA-3. It did not take long to ascertain that listening through the BDA-3 was simply more evocative of the experience of hearing the real thing, significantly less impaired by the host of digital artifacts that often remind us that we are listening to a reproduction, rather than to live music.

As I have come to expect from Bryston DACs, the BDA-3 was reliably consistent regardless of the digital input format. Differences between sources and cables were readily apparent, whether via SPDIF, AES/EBU, USB, or HDMI; this enables the user to choose the best-sounding connectivity option from each source component, and remain confident that the BDA-3 will not constrain its performance.

After establishing rather quickly and that the BDA-3 could deliver such a high level of musical engagement, I moved on to assess the two primary new features: its HDMI inputs and DSD decoding. I encountered only one operational glitch with the BDA-3’s HDMI inputs: losing the HDMI signal lock—e.g. if the source is powered off—generates an audible pop. In all fairness, this issue is hardly unique to the BDA-3, and perhaps can be addressed by a future firmware update. [Bryston says, “Pops have been reduced or eliminated in most circumstances as of latest firmware released Nov, 2016.” —Ed.]

With both CDs and DVDs, the HDMI outputs of both my Sony BDP-BX37 and BDP-S6200 Blu-ray players sounded decisively more refined and neutral than those players’ SPDIF outputs, mirroring exactly what I have heard from three generations of Oppo Blu-ray players over the past several years. SPDIF from the Sony players sounded veiled, flattened, compressed, and jumbled, while the HDMI connection allowed music to flow with a smoother and more lucid clarity.

I pressed into service my aging Marantz DV-9600 universal DVD/SACD player, a considerably more robust product than the flyweight Sony Blu-ray players. First impressions of the SPDIF output of the Marantz reminded me of why that unit has proven its mettle both as a player and a transport over the years, delivering a lively, direct immediacy. HDMI from the Sony BDP-BX37 initially sounded comparatively muted, but after iterative comparisons it became clear that the Marantz player’s energetic character was due to a host of “old school” digital artifacts: ringing, diffuse temporal smearing, “peak shriek,” etc. In contrast, HDMI from the Sony player sounded considerably more relaxed and linear, both dynamically and across the audio frequency spectrum, better preserving the purity of instrumental timbres and the complex interplay of musical lines.

The ability of the Bryston BDA-3 to achieve such a high level of sonic performance from the HDMI output of an inexpensive universal disc player is a most welcome development, considering the finite lifespan of any optical-disc player, regardless of price. Over the decades, I have been privileged to hear some of the finest CD transports ever designed, most memorably the Goldmund Mimesis 36 ($14,990), but eventually all such products will need to be repaired, and essential core components may simply no longer be available. Bearing this cold truth in mind, the BDA-3 will be of particular interest to readers who continue to prefer the simplicity of optical-disc playback to the daunting task of migrating their music library to a file-based playback paradigm.

Moving on to DSD sources further solidified my enthusiasm for the BDA-3. All of the aforementioned virtues were maintained during DSD playback, with additional gains in solidity, dimensionality, tonal richness, precision of note shape, and dynamic expressiveness. The aforementioned Marantz DV-9600 faithfully served as my benchmark SACD player for many years, but in this case only exemplified how much “that was then, but this is now.” Regardless of genre or musical complexity, the vintage Marantz SACD player sounded comparatively grungy, edgy, sluggish, turgid, and confused. 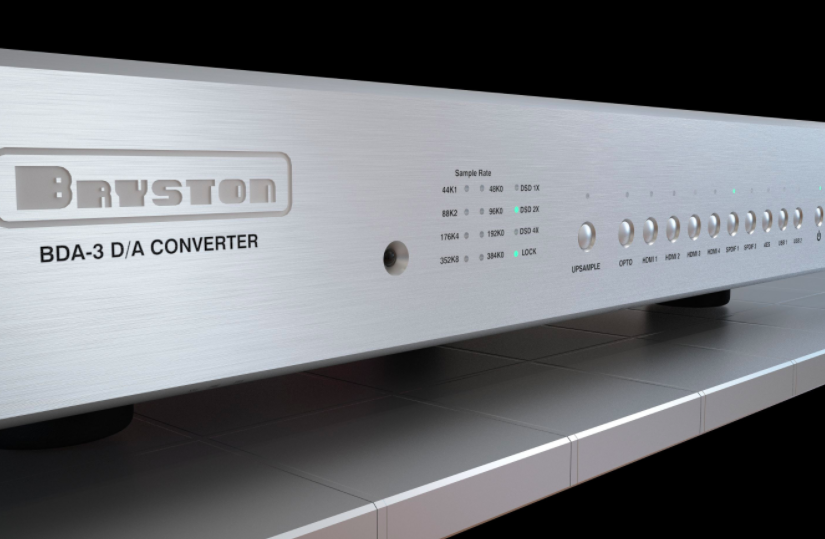 In head-shakingly stark contrast, SACD playback over HDMI from the Sony BDP-BX37 (used exclusively after the BDP-6200’s disc drawer mysteriously locked shut) sounded dramatically more open, incisive, controlled, focused, linear, and responsive to the ebb and flow of musical contours. All manner of details were far easier to discern through the Bryston DAC, such as the exquisite textural precision of Mahler’s scoring, the differentiation of individual instruments within massed string passages, and the sheer ease of following Bernstein’s expressive direction of the New York Philharmonic performing the Titan Symphony (Sony SACD). Indeed, hearing the BDA-3 play this SACD via HDMI from an inexpensive Sony Blu-ray player evoked fond recollection of the reference-grade Marantz SA-1 SACD player responsible for my personal “conversion” into an enthusiastic supporter of the nascent SACD format at the beginning of the millennium.

Listeners sometimes draw inappropriate conclusions from misleading “apples vs. oranges” product comparisons. For instance, comparing a really good (and usually expensive) CD player against a mediocre (and usually relatively inexpensive) SACD player might lead to the erroneous conclusion that DSD offers little benefit over CD’s 16-bit/44.1kHz PCM resolution. In order to test this hypothesis, I ripped the CD layer of several SACDs, and selected a group of tracks from only those albums that preserved the same waveform envelope shape as the equivalent tracks on the SACD layer. I played these 16/44.1 PCM files from the Bryston BDP-1, and compared them to the DSD layer of the SACDs, connected via HDMI from the Sony Blu-ray player.

Not surprisingly, DSD file playback from the Bryston BDP-1 Digital Player (using the Oyaide Type A USB cable) surpassed SACD playback via HDMI. This performance differential was consistent with what I have heard from playback of PCM files vs. their optical-disc equivalents over the past decade. There’s really no point in deconstructing or dissecting the elevated performance of DSD file playback over SACD playback. Everything described above about SACD playback was simply better with DSD file playback from the BDP-1.Progress in digital playback essentially comes down to reducing the artifacts that distract the listener from following the music. The evolutionary development of Bryston’s DACs from the original BDA-1 to the BDA-3 has been an object lesson in digital progress. Bryston’s BDA-3 DAC surpasses the high-value performance standard set by the BDA-2, enables inexpensive HDMI-equipped disc players to function as premium source components, and adds exceptionally engaging DSD playback to its potent mix of virtues. I’ve already purchased the review sample as my new reference.

Steve Earle & the Dukes: So You Wannabe an Outlaw