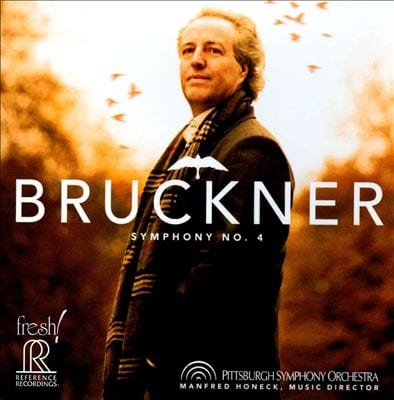 Manfred Honeck and the Pittsburgh Symphony Orchestra’s last project for Reference Recordings garnered a 2015 Grammy nomination for Best Orchestral Recording, so expectations were high for this one, too. Perhaps that’s unfair, as Bruckner makes very different demands on a conductor and orchestra than do Dvorák and Janácek. But this performance of Bruckner’s “Romantic” symphony is an unqualified success. Honeck’s approach to the opening movement is assertive, almost impatient in the way it presses ahead. This makes the Andante that follows seem suit- ably relaxed, a true “walking” tempo. The third movement has an exuberant quality—the peaceful Trio section in the middle is barely a respite—yet there’s less of the obsessiveness that Bruckner scherzos of- ten seem to possess. The conductor’s pacing of the 21:32 finale is masterful, moving among states of determination, ecstasy, and triumph. For this RR Fresh! release Boston’s nonpareil Soundmirror team is behind the controls—Dirk Sobotka, Mark Donahue, and John Newton. The sound is gloriously full and dimensional, both in stereo and surround. Not only is there layered depth and good imaging, the full orchestral sound has mass of its own, expanding to fill Pittsburgh’s Heinz Hall at the Symphony’s grandest moments.