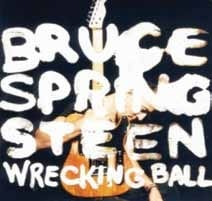 Bruce Springsteen’s latest solo album, Wrecking Ball, is a collection of populist songs powered by the recession-driven fear and unfocussed rage of working (and out-of-work) Americans. These rough-hewn protests harken back to Woody Guthrie, Pete Seeger, and Bob Dylan, but the music is given elaborate, at times almost elephantine arrangements, with Celtic drums and penny whistles, choirs, female vocalists, banjos, brass, and (believe it or not) even some hip hop riffing. Highlights include an ironic anthem (“We Take Care Of Our Own”), a catchy, heavily pounding chain gang holler (“Shackled and Drawn”), and “Jack of All Trades,” a haunting ballad about a man laid low by hard times, trying to reassure his loved ones (and convince himself) that honest work always prevails. While Springsteen has touched on themes of despair and struggle before on solo albums (Nebraska, The Ghost of Tom Joad), and with the E Street Band (Magic), Wrecking Ball offers little hope, tunneling deep into the dark recesses of the country’s psyche, and leaving no doubt whom The Boss blames for its agony. For him, subtlety isn’t the point when real people are hurting.