I will say this for B&W’s 705 Signature: This loudspeaker sure knows how to make an entrance. This $3999 two-way compact which bears the British firm’s famously eye-catching top-mounted tweeter cuts a striking figure with its crisp seamless lines, mirror-like veneers, six-sided finish, and gleaming appointments. This bass-reflex monitor just looks like money, fresh from London’s Regent Street. At least part of that impression is owed to the fact that the 705 Signature (and its floorstanding cousin, the 702 Signature) have a lot in common with B&W’s bespoke flagship 800 Series. This cross-platform sharing actually originated in the more modestly priced 700 Series, which debuted in 2017. But the Signature edition takes it a step further in refinement. Most prominent is the pricier solid-body assembly of the “tweeter-on-top,” and the distinctive gleam of its Continuum cone driver. Plus various upgrades and refinements to the crossover and heatsinking, including specially treated bypass capacitors sourced from Mundorf.

The newly devised 25mm carbon dome tweeter is composed of two sections, a thirty-micron aluminum dome front section stiffened by a PVD (physical vapor deposition) coating of carbon. Paraphrasing B&W, “the second section is a 300-micron carbon ring that matches the form of the main dome, then is bonded to the inner face of the structure.” The outcome is stiffness and resistance to distortion without undue mass, and a first breakup point of 47kHz. B&W also substituted aluminum instead of zinc for the bullet-shaped housing of the Signature tweeter. The milled aluminum (over 1kg) makes for a stiffer and less resonant structure than zinc, and benefits from the same decoupling mechanism and acoustically transparent grille design of the 800 Series Diamond. A side benefit is that it also allows the use of the mass of the tweeter body as a heatsink for the dome.

In the 6.5″ Continuum cone mid/bass, B&W enthusiasts will identify another component that originally was exclusive to the 800 Series Diamond. Continuum is a woven composite design, which B&W states avoids the abrupt transition from pure pistonic movement to breakup-mode behavior. Ultimately, every driver will break up, but when distortion can be as highly controlled as it is in the Continuum transducer, there’s greater potential for a more open, transparent, and detailed midrange.

I could say more than a few words about the fit and finish of the 705 Signature, but let me sum it up in one word—sumptuous. My flawless review sample was crafted in Datuk Gloss ebony-colored veneer and bore a striking, exotic, tiger-stripe grain pattern. The wood originates from a sustainably sourced supply, in this case from specialist Italian wood company Alpi. Bowers & Wilkins adds to Alpi’s painstaking workmanship by applying nine coats of finish, including primer, base coat, and lacquer. 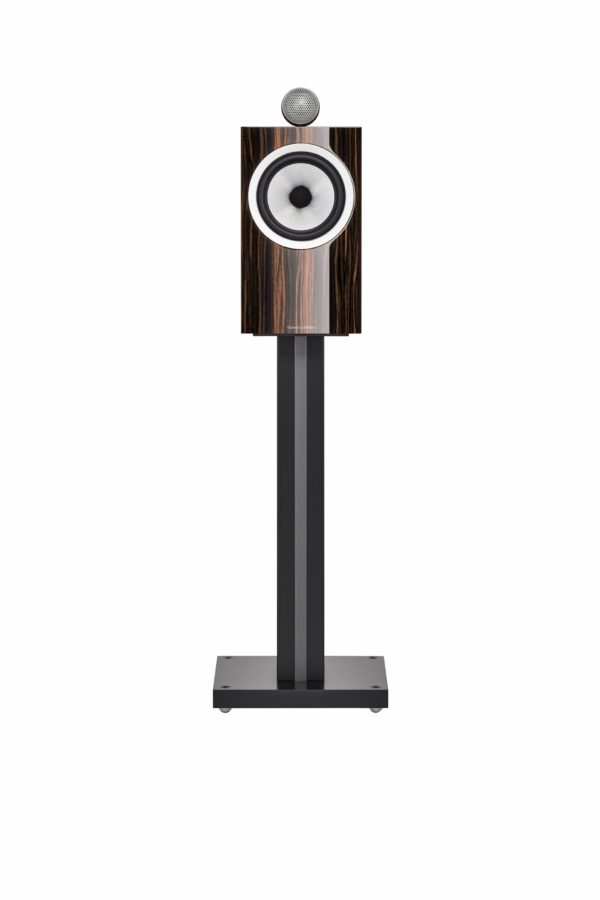 As for the sonics of the 705, my first impressions held true throughout the evaluation; from the start the speaker was high-spirited and balanced. Like a thoroughbred at the Derby, the 705 seemed to burst from the gate, surging with pent-up energy. Its dynamism was evident at pretty much every level across the frequency spectrum. It delivered well-rounded midrange tonality, shaded slightly to the warmer, romantic side of neutral—a sonic signature that seems built into the genetic code of B&W loudspeakers (and into many British monitors, for that matter). Its midbass to lower midrange was well controlled and defined—exceptionally so in light of its modest 13-inch height. The rear port—in B&W’s characteristic, turbulence-reducing dimpled design—was mostly inaudible, though there was, at moments, an excess weightiness in the upper bass that hinted at some port augmentation.

The overall voice of the 705 Signature was forthright rather than tonally recessive. It was punchy and aggressive when it needed to be and soothing where appropriate. It was a compact that summoned buckets full of colorful timbral details and contrasts, and possessed a full-blooded physicality that sustained and supported musical images. Soundstage information was straightforward, imparting good dimensional information, though this was not its strongest suit. (Any number of competitive two-way compacts will challenge it in that regard.)

A prime example of the 705 Signature’s all-around skillset was Alison Krauss’ country-tinged cover of Lennon-McCartney’s “I Will.” The track, with its guitar and banjo images snapping from the studio mix, exhibited an electric immediacy. In that vein, the closing drum fill during “When You Say Nothing At All” was heroic in its weight and scale. Parenthetically, the scale of this particular cue is curiously out of proportion with the rest of the song, suggesting that someone in the control room was having a little too much fun dialing up the percussion in the final mix.

The vivacious character of the 705 Sig’s sonics is no accident, in my view. To a large degree it reflects elements of the professional-recording “studio monitor” culture in which B&W is still quite prominent. Thus, there is no wimp factor. The 705 Sig heads in the other direction, muscling in on the recording to bring to light every last detail: an errant baton striking the podium, a gasp from an audience member, the shift of a pianist on the bench, the rustle of pages of a score being turned on a musician’s music stand. And like a true monitor, the 705 Sig isn’t shy about being driven hard. When propelled by top-quality amplification with sufficient headroom, it is capable of a level of sheer unconstrained output that caused me to bail out before it did.

Bass quality was outstanding, especially for a loudspeaker of this humble size. During Sheryl Crow’s “I Shall Believe,” bassist Dan Schwartz’s cavernous and enveloping artistry was reproduced with impressive pitch and extension. The Police’s “Tea In The Sahara” was also reproduced with the impressive rhythmic interplay of kickdrum and electric bass fully intact. The bass drum sounded grounded in reality, not just a random set of rhythmic pulses. No, the 705 Sig couldn’t uncover the deepest notes on this track, but where it played it was honest and open. Compared with a much larger floorstander or a subwoofer-augmented system, of course, the deepest bass and dynamics were throttled down, but the “essentials” were there and the brain tended to fill in the gaps. I rarely felt short-shrifted by the 705.

Solo piano reproduction, a potential deal-breaker for this reviewer, was some of the best I’ve heard from a compact. As I listened to Constentino Catena’s reading of Debussy’s Clair de Lune, the dynamic touch he teased out of the concert grand conveyed all kinds of keyboard character, mood swings, and temperament, from the gentlest pianissimos to the heavier fortes. The 705 even captured a semblance of soundboard action, air, and weight. It also hung onto the sustain pedal to the end of the track.

This gentle piano track was also illustrative of the 705 Signature’s resolving power, a trait that cropped up time and again during my evaluation. The speaker had an ability to bring to life the smallest cues, clinging to a decaying note, a waft of ambience. It had a level of resolution that rewarded the astute listener, and caused me to listen ever deeper into the most delicate moments. Ricki Lee Jones’ cover of the Billie Holiday classic “I’ll Be Seeing You” is a terrific track to enjoy this specific brand of transparency. The sonics of this LP ring true. The quirky Jones vocal and classical guitar accompaniment sang with a full array of transient delicacies and intricate voicings, immersing me in the atmosphere of the mix

Most significant to my own listening biases, the B&W proved to be a very good and flexible voice speaker. The 705 Signature reveled in reproducing the signature details that define a singer’s instrument. On a track like CS&N’s “Southern Cross,” for example, the 705 caught the leading edge of Stills’ vocal and nailed his characteristic gravelly throatiness down pat. Then there was the 705’s sensitivity in capturing the breathy vibrato of Jennifer Warnes’ “Song for Bernadette,” or the husky alto of Lauren Daigle’s “Rescue” from the 45rpm Bernie Grundman LP remaster of her 2018 hit Look Up Child. My one minor reservation was a hint of presence dip with these female vocalists that softened and rounded the leading edges of their voices. On the one hand, the effect was coddling to the ear, but on the other, it also subtracted slightly from attack and emotion.

The Bowers & Wilkins 705 Signature is the product of a mature and experienced company that understands the musical imperatives of overall balance and listenability. A compact loudspeaker that can shrug off the bonds of its modest proportions and become something much grander is a rarity, but the B&W most assuredly does these things. In sum, the 705 Signature is what I’d describe as a true musical sophisticate—a natty dresser and a formidable addition to any listening room. Sign me up!