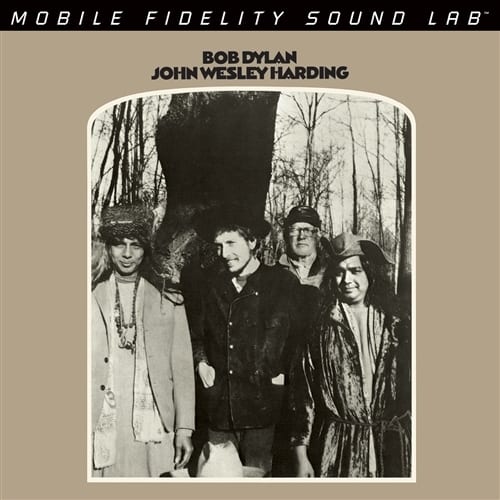 The sessions for John Wesley Harding took place in Columbia’s Nashville recording studios, where most of Bob Dylan’s previous album, Blonde on Blonde, was also recorded. Bob Johnston was again the producer, and the core sidemen on JWH—Charlie McCoy (bass) and Kenny Buttrey (drums)—also played on the BoB sessions. Yet the albums are radically different. Musically BoB was looser and the sound much fuller, with electric guitar and organ playing prominent roles. Much sparser is JWH, where the rhythm section (and especially the electric bass) is relatively high in the mix while Dylan’s acoustic guitar and piano are recessed. (Pete Drake’s pedal steel on “Down Along the Cove” and “I’ll Be Your Baby Tonight” offer the closest thing to adornment.) Somehow the sober, stripped-down recording seems to fit Dylan’s new persona (part moralist, part mystic), his lyrics and voice both conjuring up an older America. Razor-sharp in its presentation of clean-sounding drums, taut bass, a tamed (i.e., less shrill) harmonica, and Dylan’s rich, understated vocals, MoFi’s remastered JWH brings things clearly into focus for an album that will always serve as a model for those who believe less is more.