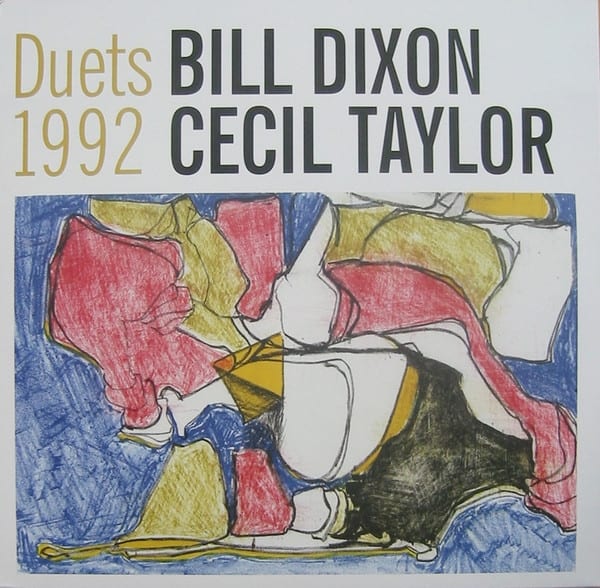 Listening to abstract music isn’t for everybody. But for those who go with flow of freely improvised “jazz”—performed with no written score and no rehearsal and absent the familiar touchstones of premeditated melody, harmony, and rhythm—this previously unissued meeting of two avant-garde giants is audio manna from heaven. Perhaps literally, as trumpeter Dixon, the organizer of the landmark 1964 “October Revolution in Jazz,” died in 2010, age 84, and pianist Taylor, an “October Revolution” participant and free jazz founding father of greater renown, passed in 2018, age 89. After Taylor’s 1966 Conquistador, the crossing of their paths was never documented in a studio until July 2 and 3, 1992, in Villeurbanne, France, during a European tour. Their very different stylistic approaches are pivotal to the pleasures of immersive listening to these 11 numbered pieces across two virgin vinyl LPs. Comparison to abstract impressionist painting is appropriate, but the music’s constant movement evokes even more the spontaneous synchronicity of huge swells in the ocean—Dixon’s sustained notes, legato lines, and echoing electronic effects, recessed deep in the mix—and seemingly random sparkles of light on the surface—Taylor’s jittery, splashing notes, altogether mesmerizing and sublime.