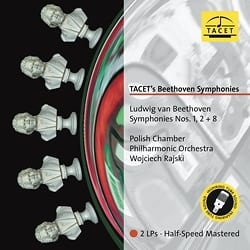 You’re thinking, do we really need a new complete set of Beethoven symphonies, especially from an unfamiliar orchestra and conductor? Well, if you’re an audiophile of the analog persuasion, you may conclude that these six vinyl releases (Nos. 5, 6, and 7 are available as single LPs while the other symphonies appear on 2-LP sets) are, in fact, indispensable.

The German label TACET’s devotion to older recording methodologies is apparent from the generously annotated gatefold album covers that feature large photos of the vintage tube microphones—Neumann U 47s, U 67s, and M 49s—employed to produce these recordings. The amplifiers and tape recorder used at the sessions over a ten-year period (2005–2015) were also tube designs. To assure that the resulting LPs sound as good as possible, TACET spreads the nine works over nine LPs (more commonly, Beethoven symphony boxes end up with eight or even seven discs) and they are half-speed mastered. As is customary for this label, pressings are on gratifyingly quiet 180-gram vinyl. Finally, three LP sides—holding the exuberant finales to Nos. 5, 7, and 9—have been cut backwards—that is, you place the stylus down near the label and it tracks to the outer edge of the disc. This ameliorates the problem of “end groove distortion,” a particular problem when an orchestral work ends loudly.

Audio quality is exemplary. String sound is nicely textured and reflects the participation of multiple musicians playing a single part, rather than one mega-violin. Winds are naturally recessed behind the strings and there’s a wonderful sense of the recording venues (two churches), especially when a musical silence follows a loud orchestral chord. Dynamics are good, though some may want more impact to timpani strokes.

And the performances? They probably won’t supplant an experienced listener’s favorites. But someone who had never heard a Beethoven symphony, yet knew of the music by its reputation, would quickly understand what all the fuss is about, intuiting the unique character of each work: the mastery of Classical-era form and structure of the first two symphonies; the revolutionary expansiveness of Eroica; the darkness-to-light catharsis of the Fifth; the rhythmic inevitability of Nos. 7 and 8; the message of noble human purpose that permeates the Ninth. The Polish Chamber Philharmonic Orchestra plays modern instruments yet there are plenty of nods to period practice. Beautiful woodwind playing abounds: listen, for example, to the initial oboe solo in the slow movement of No. 3. The small string section assures clean passagework and excellent string/wind balances. Wojciech Rajski takes an approach that’s sensitive but never fussy. Tempo choices are very well judged. There’s an intimate quality to these readings that is very involving.

When was the last time you sat down and, over the course of a few evenings, listened to a complete traversal of the Beethoven Nine from a single conductor and orchestra? It’s probably been a while. Especially for the analog devotee, I can’t imagine a more satisfying way to do so than with this TACET series.

Introducing the New Spendor A2 and A4 Loudspeakers