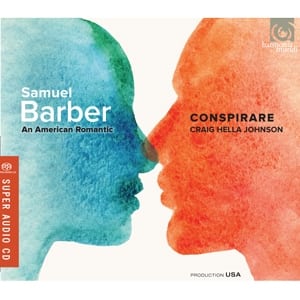 In these ten beautifully performed and recorded choral pieces, most of them about love and loss, the chamber choir Conspirare rejoices in Samuel Barber’s ardent but modern romanticism. Though Barber’s idiom, firmly tonal and melodic, was once deprecated by the avant-garde, this music can only have come from the mid-Twentieth Century. Try “A Stopwatch and an Ordnance Map,” about the death of a Civil War soldier, with its ominous tympani and dissonant clashes that chill to the bone. In a canny juxtaposition, next is “Sure on This Shining Night,” with its soothing melody and healing harmonies. There’s a good mix of less familiar (“To Be Sung on the Water”) and well known (Agnus Dei, a choral setting of the famous Adagio for Strings). “The Lovers” is premiered in a new arrangement by Robert Kyr for accompaniment by a small chamber orchestra. Written during a troubled period in the composer’s life, these Neruda settings are dark and anguished. In yet another effective juxtaposition, the anthemic “Easter Chorale” follows, bringing the program to a radiant conclusion. An important release of music that should be better known.