What’s in a model name? Well, sometimes not much at all when it’s merely an arbitrary numerical designation and a potential source of confusion for my slightly dyslexic mind. On the other hand, Ayon’s choice of model name strikes me as perfectly befitting a DAC, implying an unobtrusive delivery of the musical message by a digital device. The Stealth does just that by following a road less traveled. To be clear, the Stealth is more than just a DAC. Think line-level preamp offering two line-level inputs, an electronic volume control, as well as a world-class DAC.

Let’s start by taking a peak at the analog side of this DAC/pre. The massive aluminum chassis hides several vacuum tubes which are allowed to “breath” through a number of small grilles in the top plate and sides. Ayon is a firm believer in tube technology, and in particular triodes, for reasons that have to do with inherent linearity under minimal-or zero-feedback conditions, benign distortion and overload characteristics, and capacity for simple circuitry. The analog output stage is amplified in balanced fashion to allow for both RCA and XLR analog outputs. Each signal leg consists of a Russian 6H30 dual triode, connected in parallel, and operated as a pure, no-feedback, Class A voltage amplifier. That’s as purist as it gets, and Ayon is proud of the fact that there are only five components in each 6H30 signal path. This is a great-sounding tube, but if and when it fails, replacement as I discovered is a tedious task. Several weeks into the review process, one of the left channel 6H30s went bad. To remove the top panel requires loosening ten Allen-head screws through access holes in the bottom panel. As compensation, you get to ogle the beautiful hand-assembled internals.

All filament supplies are DC, and voltage levels are regulated. There is also an automatic tube soft-start during each turn-on cycle. Voltage gain can be toggled on the back panel between low-gain (2.5V) and high-gain (5V) settings. The power supply features two power transformers and a choke-coupled filter bank. I was surprised to learn that the Stealth is tube rectified. A quartet of Chinese 6Z4 rectifier tubes is connected as a bridge rectifier. This is not the cheapest scheme to implement, and the question that comes to mind is why tube rectifiers in a digital device? The answer, according to Ayon, is because this approach sounds more dynamic than any other means of rectification. That alone should inform you about Ayon’s commitment to the best technical solutions irrespective of cost. 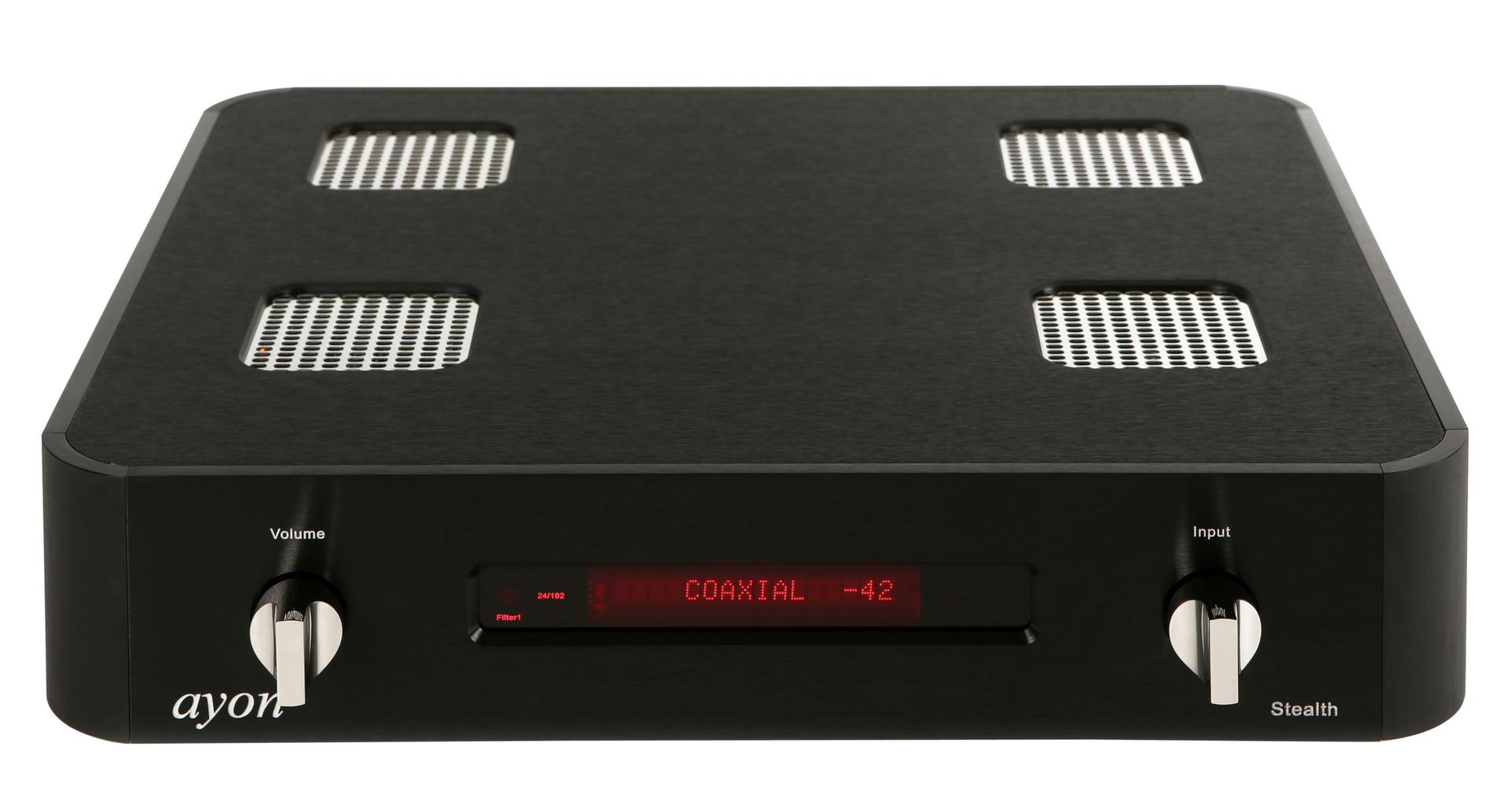 A Cirrus Logic CS8416 192kHz receiver chip decodes incoming PCM digital data from the coaxial, BNC, TosLink, I2S, and AES/ EBU inputs. An XMOS asynchronous USB input accommodates up to 24/192kHz PCM data. Indicators on the right side of the display show the incoming PCM frequency rate: 44.1, 48, 88.2, 96, 176.4, or 192kHz. Incoming SPDIF data can be upsampled to 24/192kHz. This feature can be “switched” on and off on the remote control. All sample-rate conversion is performed by a Burr-Brown SRC4193 asynchronous sample-rate converter timed by an external crystal clock oscillator operating at 24.575MHz. DSD inputs include two BNC (DSD-L and DSD-R) digital inputs and one BNC for word clock. In addition, the Stealth is also outfitted with one optional I2S DSD-over-PCM (DoP) digital input. I’m not that sophisticated a digital user. Hence, the scope of the review was limited to PCM data inputs, either PCM digital out from a Sony XA-5400ES SACD player or USB input from my MacBook Pro computer running Amarra V2.6 software.

The DAC chipset is the highly regarded ESS Sabre ES9018, a 32-bit audio DAC that features ultra-low distortion levels, a time-domain jitter eliminator, and integrated DSP functions. Customizable filter characteristics allow for user-programmable filters with custom roll-off slopes. The Filter button on the remote allows selection of either Filter 1 (slow roll-off) or Filter 2 (fast roll-off). Filter 1 is said to sound a bit smoother than Filter 2, which is characterized by Ayon as being a bit more analytical. I suspect that your ultimate preference would be system-dependent; however in the context of the ENIGMAcoustics Mythology M1 loudspeaker, I had a clear preference for Filter 2. I found it to be simply more resolving of microdynamic nuances and more incisive spatially. Filter 1 did sound smoother but at the cost of homogenizing spatial outlines and dissipating some dynamic tension. I also had a clear preference for upsampling 44.1kHz PCM data to 24/192kHz. Taken together, the resulting presentation was not only more spacious and better focused, but also dug a bit more deeply into the mix and retrieved more ambient information. It’s easy enough to click these buttons on the remote and experiment in real time to determine what sounds best in your system.

The volume control is based on the Texas Instruments (Burr-Brown Division) PGA2320 IC, a digitally controlled analog volume control designed specifically for professional and high-end consumer-audio applications. Internal operational amplifier stages are used to generate an attenuation/gain range of -95.5dB to 31.5dB. According to Ayon, this control is strictly used for analog signal attenuation with all of the gain being developed in the tube linestage. Thus, the display volume range is from 0 (max volume) to -60 (minimum volume) in 1dB steps. There is also a built-in balance function accessible from the remote that allows left-right channel attenuation in 1dB steps up to a total of 6dB.

I’ve run the Stealth directly into a power amp and have found its volume control to exhibit low coloration levels. I love its functionality; nevertheless, the question of how the PGA2320 compares to a conventional resistive potentiometer deserved an answer. It turns out that the Stealth’s volume control can be bypassed by switching over to Fixed Volume mode on the remote control, in which case the audio signal goes directly to the analog output stage. I connected the Stealth to the PrimaLuna DiaLogue Premium line preamplifier with its conventional Alps Blue Velvet motorized conductive-plastic potentiometer. I was then able to switch between Fixed and Variable volume modes on the Stealth and at equal volume levels try to discern any sonic difference with the PGA2320 in and out of the signal path. Although not necessarily a definite test, I did prefer listening with the Stealth in Fixed (2.5V) volume mode. There were improvements in spatial presentation (depth perspective and image outline separation). Additionally, the treble range was a bit purer sounding. These results suggest that the Stealth’s volume control does introduce a slight solid-state sonic signature.

It didn’t take me long to realize that I was in the company of a superb DAC, one that was free from annoying digital artifacts and that could flesh out tone colors with startling realism. One of the hardest things for a DAC to get right is violin overtones, especially on recordings that are less than perfect. Many DACs don’t react well to recording hot spots adding spurious grain, hash, and even sizzle to the reproduction. Not a pleasant phenomenon and one that had soured me on digital sound for many years. By contrast, the Stealth sailed right through recordings that had given me trouble in the past. Solo violin’s upper range was reproduced with proper levels of sheen and textural purity. The sound of massed strings, and in particular that of violins, the most numerous orchestral string instruments, represents another difficult challenge for any digital device, and one in which most CD players have scored poorly. The sound of massed violins should be layered and the spatial impression ought to float like a feather within the confines of the soundstage with plenty of tonal warmth and textural purity. And in these respects, the Stealth was able to put a smile on my face. Its performance at the frequency extremes bettered that of all previous DACs I’ve lived with, including the EAR-Yoshino DACute I reviewed in Issue 238. Treble transients were exquisitely refined and bass lines left nothing to be desired, being well defined and pitch-perfect.

The Stealth wasn’t just about tonal color fidelity and textural refinement. It lit a fire under the soundstage. Musical lines boogied with passion and drama. The dynamic range from loud to very loud was reproduced without hesitation or compression. A recording’s ambient information was readily discernible, as was low-level detail often fuzzed over by lesser DACs. I’m fussy about soprano voice and like to discern vibrato to the point of being able to count the number of pitch modulations per second. Not many divas out there can hit the ideal of seven cycles per second. With the Stealth in your system you’ll be able to resolve this sort of detail.

After auditioning numerous DACs over the years I have come to realize that a large slice of the sonic difference between individual units could be ascribed to the analog stage, and specifically tube versus solid-state designs. A tubed output stage appeared to present the soundstage more dimensionally. No matter how sophisticated the digital circuitry was, when mated to an op-amp buffer or gain stage, image outlines pancaked and depth perspective took a hit. And then there was the matter of textural grain. That’s the stuff that my auditory system generally finds to be indigestible. Some solid-state buffers had achieved a respectable level of smoothness, but it usually came at the cost of dynamic sterility. It seems to me that the best approach to defanging a DAC is to introduce tubes into the mix as early as possible. And that’s exactly what Ayon has done with the Stealth. It is perhaps a tad richer harmonically than the real thing, but it is far removed tonally from the sort of romantic, overly lush presentation that has been dubbed “vintage tube sound.” The Stealth is about tonal accuracy, but what you think of it will depend greatly on the associated amplifier and speakers. Mate it with reference-caliber gear and it will walk the line of neutrality.

In the pursuit of digital playback perfection, the Stealth ranks in the DAC elite. It’s all about the music and the Stealth delivers a superb musical experience. You could do a lot worse at a higher price point, but I doubt that you would do any better at its asking price. It’s a DAC that I could happily live with for years to come.