Once again, TAS Central packed up our cars and headed to Chicago for three days of the 2015 AXPONA experience. In this case, TAS Central consists of me (Andre Jennings), Julie Mullins, Jonathan Valin, and Greg Weaver. The fifth member of the team covering the show was Jim Hannon, who flew in from sunny California. With assignments allocated, in an attempt to cover as much as we can, we headed off to explore and find new and interesting products in our categories. My assignment, new and updated analog and digital sources, required a visit to every room of the show! Although I tried really hard to visit every room, I couldn’t accomplish the task over the three day period of AXPONA. With the Munich High End 2015 three weeks after AXPONA Chicago, new and updated product introductions in my categories were slim pickings.

Just like previous audio shows, there are good and not-so-good room configurations. Overall, the rooms were better sounding than last year’s AXPONA. Here is a snapshot of what I hear at this year’s AXPONA. 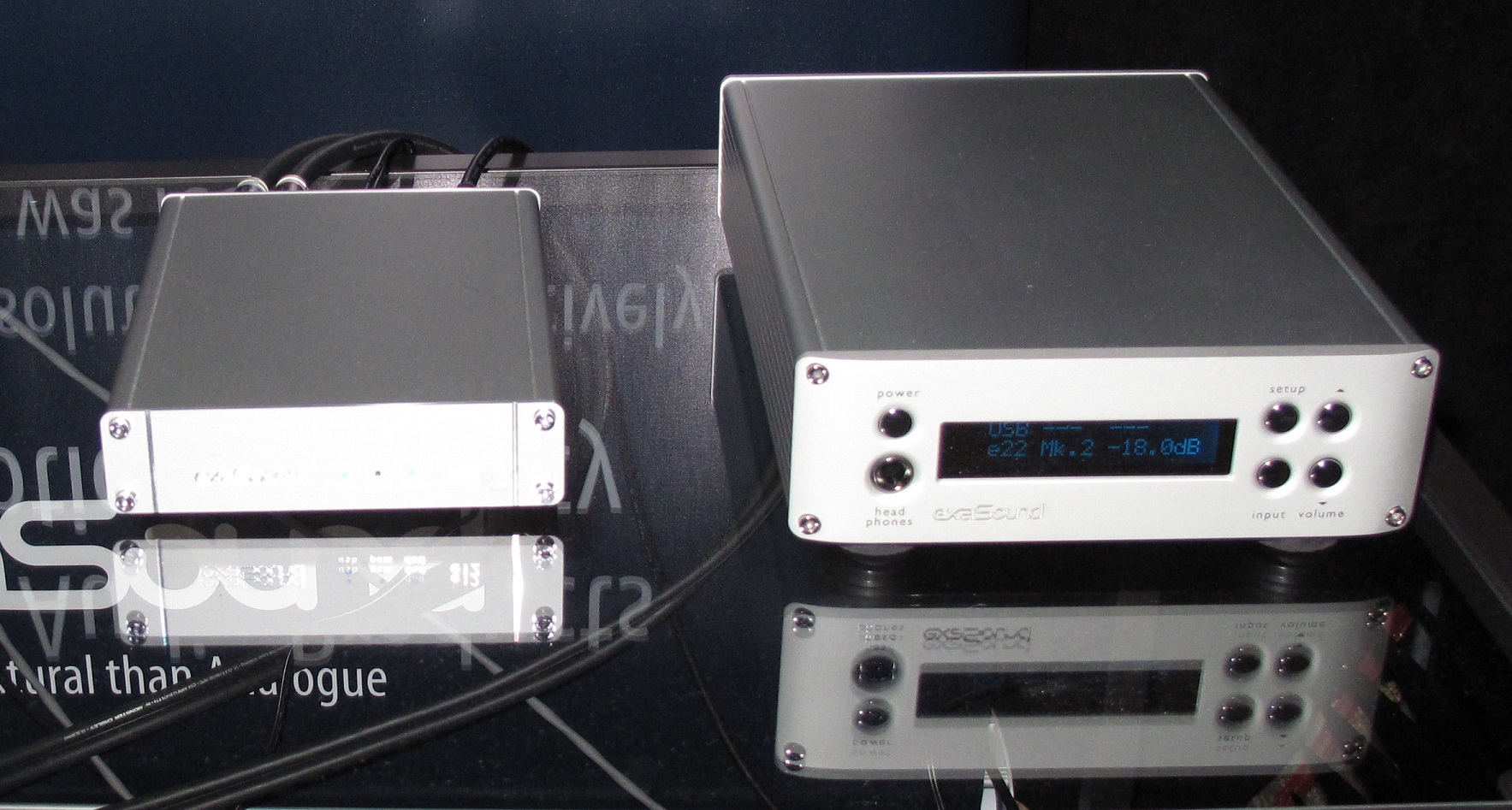 exaSound e12, e22 Mark II DAC
New and updated products from exaSound Audio Design playing high-resolution digital files in two- or four-channel systems produced some of the best sound at the show. The newly introduced e12 DAC ($1999) features as much of its technology as exaSound can fit into its smaller chassis. Some of these features include galvanic isolation of the USB-only input subsystem and DAC, a ZeroResolutionLoss digital volume control (with bypass mode), 32-bit PCM up to 192kHz, 32-bit DXD at 352.8kHz and 384kHz, DSD 256 and DoP 256, ESS SABRE32 ES9018S DAC (four DAC channels per side), seven linear power-conditioning stages, three precision oscillators, and gold-plated RCA outputs. The e22 Mark II adds a high-current headphone output, SPDIF (RCA and optical) inputs, a higher-precision master clock, three additional stages of linear power conditioning, an Apple remote, a 12V trigger, and XLR outputs. These two-channel DACs (e12 and e22 Mark II) were feeding a Pass Labs X250.8 ($9600) amplifier driving Magnepan 3.7i ($5,495) speakers. Listening to a DSD 256 back-to-back comparison of both DACs demonstrated their solid imaging and above-average soundstaging. I gave an edge to the more costly e22 Mark II for its slightly more organic and open sound, though the slightly softer presentation of the more affordable e12 wasn’t far behind. If the potential owner doesn’t need the XLR output option, the e12 may be just the right DAC to handle all formats. 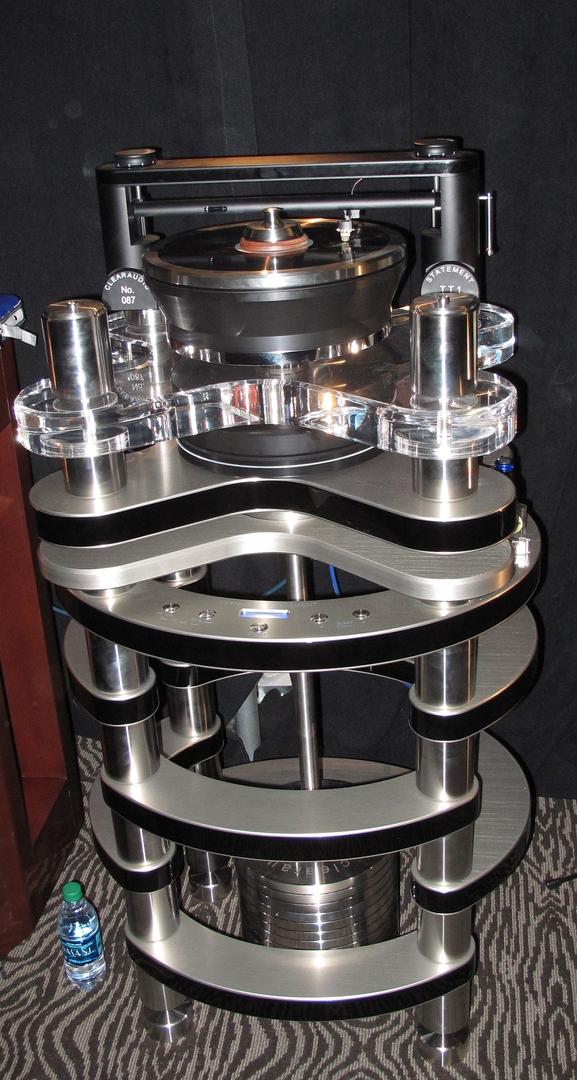 Clearaudio Statement V2 turntable (with TT1 Tangential Tonearm and Goldfinger Statement Cartridge)
Although on static display at CES, the Statement V2 turntable made its operational debut at AXPONA 2015. This state-of-the-art analog front end, weighing in north of 750 pounds, is the apex of Clearaudio’s product offerings, with a price ($200,000 for the kit) to match. Some of the many features of this analog package include an oil-damped, gimbal-mounted chassis (self-leveled by a 176-pound pendulum), microprocessor speed control, and a floating platter implemented via a magnetic bearing. The Clearaudio was paired with an Aesthetix Rhea Eclipse ($13,000) phonostage, Pass Labs Xs ($38,000) preamp, Aesthetix Atlas monoblock amplifiers ($16,000/pr.), Magico Q7 MkII ($229,000) loudspeakers, and a Magico QSub-18 ($36,000) powered subwoofer. The system was linked with Kubala-Sosna Elation cables and supported by Harmonic Resolution Systems MXR rack and amp stands. The sound of the system was ultra-detailed with a more forward, midrange-to-high-frequency emphasis, though the bass sounded more natural on Saturday and Sunday without the QSub-18 in the system. 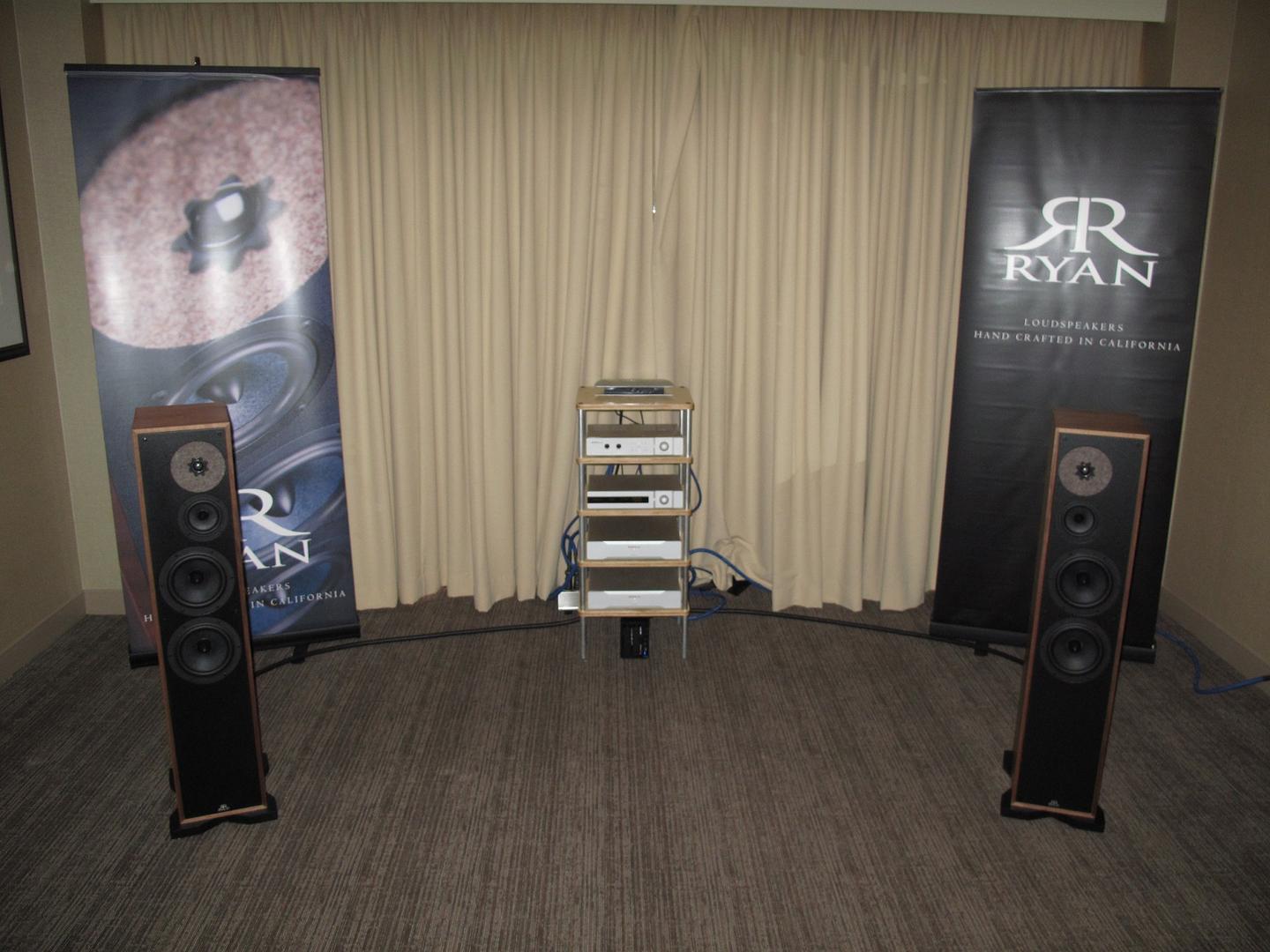 Auralic Aries Wireless Streaming Bridge
Serving as a bridge, the Auralic Aries incorporates dual-band high-speed WiFi, Gigabit Ethernet, and USB 2.0 input connectivity. The output of the Aries gives USB DACs access to high-resolution streaming and data from servers. The Aries ($1599) is capable of delivering PCM from 44.1kHz all the way to DXD 384kHz as well as DSD and double-rate DSD. Listening to an all-Auralic system comprising the Aries wireless streaming bridge, the Vega digital audio processor ($3499), the Taurus preamp ($2099), the Merak monoblock amplifiers ($2499 each) and the Ryan R630 ($5000) loudspeakers was enjoyable. A double-DSD track of Eric Bibb sounded pleasant with no edge I could discern.

Technics ST-C700 Network Audio Player
The ST-C700 ($1099) Network Audio Player is a smaller-footprint device capable of playing MP3; WMA; ALAC and AAC files up to 96kHz; WAV, FLAC, and AIFF files up to 192kHz; and DSD 64 and DSD 128 files. The inputs supported include, USB, Ethernet, Airplay, Bluetooth, and NFC. When coupled with the companion SU-C700 integrated amplifier ($1599) and SB-C700 speaker system($1699), the ST-C700 makes a complete digital playback system that may be of interest to many of our budget-minded readers. 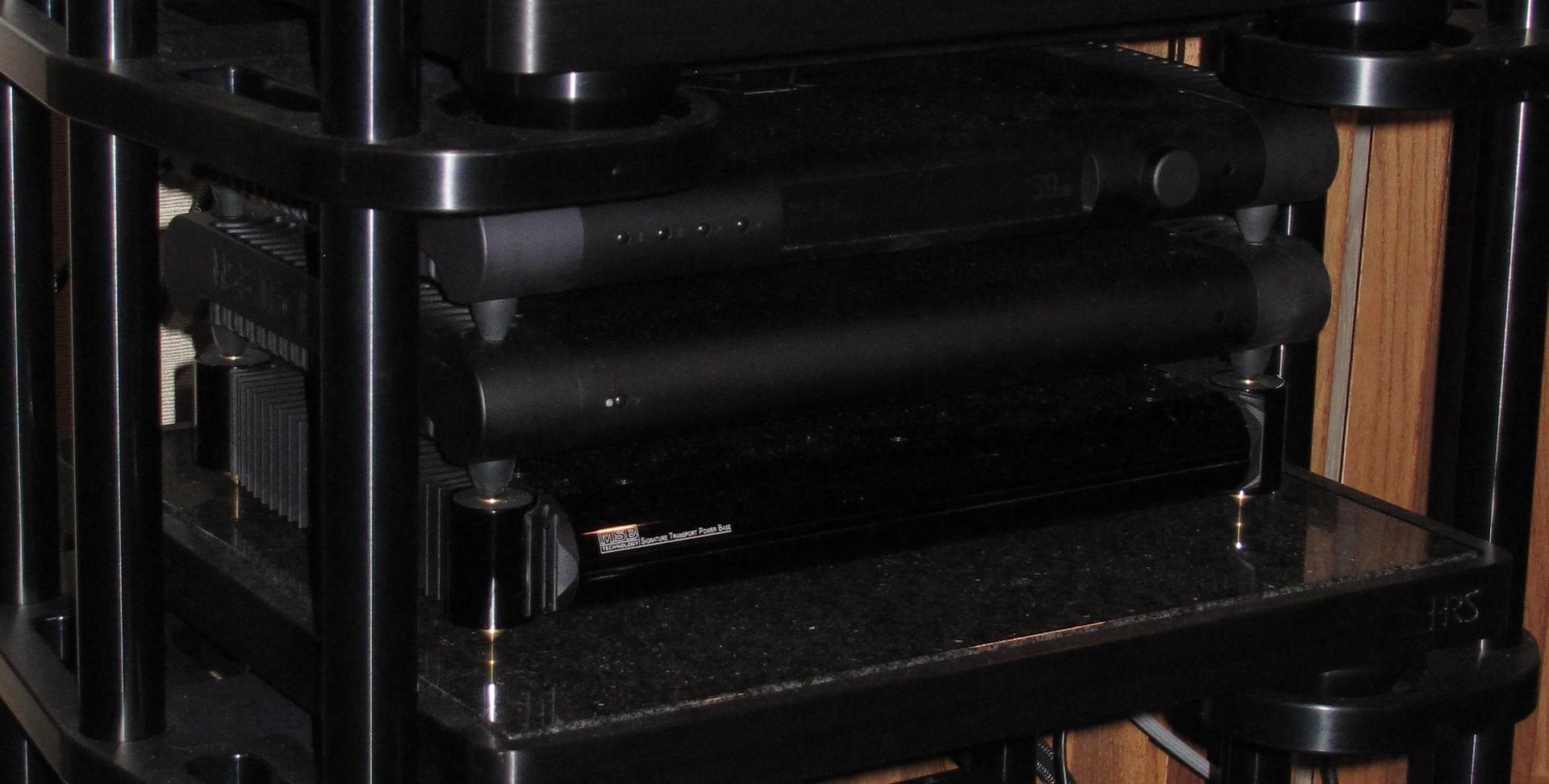 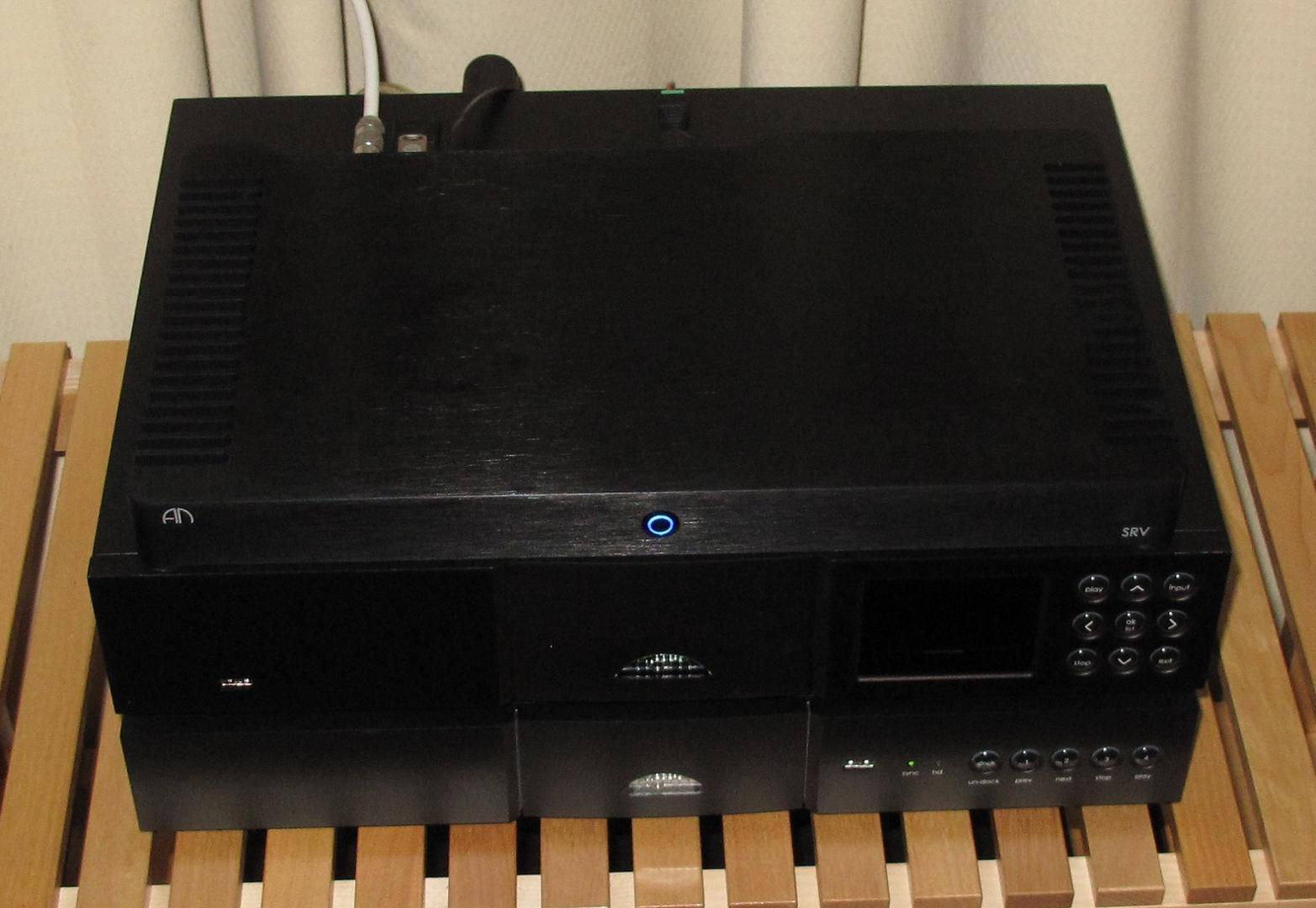 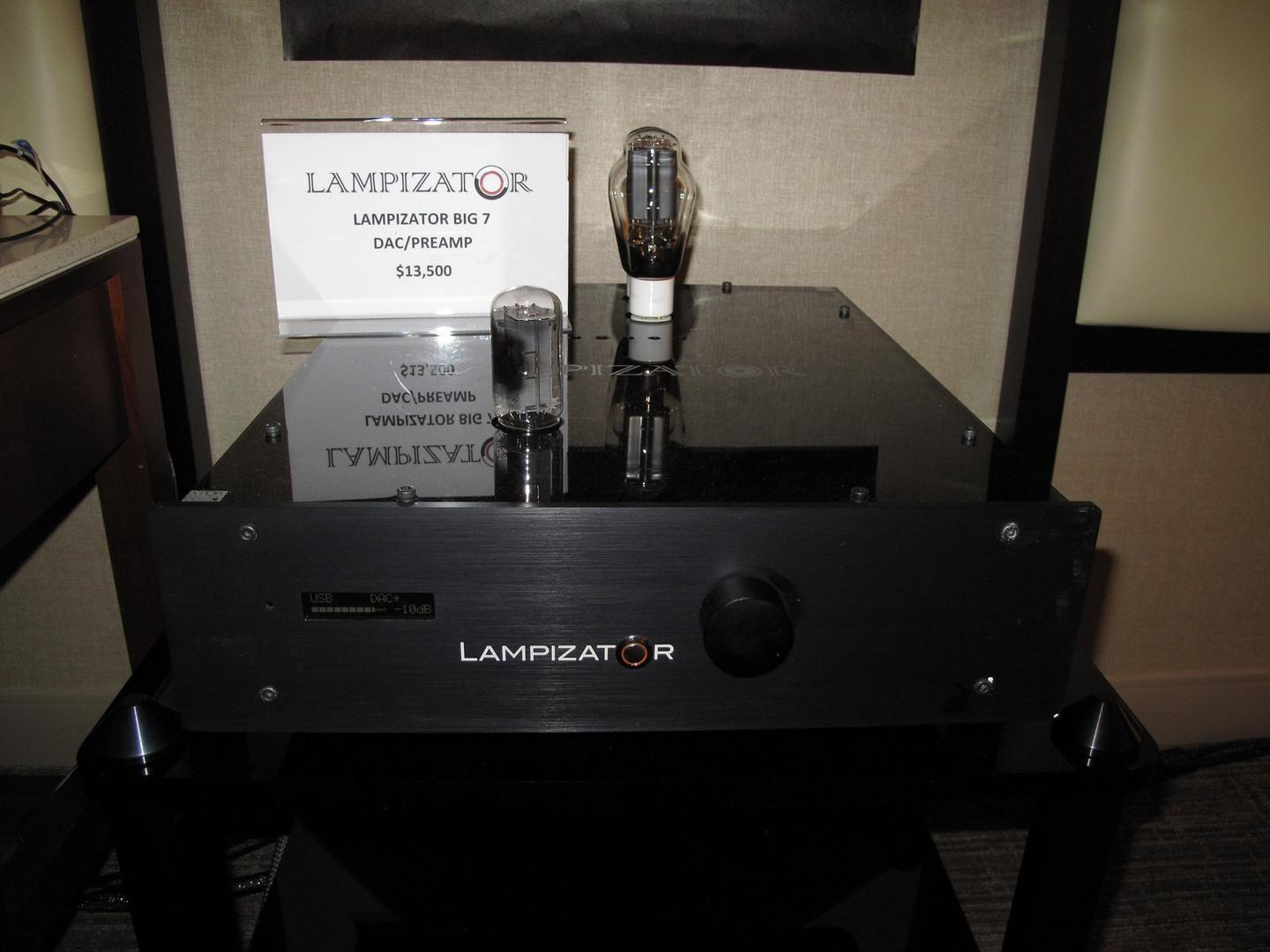 The LampizatOr Big 7 DAC/preamp ($13,500 as shown) was used to decode digital files and feed the Wells Audio Innomorata ($15,000) amp, powering a pair of Gingko Audio Claravu 7 Mk.3 ($9000) speakers. The supporting accessories were a Gingko Audio equipment rack, Wells Audio power conditioner, and DanaCable cabling. The Big 7 features directly heated triode 300B tubes in the output stage without any other components between the valves and the DAC output. In addition to this, the Big 7 is somewhat customizable (output tube, capacitor types, volume control, additional analog input, DSD options, etc.) when ordered. A sparse Lyle Lovett tune sounded somewhat pleasing, while a cut from Steely Dan was good but less full in the lower octaves than I’m used to hearing. Overall, the Big 7 with its à la carte configuration will no doubt attract those who like to customize their orders.

The D150 (approximately $3000) Digital Preamplifier was doing source-decoding duties for a full stack of McIntosh Labs electronics (MCT450 SACD/CD transport, MB100 bridge, C2500 tube preamplifier, MC1.2KW mono amplifiers, and MPC1500 power controller) powering MartinLogan Neolith speakers. All cabling was provided by AudioQuest. The D150 supports up to 32-bit/384kHz PCM (including DXD 352.8kHz and DXD 384kHz), as well as DSD 64 and DSD 128 via its USB interface. Additionally 24-bit/192kHz PCM is supported via coax and optical interfaces. On a Dead Can Dance track, the system sounded clear and detailed.

Meridian Audio put on a demonstration of MQA audio playback using the DSP7200 Digital Active Loudspeaker ($46,000), Control 15 source, and 818V2 Reference Audio Core. Upon entering the demo, I first heard the system playing a PCM file streamed over TIDAL. The track was not a familiar one, but the sound of Christian McBride seemed to be in order with what I’ve heard from other music played by him. The next couple songs were played back using MQA. One was a Bob Dylan number and the other was an older recording of Frank Sinatra. Again, these were unfamiliar tracks, so it was difficult to make any valid observations. But given what I’ve heard listening to streaming music vis-à-vis MQA-encoded file at CES 2015, I’d say MQA-encoded music is superior to standard compressed music streaming.

Playback Designs was showing its IPS-3 Integrated Playback System ($13,000), which is an all-in-one USB DAC/amplifier. On the digital side of things, the products of Playback Designs occupy rare air (along with those of PS Audio and Chord) due to the use of FPGA hardware that is reconfigurable via firmware updates. The IPS-3 has a 130W output, two RCA analog inputs, an XLR analog input, accepts PCM up to 24-bit/192kHz over AES/EBU or coax, and PCM up to 24-bit/384kHz (and up to DSD 256) over USB. 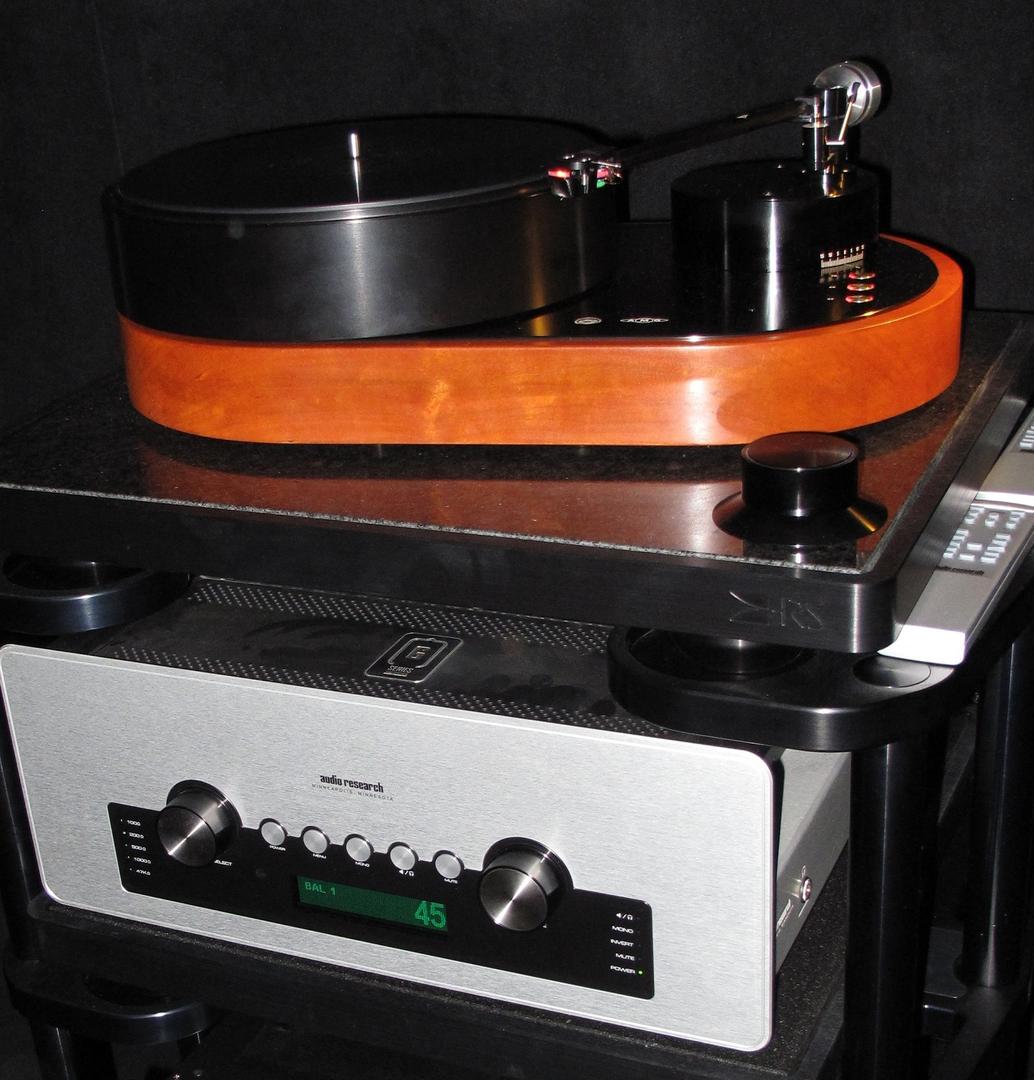 DS Audio’s DS-W1 “Nightrider” ($8500) optical cartridge system deciphered the grooves while mounted to an AMG Viella turntable with 12J2 tonearm ($17,500). The Audio Research GS Pre ($15,000) and GS-150 ($20,000) stereo amplifier powered the Sonus faber Lilium ($70,000) speakers using Kubala-Sosna Elation system cables and Harmonic Resolution Systems SXR racks. The music produced a deep soundstage that was big, full, and warm with an emphasis toward the lower midrange through the bass. All instruments and vocals had more body and somewhat less energy through the upper midrange. The result was an abundance of easy musical listening.

Most Significant Product Introduction: The exaSound e12 is an affordable all-format DAC.

Most Significant Trend: Many rooms were taking the easy road with front-ends that omitted analog playback sources at AXPONA 2015.

Most Coveted Product: The e22 Mark II DAC from exaSound.