AXPONA (aka AudioCon) has become one of the most significant audio tradeshows in the United States, with an increasing number of manufacturers demoing their audio wares there. It also features several live music events, and engaging seminars and panel discussions. While most companies typically showcase their new product releases at either the Munich or CES shows, there were several noteworthy debuts in Chicago. However, since every active room utilizes cables, power products, and accessories, it is virtually impossible to cover them all. With apologies to those I might have missed, there were some impressive introductions in my large category. Several manufacturers demonstrated the sonic impact of their cables, power products, and accessories in live demos so listeners could hear the sonic effects with and without their products. A new entrant, Resolution Acoustics, went so far as to have two identical systems playing in two adjoining rooms—one untreated vs. one with the company’s acoustical products.

One phenomenon that occurs at all audio shows, but was particularly noticeable at AXPONA 2015, was how significantly the sound improved in many (but not all) rooms during the course of the show. Systems do need to settle, but there was also some major system tweaking throughout the show, most of it for the good. For example, the Quintessence Audio room featuring Magico Q7 MkII speakers, Aesthetix and Pass electronics, and a Clearaudio Statement V2 turntable, TT1 tonearm, and Goldfinger Statement cartridge, was dramatically better on the last day of the show than on the first, vaulting it to one of the best sounds at AXPONA. Consequently, most of my “Best of” recommendations were auditioned on the show’s final day. 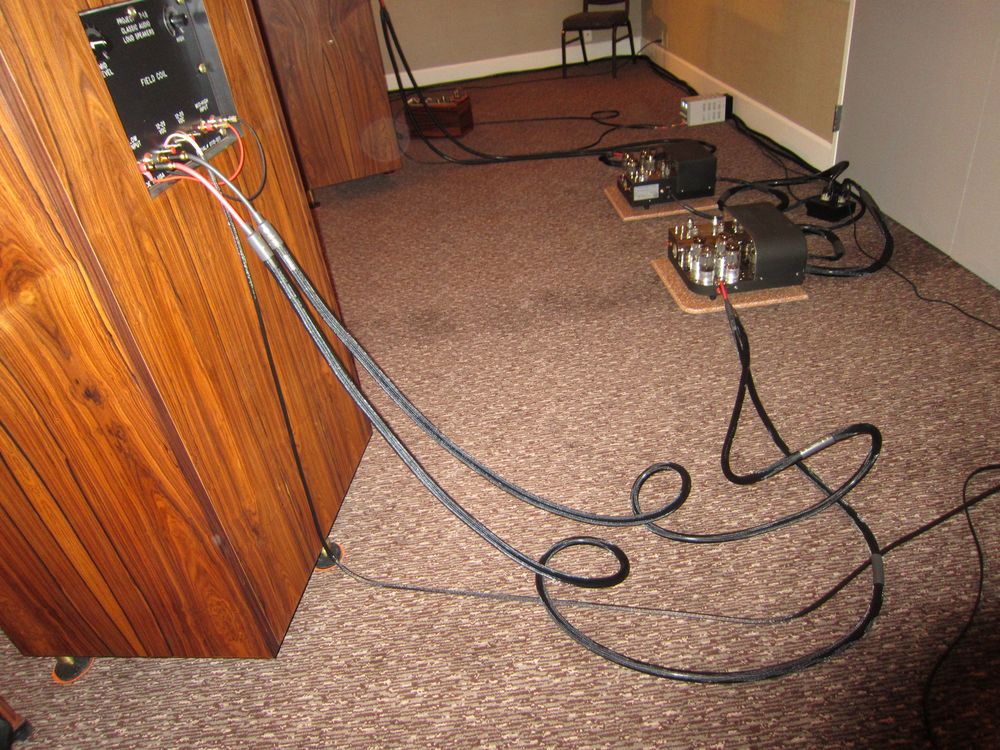 Purist Audio Neptune and Luminist Revision Cables
Purist Audio has quietly come a long way since the introduction of its first liquid-enclosed cable, the Aqueous (nicknamed by audiophiles as the Texas Water Cable). Ex-NASA engineer Jim Aud and his team have advanced their thinking, culminating in a reference fluid-shielded cable—the Neptune. It is the newest addition to Purist Audio Design’s Luminist Revision series, developed partly in response to customer feedback to make the cables more flexible and user-friendly, while also increasing their performance. The Neptune comes in a four-cable set with positive and negative signals separated. The fluid shields the 7AWG bundle of fine single-crystal-copper strands from RF, EMI, and vibration. The shielding helped produce a huge soundstage with explosive dynamics in a system with Atma-Sphere electronics and Classic Audio loudspeakers. One of the most exhilarating sounding (and looking) exhibits at this year’s event was from retailer The Voice That Is. In The Voice That Is room, Purist Audio Design’s Luminist 25th Anniversary ($55,000) cables were mated with Tidal electronics and its new Contriva G2 speakers. With music sourced from the Aurrender W20 Reference music server and Bricasti M1 DAC, and power supplied by the highly effective Silver Circle Audio TCHAIK 6 power conditioner, the finely detailed sound emerged from a very deep soundstage. The room was definitely a candidate for Best of Show. 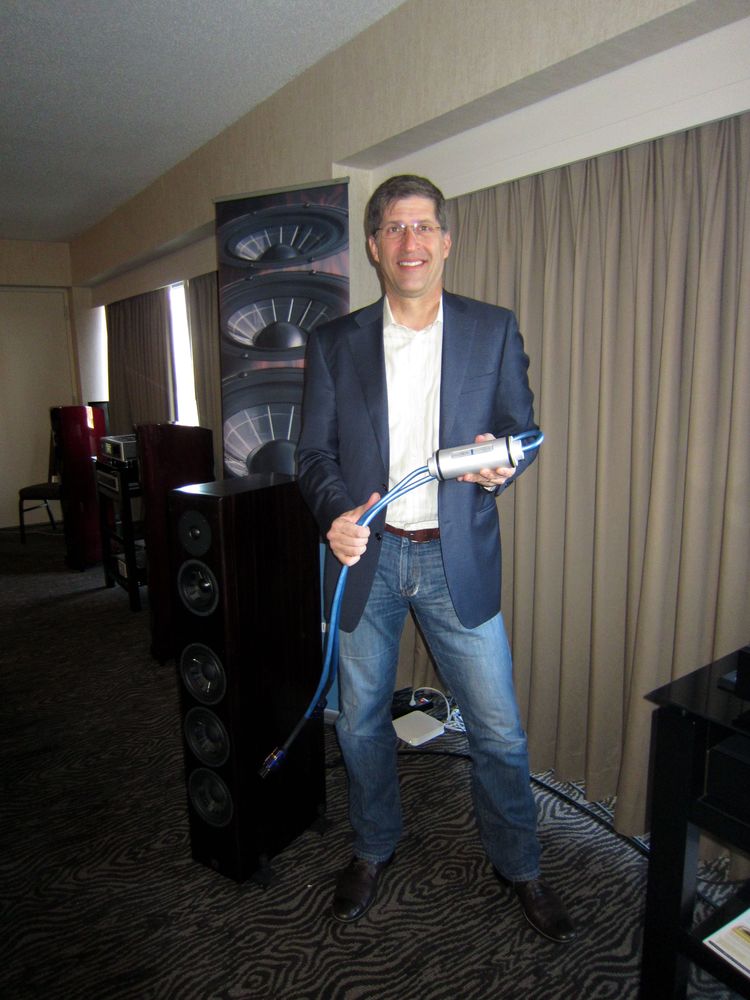 Iso-Tek EVO3 Syncro (Special Edition) DC Blocker
One of the banes of many high-performance audio systems is transformer hum. It alone can insidiously destroy the illusion of a live performance. Iso-tek has devised an active solution that effectively blocks invading DC by rebalancing the mains sinewave, virtually eliminating transformer hum. Swapping the EVO3 Syncro into a system with Primare I32 and CD32 electronics and Vienna Acoustics’ new (and quite lovely) Beethoven Concert Grand Symphony loudspeakers lowered the noise floor significantly, producing more clarity and resolution while widening dynamic swings. I’ve got to try one of these! 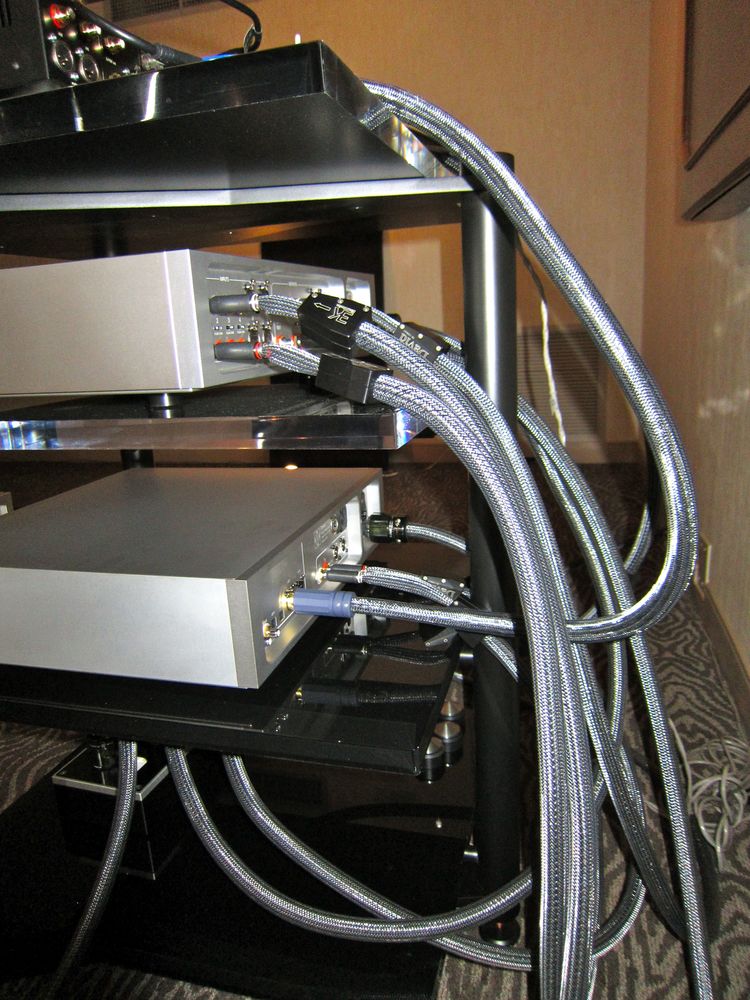 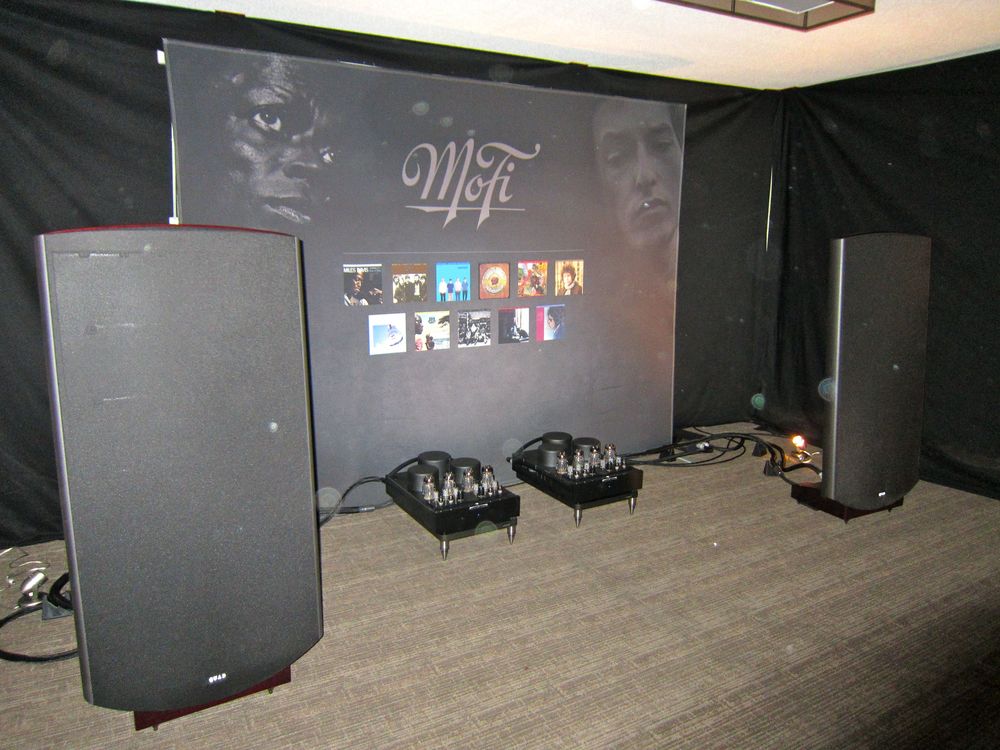 Kind of Blue MoFi Reissue
I know what you’re thinking—do we need another reissue of Kind of Blue? Well, this one is getting the full MoFi treatment on 45 RPM with high-quality vinyl in a boxed set. If the test pressing is indicative, this one is likely to be the best of the bunch. On a glorious system with the new Quad ESL-2912 speakers, BAT Rex 2 electronics, Avid Pulsare II phonostage, and an Avid Acutus Reference turntable, SME 309 tonearm, and Koetsu Black cartridge, the soundstage was expansive, with far more detail than on my original Columbia recording (and I’m using original Quads!). Of course, instruments were reproduced with beautiful natural timbre, a hallmark of the Quads. 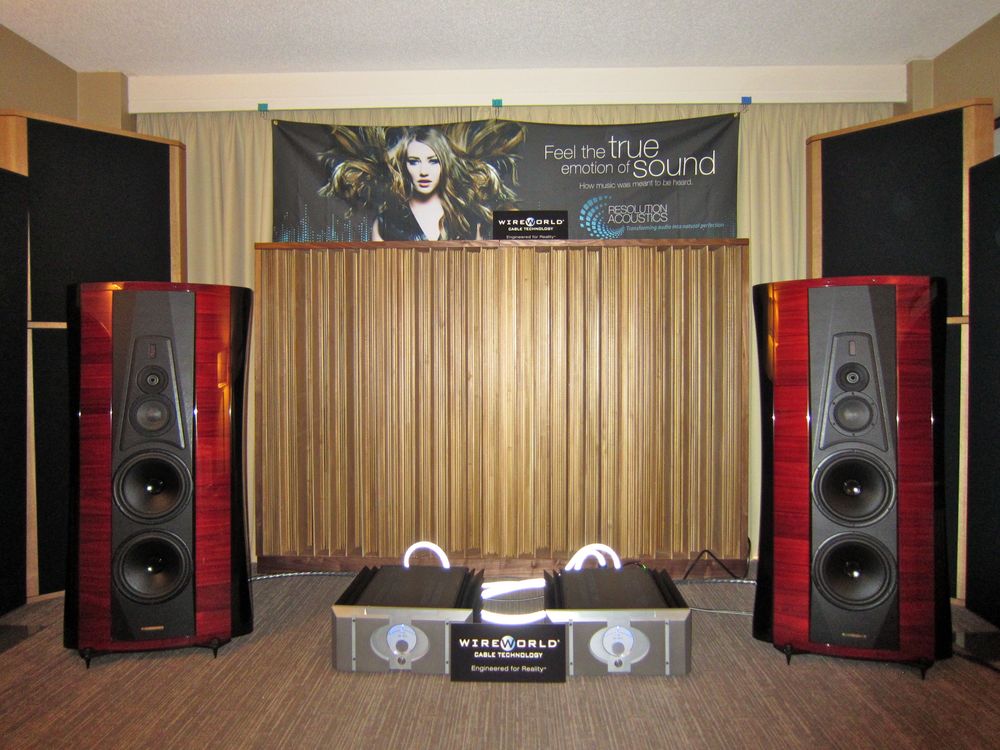 Resolution Acoustics
This patent-pending diffusion and absorption system effectively took the room out of the equation when compared with an untreated room with an identical system (Sonus faber Stradivari speakers, Pass Labs electronics, Meitner MA-1 DAC, and Wireworld’s flagship Platinum and Silver Eclipse cables). The Resolution Acoustics’ solution leaves the directed wave from the speaker dominant while weakening the reflected waves. I thought there was a huge difference between the rooms, with far greater clarity and focus, as well as no bass boom or smear in the acoustically treated room. 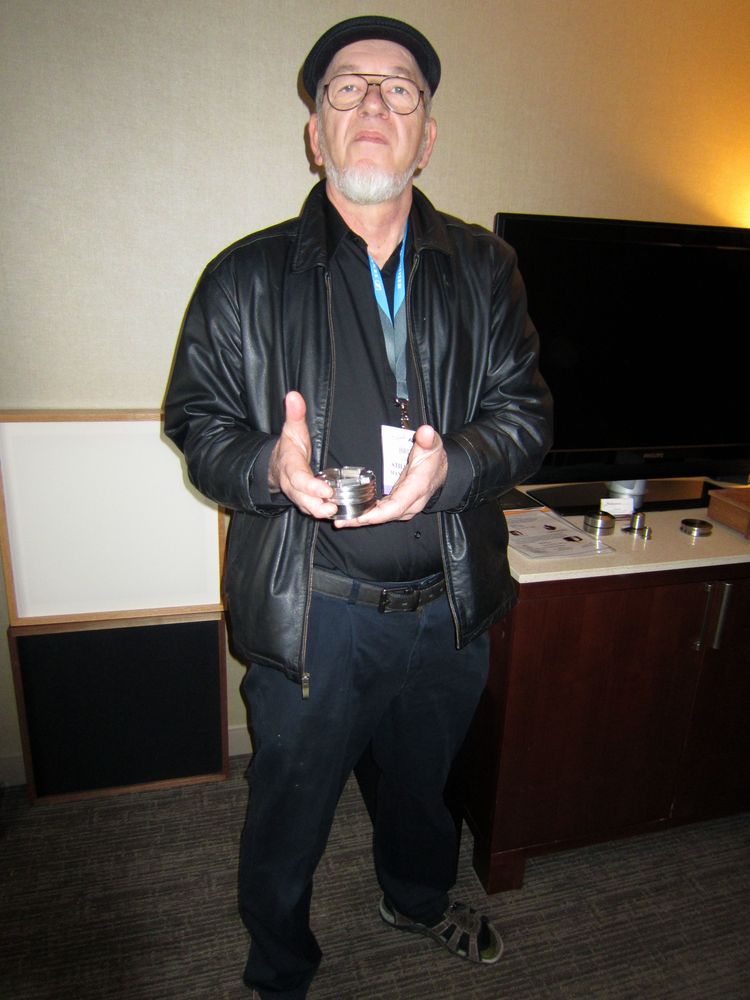 This new addition to the Stillpoints Ultra Series ($939 with base) is optimized for direct contact with electronic chassis, effectively eliminating all the micro-vibrations above 20kHz. In a comparison demo, adding the Ultra 6 footers significantly increased resolution and clarity, and adding Stillpoint’s Aperture acoustic panels ($650/each or an extra $225 with a printed high-res photo) produced even better imaging. These devices were also used to great effect by retailer “The Voice That Is” with Ultra 6 footers under each Tidal Impulse mono amplifier. These Stillpoints undoubtedly contributed to that system’s terrific dimensionality, midrange resolution, and image depth. It was one of the best sounds of the show.

This $4800 power distribution device features point-to-point wiring with seven single outlets, each wired directly. In GTT’s impressive system with all Kubala-Sosna Elation cables, YG’s new Carmel 2 speakers, a Kronos Limited Edition Pro turntable, and Audionet electronics, the sound was bigger and more dynamic than what I’d expect from that sized loudspeaker, with stunning clarity and transient speed. There certainly was no limiting of dynamics using the XPander!

Although the official launch of this unassuming passive device (price TBA) that gobbles up low-frequency standing waves is slated for the Munich Show, a production unit was quietly put to great use in the MBL room along with several other Synergistic Research products, including its Atmosphere Level 4 Series cables, Element Series actively shielded AC cords, Power Cell 10 UEF with FEQ Power Cell Equalizer, and HFTs (High-Frequency Transducers). The Black Box effectively helped control bass resonances, and the outstanding MBL system (MBL 111F speakers, 6010 D preamp, 9008 A monoblocks) produced a highly-compelling sound with lots of presence and air, terrific fine detail retrieval and dynamic explosiveness, and solid and articulate bass extension into the low 20Hz range. With an UHA-Phase 12 OPS tape player serving as an analog front end, the soundstage was wide and deep, with great focus. Playing back a stunning Wilson Audiophile demo tape track on the last day of the show, this system won my vote for “Best Sound.” 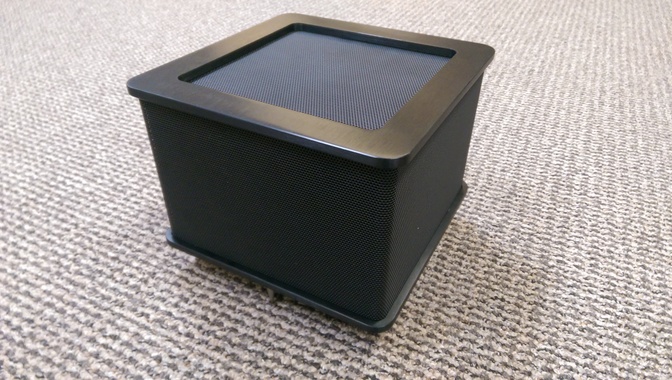 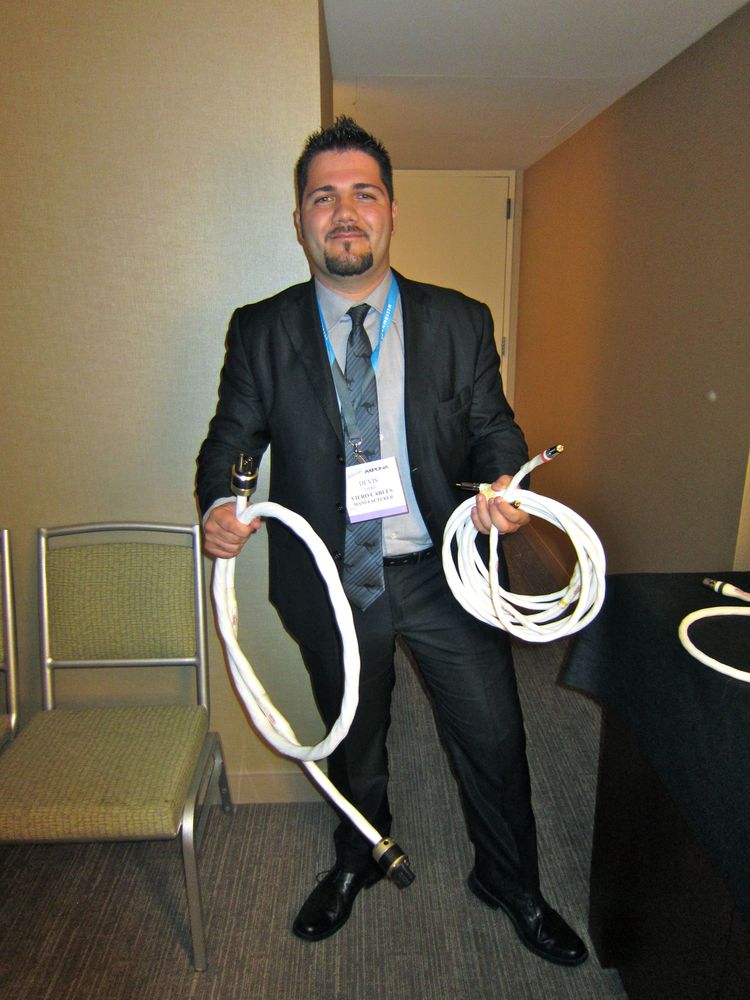 Best Sound (for the money): The Magnepan 3.7i driven by Pass Labs X250.8 with an exaSound e12 DAC put many more costly systems to shame. It sounds more like the real thing than you’d imagine.

Most Significant Product Introduction: Quad ESL-2912 with upgraded delay-line electronics. At long last, this incredible loudspeaker has a US distributor: MoFi Distribution! The company is now distributing Koetsu cartridges, too!

Most Coveted Product: Wish I were one of the few to own the limited-edition Magico M Project speakers. The sound was simply breathtaking in the Hanson Audio room (with system elements from Octave/dCS/Clearaudio/Nordost/Critical Mass).