Nearly halfway through covering the analog side of AXPONA, I switched hats to covering digital sources. You may ask yourself, why is the person versed in our hobby about analog covering digital? Well that is a good question. First, I’m pinch-hitting for my colleague, Steven Stone, who wasn’t available at the time of the show (be well, my friend). Second, I’m still looking for a permanent digital playback solution to complement my analog sources (vinyl and tape), and this exploration allows a brief look at what’s currently available. Third, my professional engineering career has included designing electronic hardware (consumer, industrial, military, and space) in areas from concept to finished product—including the use of microprocessors, DSPs, FPGAs, CPLDs, and their interfaces. In short, the “analog guy” has some knowledge about the internals of these machines. As usual, if I’ve missed a particular item, please keep in mind the show is large and time was short. Let’s get started, shall we? 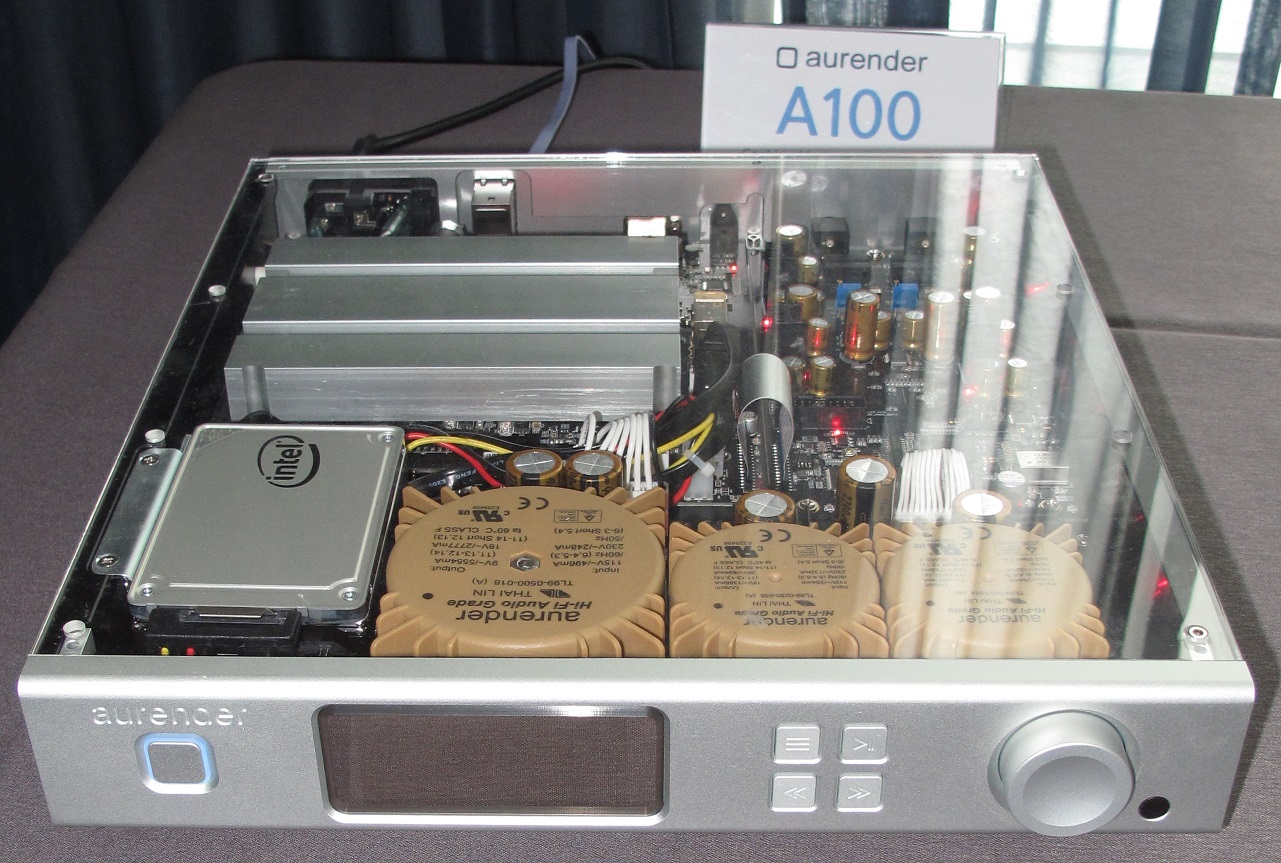 Aurender introduced two new products that straddle either side of its A10 music server/streamer/player ($5500). The lower-cost A100 ($3900) carries most of the features of the A10 except it has 2TB of storage (4TB in the A10), a single DAC (dual-mono in the A10), and single-ended RCA outputs (single-ended RCA and balanced XLR in the A10). The A100 also has a smaller footprint than the A10. Overall, if the storage and balanced output features are not needed, the Aurender A100 is a good value all-in-one music server/streamer/DAC with full-MQA decoding capability. The A30 ($18,000) adds a host of features above what the A10 offers, including new analog output level selections, higher maximum sample rates (768kHz and native DSD up to 256), an oven-controlled oscillator (OCXO), headphone outputs with three different connections, a TEAC CD-ROM slot (and automated unattended ripping support for the third-party-sourced Arconova Nimble), a dual-mono configuration (the new AKM AK4497 DAC and linear power supplies), safe shutdown UPS via a super-capacitor circuit, a much larger color LCD display, quad-core CPU, 480GB SSD, 8GB memory, 10TB HDD, and a few more additional features.

Lumin showed the new T2 network music player ($4500) in an all-new chassis with new internal dual power supply (split for digital and analog functions). The T2 also has the ESS9028PRO DAC in a dual-mono configuration supporting up to 384kHz PCM and DSD up to 512. Lumin X1 ($14,000) users may be interested in a new software update that allows the flagship X1 to gain multi-room control, which can operate via the wired Ethernet or optical network connection (but not both at the same time). This feature, currently in beta testing, will be available via a software update later in 2019. 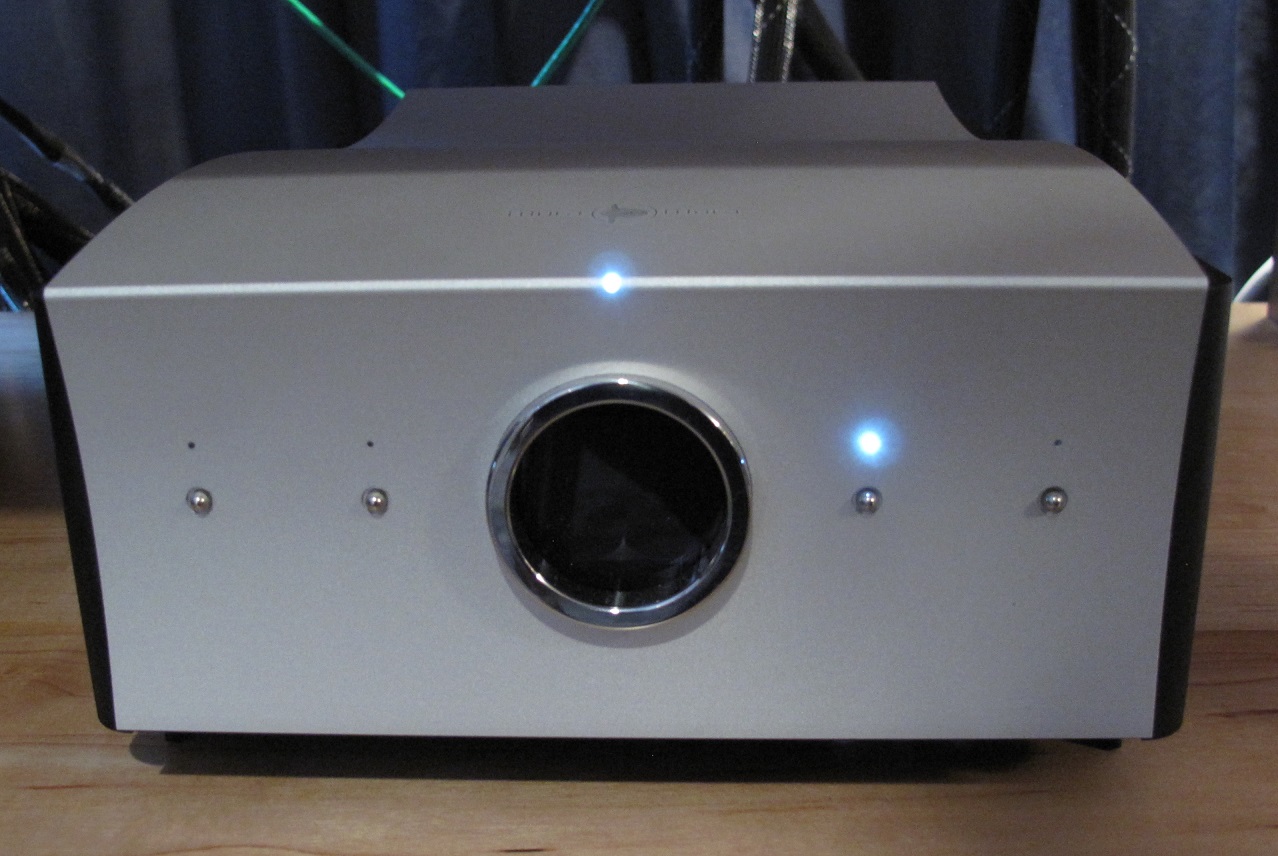 The Mola Mola Tambaqui DAC ($13,400) was playing in the GTT Audio room. The Tambaqui is a pulse-width-modulated (PWM) DAC with a discrete analog FIR filter output stage; it supports multiple inputs (USB, AES, SPDIF, optical, Ethernet), is Roon/DLNA-ready, and uses three SHARC processors to handle core signal processing. Listening to various music tracks I heard a good level of delicate detail, transient speed (instrumental attack), and image separation. Beyond that, I couldn’t identify much else related to the Tambaqui in that system (partly because the speakers were new to me: the $32,800 YG Vantages). What I heard sounded very promising. 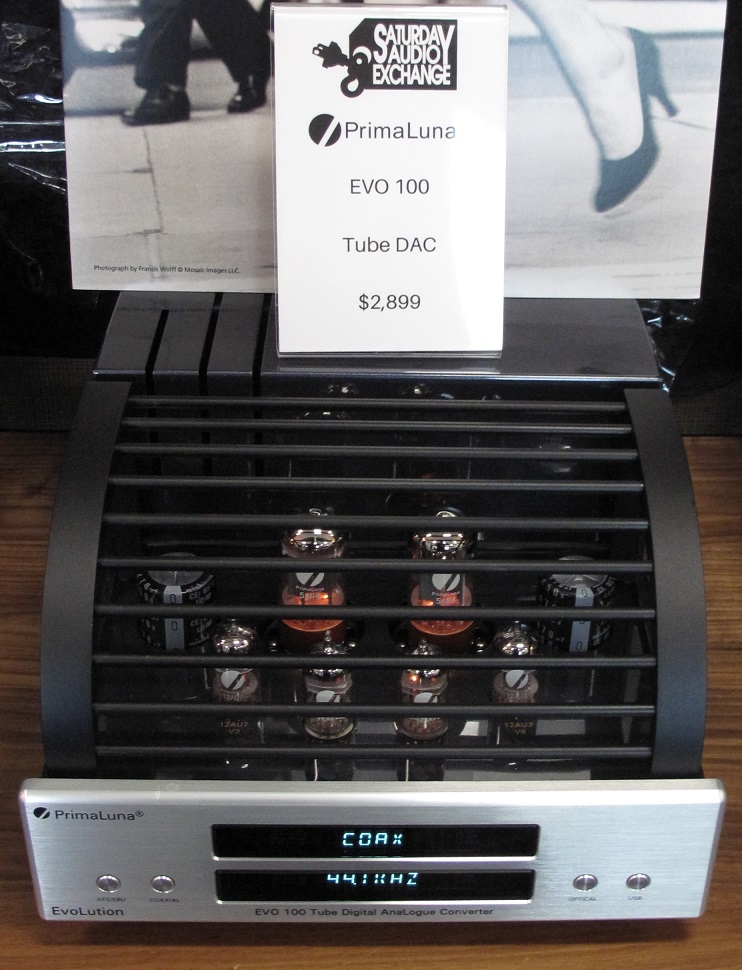 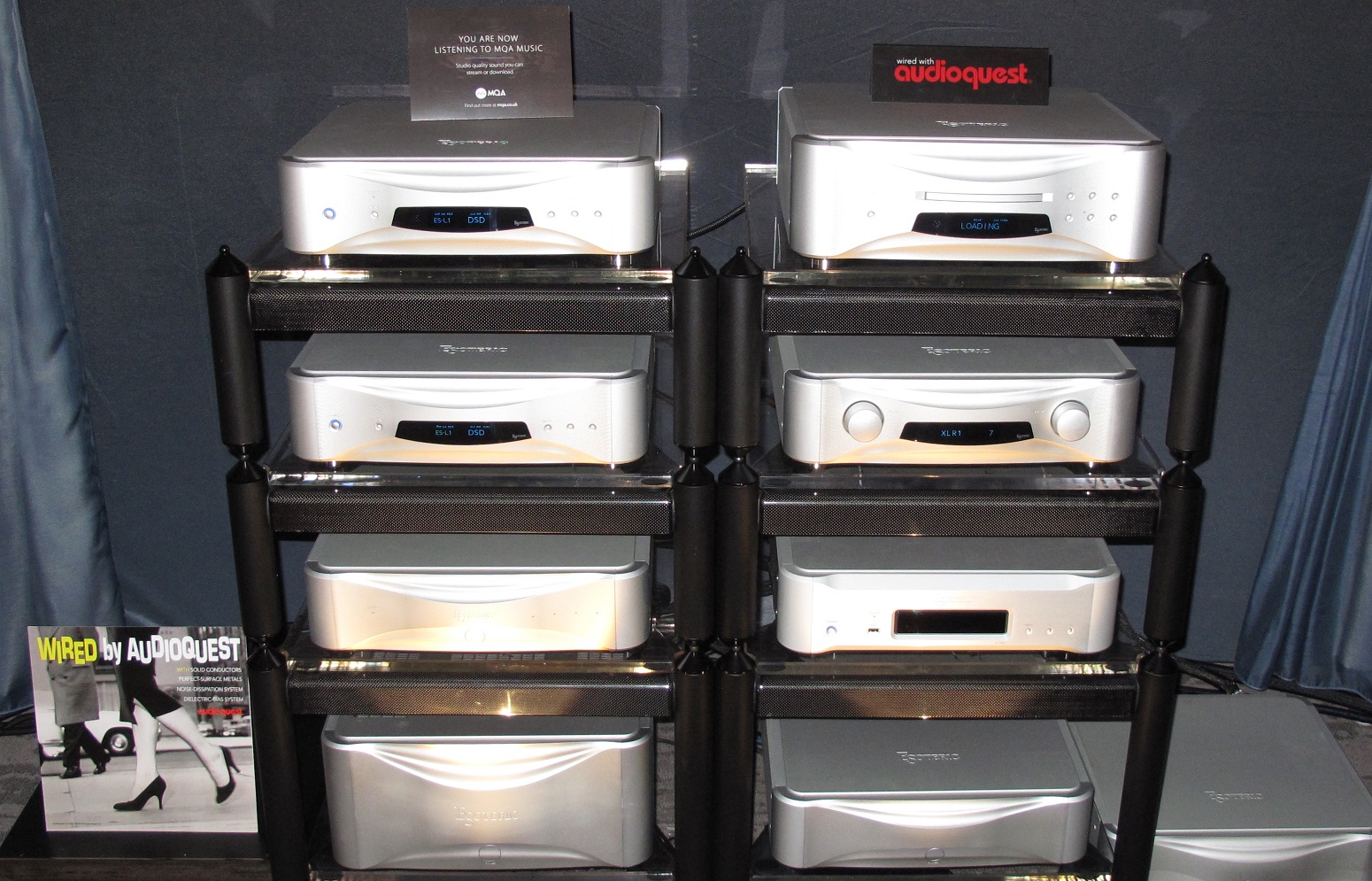 Esoteric introduced the new P1X transport ($50,000) and D1X Monoblock DACs ($50,000 pr.) in an all-Esoteric system. The P1X transport has a new VRDS-ATLAS SACD transport mechanism in addition to more features. The D1X monoblock DACs are Esoteric’s first to feature its new Master Sound Discrete DAC (chip-less, FPGA-based) with internal 64-bit processing resolution. The Esoteric system feeding Avantgarde Acoustic Uno XD ($32,000) speakers with AudioQuest cables sounded excellent reproducing a track from Friday Night in San Francisco, capturing the speed and separation of the guitar playing without making it sound like a mush of individuals stepping on each other. Offset by a track from Dave’s True Story, the Esoteric components revealed lovely, well-portrayed female vocals and good dynamic transitions on voice and instruments. I’d say it was a good showing.

The Innuos Statement music server ($14,400 as configured) was shown next to the Innuos ZENith music server ($4899 as configured) in an all-Nagra system with speakers from YG Acoustics. The Statement server features an OCXO for re-clocking the USB and Ethernet interfaces, custom-designed USB interface board with dedicated 5-volt power, eight independent power supply rails, EMI-optimized motherboard, and a separate AC/DC power supply chassis for improved transformer and EMI isolation. A brief demonstration revealed the Statement server to edge-out the already good sounding ZENith in detail retrieval, bass solidity, and overall openness of the music presentation on “Blue Spanish Sky” from Chris Isaak’s Heart Shaped World album—making the sound one step closer to that of the extremely well-mastered (and pressed) LP; my memory tells me the LP, played on a well-setup system, still has the subjective edge.

The D-N150 digital/CD player ($2595) from Luxman was on static display with its companion SQ-N150 tube-based integrated preamp/amp ($2795). The small-footprint units (8.25” x 11.25”) are ideal for spaces where larger components cannot fit. The SQ-N150 uses EL84 output tubes and ECC83 (12AX7) dual-triode tubes, and also has a moving-coil input. The D-N150 player supports CD playback through the built-in CD transport and has a Texas Instruments PCM5201A DAC chip that supports up to 192kHz data over USB, optical, and coax inputs. Microsoft Windows and MacOS software drivers are available for seamless interfacing with those operating systems. 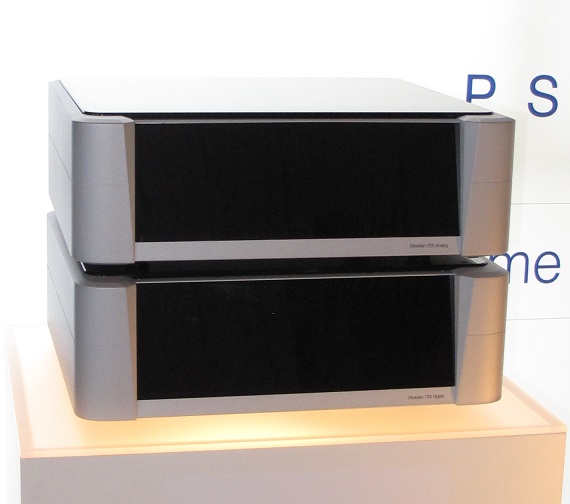 The digital sources included a set of excellent-to-good-sounding products that, in some cases, blurred the lines between digital sources and preamplification. These products, in no particular order, were the Elac Alchemy DDP-2-BK ($2499, DAC/streamer/preamp), Bel Canto e1X ($6500, DAC/preamp), LinnenberG Satie ($9995, DAC/preamp), ATC CDA2 ($4249, DAC/CD player/preamp), Technics SL-G700 ($2999, DAC/streamer/CD-SACD), and the soon to be released (third quarter of 2019) Classé Delta PRE (DAC/preamp).

Good Sound:
In a small room, unlisted in the AXPONA show guide, Magnepan had the LRS ($650) on display driven by a Magnepan prototype amplifier and Bryston electronics (including the $4495 BP-173 preamplifier, $3795 BCD-3 CD player, and $3995 BDP-3 DAC). The LRS speakers were set up a few feet off the wall behind them and three chairs were placed a few inches away from the wall behind those listener seats. Wendell Diller (from Magnepan) played several pieces of music from a few demo discs he had with him. The sound was excellent for this $650 speaker. Proper decoupling of the speaker from the music was there, producing a nice and believable soundstage with good imaging. The speakers seemed to handle all of the music Wendell played with ease. The LRSes need a powerful amplifier since they have a nominal 4-ohm load. Sensing very good playback from multiple songs, I noticed the Reference Recordings disc of Exotic Dances from the Opera. I asked Wendell to play the “Hopak” excerpt from that CD in order to evaluate the sound of a short but dynamically filled orchestral performance. Listening to this piece solidified earlier thoughts of excellent performance from the system pairing and also revealed the limits of the system in dynamics and freedom of playback (it made clear why there are larger, more capable and more expensive offerings from Magnepan). For instance, if one moved the listening chair a few feet away from the wall behind the listening position, the low-frequency room gain on that wall was lost—resulting in much less bass output. However, most listeners in smaller domestic environments may have the listening chair or couch up against the wall which creates the balance in the bass this type of room gain provides. Overall, an excellent speaker at its price range and beyond when driven by capable amplification.

For the past few years, I’ve been impressed with Joseph Audio’s show presentations. I’ve been able to play 15ips tapes (a safety mastertape and transfers from my vinyl) that I use to evaluate music playback on tape decks. The occasional vinyl LP is also played at times during show evaluations in this room. The system has had tube electronics from Doshi Audio and solid-state electronics from Jeff Rowland Design Group driving the speakers (the tape preamp has always been Doshi). The system was wired with Cardas cables throughout. This year, Joseph Audio introduced the new Perspective2 Graphene ($14,999) speaker. The new speaker is a legitimate upgrade over the Perspective it replaces—I had a very nice technical discussion with Jeff Joseph during a brief overlap of morning breakfast about the level of redesign work he put into this new speaker. This year, I listened exclusively to the digital playback and the system, again, sounded excellent. Each aspect of the sound was captivating and as open as can be in a show environment. Once again, Joseph Audio impressed this listener at another audio show—this time it was the new Perspective2 Graphene—the company must be doing something right.