At the end of a major audio show, there’s often a sense of depletion, a let’s-pack-this-stuff-up-and-go-home kind of exhaustion. Not so at 4 p.m. on Sunday at AXPONA 2019. There was, instead, a vibe of slightly giddy accomplishment as the big loudspeakers were returned to their wooden crates and the unsold LPs re-boxed. The consumers, too, seemed happily weary, having had a comprehensive exposure to an industry that is flourishing as it adapts to new technologies and to the requirements of younger sound-conscious music-lovers. The High End is alive and well: Gordon and Harry should be smiling from above.

One measure of AXPONA’s unequivocal status as the leading North American audio show was the sheer number of new product introductions, in all categories. This was certainly true for loudspeakers retailing for under $20,000, a component class of great interest to many real-world audiophiles. There were at least 25 new designs to be seen and heard. I know now that at least one new speaker got past my radar, the Joseph Audio Perspective 2 Graphene ($14,999—all prices in this report are per pair) and there could be others. To those manufacturers, and to you reading this report, I apologize. This was a big show. 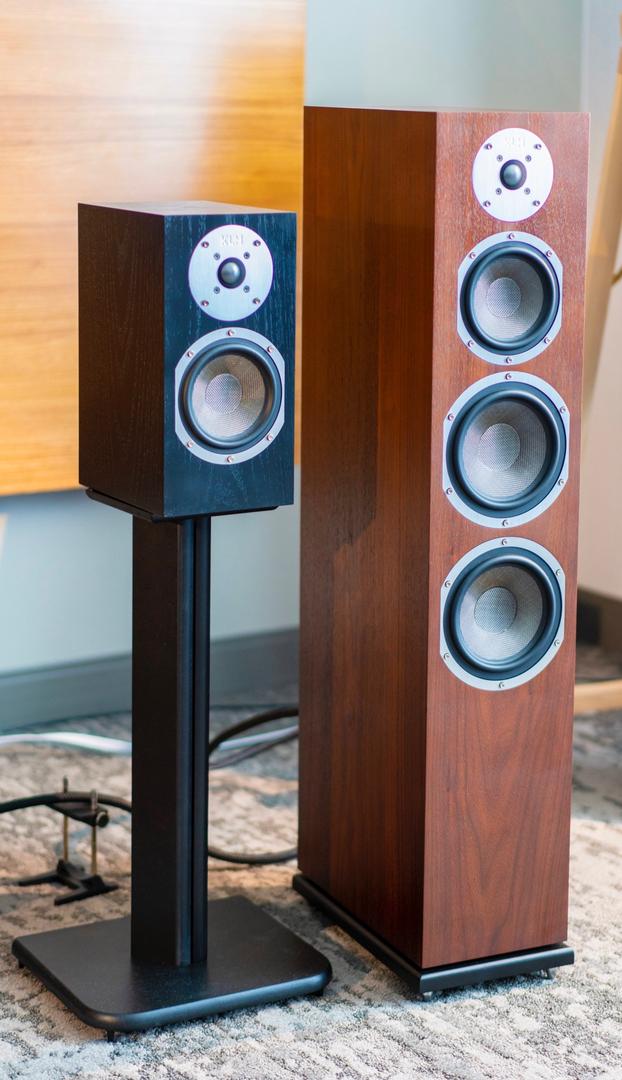 There were upgrades to several small, inexpensive, Chinese-built speakers, specifically the Audioengine A2+ ($279) and the Vanatoo Transparent One Encore ($599). Also presented with great fanfare was a prototype of the PS Audio AN3, a large, full-range loudspeaker that sports an AMT high-frequency driver, a planar-magnetic midrange, an 8″ mid/bass coupler, and a 12″ side-mounted, servo-controlled woofer with 700 watts of amplification onboard (expected price in the $11.5k to $14.5k range). In the let’s-visit-the-past-but-make-it-better market segment, AXPONA attendees witnessed the next phase of the “rebirth” of the KLH brand with two models, the three-way Kendall ($1298) and the two-way Albany ($479); they could also hear the Wharfedale Linton Heritage ($1499, stands included), a very traditional-looking and -sounding British monitor first sold in the mid-1960s but now updated with modern parts and materials. The German company Voxativ heralded “pure plug + play listening” with three loudspeaker model options that become an “Absolut System” when paired with the appropriate “Absolute Box,” an integrated Class A/B amplifier plus DAC, with WiFi and Bluetooth capabilities. I heard the stand-mounted Hagen model ($7900) that incorporates Voxativ’s AF-1n full-range driver, as do all the brand’s speakers. 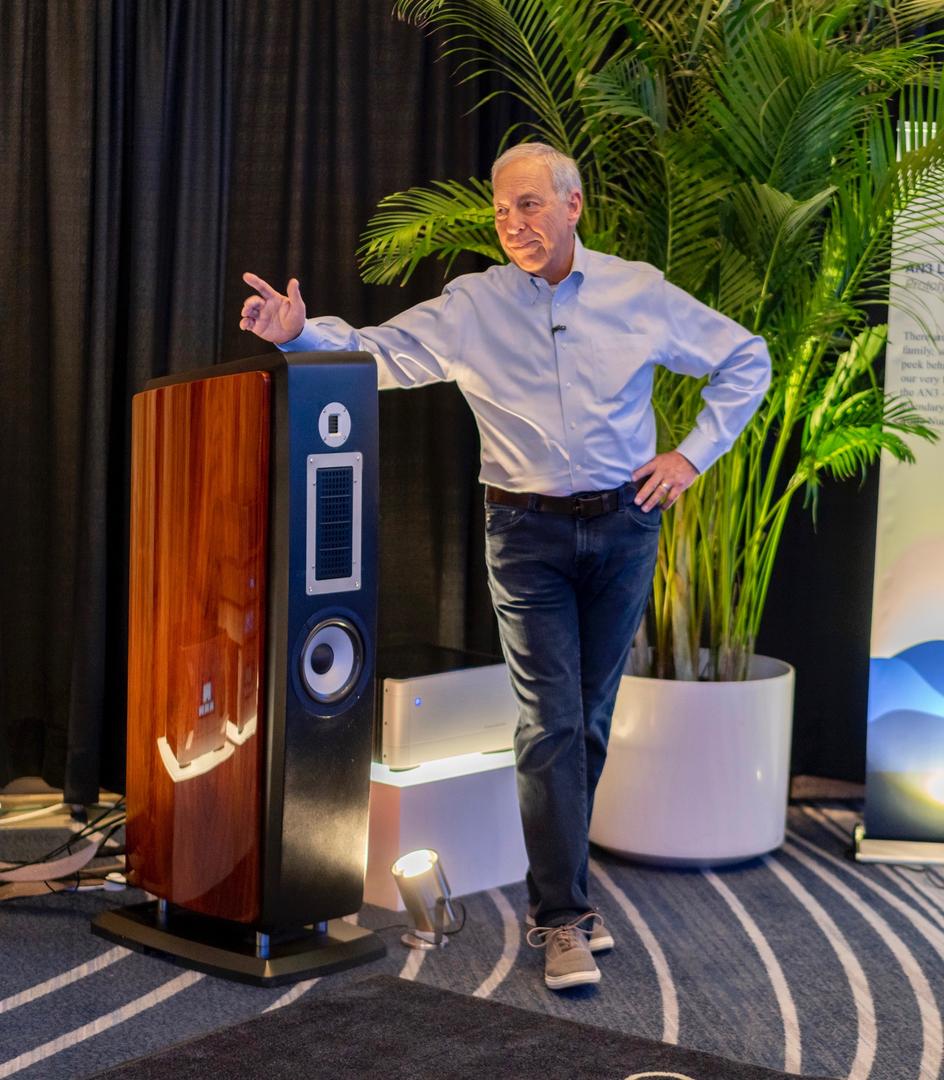 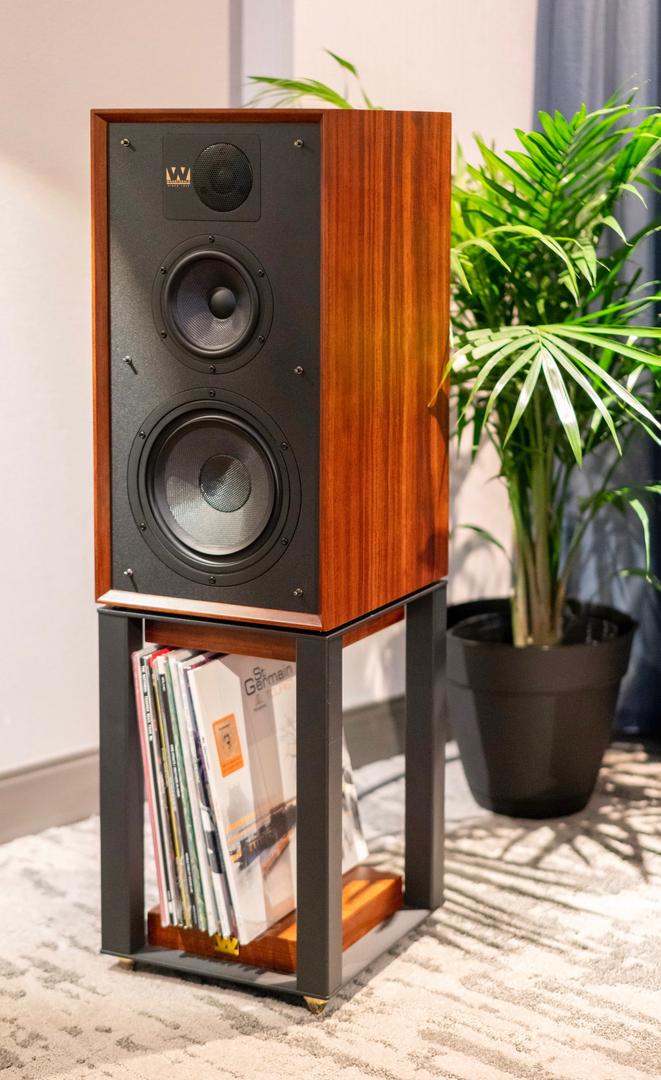 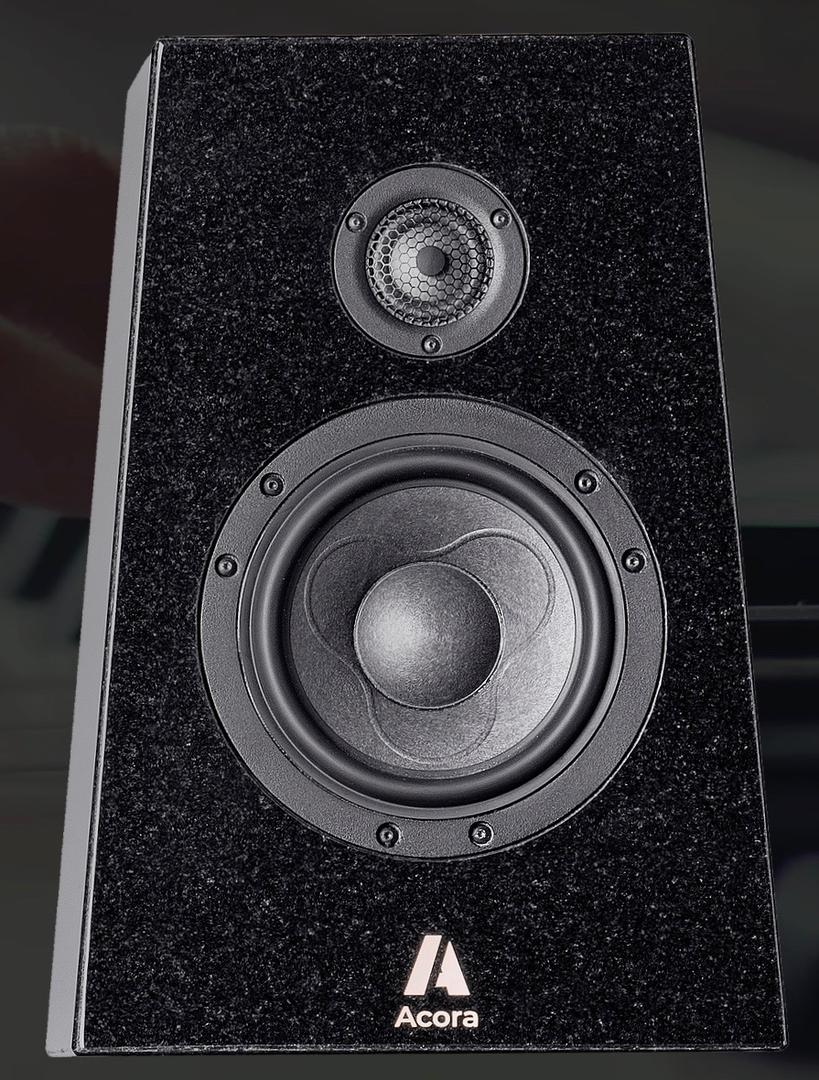 Valerio Cora’s father started the family stone business in the 1950s that continues to thrive to this day. The son joined this expertise to a refined audio sensibility to found Acora Acoustics, based in Toronto, in September of 2018. The company’s loudspeaker enclosures are fabricated from black African granite, the densest granite there is, and in the case of the 58-pound stand-mounted SRB ($14,999), fitted with two ScanSpeak drivers—a beryllium dome tweeter and a two-layer pressed woofer. Clearly, the cabinet manifests no unwanted resonances. The SRB’s tonal presentation is completely uncolored and imaging is…well, rock-solid. The purity of the glockenspiel notes that open the Shostakovich symphony was exceptional and the nuances of Nathan East’s fluent electric bass lines were easier to follow than ever on “Act Your Age”.

Also from Ontario but on the high-end scene far longer is Gershman Acoustics, who played its own new Grand Studio ($6500), a two-way mounted to an integral stand made of ½” solid steel. A 1″ Vifa silk-dome tweeter is crossed over at 1500Hz to a thick anodized aluminum woofer via a modified second-order crossover of Mr. Gershman’s design. These visually unobtrusive speakers play big, with excellent dynamics and superb detail. The scaling of piano and violin on the Brahms recording was nonpareil.

Marco Serri Design loudspeakers are built in Guiglia, Italy, a municipality close to Modena, famous as the home of several sports car manufacturers. The sample of the Gran Torino ($14,900) at AXPONA was finished to automotive standards in a stunning “Deep Cosmic Blue”. The driver complement includes a handmade silk-dome tweeter with a pricy Neodymium N52 magnet, two 6.7″ midrange cones operating at different frequency ranges, and a side-firing 10.5″ paper cone woofer that gets down to below 30Hz. Marco Serri, the man, is known for his skill designing crossovers, and the transition from the mid to high frequencies was exquisite, as good as I’ve heard. Female vocals and violin were utterly nonfatiguing.

Wendell Diller demonstrated the new Magnepan LRS (LRS for “Little Ribbon Speaker”) that sells for $650/pair. The LRSes were driven by a prototype Magnepan amplifier; Diller explained that the price for the loudspeaker has been kept down by counting on owners to drive them with a high-current amplifier. The speakers manifested the usual Maggie virtues of excellent detail, good soundstage depth, and tonal seamlessness—Victor Feldman’s piano registered as a single instrument from top to bottom—but also had a surprising ability to contain orchestral climaxes that belied their small size. To help get the word out, Magnepan offers a free 60-day money-back trial with the LRSes.

Sandy Gross was holding forth in his usual first floor room with the GoldenEar Technology Triton One.R ($6000), a slimmed-down version of the Triton Reference, itself one of the great bargains in high-end audio. Introduced in December of 2018, the 92dB efficient One.R is a complex system with a High Velocity Folded Ribbon (HVFR) tweeter, two 5¼” cast-basket mid/bass drivers, and three 5″ x 9″ long-throw subwoofers coupled to four 7″ x 10″ quadratic planar infrasonic radiators that extend “usable bass performance” down to 13Hz. Driven by the latest iteration of PrimaLuna tube electronics—another notable value—the speakers were totally unfazed by either the Shostakovich’s orchestral climaxes or the Big Phat Band’s most exuberant moments. 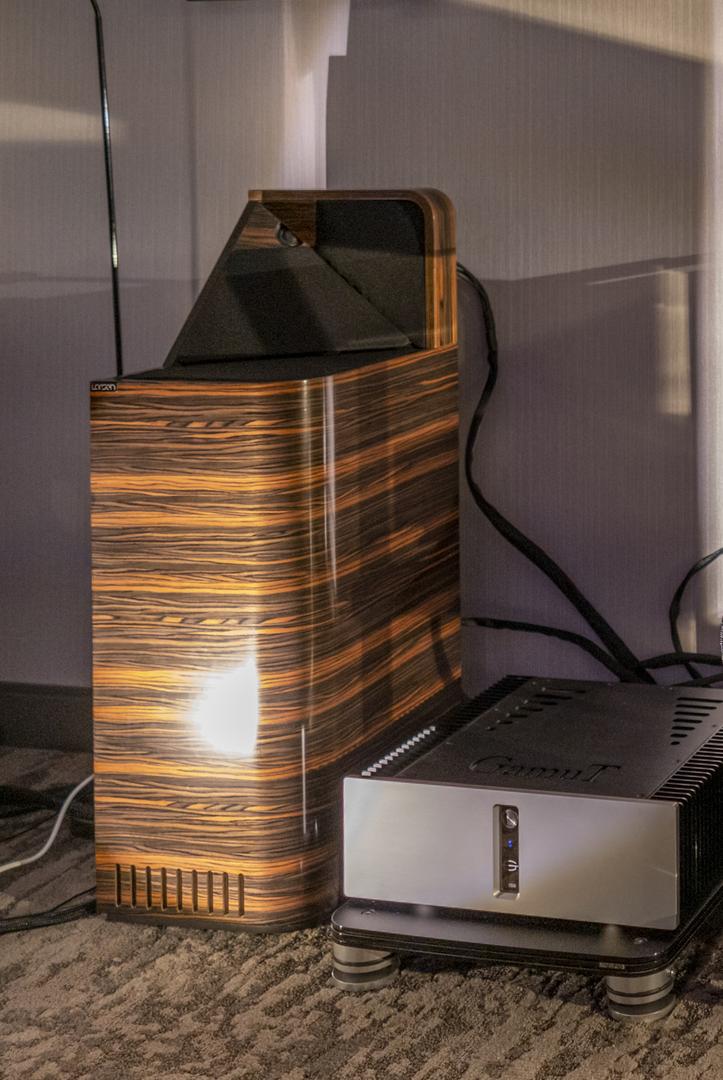 The Larsen 9 ($14999) speakers were positioned right up against the long wall of the room, as they should be, and delivered the same kind of openness and holographic staging as do considerably larger speakers in much bigger rooms. The decay of musical sounds was quite realistic. “Mercury” from Zubin Mehta’s Planets had a real sense of occasion, with a see-through transparency and tactile timpani hits. Watch for a review from Robert E. Greene.

The affable Gunny Surya, Sonner Audio’s President (and one of its designers) was on hand to show off the new Legato Unum ($4750), a 20-pound two-way with a 1″ ring radiator and 5½” coated-paper cone deployed in a bass-ported plywood enclosure. Matching stands are $750. There was excellent scaling of the seven solo instruments involved in L’histoire du soldat and these modest-sized speakers handled Power Music quite respectably, with bass response specified down to 43Hz.

Salk Sound has been quietly building a loyal constituency for as long as I’ve been attending audio shows and this year’s introduction was the SS 9.5 ($9995; the gorgeous fireburst finish at AXPONA costs a few thousand more). With a Sartori beryllium-dome tweeter, Audio Technology midrange, and a Sartori 9.5″ woofer (plus side-mounted passive radiators) the 9.5s manifested impressive frequency extension and lifelike dynamics. With demonstrator-chosen tracks—Diana Krall, Beethoven’s Symphony No. 7 (Solti), and Joe Bonamassa (“High Water Everywhere”)—it was obvious that these were profoundly musical speakers likely to please over the long haul. 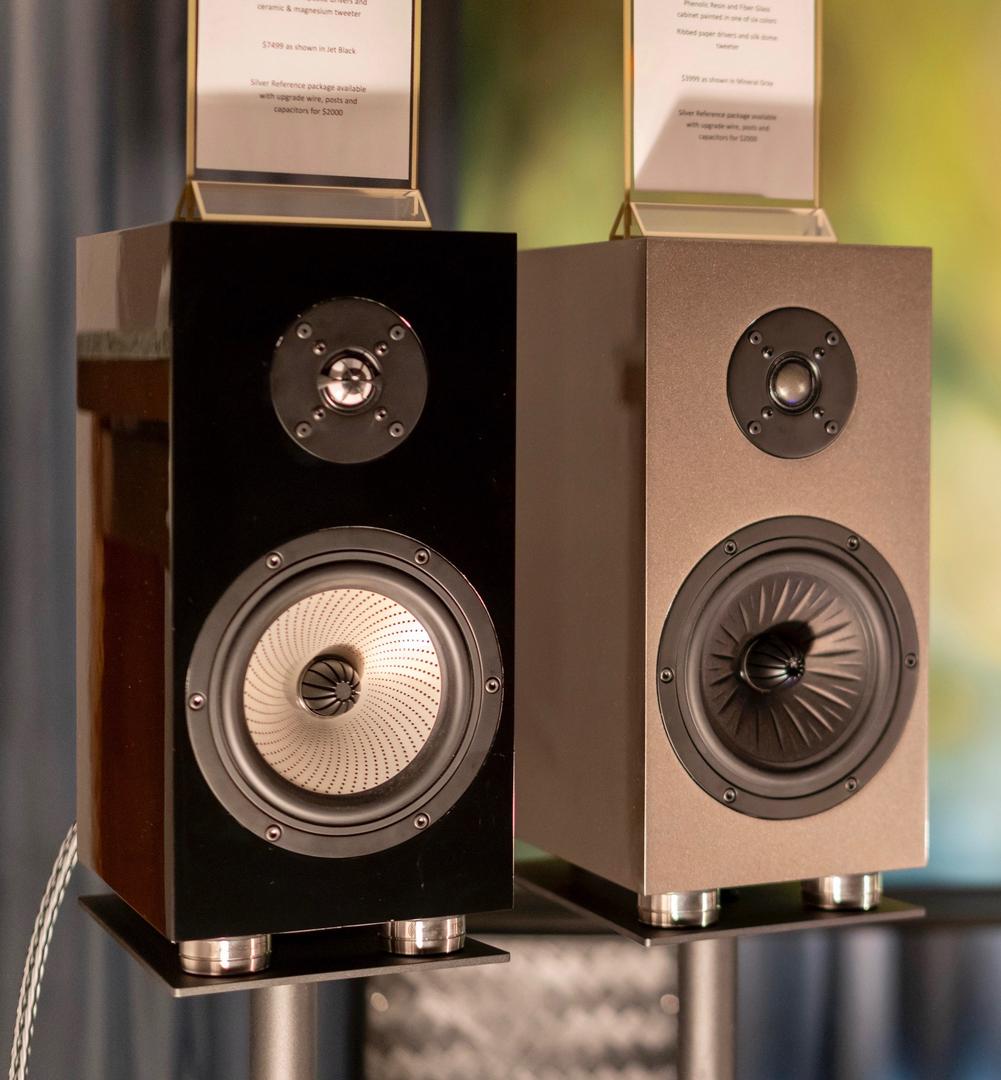 Verdant Audio, another new company, played two stand-mounted two-ways, the Blackthorn 1 ($7499) and the Nightshade 1 ($3999). The Blackthorn’s enclosure is made from carbon fiber over a DuPont Nomex core while the Nightshade’s cabinet is a phenol resin/fiberglass material. Both use Eton drivers. The Blackthorn 1s were especially impressive on first hearing; instrumental timbres were true on the Shostakovich recording.

The Czech manufacturer Acoustique Quality produces nine loudspeaker lines, the Passion models being the premiere series. To observe their 25th year in business, 50 pairs of the AQ Passion 25 ($5000) have been made. This floorstander, with a Sartori tweeter and midrange, plus a pair of ScanSpeak woofers, has a specified frequency range of 25Hz to 30kHz +/-4dB. The Passion 25s revealed that, on the Brahms recording, David Abel’s violin was indeed a Guarneri and not a Strad, and the Hamburg Steinway played by Julie Steinberg had satisfying weight. When the 50 pairs of the anniversary edition are gone, the speaker will go into regular production and cost $6k. 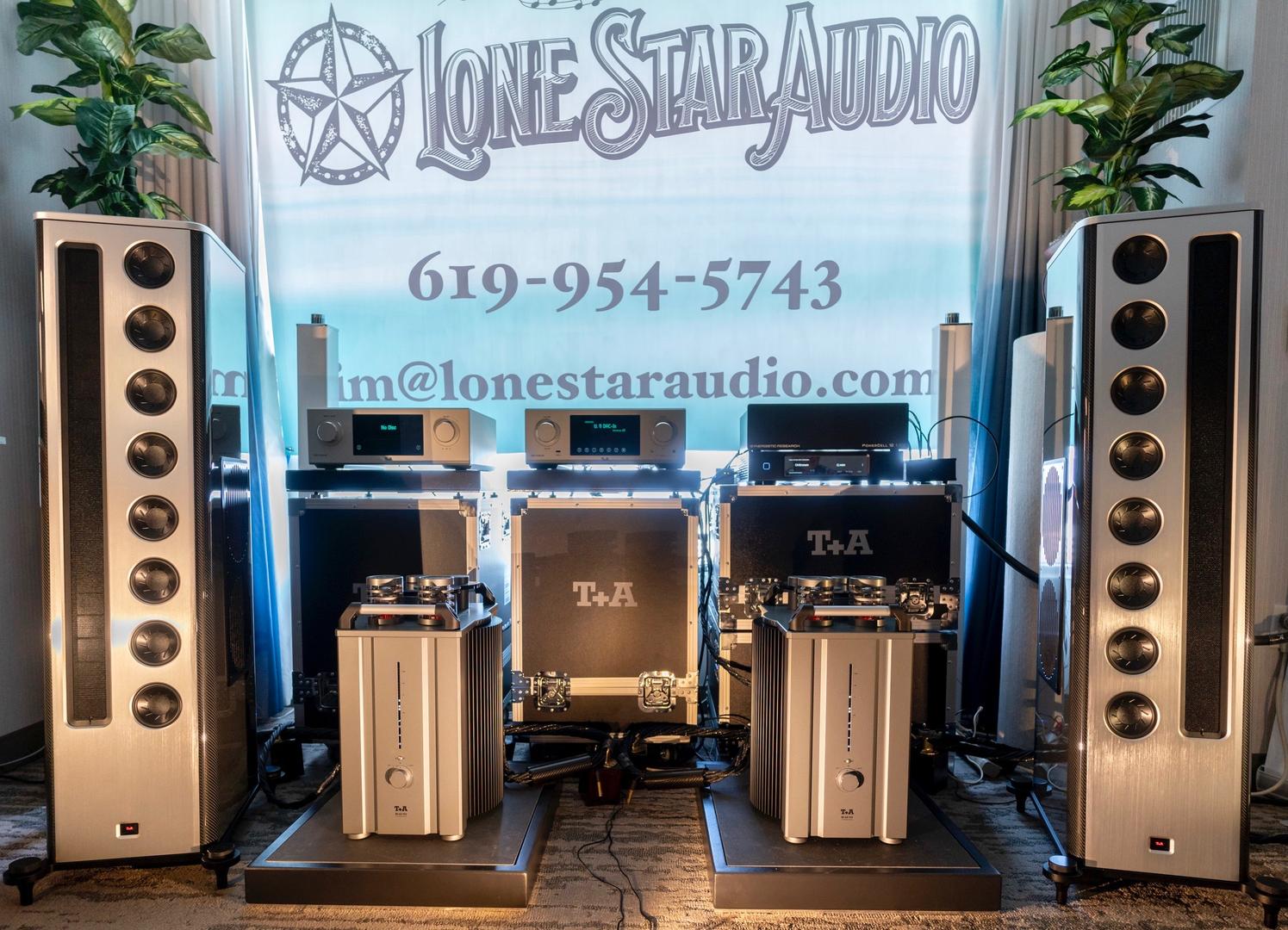 Good-Sounding Rooms
Good-sounding rooms were found at all price-points although it sometimes seemed that, as Oscar Wilde remarked, “Nothing succeeds like excess.”  In the room hosted by Lone Star Audio, an appointment-only dealer in Lakeway, Texas, T+A’s new Solitaire CWT 1000-40 loudspeakers ($73k) were powered by that company’s M 40 HV monoblock amplifiers ($59k/pr.) and preceded in the chain by T+A’s new digital components—the SDV 3100 HV streaming DAC preamp ($37.5k) and a PDT HV transport ($22.5k). An Aurender N10 server ($8k) played the DSF files I’d brought along. Cables were from Synergistic Research. The degree of precision to the scaling of instruments and the specificity of the imaging were like nothing I’d ever heard. For some, this will be too revealing but, for me, the system exposed the structure of the music the way that following a score can do. 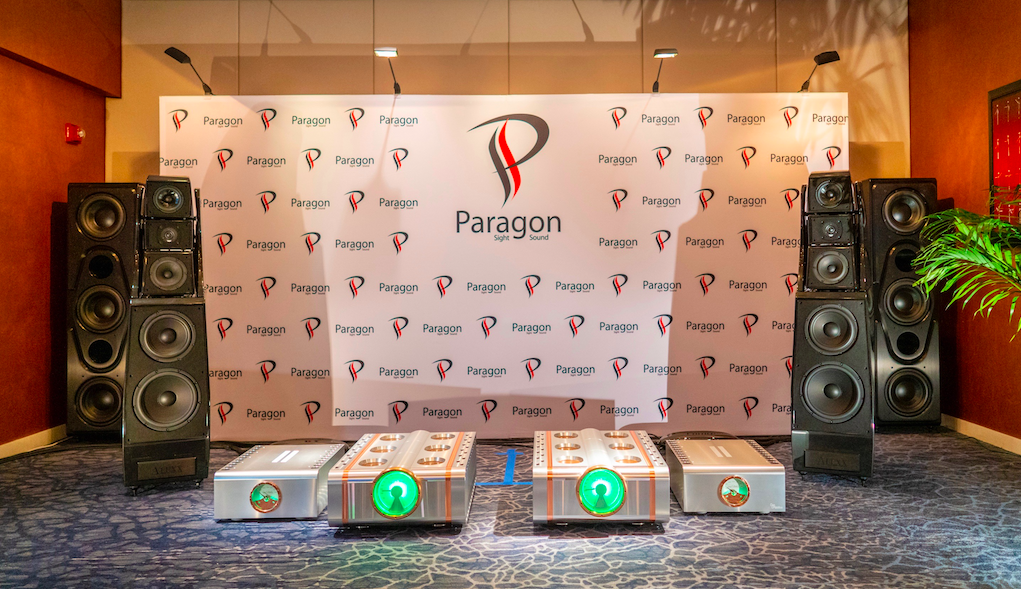 On the other hand, one of the rooms sponsored by Paragon Sight & Sound of Ann Arbor, MI, presented a system with a more expansive, “Romantic” character that appealed as much to the heart as to the brain. The loudspeakers were Wilson Audio Alexx ($109k) plus a pair of Wilson Subsonic subwoofers ($75k) with amplification provided by two D’Agostino Relentless mono amps ($250k) and two D’Agostino Progression monoblocks ($38k). Peter McGrath played digital files with a dCS Vivaldi One ($92k) and dCS Master Clock ($15k). All the cabling was Transparent and the use of a Stromtank 2500 Independent Power Source no doubt kept the lights from dimming elsewhere at the Renaissance Schaumburg Hotel & Convention Center. 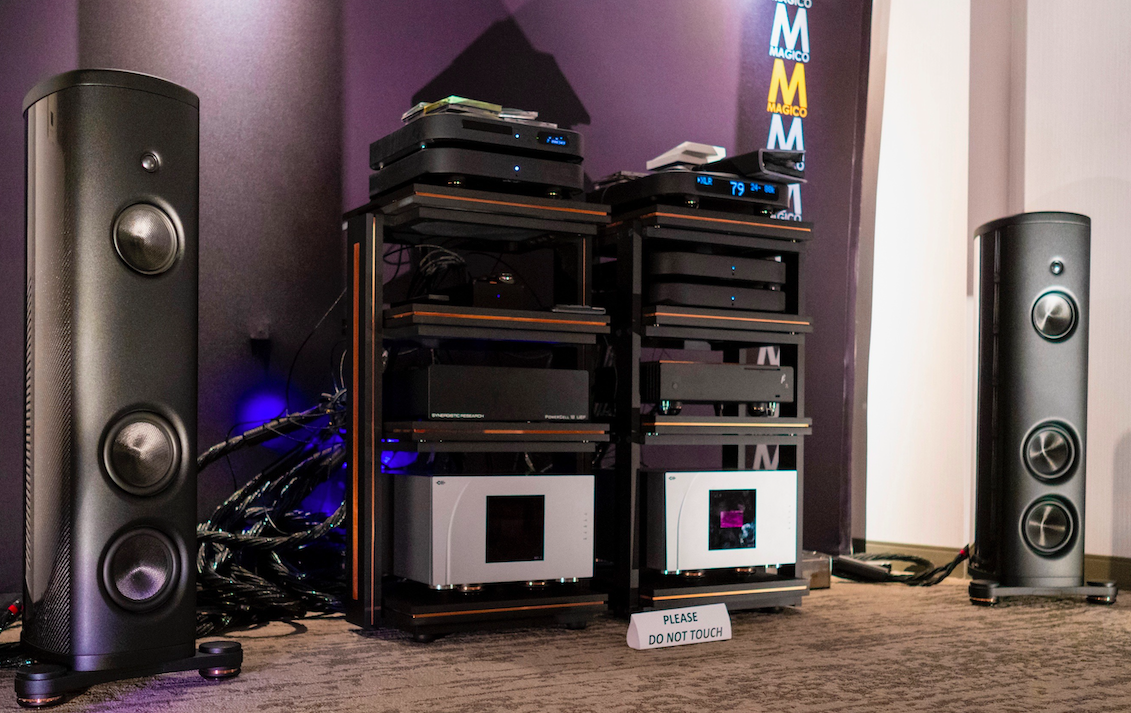 Striking a happy medium, in terms of my own preferences, was the rig configured around a pair of Magico M2s ($63k), each driven by a CH Precision M1 amplifier ($94,750/pr.). The digital source was an MSB Select II DAC ($84.5k) and transport ($24.5k). In a standard-sized hotel room, without a sub, the orchestral foundation with the Shostakovich was robust and Dire Straits was rendered with satisfying bass slam.

To come down a bit in price, you had to endure the elevated ambient temperature of The Big Raidho Room—actually a rather diminutive box constructed by the importer/distributor Audio Skies in the Expo area of the Convention Center. It was well worth the schvitz. Featured were the new Raidho TD 1.2s ($27k, stands $2900), driven by Jadis NEC 845 power amps ($29,990) with a Jadis JPS2 preamp ($15.5k) and JPS3 phonostage ($14,990). The source was vinyl, played on a Pear Audio Blue turntable/’arm combo ($7995) equipped with an Ortofon Cadenza Black cartridge ($2700). Gamut speakers cables, interconnects, and power cords completed the package. The system accurately represented the material it was fed. The dry-as-a-bone Johanos/Dallas Symphonic Dances was parched as ever; Nora Jones’ voice was present and beautifully characterized on “Don’t Know Why”.

Most Significant Product Introduction
Acora Acoustics loudspeakers. Right out of the gate, these guys have the whole enclosure thing down, which is huge.

Most Important Trend
More and more DAC/streamers. Pretty soon, there will be no point in bringing discs to a show…unless they are black ones, 12″ in diameter.

Best Sound (cost no object)
Magico M2. There were several top-drawer loudspeakers that I didn’t get to hear this time but, honestly, I could have gladly listened to the M2s all afternoon. 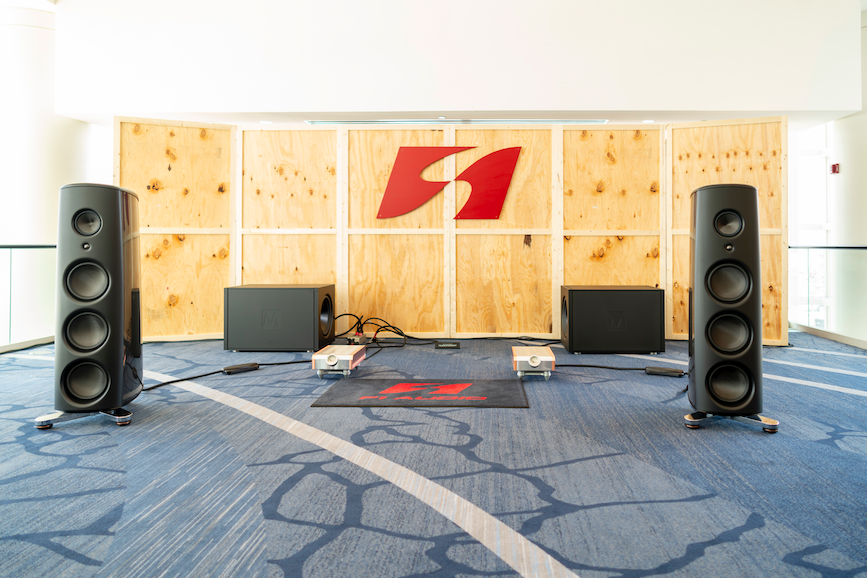 Best Demo
Magico M6 with a pair of QSub18s. Set up in a vast atrium-like space and powered by D’Agostino amplifiers, the effect was completely over-the-top. But you wouldn’t want to have missed it. 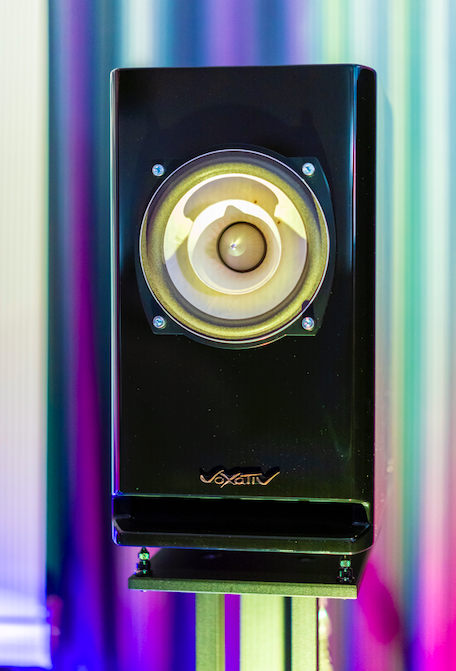 Worst Name for a Loudspeaker
Voxativ Hagen. The designer of these German speakers was quite aware that Hagen was the most villainous of the various bad guys in Wagner’s Ring cycle. He was responsible for the end of the world, for crying out loud. Hagen, not the Voxativ designer.