In just a few short years, AXPONA has become one of the most enjoyable and best-run shows in the nation. Under the skilled guidance of JD Events, we saw yet another significant increase in attendance, 16% over 2015 (with 4092 unique visitors), and in exhibits, 111 active exhibit rooms on eight floors, (an increase over last year’s 104 rooms), with some 35 new-product introductions! I can’t wait for next year! This is going to be a hard act to follow. 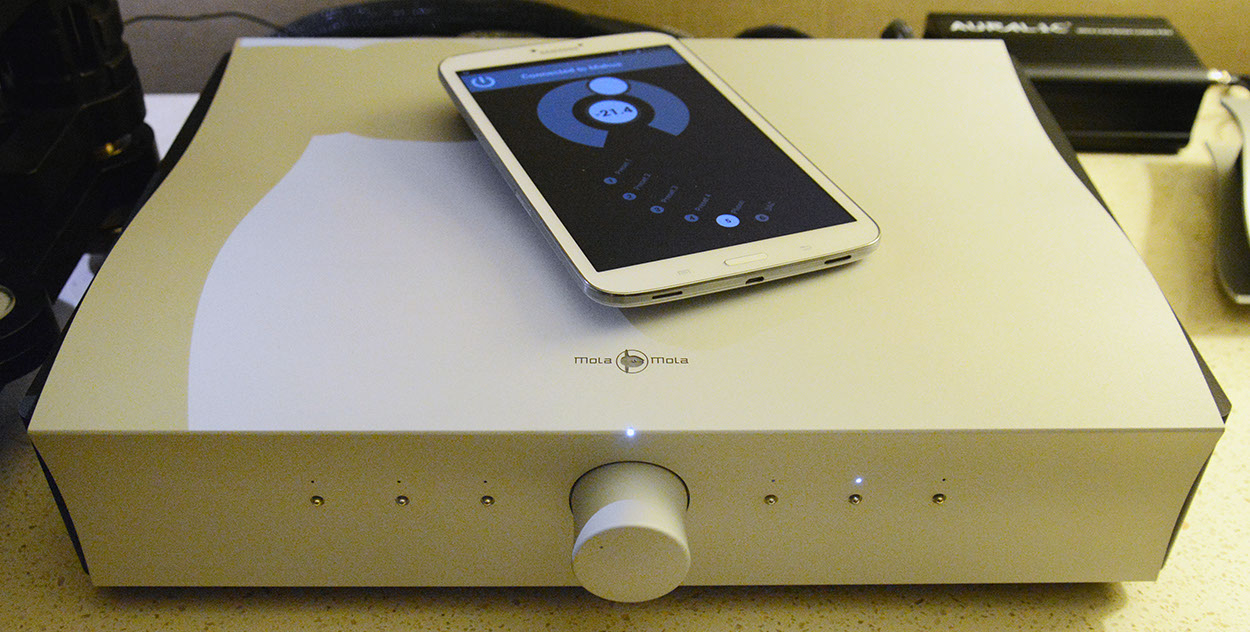 Bruno Putzeys’ Mola-Mola line introduced the Makua linestage ($11,740). The Makua was shown with its optional phonostage ($2900 additional) in a room sponsored by GTT Audio. The Makua is wildly versatile, allowing for the previously mentioned phonostage and/or an optional DAC ($7850). With five sets of fully programmable inputs (RCA or XLR), it can route any input through the optional phonostage (or DAC). Each input can be independently set for gain and equalization, named, then stored, and all are controllable from a tablet or mobile phone! The Makua was shown in a system fronted by the Kronos Sparta turntable ($21,500), with Helena tonearm ($7125), and the Air Tight PC-1 Supreme mc cartridge ($11,000), and rounded out by the Mola-Mola Kaluga mono amps ($16,500/pr.) driving the YG Acoustics Carmel 2 loudspeakers ($24,300). All cabling and power conditioning was Kubala-Sosna Emotion Series. This system sounded phenomenal—fast impactful bass, clean transients, articulate mids, and luxuriant body and bloom.

Ron Sutherland was on hand to introduce his new Argentum Plus phonostage ($16,000), in a room sponsored by Audio Pathways. I was initially speechless when I learned that the Plus offers balanced operation, as for years Ron has eschewed XLR connections, championing the advantages of single-ended. Using creative board-construction techniques, leveraging native device capabilities, and employing physical sockets for Old School drop-in (capacitive or resistive) loading, rather than a selectable series of DIP switches, he allows users to select either RCA or XLR connections. A Bergmann Magne turntable ($16,880 as shown) fed the Argentum Plus, which in turn drove the Avantgarde Zero XD loudspeakers ($21,950). All cabling and conditioning was Transparent Gen 5, and stands and bases were from HRS. The sound was exhilarating and refined, with stunning transients and über-realistic tone and texture, leaving no doubt why so many of us still cling to the LP format.

Some thirteen years after the SWL’s initial release, ModWright’s SWL 9.0 Anniversary ($2900) was intro’d at AXPONA. Revisited, not merely reissued, the redesign of ModWright’s first original product is much more allied with the current company’s aesthetic. Now selling for just $1000 more than the 2003 SE version, with four sets of RCA inputs (one of which doubles as home-theater bypass), two sets of RCA outputs, a set of RCA tape outputs, a hybrid headphone amp with front-panel jack, and an optional mm/high-output-mc solid-state phonostage ($300), it is as versatile as it is affordable. The sound was directed from an Aurender N10 ($7999) music server feeding a PS Audio DirectStream DAC ($5999) through the Anniversary to a ModWright KWA 150 Signature Edition amplifier ($8995), driving the Ryan R630 loudspeakers ($5000/pr.). The overall presentation here was very natural and relaxed, yet rich in relevant musical detail, with no hardness or edginess. 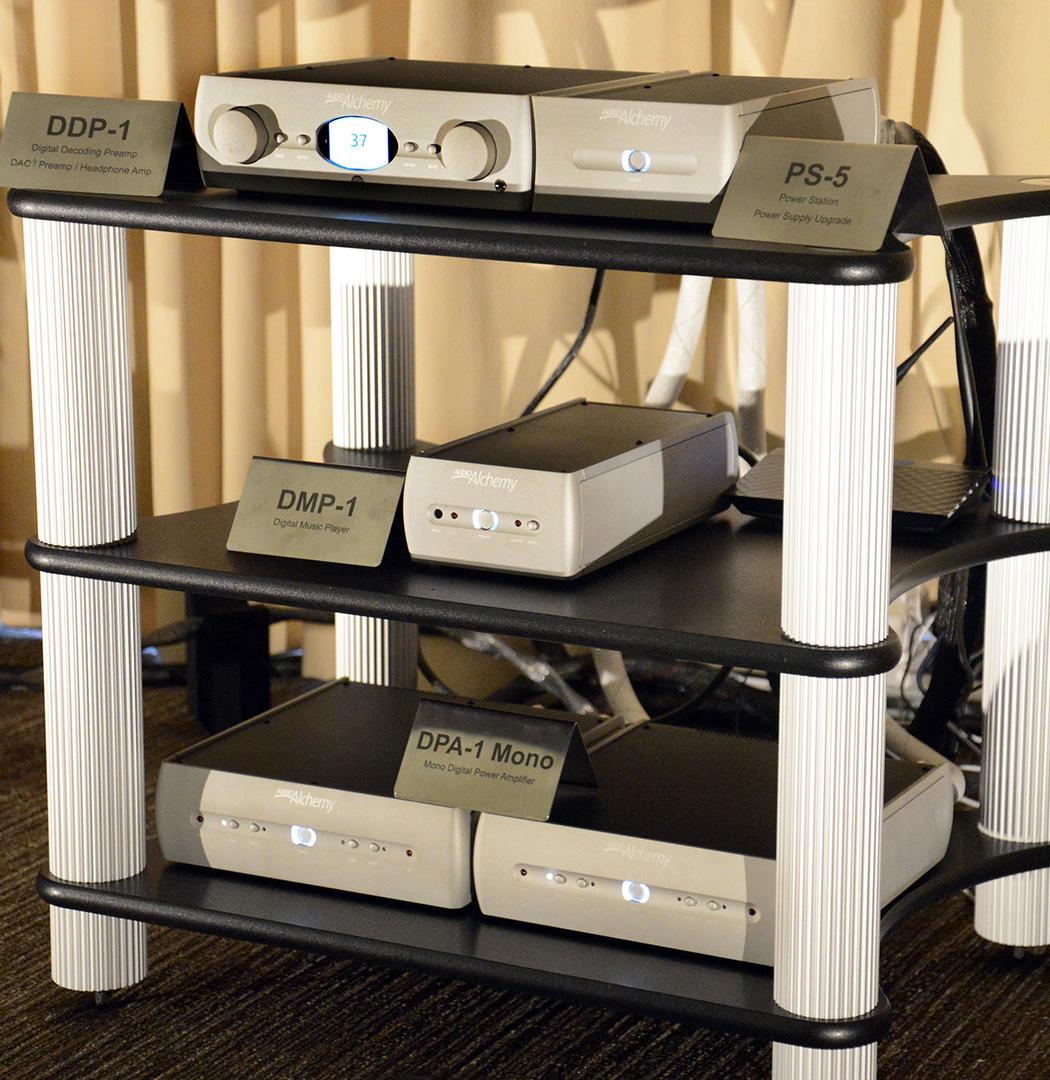 The ridiculously overachieving gear from the reborn Audio Alchemy stole the hearts of all who had the opportunity to listen. AA introduced the DMP-1 digital media player ($1795 with ROON option), streaming to its DDP-1 DAC/preamp ($1995) with the PS-5 power supply ($595), which fed a pair of DPA-1-Mono power amplifiers ($1995/ea.). This superb system drove an equally astonishing new speaker, the Endeavor Audio Engineering E-3Mk II ($8000/pr.). I dare you to find better performance in this price range! The DMP-1 is unique in my experience. By accessing its internal webpage—once it is connected to your network, much like a printer or router—you can directly create and run playlists. And once you’ve created a playlist, you can play from or skip through it using the DMP-1’s infrared remote.

Emerald Physics introduced the 200.2 SE ($2995), a versatile 200W (into 8 ohms) or 400W (into 4 ohms) amplifier. It can be used as an integrated amplifier, using its own two sets of RCA and single set of XLR inputs. Via the loop-thru (around the volume control), it can also be run like a preamp out/main amp in, allowing the implementation of digital processors, like those used for DSP speaker/room correction or active crossovers. This loop-thru also facilitates multi-amp systems for bi- or tri-amping.

ExaSound presented a five-channel system, using its multichannel Femto-clocked e28 Mk II DAC feeding a Parasound Halo P7 7.1-channel preamplifier ($2000), a Parasound Halo A51 five-channel amplifier ($4500), and five Magnepan 1.7i loudspeakers. Even at a much lower price than last year’s Pass Labs/Maggie 3.7s multichannel exhibit, the exaSound system retained the lion’s share of relaxed naturalness and convincing vibrancy, with an overall neutral balance, and, of course, space you could get up and walk through. 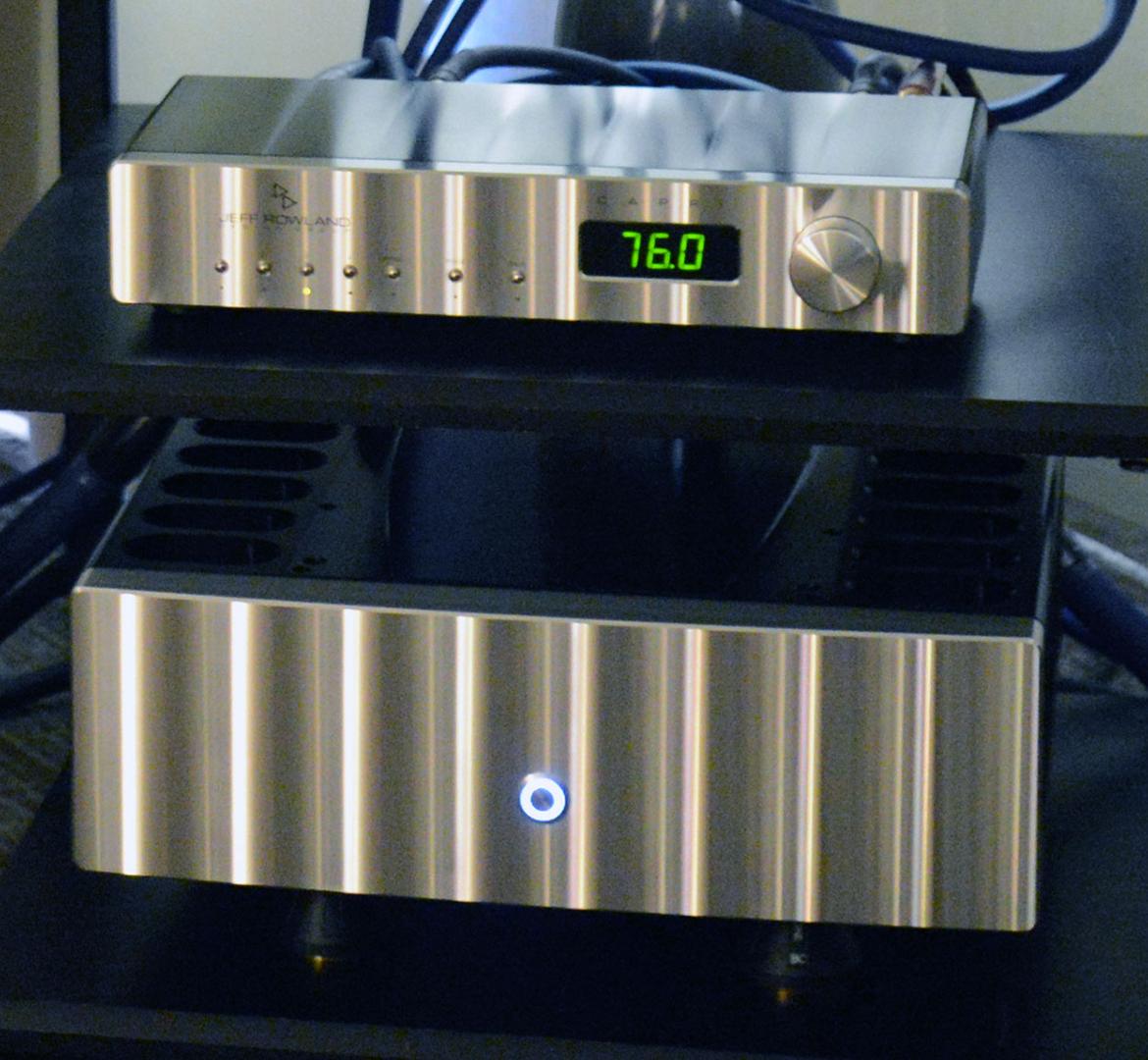 The Jeff Rowland Design Group 625 Series 2 amplifier ($15,900) debuted in a room cosponsored by Joseph Audio. Incorporating technical features from the 725 amplifiers, its signal circuitry features a Rogers ceramic circuit board and the same four-pole filter capacitors used in the 725’s power supply, significantly reducing power-supply output noise. With a maximum output power of 325 watts per channel into 8 ohms, the Series 2 represents a significant improvement over the original and the Series 1 versions. Sources included the VPI Prime ($4000), with a Dynavector DV 20X ($1000), an Ampex ATR-102 ($Priceless) using 15ips two-track tapes from Acoustic Sounds. Digital was fed from a MacPro to a Rowland Capri preamp ($3950) with DAC card ($450 additional), analog to a separate Capri with a phono card ($1100 additional). This room also featured the Joseph Audio Profile ($7000/pr.) loudspeakers and Cardas cabling. This system was engaging, with excellent detail, speed, and space.

Playback Designs introduced a number of versatile and remarkable-sounding items, including the IPS-3 integrated ($13,000) and Pinot ADC ($7000). Delivering 130W per channel into 8 ohms, the IPS-3 includes USB, AES/EBU, RCA, and PLINK digital inputs, as well as two single-ended and one balanced analog inputs. It will play PCM up to 384kHz and Quad DSD, with support for DoP on all digital inputs, and includes a dual-differential native DSD converter. The exciting Pinot ADC is a tremendously flexible analog-to-digital converter, also supporting PCM output up to 384kHz and up to Quad DSD. It includes software to facilitate file creation and the software is upgradeable by the end user. 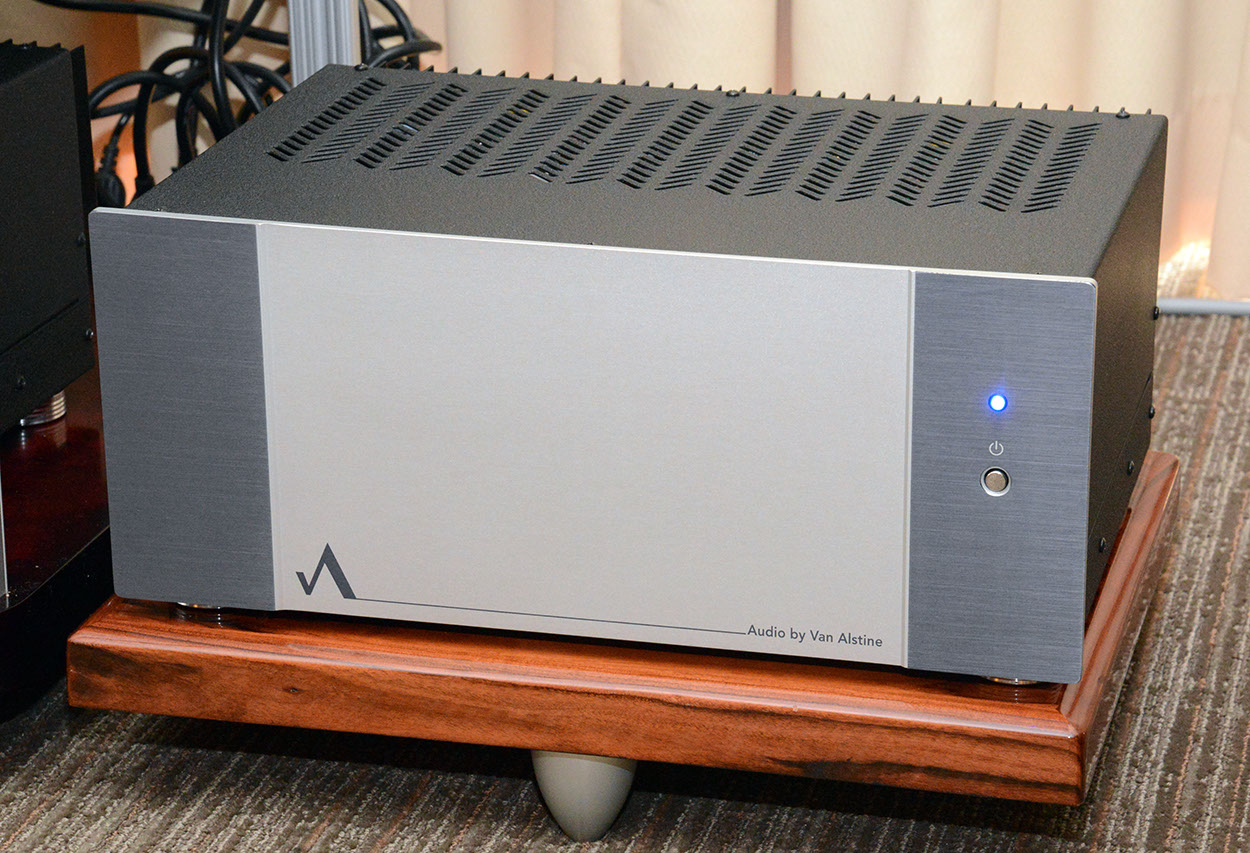 Audio by Van Alstine, showing with Salk Signature Sound, premiered two remarkably affordable, engaging products, the Transcendence 10 RB preamplifier ($899), based on the 6DG8 dual triode, and the DVA 850 monoblock amplifier ($3699/ea.), a beefy hybrid (12AT7 inputs/MOSFET outputs). I was struck by the preamp’s and the amp’s tonal purity and exceptional micro-dynamic scaling, all considerably more refined than one would anticipate given the price points, particularly of the 10 RB preamplifier.

Finally, Emotiva was on hand to launch a host of new products, from top-of-class AV preamplifiers to sophisticated power amps—so many, in fact, the exact number eludes me (it was in the mid-to-high twenties)! The demos I heard left me feeling as though this new lineup truly represents superb value in every category. Best of all, this stuff is completely American-made in Franklin, Tennessee!

Best Sound (for the money)
Hands down, the best sound I’ve ever heard for the money was the stellar Audio Alchemy electronics driving the seductive Endeavor Audio Engineering E-3Mk II.

Most Significant Introduction
The Wilson Audio Alexx, with the Mola-Mola Makua linestage a close second.

Most Significant Trend
The seemingly unstoppable resurgence of analog sources, both magnetic tape and LP.