Once again, the TAS show coverage team packed our bags and headed to the Chicago area (Rosemont, IL, to be specific) to cover Audio Expo North America (AXPONA) 2016. This year’s AXPONA welcomed a record number 5934 attendees flowing through 111 listening rooms, in addition to The Marketplace (where additional exhibitors and music were available) and Ear Gear Expo (for headphone and portable devices). With my assignment of finding new, newly introduced, first-time showings, or updated analog sources, the days were long and the rewards bettered last year’s offerings in quantity. As such, the show was improved overall. The average sound quality was also slightly superior over last year, which means AXPONA is moving in the right direction. Without spilling any more of my ink on introductions, let’s get started. 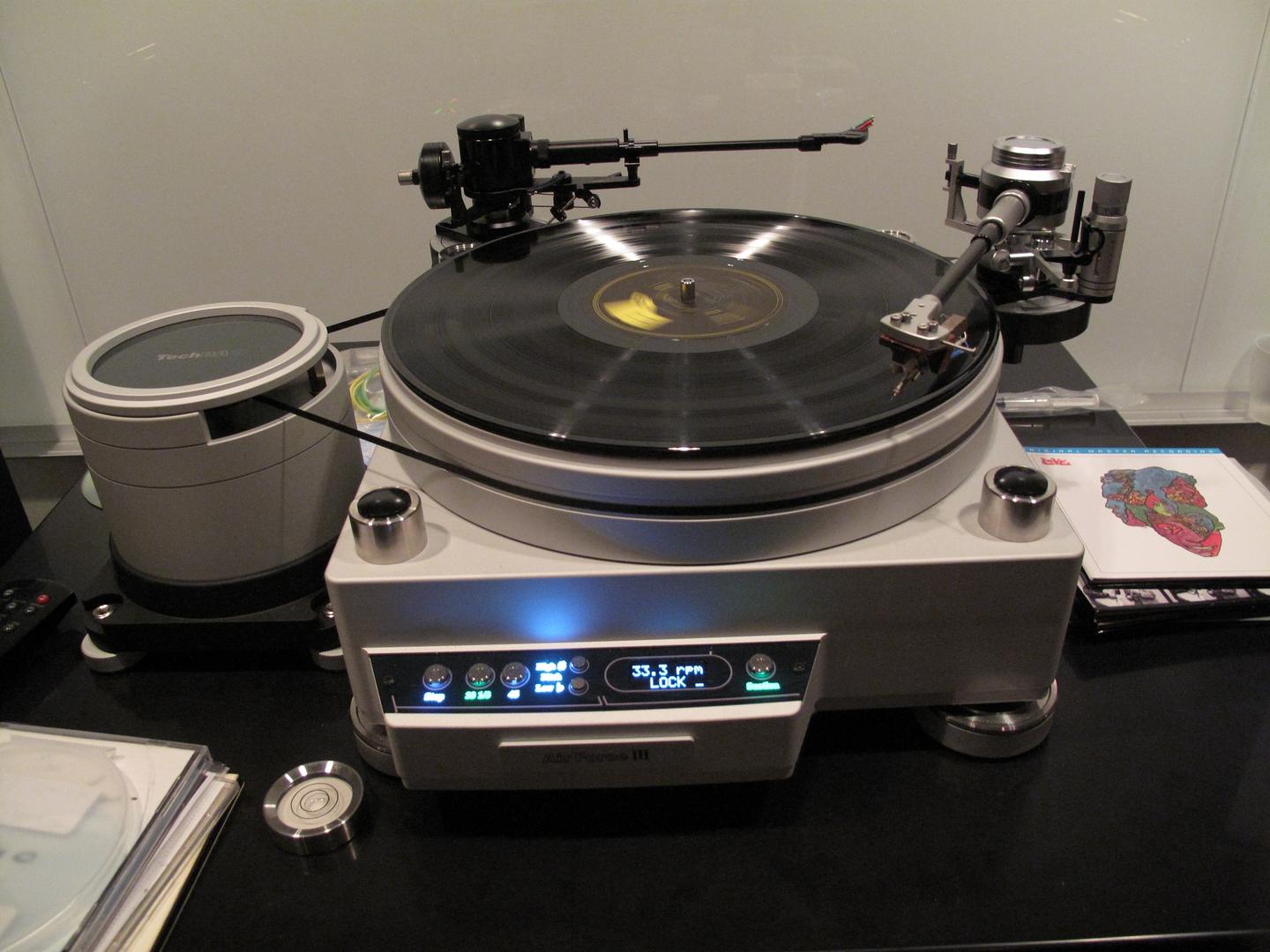 The TechDAS Air Force III ($27,000) is derived from the current flagship Air Force One ($105,000) turntable. The solid aluminum body uses the same material as the One but the size is reduced to a squarish shape about the size of the platter. At the corners of the Air Force III are four posts that allow the ’table to accommodate up to four 9”–12” tonearms, which is two more than the Air Force One or Air Force Two ($55,000) can handle. The multiple tonearm capability advantage goes to the Air Force III. The same vacuum hold-down feature is incorporated into the III as well as the same air-bearing platter. The III has an outboard motor pod with the same adjustments of the more costly ’tables. The one feature that is not available on the III that is on both the One and Two is the suspension isolation system. However, an air isolation platform will be made available as a future option. With its 40-pound chassis and 20-pound aluminum platter (optional platters to be available in the future) the III is not a lightweight. With a Graham Phantom Elite ($14,000) tonearm and the new Van den Hul Colibri Stradivarius ($7995) cartridge, it produced unbelievably good sound from Marten Coltrane IIIs ($100k) in the Kyomi Audio room when playing “A Night in Tunisia” from my Great Jazz Trio Direct from L.A. (East Wind, Direct to Disc) LP. 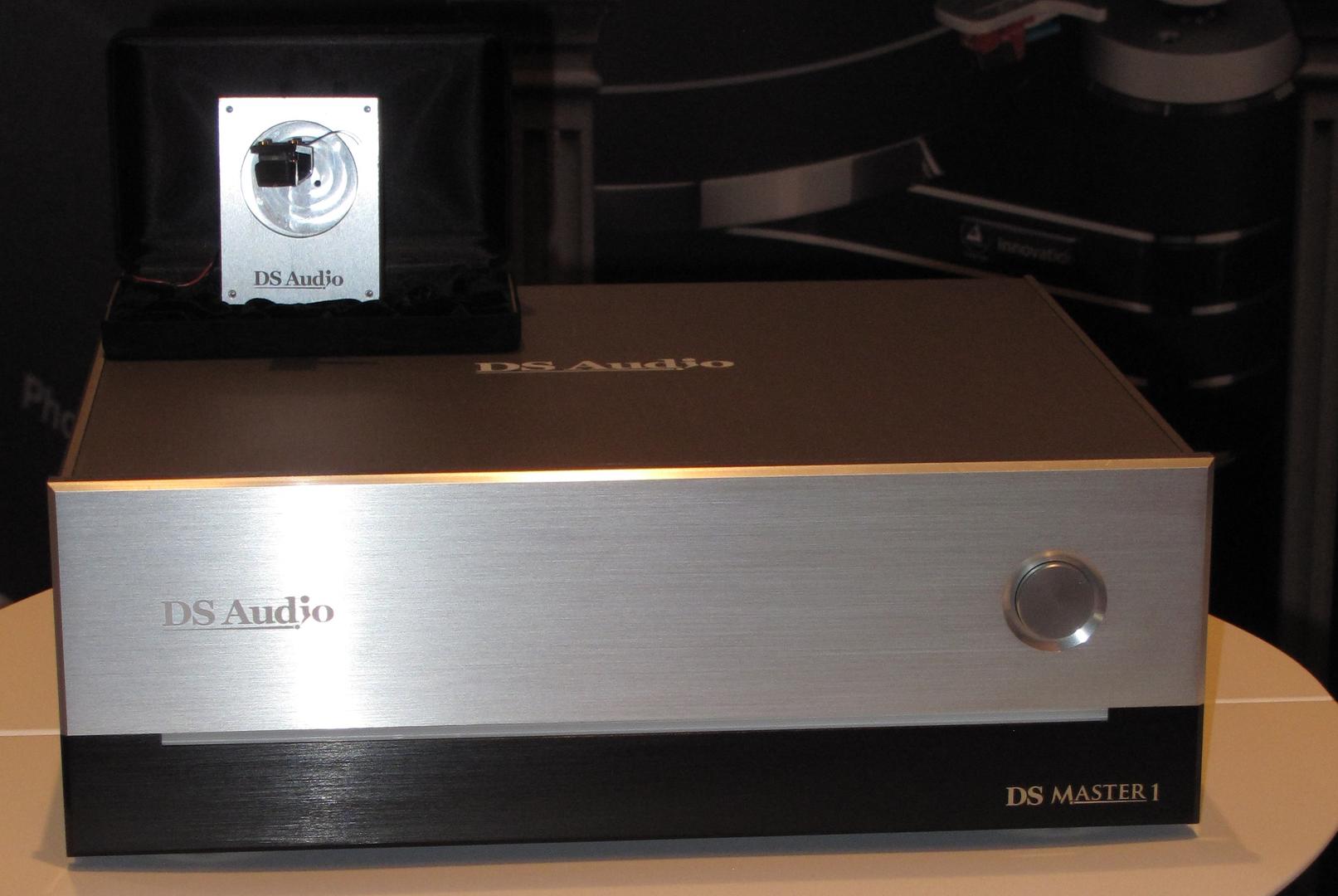 DS Audio introduced the new DS Master1 optical-cartridge/equalizer system. The new cartridge is said to have a more traditional micro-ridge stylus, sapphire cantilever, wire-suspension, and discrete dual-mono equalizer/phonostage assembly that results in better performance. Additionally, the equalizer unit now has more appropriate equalization that matches the RIAA curve in the low frequency thereby lessening the low-bass boost noticed on the original, less costly DS-W1. This option is selected by choosing output on the rear of the equalizer unit. For those who don’t know, the DS Master1 is a complete (and unique) system that replaces the traditional magnetic cartridge and phonostage. The optical cartridge must be paired with its supplied equalizer as the unit uses analog light to replace the magnetic-field generator of a typical cartridge. The entire chain of the signal is analog; there are no digital signals in this design. Given the DS Master 1’s price tag of $22,500, there is stiff competition from standard cartridge/phonostage combinations. Based on listening to the DS Master1 on the AMG Viella ’table with 12J2 tonearm ($17,500), Aesthetix electronics—Rhea Eclipse phonostage ($10k), Janus preamp ($13k), and a pair of Atlas Mono Eclipse Amps ($25k/pr.)—sitting on Critical Mass Systems racks, and Sonus faber Lilium speakers linked with Kubala-Sosna cables, I’d say that the original shortcomings of the DS-W1 optical cartridge seem to have been addressed in this new model. 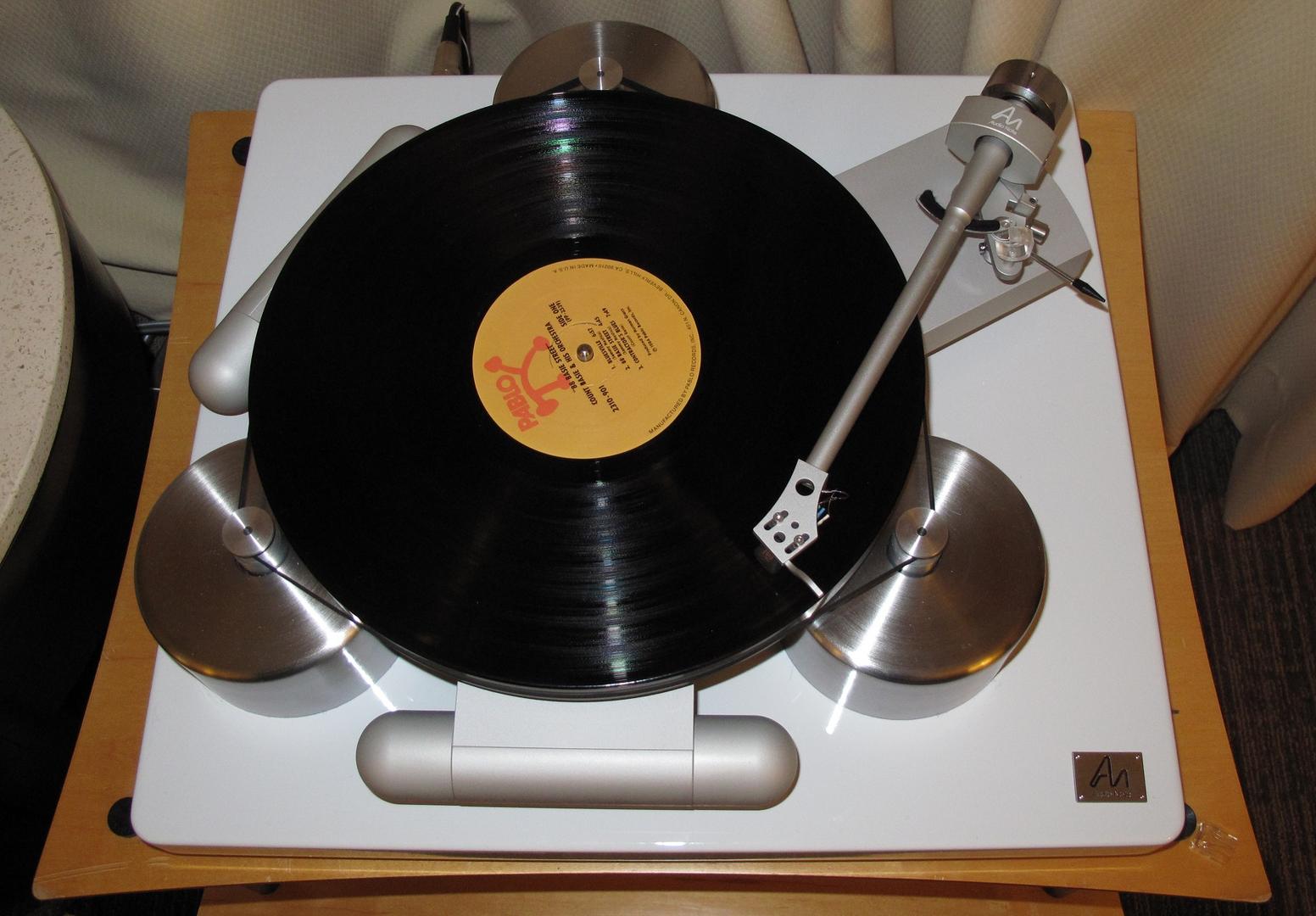 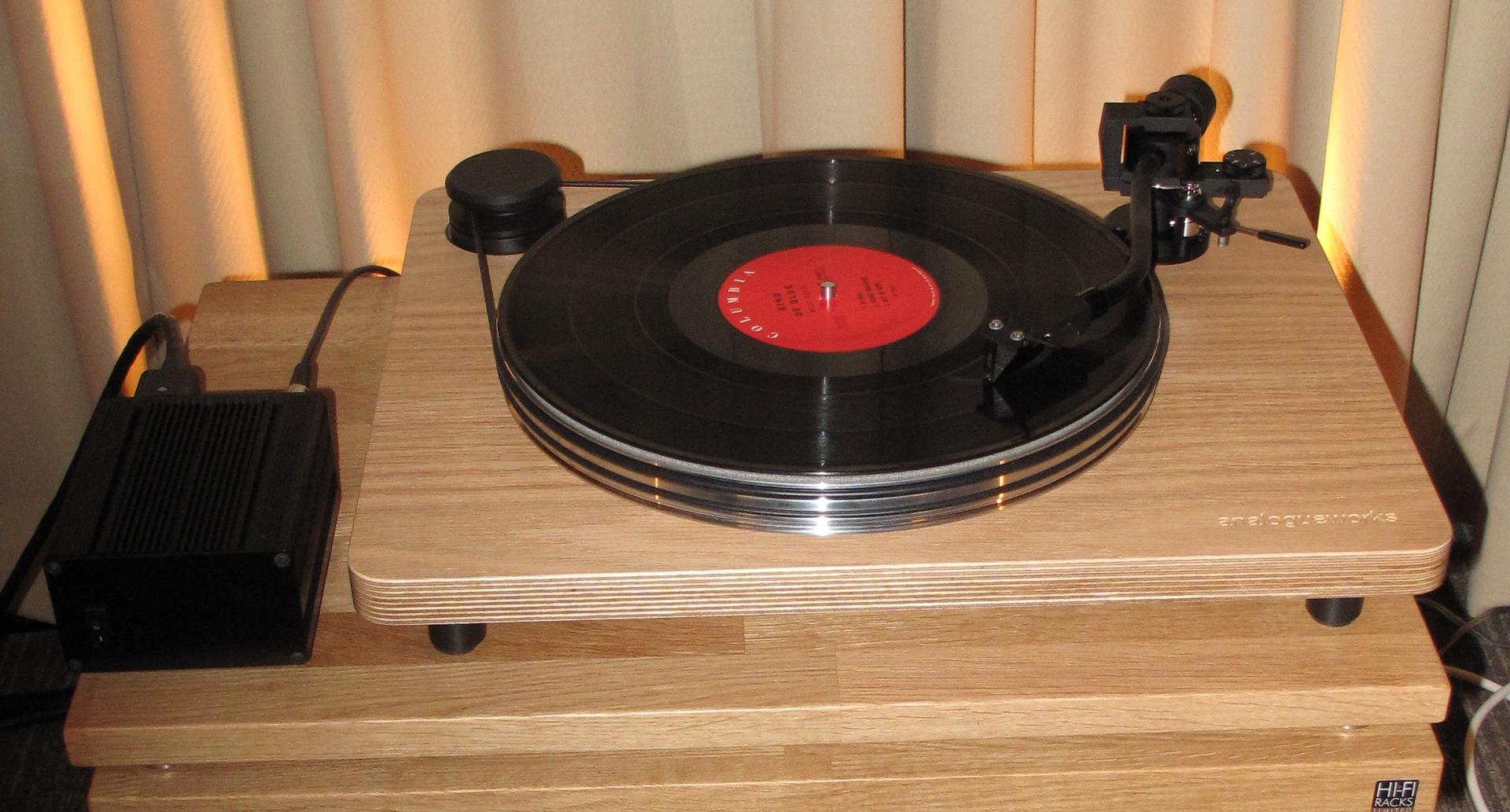 The late Tom Fletcher’s design influence is readily apparent in the (new to the U.S.) Analogueworks TT Zero ’table. Priced at $1995 (including a Jelco SA-750DB ’arm), it fits into the more affordable range of sub-$2000 ’tables. It comes with a 5.5-pound birch-ply plinth, 10.8-pound platter, isolated motor, and separate motor controller. The user gets a choice of veneer finishes for the top of the plinth (birch, oak, walnut, or black oak). Additional ’tables in the line include the TT One, TT One-Twelve, and TT Two. Each model has varying pricing depending on configuration and tonearm choice. 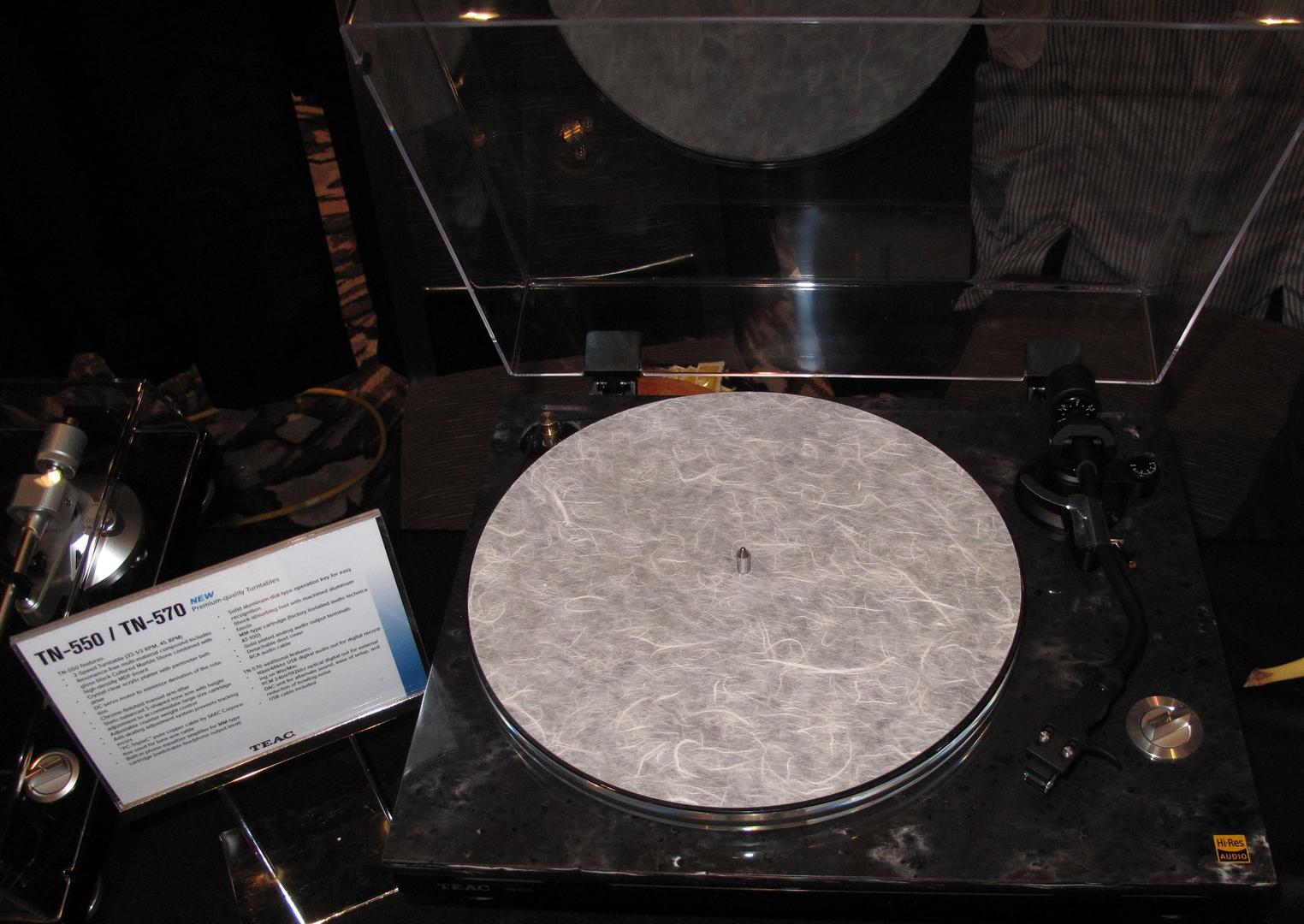 The Clearaudio Performance DC Wood ($5000) ’table due to ship this summer was on display in the Manufacturer’s Showcase area of AXPONA, as well as in an active setup in one of the Quintessence Audio listening rooms. The Performance DC Wood is said to feature a Baltic birch plinth for improved mass and sonic characteristics, locking aluminum cone feet, a ceramic magnetic bearing, decoupled DC motor, and a 40mm POM platter. Several Clearaudio tonearm choices are available. The picture above shows a Clearaudio linear-tracking ’arm while the playback system in the listening room utilized a Clearaudio Magnify ($3750) ’arm and Clearaudio Stradivarius ($3750) cartridge. 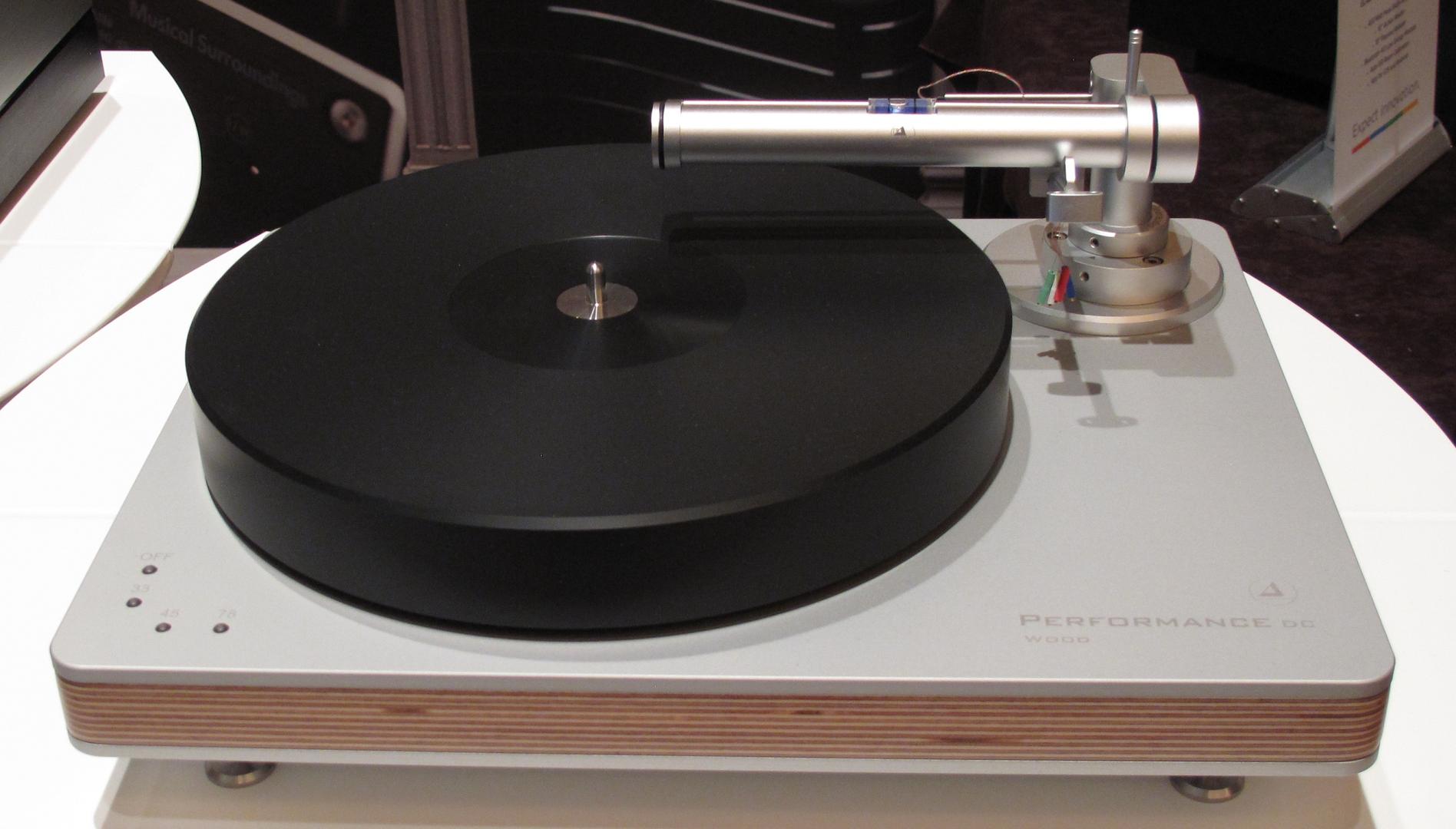 In addition to bringing two new cartridges to the show—the 0.95mV Crimson ($4995) and 0.45mV Colibri Stradivarius with Koa wood and Stradivarius lacquer formula mentioned above—Mr. van den Hul hosted a one-hour “Cartridge Clinic” seminar on Friday, April 15th. Having the opportunity to listen to a well-seasoned (and much-respected) veteran cartridge-maker is something to make time to attend. What was most unique about Mr. van den Hul’s seminar were his practical explanations of the inner workings of a cartridge by way of using a microscope (with the ’scope camera image projected on a large screen) to physically show the audience what he was talking about using a real cartridge. In addition to the part of the seminar mentioned above, Mr. van den Hul gathered a few cartridges from the audience and proceeded to inspect (and repair) a couple of them. In one instance, he straightened a slightly offset cantilever using a small set of specialized tweezers from his toolkit. In another, he aligned the coil former in an effort to adjust channel balance (and improve the crosstalk capability). Novice or professional, this rare event was enjoyed by all. 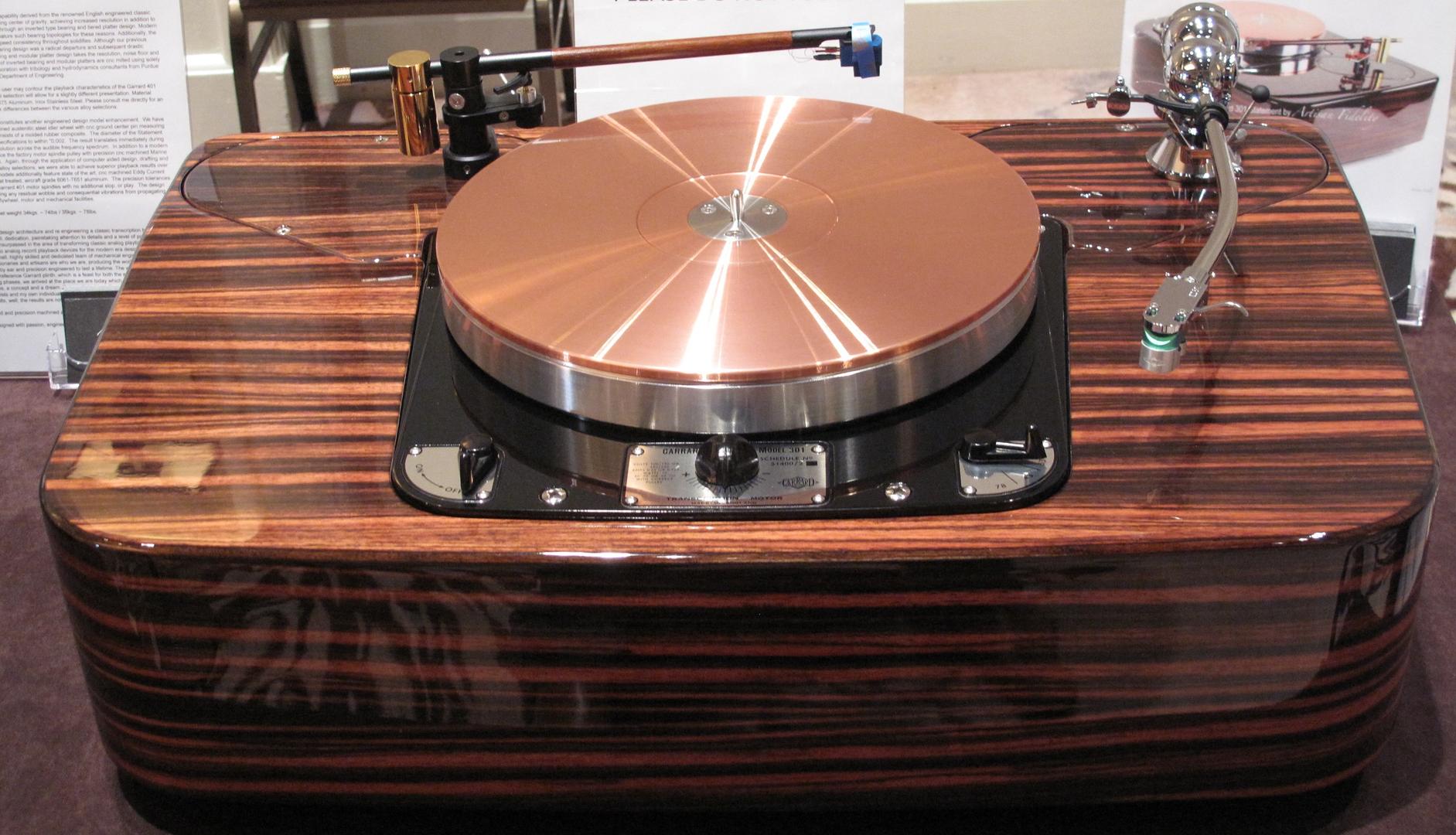 Expressimo Audio showed the A1 Series Remote Control ($35,000) turntable with remote control tonearm in The Marketplace. The unit functions with a small remote that facilitates VTA adjustments from the listening chair. There is a dial indicator on the tonearm tower that allows the user to set repeatable VTA values—a useful feature when seen from close range. From a distance, the ears will have to do. Also in the Marketplace were three beautifully handcrafted, custom-restored vintage turntables from Artisan Fidelity (example pictured above). These custom turntables are works of art that were rebuilt with precision and care. Pricing of Artisan Fidelity restored ’tables can range from $4895 to $58,000. While nothing new in the way of equipment, the reel-to-reel tape playback at AXPONA was, well, unreal. There were mastertape dubs (like those from Acoustic Sounds) and original recordings (like those from International Phonograph Inc.) being played in a few rooms that created extremely good sound.

The TechDAS Air Force III with Graham Phantom Elite and van den Hul Colibri Stradivarius on one end and the Marten Coltrane III loudspeakers on the other end simply because the music I played made the distributor shout four-letter words!

With DS Audio’s DS Master1 optical cartridge system, the competition is stiff in the $20k price range for cartridge/phono combinations. Let’s hope DS Audio has come to play hard in the big leagues.

Good analog players (LP and tape) with decent setups. The most stable overall playback I’ve heard at a show. When the time is taken to get it right, it benefits everyone.

I like dry-aged steaks. It’s a long story and I’m out of ink!