There were a lot of good-sounding loudspeakers costing less than $20,000/pair to be heard at AXPONA 2016, and a lot of them were newly introduced—all the more remarkable as CES had wrapped up just 14 weeks previously. Neil Gader covered this product category for the Las Vegas event, and I’ve done my best to not designate as freshly introduced any of the gear Neil noted as new, though I heard many of those speakers and agree they are winners: Joseph Audio’s Profile ($7000) or the Monitor Audio Platinum Series PL300 II ($14,000), for examples. 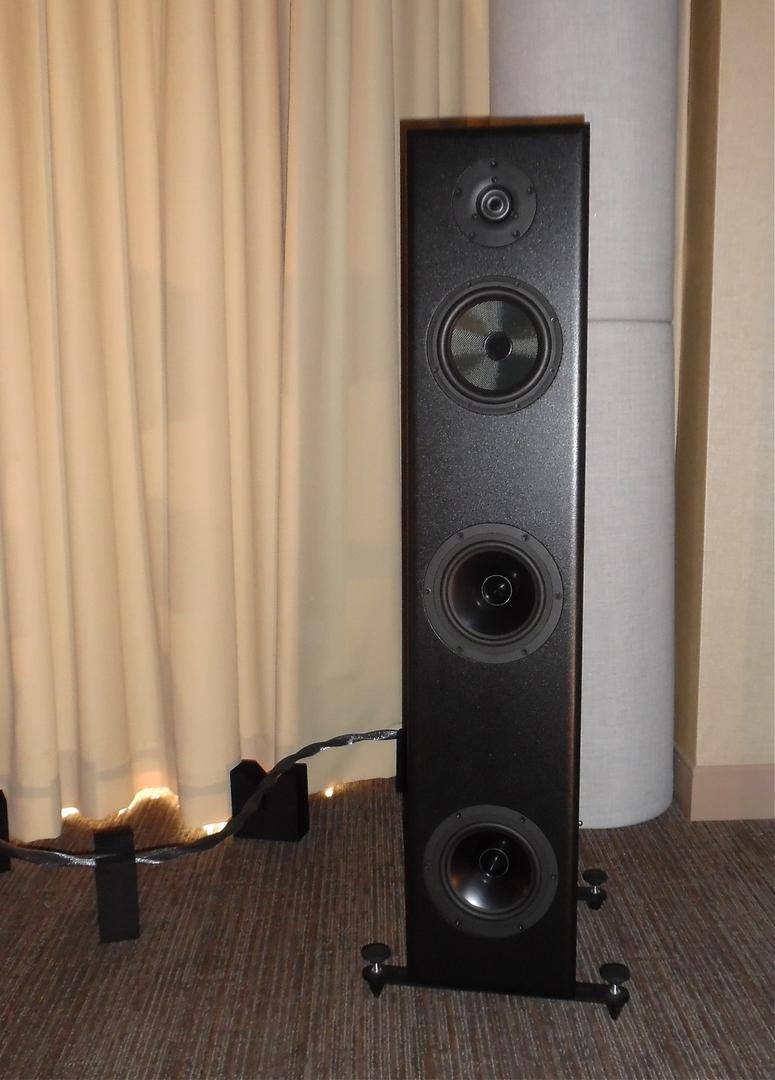 Endeavor E-3 MkII by VSA
In late September last year, Von Schweikert Audio announced the acquisition of Endeavor Audio and a “restructuring” of VSA that brought on Endeavor founder Leif Swanson in a partnership position as VP of Sales and Marketing. Swanson, of course, will also continue to function as a designer alongside Albert Von Schweikert and has made enough improvements to his highly regarded E-3 floorstander to warrant MkII status. With Audio Alchemy electronics before them in the audio chain, the $8000 Endeavor E-3 MkII achieved excellent scaling of voices and instruments; tonal balance was appealing, electric bass was punchy, and vocal sibilants were nicely under control. 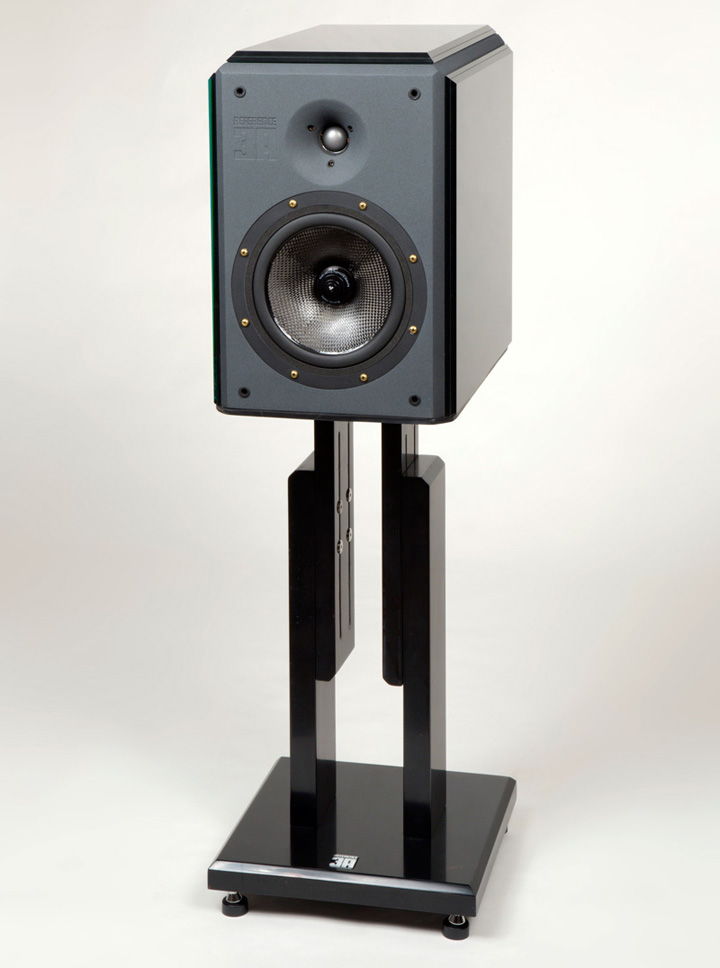 Reference 3A Reflector
New from Reference 3A is its $12,000 Reflector, a two-way, ported stand-mounted design. The Reflector is a substantial loudspeaker (on its stand, 90 pounds per side) constructed to have the most silent enclosure this company has ever produced. Layers of thick glass are incorporated into the speaker’s side panels, and there’s extensive internal bracing, plus tunable brass tension rods to eliminate any flexing of the cabinet walls. As usual, the mid/bass driver has a hyper-exponential geometry, and a beryllium tweeter handles the high frequencies. Frequency response is listed as 37Hz to 40kHz. With Merrill amplification and Magnum cables, I heard satisfying weight with both orchestral and organ recordings; electronica also had impact and a pleasing dimensionality.

Audio Kinesis Bienville Suite and Swarm Subwoofer
REG provided a characteristically thorough analysis (and considered praise) of the Audio Kinesis Swarm subwoofer system in TAS 252. The company has introduced a new full-range speaker, the Bienville Suite, which is sold along with the four-box Swarm at a total cost of $12,000—a lot of loudspeaker-per-dollar. The main speaker employs two 1” waveguide-loaded compression drivers, two 12” mid/woofers, and one 10” mid/woofer; each of the Swarm’s enclosures holds a 10” woofer. The primary design goal is to minimize the generation of early reflections with a highly directional front-firing array and then leverage the “beneficial” late-arriving reflections with a level-adjustable complement of rear-firing drivers. The system is 98dB efficient with an 8-ohm load—it was remarkably dynamic yet not at all assaultive at high levels. 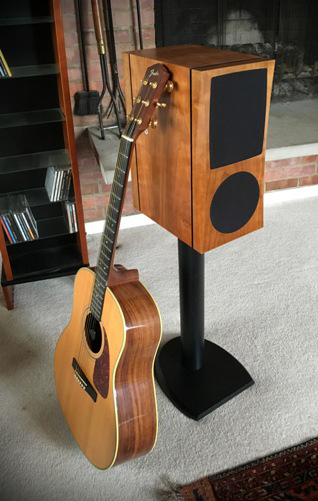 JansZen Audio Carmelita—Active
With the Carmelita ($7890), JansZen Audio claims to have introduced the first active electrostatic monitor. A dual 190Wpc Class D amplifier drives both the electrostatic element and the large-excursion woofer, which delivers flat bass down to 30Hz. The two drivers are crossed over at 500Hz. A volume-adjustable, side-mounted tweeter is theoretically an option, but virtually all purchasers to date have asked for it—it assures the consistency of the Carmelita’s tonality for listeners who are standing or in motion. Imaging was superb. 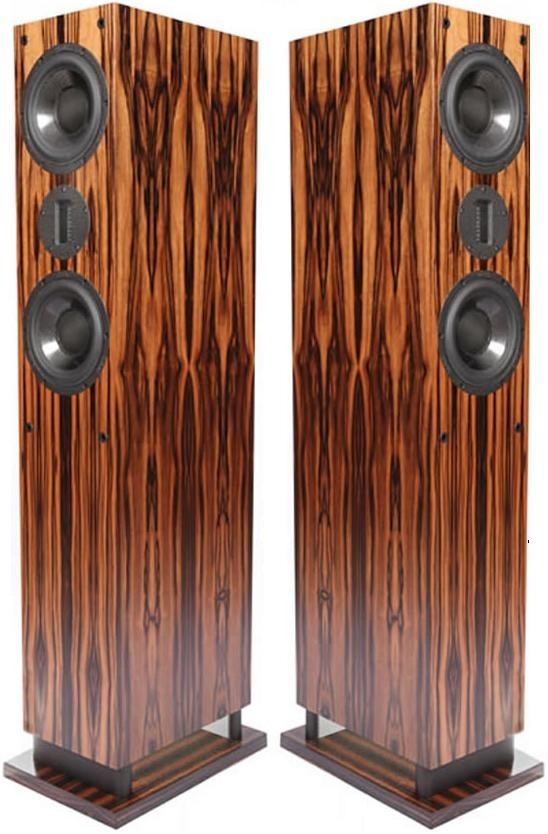 ProAc Response D48R
The ProAc Response D48R ($11,000) is a two-way system with three drivers in a D’Appolito configuration—a ProAc ribbon tweeter between a pair of 6 1/2” bass/midrange cones. Stewart Tyler continues to design ProAcs, as he has for more than 35 years, and the D48R builds upon the success of a line of floorstanders dating back to the early 90s. A nominal 4-ohm load, the D48Rs were driven quite effectively by a VTL S200 power amplifier with digital source material rendered by Naim components and vinyl played on a Rega P6 turntable fitted with a Dynavector 20X2H cartridge. There was no musical genre these speakers didn’t cotton to, and I stayed way too long listening to cut after cut with VTL’s Luke Manley and Ken Christianson, the local ProAc dealer.

Sanders Sound Systems Model 10E
Like its recent forbears, the Sanders Model 10E ($17,000) mates a single (non-segmented) electrostatic panel with a transmission line-loaded dynamic bass driver. As previously, the package includes a digital electronic crossover and the Colorado company’s own Magtech amplifier. What’s new is DSP room correction. The Sanders “Loudspeaker Management System” comprises the room-correction software, a “Real Time Analyzer” that measures the frequency response of the speaker in the room, and the digital crossover—no outboard computer is required for implementation. A short audition was very impressive in transparency, speed, and dynamics. Imaging was practically tactile and, in the hostile environment of a hotel room, bass was well controlled. 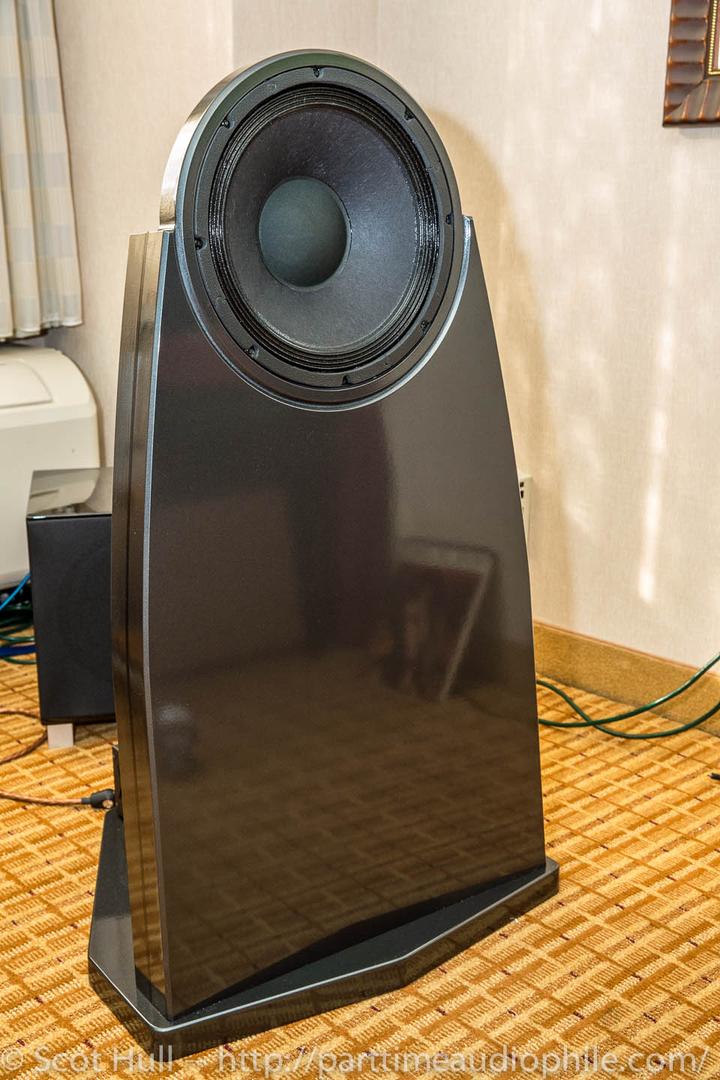 Emerald Physics EP 4.8
Hawaii-based Emerald Physics has been selling open-baffle loudspeakers for close to a decade. The EP 4.8 ($8495) is a highly efficient (98dB) 3-way design employing new 15” and 12” carbon-fiber woofer and midrange drivers, as well as an improved crossover linking them to the neo-polyester-diaphragm compression tweeter that’s a holdover from the EP 4.7. The new drivers, EP’s bass-loading methodology, and the better crossover design get the low-end frequency response down to 25Hz +/-1.5dB. The “controlled directivity” of Emerald Physics speakers make them suitable for smaller rooms and, indeed, music with challenging dynamics and substantial bass information fared well in the far-from-palatial environment of a typical audio show environment.

Spatial Audio M3 MkII Turbo-S
A second open-baffle speaker that impressed mightily was Spatial Audio’s M3 MkII Turbo-S ($2595). This latest iteration of the M3 advances over the “regular” Turbo version by employing an M25 compression driver in which the diaphragm has been treated with titanium nitride. This is said to increase the diaphragm’s stiffness four-fold and thus push its first breakup mode into the ultrasonic range. The speakers played quite loud without any appreciable collapse of the soundstage they generated so beautifully.

Salk Song 3
The Salk Song 3 ($2895), having its “world premiere” at AXPONA, was so new that the model’s name hadn’t yet made it to the demo room’s equipment list. The driver complement includes a RAAC ribbon tweeter, a 4” midrange with a bamboo cone, and a 7.5” papyrus woofer; the Song 3’s ported enclosure measures 9.5” x 40.25” x 14.25” with bass response reported as 33Hz +/- 3dB. With a Lampizator Amber PCM/DSD DAC crunching the numbers and driven by the Wells Audio Majestic integrated amplifier (all wires were Danacables) the sound in the room was very involving—this despite the fact, I was told, that the speakers were not yet fully broken in.

Elac Debut Series B4
When it comes to outstanding value in audio, Andrew Jones’s ELAC products are hard to beat. Jones has been taking his price points ever lower and reaches a new record with the B4, which runs $179/pair. Yes, $179/pair. A 1” cloth-dome tweeter is crossed over at 2.5kHz to a 4” woven-aramid-fiber cone, and while you won’t be playing Götterdämmerung on these 9.3-pound bantamweights (at least not terribly successfully), their power-handling capability was surprising. When Andrew Jones played them loud, the banner hanging behind the speakers danced along with the bass line, moved by the air exiting the B4s’ rear ports.

Revel F36
The Revel F36 ($2000) is the top-of-the-line model in Revel’s Concerto2 series. It was designed for users who don’t have exceptionally powerful amplification but have a room to fill with music. The F36, with a sensitivity rating of 91dB, is a two-and-a-half-way system with three 6.5” aluminum cone drivers in a bass-reflex enclosure plus a 1” aluminum tweeter. I listened to material ranging from Stevie Ray Vaughan to a Shostakovich symphony to Fleetwood Mac, and the F36’s consistently acquitted themselves with honor. A safe recommendation for both up-and-coming audiophiles and “civilians” who just want to enjoy their music more. 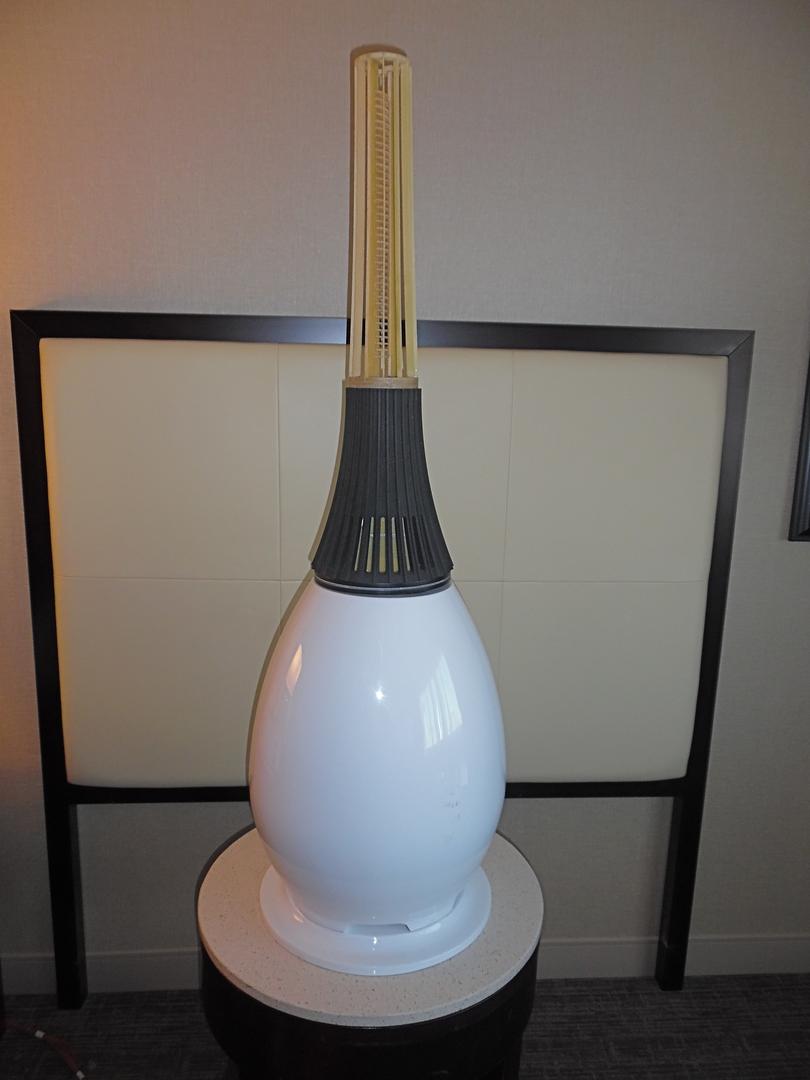 Waveion Model 1
I almost hesitate to mention these speakers because you can’t buy them, and probably won’t be able to for some time. But a half-dozen affable young men with thick Russian accents were holed up in Room 312 with a speaker that looked an awful lot like a giant enema bulb. The basic premise of the Waveion—and the guys were a bit vague on details—is that the device generates positively and negatively charged ions associated with a “pulsatile shaft of air,” which, in turn, generates a 360-degree sound radiation pattern. The Waveion crew only had output from only one speaker and had to give the speaker frequent extended rests. The audio quality was nothing special, but I guess one should be impressed that music was produced. It’s sort of like the proverbial Russian dancing bear: It isn’t how well the bear dances, it’s that he dances at all. Right now, the Waveion’s at the Russian dancing bear stage. Or maybe it’s a Ukranian bear.

Best Sound (Cost No Object)
The monumental Scaena La Maitresse Ultime (Sunny Umrao and his crew were still not close to tearing it down two hours after the show ended) featuring the $125,000 isolinear array plus multiple subwoofer. Orchestral music was presented with a scale and sense-of-occasion as close to a live experience as I’ve heard.

Best Sound (For The Money)
ELAC, of course—the $500/pair UB5. Andrew Jones played a deadmau5 cut at lease-breaking levels and the sound held together as well as with speakers four times the size (and price).

Most Significant Introduction
The Wilson Alexx speaker ($109,000) designed by Daryl Wilson. Possibly the best Wilson yet, a big speaker that—uniquely, in my experience—scales music correctly, whether it’s a full symphony orchestra or a chamber group.

Most Significant Trend
Reel-to-reel tape. There were at least a half-dozen rooms using this medium to demonstrate the gear downstream. Acoustic Sounds is ramping up to sell some great stuff on ¼-inch tape; it won’t be cheap.

Comic Relief/Life Lesson Learned At AXPONA 2016
I arrived at a room to hear a loudspeaker that will remain unnamed. Sitting in the front row was Jonathan Valin, the only listener in a room that apparently was not a very popular destination for show attendees. The speaker was awful and cost exactly $20,000/pair. So who would cover it, JV or me? I posed the question as the TAS Executive Editor got up to leave, placing a friendly hand on my shoulder as he passed. Jonathan didn’t exactly answer my query—but, in that moment, I came to fully understand the value of seniority in an organization.