Although this year was the first time I’ve attended AXPONA, I doubt it will be my last. I was impressed with the quality of the Westin O’Hare venue, despite the fact that most of the demo rooms had some serious and intrinsic sonic issues. John Devore’s room, where the DeVore Fidelity Orangutan O/96 speakers ($12,000US/pr) were driven by the new Resolution Audio C50 50 WPC integrated amp ($4,500US), had the most severe flutter echo I’ve heard in some time. Fortunately, the sound was far better in some rooms (including the Devore room) than I expected, especially when you factored in the room’s intractable issues.

My AXPONA show report will focus on new and freshly introduced digital products, but many current generation digital products from DCS, EMM, Abbington Musical Research, Aurlic, Resolution Audio, Astell & Kern, BMC, Bricasti, Bryston, Weiss, Constellation, Marantz, Resonessence Labs, and others were in use in rooms throughout the show. 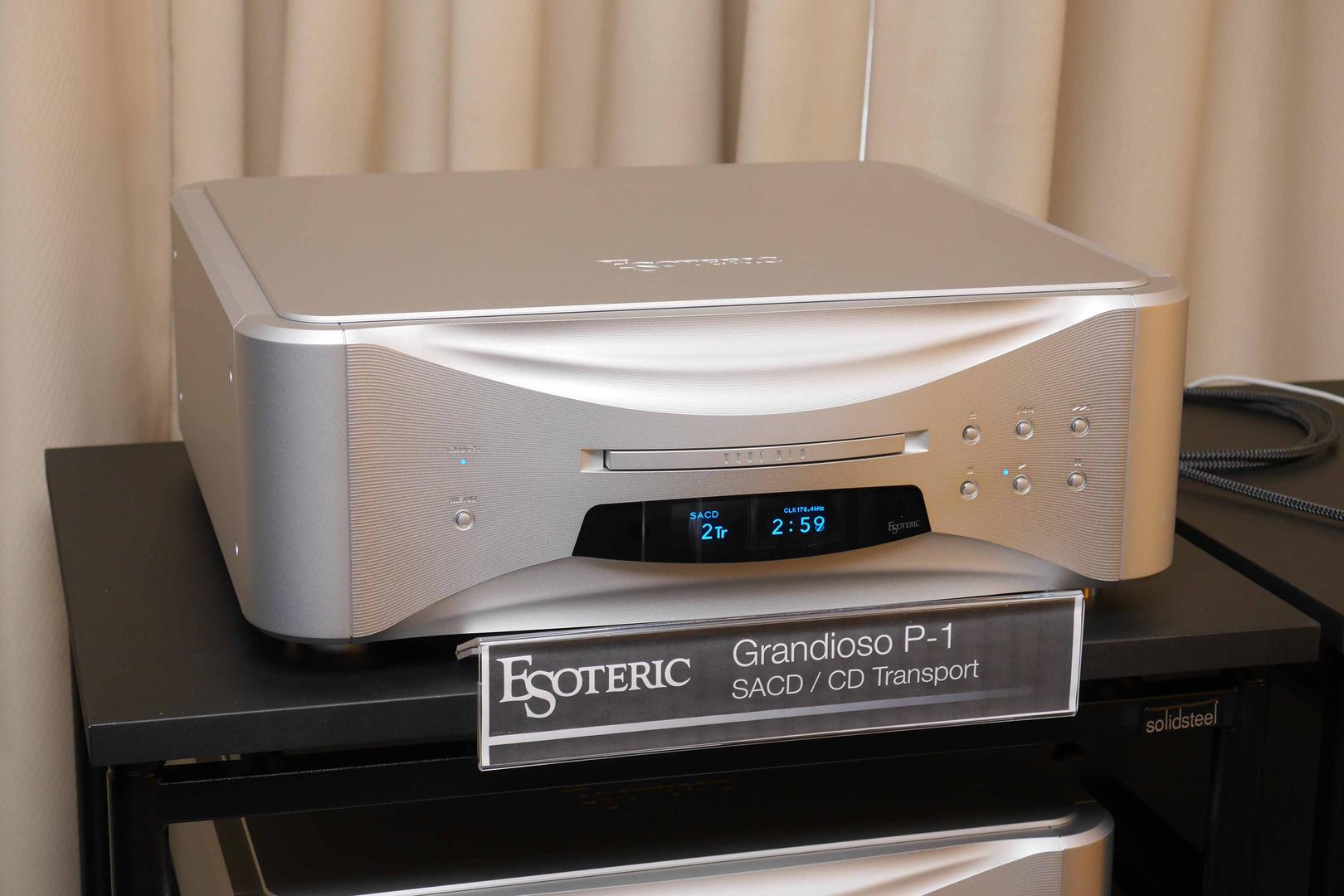 While I hesitate to proclaim, “The CD player is dead!” it was hard to find a room where the primary source was CDs. In a vast majority of rooms the digital source material was on hard drives, and it was tough to find rooms that lacked some form of computer-based playback system and a turntable. The one exception to this was the Esoteric room where the Grandioso P1 super audio transport ($44,000US) was holding court. This two chassis design can handle PCM files up to 352.8 kHz/48 bit as well as DSD. With 32-bit processing, isolated rubidium master clock, VRDS-NEO transport mechanism, and four independent power supplies, the P1 is certainly an impressive engineering statement. Coupled to the dual-mono, two-chassis Grandioso D1 D/A convertor ($44,000US) the system was proof positive that Esoteric isn’t going away anytime soon.

Known for their superb LP remasters, Acoustic Sounds premiered their new Super HiRez download site. With a multiplicity of format options including DSD, 192/24 ALAC, 176/24 FLAC, and ten other sample/bit-rate choices, the material available online includes many classics such as Mile Davis’ Kind Of Blue and Charles Mingus’ Mingus Ah Um. Both of these titles were sourced from Sony Super Audio cutting masters and the DSD conversion was done by Gus Skinas, who’s been responsible for more DSD mastering and DSD conversions than anyone I know.

And while the condition of the masters and the quality of the original recordings are still the primary arbiters of final, overall sound quality on these digital files, regardless of their format…at least Acoustic Sounds is trying to supply the provenance of their digital re-releases so that audiophiles know where the files came from. 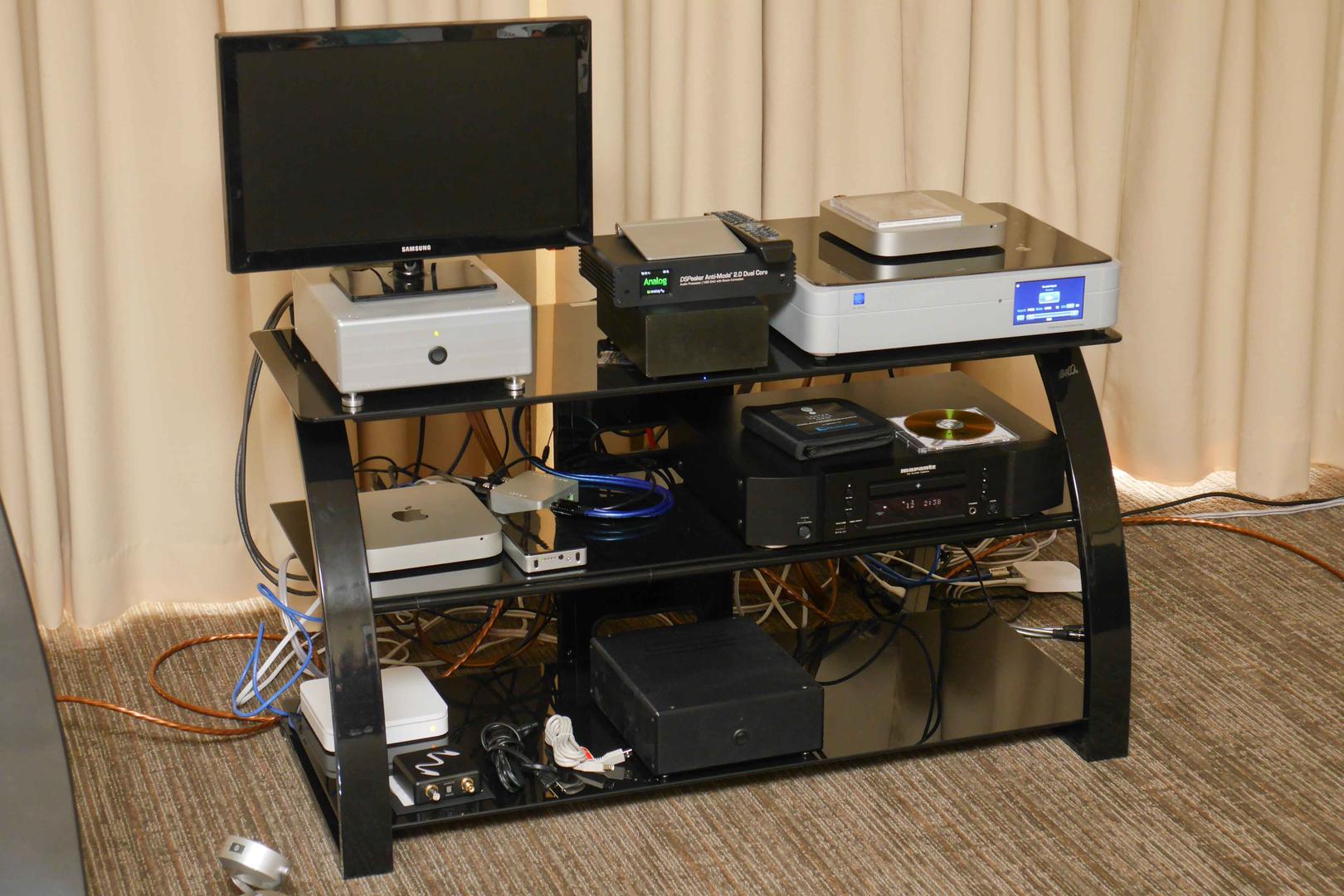 AXPONA was the general public’s first opportunity to hear PS Audio’s Direct Stream Digital DAC ($5,995US). Ensconced in the Emerald Physics room, this radical new design upsamples all digital files whether PCM or DSD to 10X DSD, and then converts that stream into analog. I heard a prototype at the PS Audio listening room driving Paul McGowin’s Infinity IRS system, and was immediately impressed by its non-digital yet highly resolving sonic character. Even under show conditions, and using the modestly priced Emerald Physics CS3 mark II ($3,500US/pr) the clarity and precision of the new Direct Stream DAC was quite evident. 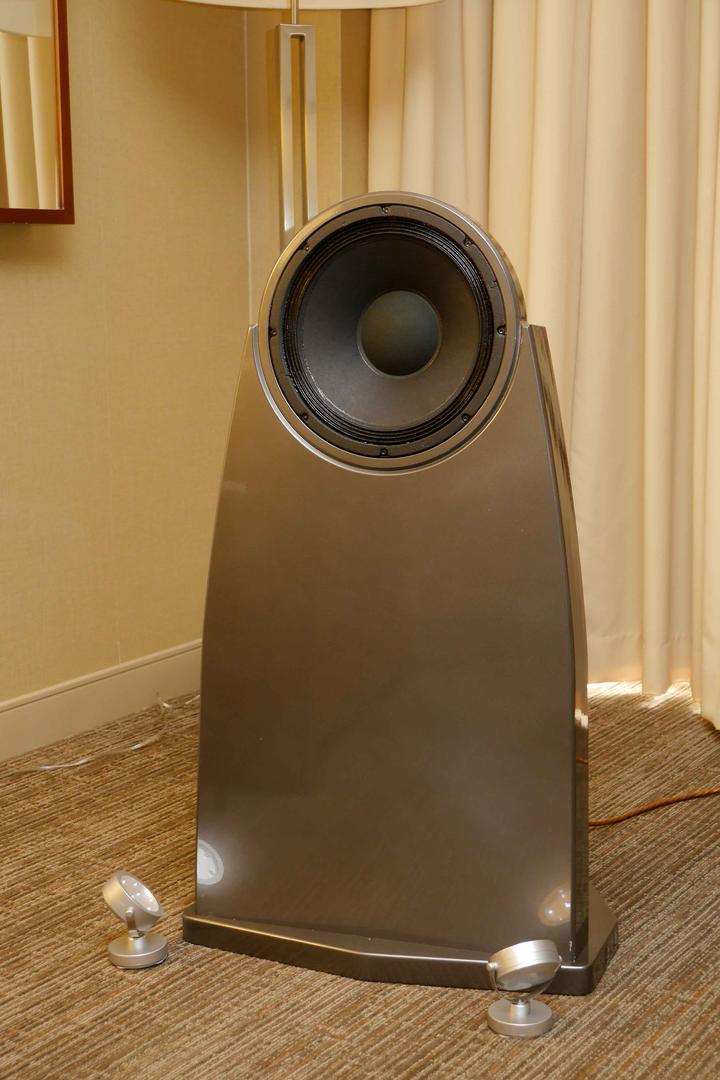 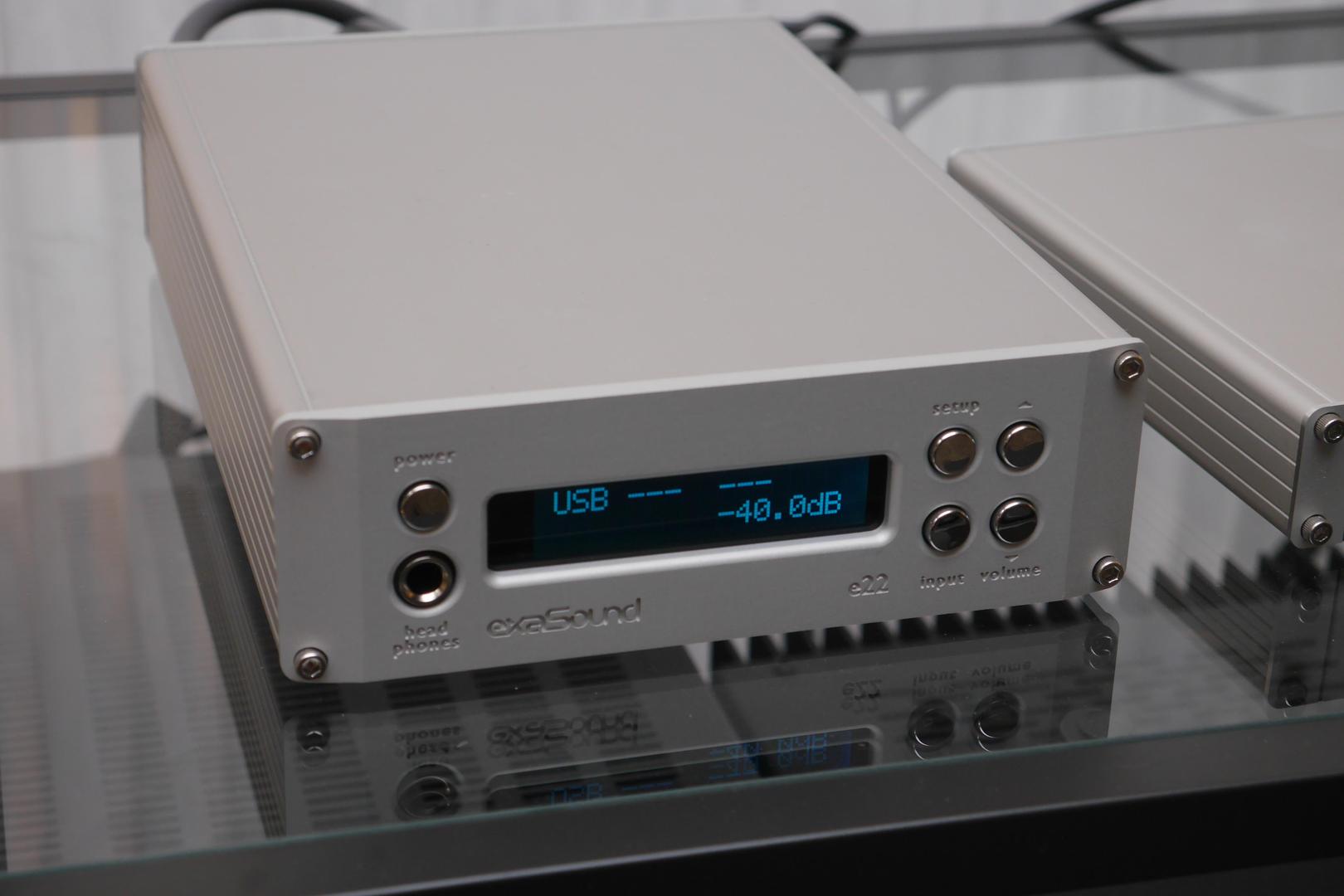 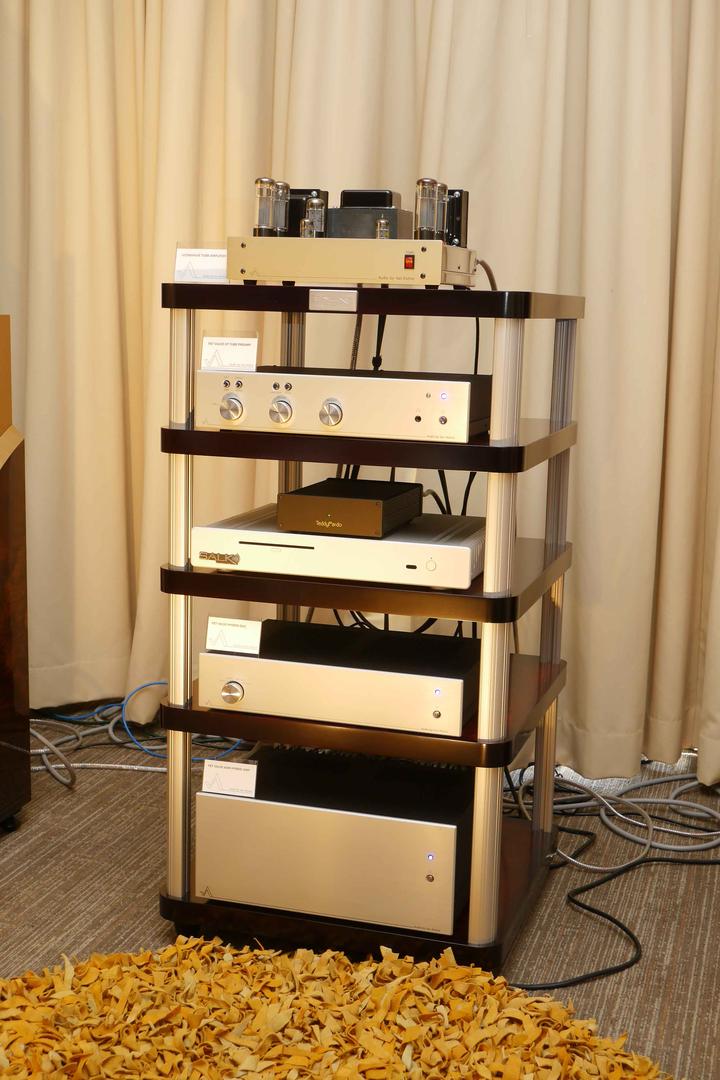 Audio by VanAlstine’s electronics, including their FET Valve Hybrid DAC ($1899US),  sounded exceptionally musical coupled to the latest speaker design from Jim Salk, the Exotica3 ($11,995US). The FET Valve Hydrid Dac has a unique analog filter and can handle up to 192/24 PCM files and a USB input is an option. 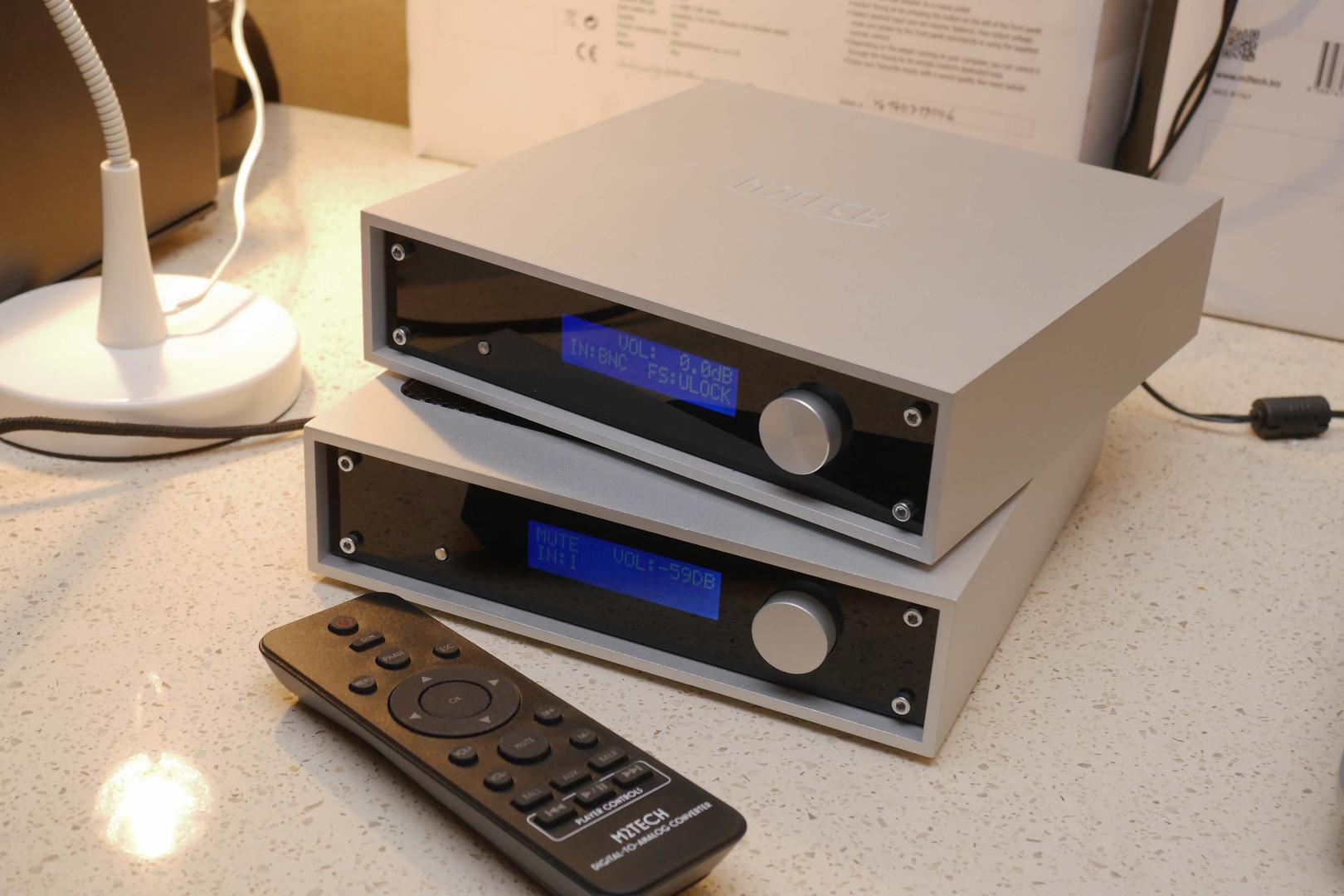 Room 448 was inhabited by Roy Hall and his Music Hall components. I visited it a couple of times and every time I went in the new Ikura turntable ($1,195) was playing and folks were settled comfortably into the room’s sweet spot. I didn’t have the heart to ask Roy to switch over to his new Music Hall c-DAC 15.3 ($549). Equipped with three digital inputs and a disc tray the 15.3 is a logical step up for anyone whose CD player is getting long of tooth and short on digital inputs.

What exactly IS a server, you might ask. For our purposes it’s any device that delivers digital music files to your DAC. Some servers also have DACs built in, but most of the higher performance units are designed to be used with an external DAC. The goal of a server, from an audiophile point of view, is to get music from point A-storage, to point B-your DAC, with no variation from bit-perfection and with as little in the way of time-based errors as possible. Most servers work either via an Ethernet connection or via Wi-Fi, which can introduce its own connection issues and sonic compromises in less than optimal configurations. I expect to see an ever-increasing number of server-type products in the future as audiophiles demand more portability, flexibility, and playback options from their computer music libraries and streaming sources.

Source Systems, Ltd, rounded up several cutting-edge digital products from the Spanish company, Digibit. The Aria music server upgrade kit for the Oppo BDP-105 and 105D ($1,195US) turns an excellent universal player into a fully featured music server. Contained on a single, internally mounted, computer board, the Aria server operates via an iPad app. The app automatically finds all your DLNA compatible drives in your local network. You can also use the the supplied copy of dBpoweramp to rip to your library from any local network-aware PC. Once you do rip a disc, the Aria software adds metadata to “extended” fields (compared to iTunes or Gracenote) via five different metadata sites.

Digibit’s second product debut in the US was their Aria DL DSD music server ($5,200US base price). It supports 384/32 bit PCM as well DSD and DXD formats and can accept up to 4 TB internal hard drive or 2 TB SSD drive. Classical music fans will find that with eighteen different metadata fields which include period, style, instrument, conductor, orchestra, soloists, and label, that finding music will be much easier than with iTunes. The Aria’s digital outputs include USB, S/PDIF. AES/EBU, and i2s. 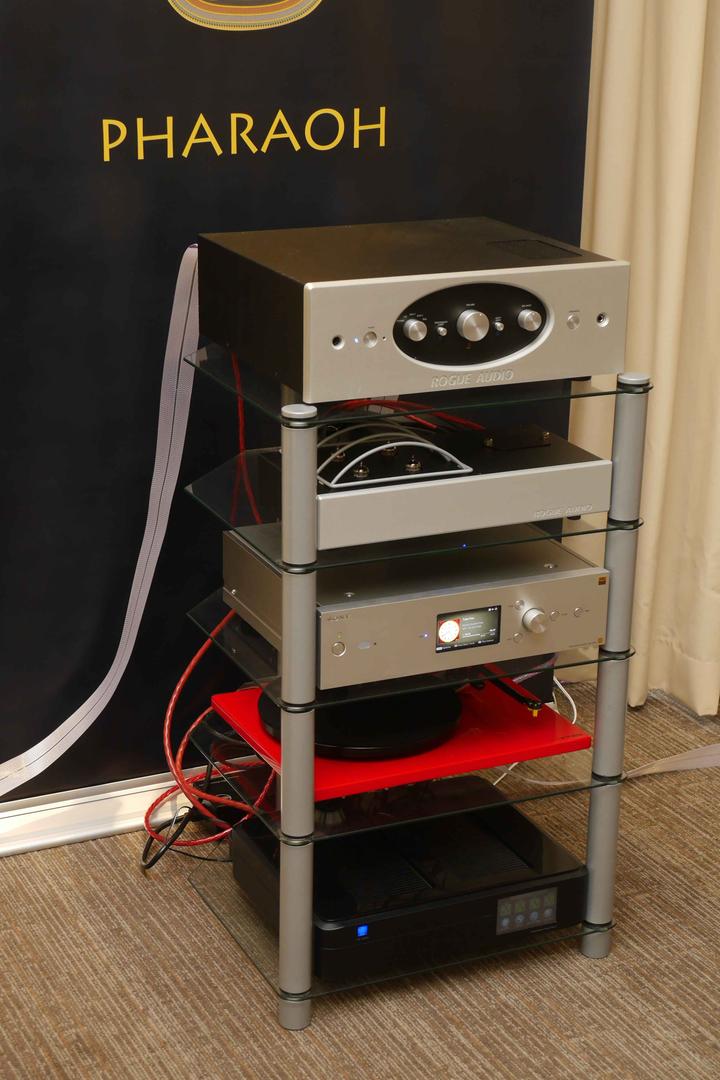 The phenomenal, and so popular that it’s hard to find one to buy, Sony HAP-Z1ES ($1,995US) was available for auditioning in several rooms. Sony had one in their room on the 12th floor as part of an all-Sony system. Every time I stopped by the room it was full to overflowing. Daedalus Audio was using a Modwright ‘Truth’ modified HAP-Z1ES ($2,995US for modification) as a front end to showcase their Argus version2 ($12,950US) full range floor standing speakers. The Modwright mod includes an all-tube, transformer coupled analog stage as well as an external tube-rectified power supply. With WyWires Platinum interconnects (from $1495US), Silver Series power cords (from $399US), and Silver Series USB and S/PDIF digital cables (From $429) I was impressed by the system’s overall musicality and dynamic power. Rogue Audio was also using the HAP–Z1ES coupled to the Rogue Pharaoh ($1,999US) and Rogue Ares ($3,495US) driving the Dali Epicon 6 speakers ($13,995US) and wired throughout with Nordost cabling. All three systems displayed the HAP-Z1ES’ ability to render music in an organic and natural way that allows the natural dynamic flow of the music to emerge unencumbered by any trace of digital edginess. 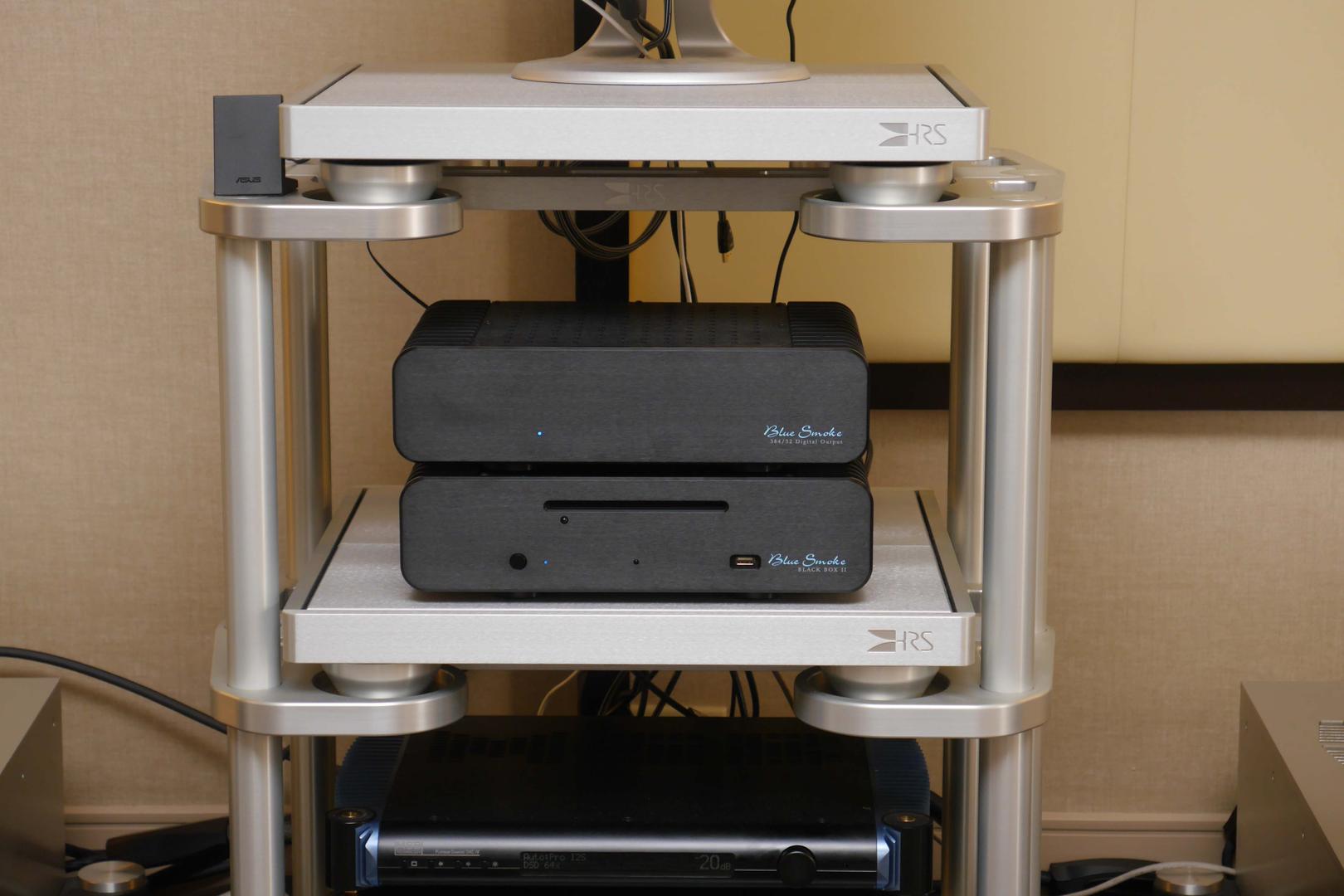 In room 422 (moved from the 12th floor because their originally designated room had no drapes) Blue Smoke had their latest 384/32 digital output box ($2,995US). This box takes in a USB signal and outputs SPDIF, AES/EBU, or MSB Pro I2S signal. With thermal and electrical isolation, multiple clock options as well as an external clock port, the 384/32 digital output box eliminates the issues associated with USB-connected computer audio. The 384/32 digital output can be connected to an off-the-shelf Mac or a PC, but Blue Smoke also makes their own dedicated music computer which is a custom-built, silent, Windows 8.1 platform called the Black Box II ($3500US base price). Blue Smoke has a strong working relationship with MSB and offers MSB designed upgrades including a Femto clock upgrade ($4,995US), and femtosecond galaxy clock upgrade ($9,950US). 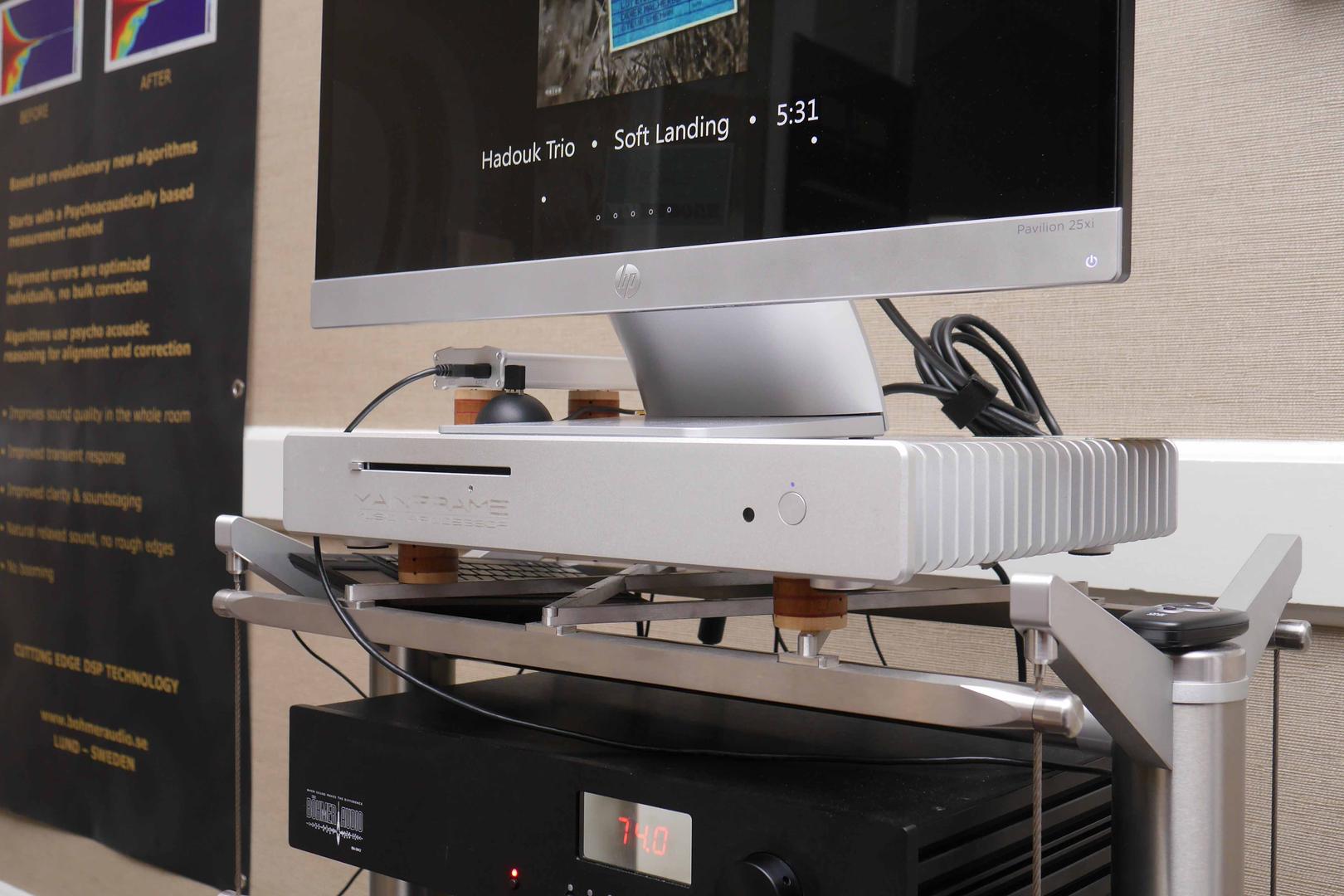 Scaena’s Sunny Umrao gave me a quick demo of their new Mainframe server ($3900US). It employs a system that vastly reduces interrupt’s pernicious sonic effects, not by limiting traffic or user functionality, but by using a much larger data pipe so that interruptions are no longer an issue. Battery powered, the Mainframe is, according to Scaena, “the first music server to offer end to end error correction, and many other firsts, more information to be announced shortly”.

I walked past the Sim Audio room several times before entering on Sunday, primarily because the sound pressure levels in the room were too darn loud. But when I finally gave a listen at more sane volumes I was impressed by how good the SimAudio Moon Mind 180 ($1300US) sounded as a front end for what was a particularly high-end system. The Moon Mind 180 was connected to the SimAudio 750D Dac/transport ($14,000) with a SimAudio 820S power supply ($8,000US), Sim Audio 850P preamp ($30,000US), and SimAudio 880M monoblock power amplifiers ($45,000US/pr) driving the Dynaudio Evidence Platinum speakers ($85,000US/pr) and wired with Kubala Sosna cabling throughout.

Channel D introduced their latest update to Pure Vinyl version 4 just before AXPONA and Rob Robinson demonstrated the new software both in his room, coupled to the Lynx HiLo ($2,495US), Hegel H20 power amplifier ($5,750US), Bag End 12E subwoofer driven by an Emotiva XPA200, and Joseph Audio Pulsar speakers ($7,700US/pr) and in his vinyl-ripping seminars. Channel D’s room was the first room I visited on Friday and the last one I entered on Sunday. Both times I was impressed by the system’s overall lucidity, dynamics, and overall resolution. 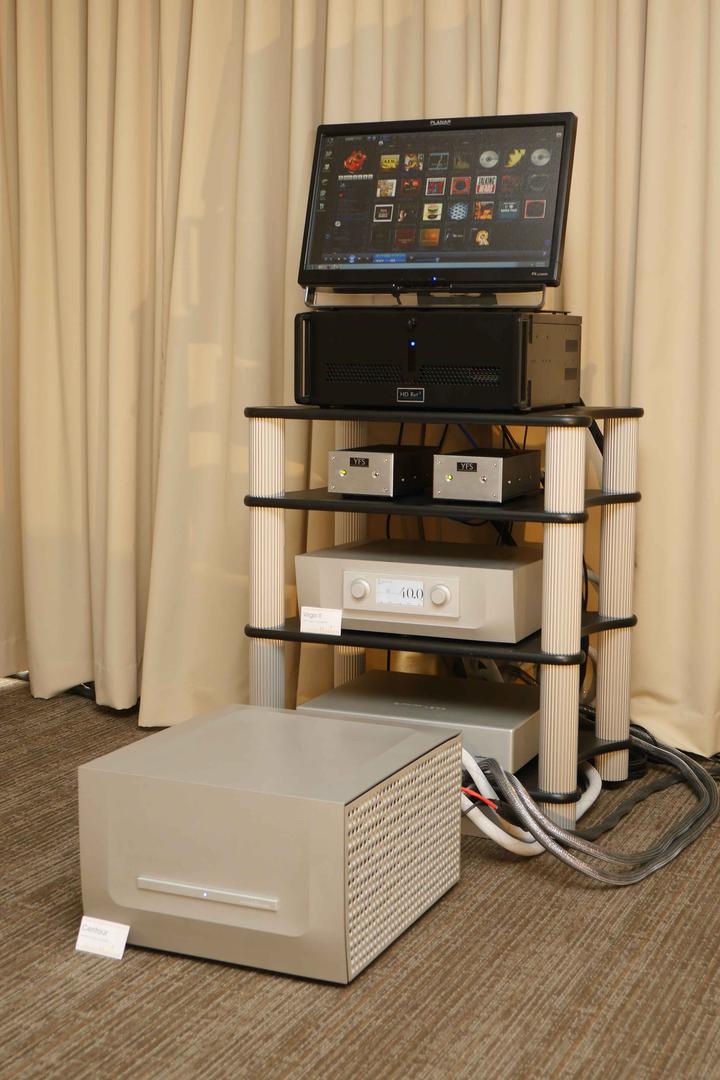 Endevor Audio Engineering used the latest version of the YFS (Your Final System) Ref-3 music server transport system ($15,500US) which includes a 22” touch-screen monitor and 10.1” table for control. Combined with the EMMLabs DAC2x ($15,5000US), Constellation Virgo II preamplifier ($25,000US), Constellation Centaur power amplifier ($27,000US) and Endevor E-3 speakers ($6,995US) this was one of my candidates for best sound at the show. The Endevor E-3 speakers seemed underpriced based on their performance, and they could emerge as one of the best values in floor-standing speakers under $10,000 that I’ve heard in some time. 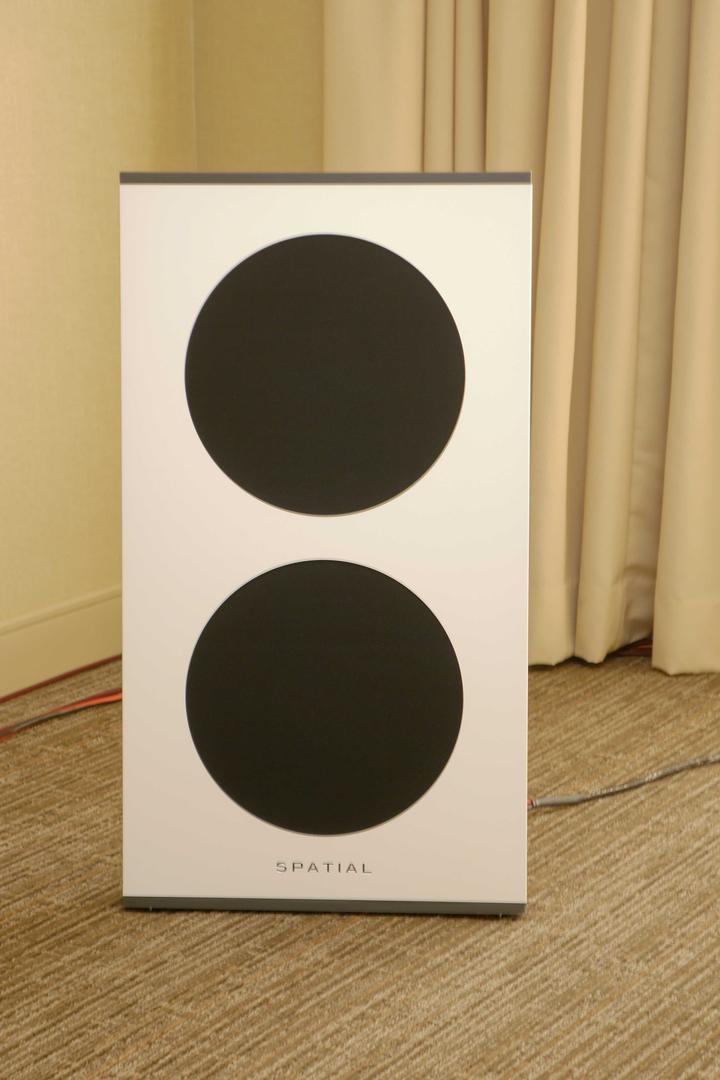 The Best Sound (For the Money) – It was a dead heat between the Emerald Physics CS3 mark II ($3500US/pr) and the Spatial Hologram M2 ($2,000US/pr) rooms. Clayton Shaw designed both speakers which conquered their hotel room sonic shortcomings with aplomb.


Most Significant Product Introduction – PS Audio’s new Direct Stream Digital DAC ($5999) which upsamples all digital sources, whether PCM or DSD, to 10x DSD and then uses DSD processing to decode them into analog makes the format of the original file irrelevant.


Most Significant Trend – It was almost impossible to find a room that didn’t have at least one turntable. Many rooms had multiple turntable set-ups. It was quite obvious that the LP isn’t going away any time soon.


Most Coveted Product – Every time I pulled out my Astell & Kern AK240 ($2495US) it garnered interest. At the airport on the way home even my seatmate asked me about it. The A&K 240 sounded superb tethered to the Ultimate Ears IERMs ($995).