In the bad old days of high-performance computer-based audio there was only one way to do things, and it always revolved around a computer. Even the Sony “stand-alone” HAP-Z1ES digital playback system I reviewed years ago needed to access a computer to rip CDs and acquire new files. How about a “stand-alone” digital audio system that is truly stand-alone? A one-box solution where you can rip, store, access streams, and never, ever, connect with your home computer or NAS unless you really want to? Aurender has an app (and a component or two) for that.

The Aurender ACS10 was created to be an almost-complete one-box solution. It’s a stand-alone digital hub designed to interface with an external DAC via a USB connection. Merely add the USB-enabled DAC of your choice and you have an entire digital front end capable of doing virtually anything and everything a computer/NAS/streamer system can do and more.

Technical Description
The Aurender ACS10 is, in essence, a dedicated audio computer. But unlike a general-purpose computer, this one has been optimized for music acquisition, playback, and storage. It uses an Intel CPU that was specifically chosen for its balance between processing power, low heat, and low EMI noise. USB is isolated and filtered and handled on a different board separate from the CPU. Unlike most computers, the ACS10 uses a linear rather than a switching power supply and then couples it to a supercapacitor uninterruptable power supply to stabilize the ACS10 during sudden power outages. The optical CD drive is manufactured by Teac. 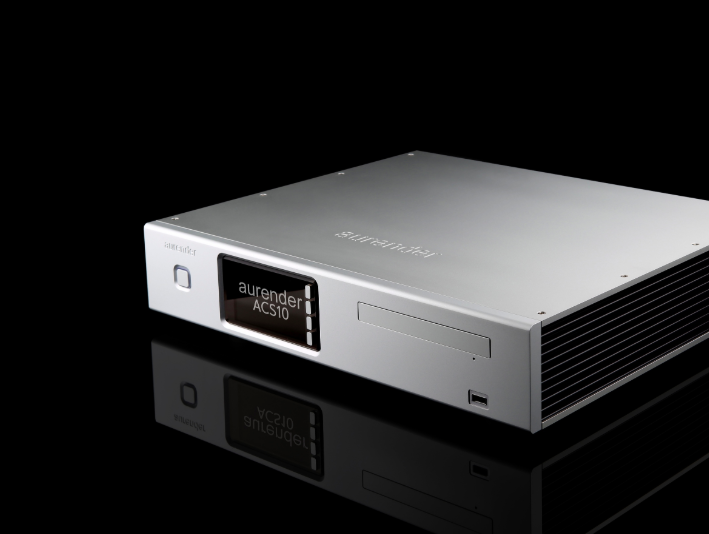 Another one of the ACS10’s important technical features is its “2X isolated LAN port,” which is one of three Ethernet ports provided. This port delivers superior isolation from network noise compared to the two other ports, according to Aurender. ASC10’s USB ports are 3.0 spec, so they can allow for the fastest available copying from external USB drives.

Setup
During the initial setup I had assistance from Ari Margolis, Aurender’s U.S. technical representative, who also loaned me an iPad to use as the ACS10’s remote control. Installation was simple: Connect the ACS10 to an Ethernet network, open up Aurender’s ACS Manager app on the iPad, and then add all your music file locations so the ACS10 can begin to transfer them to its own internal hard drive. I mentioned earlier in the technical description section how the ACS10 is a “closed” system. It’s “closed” because it plays only what has been brought into its own hard drives (or via a streaming source), with the exception that it will play from a directly attached USB drive.

For the review Aurender loaned me its ACS10-16TB, which has two 8TB drives as well as one 250GB SSD drive and lists for $6000. The ACS10 is also available with larger hard drives (ACS10-24TB at $7500) coupled with greater DRAM memory capacity for additional monetary outlay.

The ACS10 has one way and only one way to connect to the outside world, and that is via a hard-wired Ethernet connection. The ACS10 does not offer a Wi-Fi option for connection because Aurender feels that a wired connection is a far more reliable and more stable option than Wi-Fi.

It took most of a day for the ACS10 to copy over my music files from my NAS and iTunes library locations and complete its own library and database builds. Once complete I could access the music files from Aurender’s “Conductor” playback app.

Aurender recommends that you always follow a proper shutdown procedure, which lets the unit turn itself off in a computer-friendly manner. But twice during the review period, squirrels “powered down” my entire home’s power rather abruptly by gnawing through some wires outside. Despite the power interruptions the Aurender ACS10 suffered no noticeable issues.

The Aurender app itself is quite good. Perhaps not quite as inclusive or feature-rich as the Roon app, but darn close. Roon offers more “connectivity” due to all its “spidering” internal links, metadata connections, and search functions. I would certainly put the Aurender app on a par with Amarra, Pure Music, or Audirvana in library functions, search options, and overall ergonomics.

Nowadays you can assemble a streaming device via the do-it-yourself route for a fraction of any manufacturer’s complete solution. But what you save in monetary outlay you may well lose in time and ergonomic elegance. Sure, your DIY solution can sound good and work well, but unless you expend a boatload of time, or just happen to be one of those computer whizzes who can write code as easily as breathing, DIY can be a rabbit hole that you may find a bit too deep to explore comfortably if your end goal is to listen to music rather than to explore computer science. And, yes, there are relatively inexpensive components that can accomplish much of the ACS10’s functionality, but without the elegance of Aurender’s excellent app. There are also Roon-compliant streaming devices (if you are a Roon subscriber) that can offer a roughly equivalent ergonomic experience.

Currently the Aurender apps will not run on anything other than an iPad (an Android version was released just as this issue was going to press). I mentioned earlier that my iPad came with the review sample for use during the review. It certainly delivered much easier-to-decipher graphics and more options on the screen than Roon on my iPhone SE, but it does add one more device to look after. Also, being forced to use an iPad was at times less convenient than just grabbing my phone, and it ups the initial acquisition costs if you are not already an iPad owner.

The ACS10 has only USB outputs, so it requires a DAC that is configured to handle USB inputs. If your DAC is equipped with only SPDIF, TosLink, or AES/EBU digital inputs it will not be able to connect successfully with the ACS10 (unless you use a USB-to-SPDIF adapter, which would introduce an additional element into the sonic mix). If you require SPDIF, Aurender has its N10, which has optimized SPDIF digital outputs.

Sound
The primary reasons that the ACS10 is a closed system rather than a UPnP-compliant open system is for the control over all internal processes that a closed system can offer. Aurender’s position is that it can deliver superior stability with a closed system compared to an open one. During the review the ACS10 was tethered to the Mytek Manhattan II DAC’s USB input from the ACS10’s USB output.

All the D/A and USB conversion functions were performed by the Manhattan II’s DACs, as would be true of any DAC connected to the ACS10. When I compared Tidal, Qobuz, and my own hi-res and Red Book music files played back either via the ACS10 or via Roon or MControl to the also-Ethernet-tethered Mytek Manhattan II, I could not discern any sonic differences between the two different signal sources. At the worst I found the Aurender ACS10 using the Aurender “Conductor” app the sonic equal to the Roon-connected source during my listening sessions.

But due to the fact that all sources were processed through the Mytek Manhattan’s USB and D/A circuitry, were any sonic improvements wrought by the ACS10 lost in translation, so to speak? Could be. But since the whole point of purchasing the ACS10 is to use it with an external stand-alone DAC of your choice, the final sonic results will always be a combination of the two devices’ sonic signatures.

After multiple listening sessions spread out over long periods of time, I was forced to conclude that either the Manhattan II is incapable of differentiating between the two sources, or the differences that existed were too miniscule to be sonically noticeable on my current system, or, lastly, there were no appreciable differences between the ASC10 as a source and a Roon RATT stream source sent directly to the Manhattan II DAC/pre.

There’s a phrase, coined by the acoustic engineer and guitar builder Ric Turner, “phase complexity,” that he uses to describe the real-world experience of a human processing the complex phase information present when sitting in front of a symphony orchestra at a live performance. Every instrument arrives at our ears from a slightly different height and direction, but our ears can still distinguish each individual part’s location within the whole. Our ability to decode phase information accurately is a part of how humans survived before that time when we became Earth’s alpha predator. Playing back my own live concert recordings of the Boulder Philharmonic as well as my field recordings of bluegrass instrumental groups through the Aurender ACS10/Manhattan combo I could decipher more of this subtle phase information with less effort. Listeners who are equally sensitive or have recordings with accurate phase imbedded within them will be impressed by the ACS10’s ability to retain and transmit this subtle sonic information to their DACs. Through the ACS10/Manhattan combination I could clearly hear, due to the accurate phase information, how a symphony orchestra breathes during a live performance.

Summary
Whether the Aurender software/hardware closed system will suit you better than a Roon/Roon-compatible streamer solution depends on a number of factors, not the least of which is whether you are comfortable with the feature set of the Aurender ACS10. The second major factor to consider is what kind of music system you are most compatible with. The Aurender “closed” system offers high reliability and smooth integration but at the expense of some flexibility.

From a user standpoint the Aurender Conductor app has a much higher level of metadata density than iTunes or other playback apps that rely on Gracenote’s database, almost at the same level of rich cross-reference capabilities or album note information available via Roon.

Because the ACS10 must be used in conjunction with an external and independent DAC, the final sonic result will always be a combination of the ACS10 and your DAC’s sonic capabilities. Whether you will discover that the ACS10 is a sonically superior source when compared to your current USB signal chain will be affected not only by the ACS10 but also by your DAC’s internal USB signal-handling. But if your goal is to acquire a streamer source that will deliver the highest possible sonic quality currently available from higher-resolution streaming sources, handle all the ripping and storage, and do it elegantly, you will be hard-pressed to find a better, more comprehensive self-contained hardware/software option than the Aurender ACS10.