For any audio company, making the leap from the desktop to the listening room is not the simple, slam-dunk proposition it might appear to be. The goals are often at odds with each other and require different skill and feature sets. The desktop experience is more intimate and personal, while the listening room is more inclusive and often shared. Audioengine, however, is not just a loudspeaker company. With an innate grasp of the market, its strength as a desktop and personal listening specialist involves a panoply of products from powered speakers, to DACs, to wireless systems, to accessories, and cables. The new HD6 loudspeaker is arguably the most versatile piece of gear Audioengine has come up with yet. Powered, DAC-equipped, and Bluetooth-enabled, the two-way HD6 is comfortable on a desk or shelf, or flanking a flat panel, or set out in the room on a pair of stands. The HD6 is a crossover product like few others.

The $749-per-pair HD6 is more than an attractive loudspeaker. Much more. It’s a complete audio system that only needs a source as humble as a smartphone to it get up and running. Separate components and wires? Thanks to the HD6’s built in Bluetooth you won’t need ’em. Or perhaps you’d like to hook up an old-fashioned source component like a CD player or even something really ancient like a turntable via a phonostage. No worries—there’s also a pair of analog inputs. No muss, no fuss. 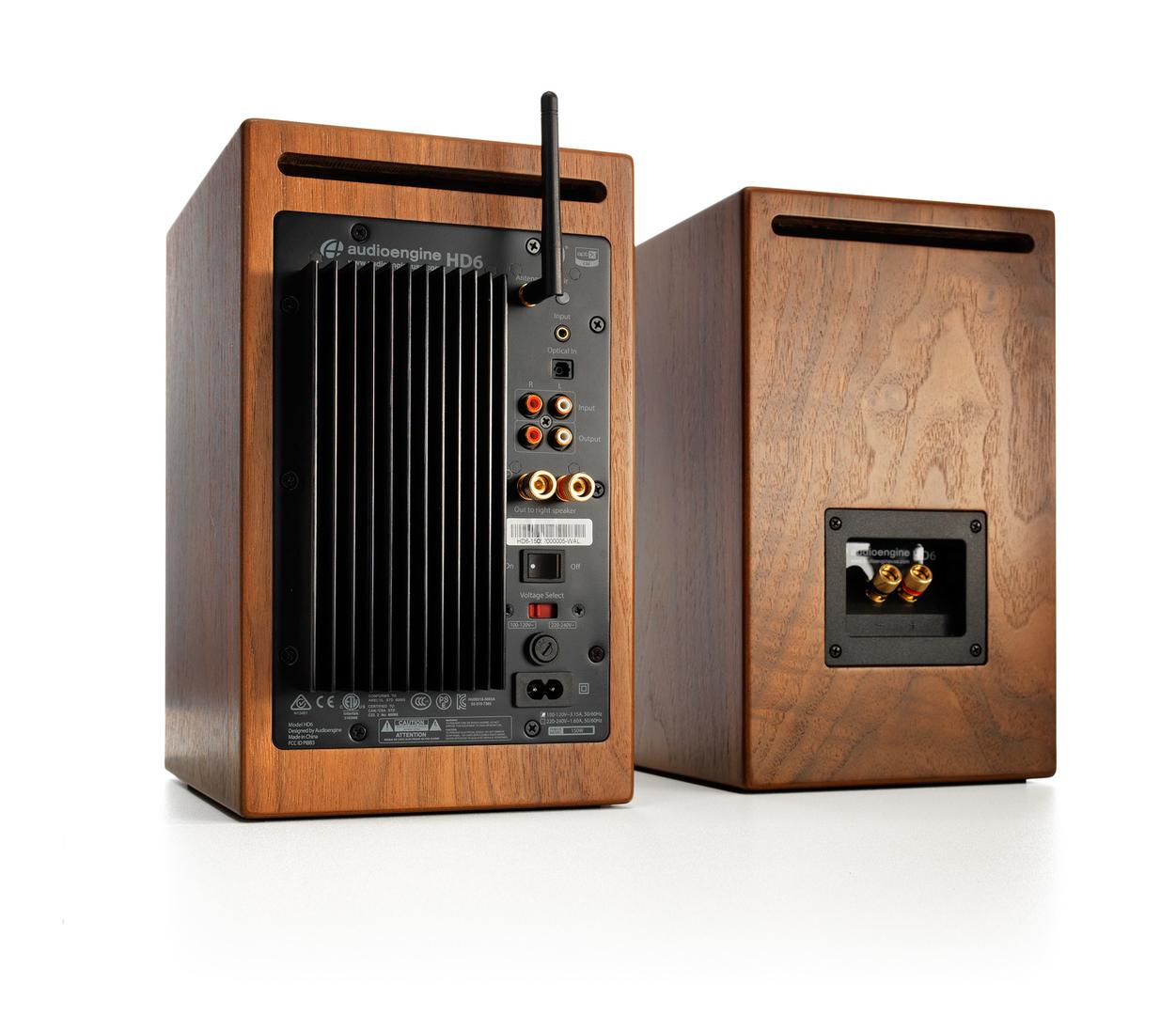 There are a lot of features built into the HD6, but its ultimate success hinges on the loudspeaker’s quality. The HD6 is a two-way compact, roughly a foot tall. The bass-reflex enclosure has a rear-mounted, horizontally slotted port. Each HD6 employs a ferrofluid-cooled silk-dome tweeter with a neodymium magnet. The woofer is a 5.5″ Kevlar/woven-glass/aramid composite with a rubber surround. It’s housed in a cast aluminum frame for rigidity and increased heat dispersion. The cabinets are available in several finishes, including walnut and cherry veneers as well as satin-black paint. Also included are detachable grilles with hidden neodymium magnets.

The right speaker accommodates the brains of the operation—amplifiers, DAC, and Bluetooth, as well as a set of analog inputs and an optical digital input. You’ll know the right channel immediately by its front panel power light and volume control (an all-analog design). The left speaker connects to the internal amplifier in the right channel via an included banana-terminated speaker umbilical. The amplifiers in the HD6 are Class AB analog monoblock designs with an output of 50Wpc RMS, but capable of 75W peaks. The circuit boards for the power and preamp sections are vertically mounted for mechanical shock protection. Audioengine also touts the use of gapless-core toroidal transformers, which have a more tightly radiated magnetic field. Translation: lower noise. AE points out that its toroidals are lighter than standard, lower-cost “EI” transformers and also generate less heat. 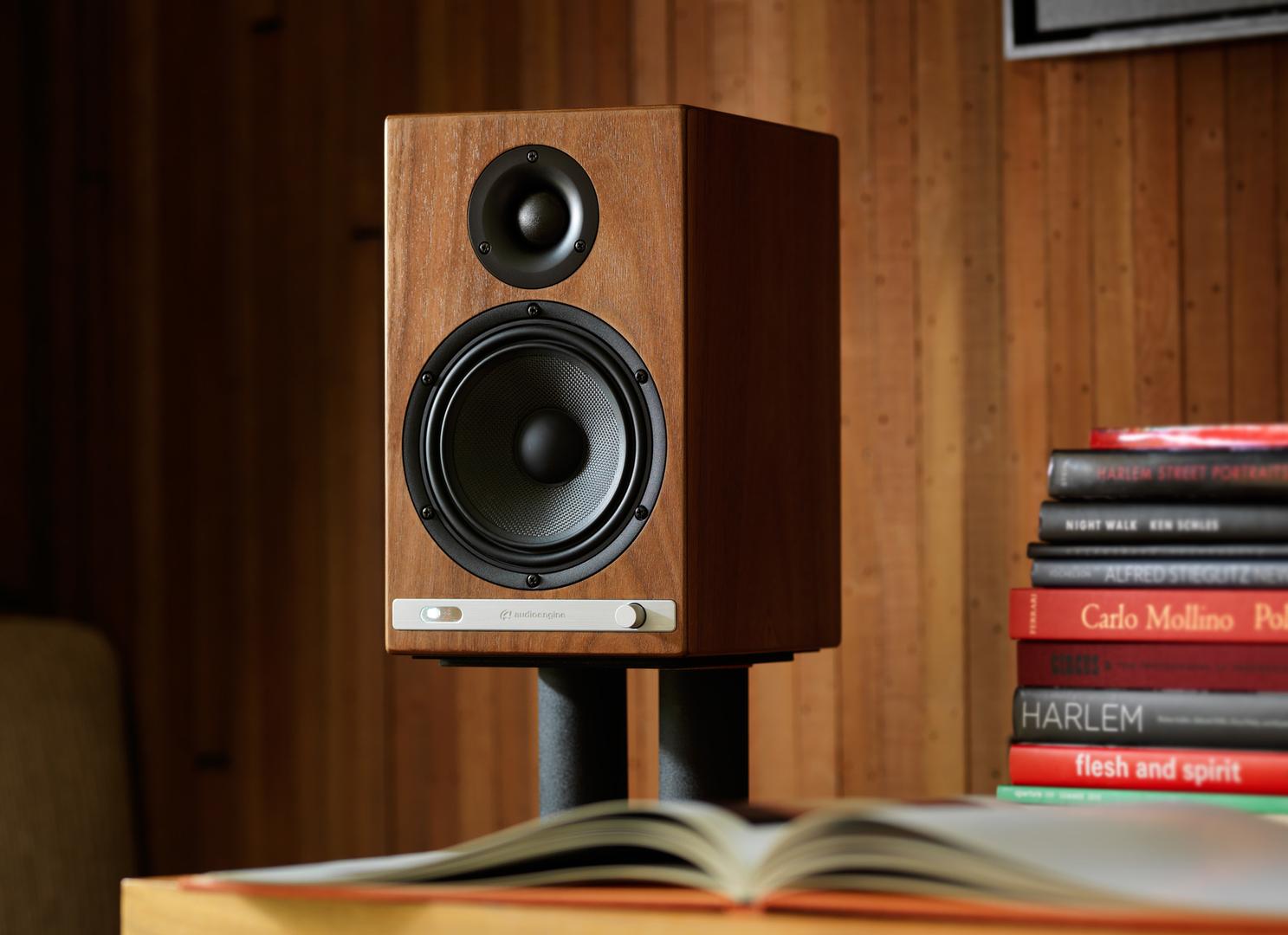 Keep in mind that the HD6 is not a fully active loudspeaker system. The internal crossover is passive in contrast to professional “active” monitors that insert an electronic crossover in front of each discrete amp per transducer—sending only the audio signal required for that specific driver. The HD6 is more like a conventional amplifier/loudspeaker rig, only with all the electronic bits and bobs squeezed into a single speaker. Given the tight internal confines, the HD6 sports an oversize aluminum heatsink on the rear panel of the master speaker to address any potential thermal issues. An amazing piece of packaging sleight-of-hand, if you ask me.

The HD6’s Bluetooth features aptX coding—an advanced audio codec that’s also backwards-compatible with almost any BT device. How extended is its range? Answer: In the real world it all depends on the home, but I found its performance suitable to any medium to large room depending on the home’s construction and floor plan. Both the BT receiver and optical input utilize the AKM AK4396A DAC, widely known for its low-noise and fidelity. The optical input configures the AK4396A as a bit-perfect 24-bit DAC, and can accommodate sample rates up to 192kHz.

Instant Gratification
Setup is devilishly easy, even for someone like me, who invariably cringes at the prospect of “pairing” devices (it’s a childhood issue, like eating lima beans). But the AE team couldn’t have made the task any simpler. With my smart device at the ready, an iPad, I only had to power on the right/master speaker and press the “pair” button. Within seconds I’d identified the HD6 within the Settings/Bluetooth submenu of my iPad’s System window and selected “Audioengine HD6.” I was literally streaming my Oldies playlist in seconds with very good musical results. Bluetooth response was stable with only a few dropouts over the course of the evaluation. When all was said and done, however, I spent most of my listening sessions running the elite Esoteric K-03X SACD player and a Blu-ray player through the analog and optical inputs. The HD6 was positioned on heavy stands, a good two feet or so from back and sidewalls.

I listened to the HD6 in the manner that I imagined many listeners would—a combination of music and movies. It’s well suited to both of these genres but sonically tipped in favor of a cinema balance. By that I mean it makes voices intelligible without getting edgy, and has the weight and dynamics to lend credibility to an action/adventure soundtrack. It also creates a strong center image, crucial to the cinema experience in the absence of a true center channel. It did a marvelous job contributing to the immersive atmosphere of the harrowing mountain climbing documentary Meru. The sensational soundscape of arctic winds buffeting the climbers at twenty thousand feet sent more than a few chills up my spine and added greatly to the thrillingly vertiginous cinematography.

In tonal balance, the HD6 offers a forgiving, ear-coddling midrange—a warmer, slightly darker balance that was effective at conveying big sound from a small box. Bass response was largely very good, if a little overly enthusiastic in the upper midbass. This added oomph in the 80–150Hz range is not uncommon among mini-monitors. Like a loudspeaker equipped with a much larger woofer, the HD6 creates an illusion of bottom-octave extension. Although not perfectly flat in frequency response, its bass has been tailored pleasingly, with commendable control and usable extension into the 50–60Hz range—certainly enough to provide excitement while listening to large-scale music, a feature I noted immediately during the final moments of Vaughan-Williams’ Antartica [Naxos] when the orchestra, playing at full tilt, is suddenly interrupted by pipe organ, emerging like a leviathan from the musical depths. That’s a lot of information, and the HD6 traversed this territory with confidence and clarity. Indeed, it’s a game little speaker, with very good midrange dynamics. Don’t expect it to reproduce the full impact of timpani mallets upon the big drumhead or the complex canvas of cavernous hall reverberations from a pipe organ. Yet, as I discovered, it didn’t shy away from these challenges, either. 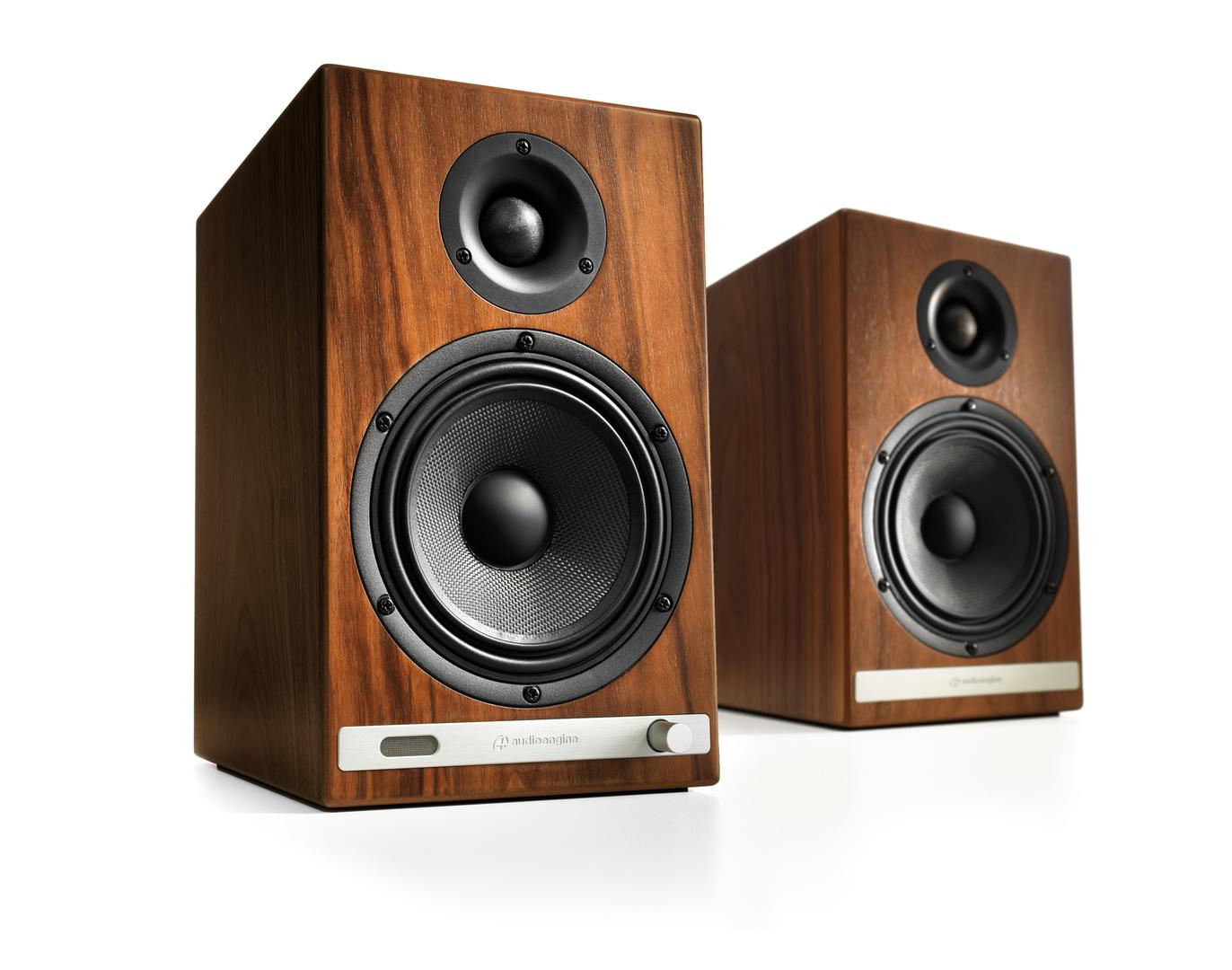 The HD6 exhibits a conservative signature in the treble range. As I listened to Norah Jones’ “Come Away With Me” [Blue Note], I noted that her vocal sibilance was more subdued, and the intensity of brushed cymbals was moderated somewhat. Likewise, during Copland’s Fanfare [Reference Recordings], the lusty brass ensemble was a little less immediate than I’ve noted in the past, but presented with a fair amount of air—overall a little rolled-off but musically convincing, nonetheless. As I listened to the Beatles’ “Hey Jude” on the HD6 I detected a small subtraction of presence and snap in Paul and John’s harmonies and a general ceiling over the soundstage. I then reverted to my own, much pricier ATC SCM20-2SL two-way monitors for comparison. The height component of the crisply struck tambourine returned to the mix, as did the vocal transparency of Paul and John’s vocals [Past Masters, Apple].

Yes, these are the sorts of trade-offs that small loudspeakers confront all the time, but I rate the HD6 sonics far preferable over the long haul than the hyper-detailed and bass-starved mini-monitors that were once the rage years ago, when such “lil’ screamers” were taking the world by storm. Mini-monitors are about making hard choices in tonality and dynamic output. I like and admire the direction AE has taken the HD6.

Is the HD6 for you? First, you might consider how you plan to listen to music—now and in the future. A smart device-only system of today might very well handcuff you down the road. However, the HD6 is intelligently designed to grow with your changing tastes and listening habits. I can tell you from personal experience with my nieces and nephews—millennials all—that the HD6 is quite what the audio doctor ordered in their regard. A genuine performer, it’s attractive, flexible, and user-friendly. Indeed, it’s hard to imagine a “tweener” rig that does more for less than the HD6. Truly the little audio engine that could.