With the arrival of Audio-Technica’s new turntable, its top-of-the-line AT-LP7, I’m back in my comfort zone, happy to have a new record player in my listening room, especially one that looks as nice as the LP7 does.

It may be considered Audio-Technica’s top of the line, but at $799 it’s still well within my entry-level guidelines. There’s a surprising amount of competition right now in the sub-$1000 turntable market, with solid decks from Music Hall, Rega, Pro-Ject, U-Turn, and others. They all more or less have the same basic layout: rigid plinth typically made of MDF or some other non-resonant material, two basic speeds, a non-resonant platter of acrylic or some other type of plastic, and a pre-mounted tonearm with no real ability to easily swap out new tonearms.

That definitely describes the LP7, but it’s not a bad thing. This basic design is more or less universal at this price point for a reason: It’s simple and it’s effective. It allows people who maybe aren’t too into the fiddly-ness that naturally comes with vinyl playback to experience a more advanced turntable. The LP7 even has a built-in phonostage (that can be bypassed) for those who don’t have electronics with a phono preamp. It’s a compromise between form, function, and user ability. The LP7 is a step up from your entry-level turntables, both in cost and in functionality, and I was really interested to find out how it sounded. 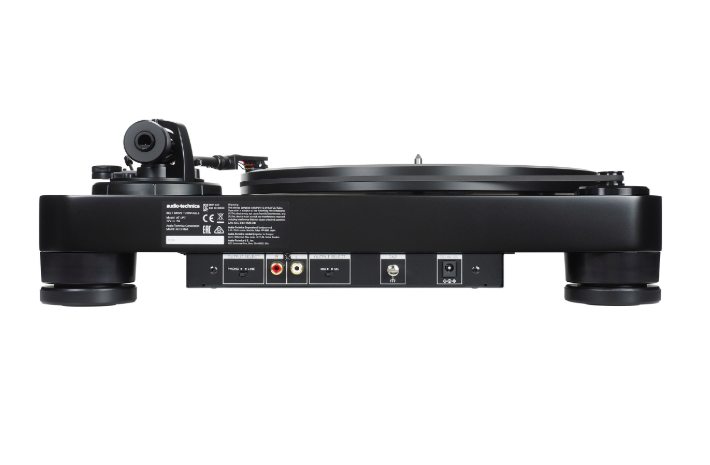 Description
The LP7 has a thick black slab for a plinth with a black platter, round black feet, and a black J-shaped tonearm. The dustcover is even tinted blackish gray. It’s a very attractive-looking unit, very modern, with no faux-wood trim. I love that it comes with a lift-off dustcover, which is the best kind; it fits beautifully and is also nice and light. The feet are a little springy, which I think will help with vibration, the bane of any serious deck. Plus, the feet are easily adjusted for perfect leveling.

The LP7 is a fully manual, belt-driven ’table—no auto-lift and shutoff at the end and no fine-tuning of speed, though conveniently there is an electronic switch for 33 or 45rpm. Using a strobe with my Android phone running the RPM Calculator app, I found that the LP7 maintained speed pretty well; it was just a touch fast.

The LP7 is fitted with the VM520EB cartridge that retails for $119 and is one of A-T’s more affordable models. It’s factory mounted, so you won’t have to deal with tiny screws, which is always nice. The tonearm also has a standard headshell mount for easy cartridge swapping, which I love, along with an adjustable tracking-force knob, anti-skate control, and the ability to change ’arm height.

Setup
Getting a new turntable up and running can be one of the more frustrating experiences any new audiophile will go through. In my opinion, the best entry-level turntables are not only going to have solid performance; they’re also going to be essentially plug-and-play, at least as far as any turntable can be. You don’t want to scare off any budding audiophiles, after all.

The LP7 doesn’t disappoint in these regards. Once it was out of its packing materials, I installed the platter, leveled the unit using its adjustable feet, attached the belt, screwed in the headshell, slid on the counterweight, set the tracking force, and was listening to music in fifteen minutes. I tried my best to use only what Audio-Technica supplied with the deck, and found that I missed only two things: a tracking-force gauge and a bubble level. Fortunately, I have both, but some beginners might not. I recommend grabbing these two items if you plan on being in the audiophile game for a while; they’ll come in handy, trust me.

I plugged in the supplied RCA cables with attached grounding wire and decided to test out the built-in phono section first. When I got everything running, the initial sound was…horrible. It took me a second to realize that the switch on the back marked “Phono” and “Line” refers to the way you’re plugging in the cables. So if you’re plugging into an amp’s phono section or into a phono preamp, use the “Phono” set. If you want to use the built-in phono preamp, use the “Line” set. I felt like that was a little confusing, but not a huge deal.

By the way, in case you still need extra guidance, A-T set up a nice little video on YouTube that walks you through all the steps. Worth watching if this is your first time. Overall, high marks here for ease of setup.

Listening
I started with Sky Blue Sky by Wilco, one of my favorite albums. The track “Impossible Germany” is a smooth progressive jam with nice alternating depth of sound. Right away, I was struck by the timing and rhythm of the LP7. It felt quick and engaging, maybe on the fast end of exciting, but it kept me involved. The only negative I sensed was a nagging bit of inner groove distortion. I double-checked everything, made sure the ’table was level, messed with the tracking force, messed with the anti-skate, but in the end I could only minimize the distortion slightly. It’s not horrible, but it’s definitely there during more difficult passages closest to the record’s label.

After my initial session, I used the built-in phono preamp while listening to that same Wilco album, and it worked fine. That’s about as much as I can say about it, to be honest. Compared to my Schiit Audio Mani ($129), it sounded dull and lifeless. The low end was nicely textured, but the midrange and the upper felt almost veiled and uninteresting. I gave it a shot for a few days more, but overall, the built-in phono section didn’t blow me away. It’s serviceable and it’ll sound better than the real cheap phono preamps out there, but I’d consider upgrading pretty quickly.

Up next, I switched back to my Schiit Mani and listened to Steve Reich’s album Pulse/Quartet. The first side, the composition called “Pulse,” is a group of violins and violas playing around a central theme over an electric bass and piano. The steady beat of electric bass underpins the piece throughout, though meandering at times, helping to ground the violins and the violas. I felt like the LP7 did a good job of keeping the low-end steady, probably an offshoot of its pleasant timing and dynamics. The violins could acquire a touch of grain on their highest sustained notes, although the midrange came through as genial and smooth.

I won’t say backgrounds were perfectly dark, but dark enough that attacks were sharp, and decays lingered only where they were supposed to. Especially on the flip side of the Reich album, “Quartet,” where there are just a vibraphone and piano bounding back and forth. These are two instruments that really rely on sharp, differentiated reproduction with solid heft and dynamics. The LP7 did a good job at keeping notes and chords separate, especially in the intricate opening section where the struck strings and slammed metal vibrated in tandem, playing off each other, slipping back and forth. It’s a tricky piece of music for how simple it seems on the surface, and although I think the LP7 definitely struggled again with some distortion issues related to tracking later in the side, I was impressed overall.

Finally, I finished with Tim Hecker’s album Haunt Me, Haunt Me, Do It Again, recently reissued on vinyl. The opening sounds of “Music for Tundra” are glitchy and drone-like, interspersed with nearly melodic crunching. The LP7 did the piece justice, managing to balance the strange and disjointed timing of the glitched-out soundscape with the echoing grind that keeps the songs from disintegrating into aimless sound.

Everything on Haunt Me feels broken in a purposeful way. It’s intricate and difficult, and the LP7 never felt like it wasn’t serving the music. Each new stuttering section was taut and controlled despite sounding completely haywire. Bass isn’t a focus in Haunt Me, but the lower end was still tamed and rounded out, leveling the otherwise chaotic miasma churning above it. There was a really nice dynamism in the way tracks echoed, faded, and spread out into each other, pulsing new ideas. I felt really pleased with how the LP7 kept me entirely engaged, start to finish, side after side.

Conclusion
The LP7 checked off all the major boxes for me when it comes to an entry-level ’table. It was easy to set up, it’s definitely attractive, and its performance exceeded my expectations. I particularly enjoyed the timing and rhythm the LP7 brought to every record I threw at it, and I only noticed any inner-groove-distortion issues on the trickiest of albums. The built-in phono preamp Audio-Technica includes is fine, although it’s the first thing I’d think about upgrading, followed by a new cartridge and some decent cables. While the LP7 is on the upper end of entry-level—and there’s a lot of competition in that range these days—it’s a really good place to start. It has a solid feature set and the consistent performance I expect for the price. If you’re in the market for a belt-driven turntable, I’d give the Audio-Technica AT-LP7 serious thought.