The phrase “Swiss Army Knife of audio products” gets bandied about a lot in the high end, but the Audio Research GSi75 truly is it. ARC modestly describes the tube-based GSi75 in its user manual as an integrated amplifier. Well, yes. But talking about burying the lead, as they say in journalism.

After popping the GSi75 out of its box, I quickly discovered that there is a lot more to it than 75 watts per channel. The GSi75 has a wealth of controls and options packed into its relatively modest-sized chassis. It contains both a DAC and phonostage. Each is of high quality. The DAC provides you with upsampling options, or you can just stick with the native sampling rate of 44.1kHz. I found I liked sticking with the basic sampling rate best. Will it sound different at other rates? Yes. But better? I’m not so sure.

Then there is the nifty phonostage section. It offers the option to alter the input impedance on the fly with five different loads—100, 200, 500, 1k, and 47k ohms. If you like to fiddle with—or to put it more politely, tailor—the sound, then you can play with this unit to your heart’s content. It’s also important to note that this product, to my surprise, offers single-ended inputs only. No big deal. Some designers will tell you they continue to prefer single-ended, while others swear by balanced. Most ARC gear these days seems to fall into the latter camp. ARC also offers the option to employ the SE3 input of the GSi75 as a standard volume-controlled input or as a “unity gain” input. This permits the user to combine the GSi75 with a multichannel surround-sound processor. 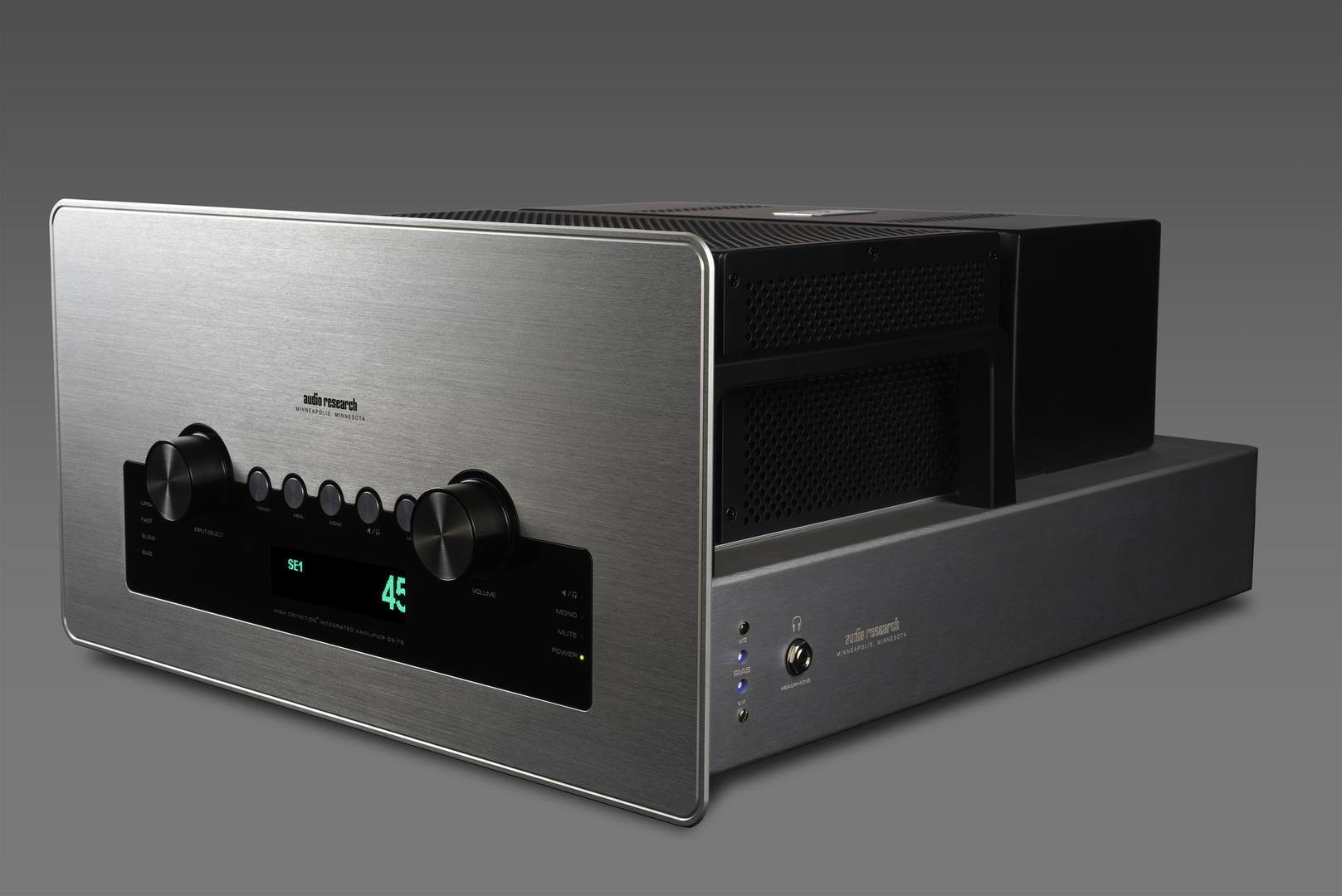 But these aspects are, of course, only part of the story. The other half is that all the gee-whiz features of the ARC are allied to a bunch of KT150 output tubes coupled with the Russian high-transconductance 6H30 tube on the input. Audio Research likes to drive its gear hard, and the 6H30 allows it to do that. The KT150 is a tube that’s come on strong in the past few years, displacing the venerable KT88 and the not-so-venerable 6550. The advantage of the KT150 is simple: It can take a lot higher plate voltage and you can get more watts out of it. Fewer tubes equals simpler circuitry, always a good thing in the high end. ARC supplies a plastic tool to adjust bias to 65mA via volume pots on the side of the amplifier. Negative feedback is pre-set at a judicious 4dB.

So what does the GSi75 actually sound like? Not what I expected. My memories, admittedly from years ago, of the ARC Ref II Mk. 1 were of a very full-bodied and bloomy sound. I know that ARC has moved somewhat toward a more neutral presentation and that it’s sometimes accused of having a whitish sound. Still, I wasn’t prepared for the crystalline clarity, coupled with pretty much zero tube rush, that emanated from the GSi75. This is one of—maybe the—quietest piece of tube gear that I’ve heard in recent years. Maybe it’s a function of no interconnect from preamp to amplifier, but something dandy is going on with the GSi75. If you’re one of those people who turns up his nose at integrated units, then the purity of the ARC might help change your mind.

Unlike the Jadis DA88S that I reviewed for TAS last year, the ARC doesn’t command your attention with whiplash dynamics or tremendous bloom. Instead, it stages more of a disappearing act. It’s always firmly in control and may have a little less perceived power than the blissful Jadis. But I wager that it’s more neutral. Top to bottom it sounded of a piece, with nothing in the frequency spectrum protruding.

Initially, I was somewhat stumped by the sound of GSi75, which I found a little antiseptic. After an hour of warm-up, which I have come to think is especially essential for the GSi75, it relaxed and conveyed with precision one of my recent CD acquisitions, Bach’s violin concertos played by Alina Ibragimova on the Hyperion label. For whatever reason, I’ve often found that recordings of the orchestra on Bach’s violin concertos can sound turgid, recessed, or confused. While the Hyperion recording is not perfect in these regards, there can be no doubting that Ibragimova plays with real verve and originality, qualities that came through beautifully with the GSi75. I was especially struck by the unit’s ability, on cut after cut, to unravel with impressive fidelity the sinuous and intricate orchestral lines. Not once did I have the impression that it was treading into steely sonic territory, sacrificing tonal richness for accuracy.

Something similar can be said about the GSi75’s rendition of another of my favorite CDs. On a recent Harmonia Mundi recording, the marvelously talented cellist Jean-Paul Queyras, whom I listened to when he used to play at my grandmother’s home in Freiburg, Germany, when we were both teenagers, performs Haydn’s cello concertos with the Freiburg Baroque orchestra. This ensemble has won renown for dedicating itself to baroque performance practice, but adding a good deal of verve to the proceedings. Put bluntly, Queyras’ performance is, to borrow from Donald Trump, high energy. Once again, the GSi75 conveyed with great gusto the hair-raising presentation. At one point, Queyras, in the heat of the moment, whacks his cello with his bow—a nonmusical event, to be sure, but I have to tell you that I was shocked by how much of the hall space the ARC captured. You could really hear that whack resounding in the recording venue. This was, in its own way, a tribute to the ability of the GSi75’s tubes to open up the soundstage so that very small details are never lost or obscured. Instead, the imaging of the GSi75 is spot-on. Queyras’ cello was in perfect proportion to the orchestra, and I could hear all the way into the back of the hall.

As enjoyable as digital was, I remain first and foremost a vinyl aficionado, partly because it sounds so darned good, partly because it reminds me of my childhood spinning black gold. It’s comforting to know that not everything from the good old days has gone by the wayside; indeed, vinyl is making a comeback. So onto the Continuum Caliburn I plopped that wonderful disc, The Persuasions’ We Came to Play, as soulful an album as ever was recorded. Admittedly, this album may not be for everyone; my buddy and fellow reviewer Anthony Cordesman sat in stony silence when I played it a few weeks ago. Nevertheless, this gem, which A.J. Conti of Basis brought to my attention several years ago at his factory in New Hampshire, is one of my reference discs. On the cut “Gypsy Woman,” I reveled in the superb imaging, the pellucidity of the voices, and above all, the ability of the GSi75 to faithfully reproduce Jimmy Hayes’ bass. The intonation was about as good it gets, and the GSi75 communicated the emotional excitement of the lyrics as they reach an impassioned crescendo. There was no blurring, no smearing, no overlapping of voices with the GSi75.

Another album that I’ve been deploying with some regularity is Shelby Lynne’s Just a Little Lovin’—the 45rpm version, I should add, recently released by Chad Kassem’s Acoustic Sounds. The sound is pretty much impeccable—tremendous presence. What more is there to ask for? The GSi75 locked onto the ensemble and never let go. Cymbals came across with just the right amount of metallic sheen and the guitar accompaniment was perfectly delineated. No, it wasn’t the kind of jet-black background you get with solid-state gear. But the flipside is that you get that glorious 3-D imaging that only tubes seem able to provide.

No, the sound was not as big and voluptuous and powerful as with my reference Ypsilon gear. But that shouldn’t come as a surprise either. The GSi75 isn’t meant to go against the heavyweights. For that you would go to ARC’s reference gear. This is a stripped-down, lithe, nimble performer that delivers the goods. Whether you hanker for a little more bloom or pulchritude is a question that you can only answer by demo’ing the GSi75. On the yin-yang continuum, as HP used to say, this definitely lands on the cooler side. This is emphatically not an old-school piece of tube gear.

But when you hear how quiet the backgrounds are with the GSi75 and its commendable fidelity, it’s hard not to be smitten by this superbly engineered new piece from ARC. Coupled with a loudspeaker that’s relatively easy to drive—I used the 4-ohm taps with the Wilson XLF loudspeakers—I never found it wanting. With the GSi75, ARC has produced an integrated amplifier that is more than worthy of its illustrious heritage.