To confess, I developed a soft spot for the Russian 6C33C-B power triode after I first heard it perform in a Balanced Audio Technology (BAT) amplifier many years ago. Even under CES show conditions, while driving Avantgarde Acoustics loudspeakers, the BAT’s warm and spacious acoustic etched itself indelibly in my auditory memory bank. This tube has been championed by Russian-born designers such as BAT’s Victor Khomenko and Lamm Audio’s Vladimir Lamm, but it was totally unknown in the West prior to the defection in 1976 of Soviet pilot Viktor Belenko. Flying a MIG 25 “Foxbat” jet fighter at low altitude to avoid radar detection, Belenko managed to touch down in Japan. When Japanese and American intelligence agencies disassembled the plane, one of the surprises discovered was this 6C33C tube in the MIG 25’s communication power supply.

The 6C33C was designed as a power supply series regulator tube, and as such is intended to be operated at fairly low plate voltage and high current; a typical operating point might be 200mA at a plate voltage of 150V. Its low plate resistance makes it possible to use a much lower turns-ratio output transformer, thus enabling greater bandwidth extension. It’s a massive tube featuring a super-thick glass envelope and consisting internally of two triode sections connected in parallel. It takes at least five minutes for it to stabilize its operating temperature. Thermal runaway is a possibility with this tube, and this should be addressed in the amplifier design.

Audio Mirror’s Vladimir Bazelkov is no stranger to the 6C33C-B triode having started his electronics career in Bulgaria some 25 years ago. Based in the U.S. since October 2000, he has continued to refine his designs—to wit, the 45-watt amplifier under review sounds big and powerful and expands the reach of SET designs to even moderately sensitive 88-to-90dB loudspeakers. I’ve always been skeptical (and you should be as well) of manufacturer claims of 8-watt-amplifier compatibility with sub-90dB loudspeakers. Such a pairing may be played reasonably loud but lacks sufficient dynamic headroom to generate convincing scaling of dynamic peaks. No problems here for the Audio Mirror SET monoblock, though it really shines with higher sensitivity (94dB or greater) loudspeakers. Reproduction of dynamic peaks, in particular the ascent from loud to very loud, is most impressive, exceeding in this regard the performance of all other SET amplifiers I’ve auditioned to date. 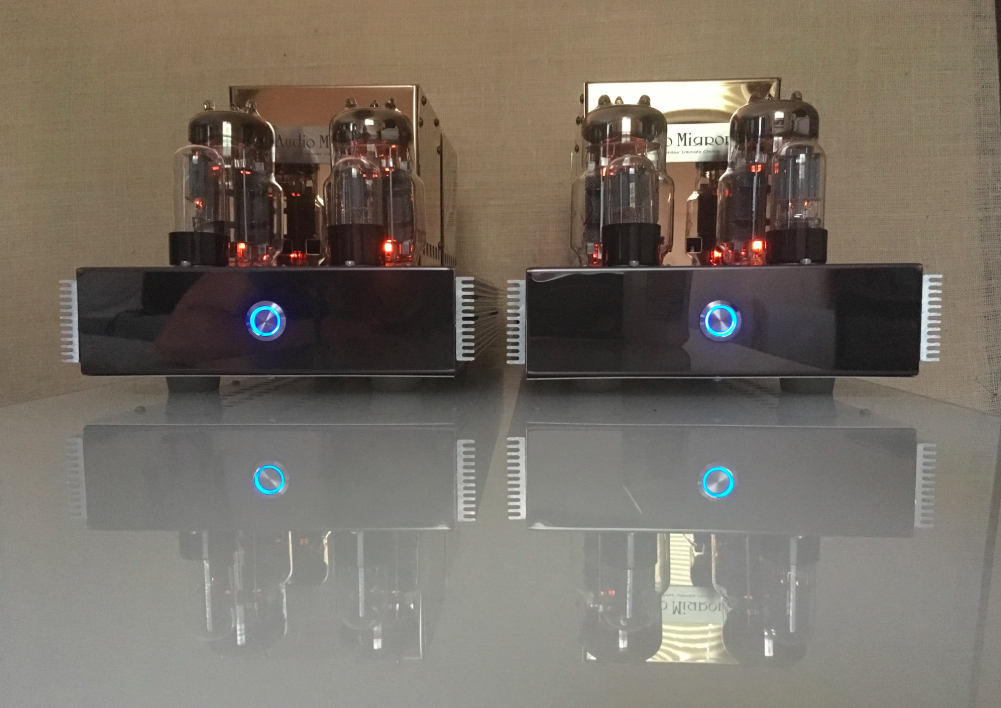 A key design factor is the use of a parallel pair of output tubes, thereby significantly extending power delivery, especially into difficult loads. Vladimir experimented with a variety of biasing schemes, including grid bias, resistive cathode bias, and a mixture of both cathode and grid bias. None of these approaches was able to generate the combination of musicality and dynamics he desired. He finally settled on a nifty MOSFET-based current sink for cathode bias, capable of sufficient headroom to accommodate powerful dynamic peaks. What I find most appealing and refreshing about all this is that Vladimir put his ears into the design process at each critical juncture rather than relying strictly on measurements or standard practice.

The front end consists of two series-regulated push-pull (SRPP) stages. The first stage, a 6SL7 dual triode is used as a voltage gain stage and is direct-coupled to a 6SN7 drive stage. My review sample was outfitted with inexpensive Russian equivalents, 6H9C/6SL7 and 6H8C/6SN7. Vladimir encourages experimentation with regard to these tubes. He related that, in his experience, the Sylvania VT229 is a much better choice than the Russian stock 6H9C, and that the Chinese CV181 from Treasures HS is superior to the Russian stock 6H8C. Of course, I didn’t need much encouragement to start tube-rolling. I spent a fair amount of time experimenting with preamp tube substitutions and came to realize that the choice of a 6SL7 type makes for a significant impact on overall sound quality. The stock 6H9C gave rise to rather defocused image outlines, while an RCA 6SL7, known for its warm tonality, proved a bit too much of a good thing in this context. Ironically, I eventually settled on the Russian Melz 6H9C for its excellent spatial focus and clarity, and on the Sylvania chrome-top 6SN7. Very little global feedback is used. After many experiments with no-feedback amps, Vladimir has become a firm believer that some feedback is needed to firm up the bass.

Extensive protection circuitry is built in. First, there’s about a one-minute delay in the application of high voltage after powering on the amp, to allow time for the filaments to warm up. The circuitry registers several fault conditions and shuts off the amp after sensing thermal runaway, arcing, excessive bias, and severe overdrive. When protection is engaged, one or two of the LEDs (one by each power tube) glows red to show which tube is the “bad actor.” The LED stays lit until the amp is powered off. The protection circuit is automatically reset once the amp is powered on again. You will note two small toggle switches located between the transformers. The one closest to the speaker terminals controls the high-voltage supply, and is intended to be used for breaking in new power tubes. Flipping this switch to the off position (toward the inside) allows the tubes to burn in just on the filament supply. After about 12 to 15 hours, the switch may be turned to the on position, and you’re good to go. The other switch, closest to the RCA input jacks is a ground lift. When this switch points outward, chassis ground is connected. Ground may be lifted in the case of ground loops by flipping the switch toward the inside.

In the context of SET amplification, the power tube is the 800-pound gorilla in the room. Its distortion spectrum pretty much dictates the sonic character of the amplifier. Let me make this perfectly clear: The 6C33C-B is no 300B. I say this without malice or prejudice. While I like the sound of both tubes, they offer distinctly different takes on musical textures. The 300B is refined and elegant sounding, while the 6C33C-B is texturally warm and tonally robust. And this suits me just fine since my first sonic priority revolves around tonal balance. My worst nightmare would be a thin and bright presentation. I generally insist on sufficient lower midrange authority to do the power range of the orchestra justice. The Audio Mirror did not disappoint in this regard. It firmly belongs to the “Tony Soprano” style of tube amplification, possessing the tonal gravitas necessary to realistically flesh out cello and upright bass. That sort of big tone is probably in part due to the inherent personality of the front-end octal tubes. This is no place for 9-pin miniatures. Oh, I should hasten to add that the 6C33C-B requires a substantial warm-up period to sound its best. These massive tubes seem to need on the order of 20 to 30 minutes to totally smooth out.

This amp didn’t sound much like a typical SET amplifier. For starters, the bass range is extended and well defined, quite a pleasant surprise. It helped that the Basszilla DIY loudspeaker pairing turned out to be a match made in heaven. In this context, the Audio Mirror sounded big and powerful, conveying a sense of ease during dynamic peaks uncommon for a typical SET. The treble range was spacious and adequately detailed to allow ride cymbal strikes to cut through the mix of a jazz quartet. Harmonic textures were pretty much in the Goldilocks zone, neither overly liquid nor threadbare, indicating a reasonably wide treble bandwidth. This is not an analytic-sounding amplifier; so don’t expect it to compensate for a fuzzy front end or preamplifier. Texturally thick tube preamps may well obscure low-level detail, so plan on coupling the Audio Mirror with a high-res preamp in order to plumb the depths of a particular recording.

Space is the final frontier when it comes to two-channel audio, so if imaging is a priority for you then you’ll definitely need to explore SET amplification. I haven’t found a push-pull amplifier that can compete in this arena against a well-designed SET. I was delighted to discover that the Audio Mirror was capable of generating a monster of a soundstage, a three-dimensional illusion with fully fleshed-out depth and width perspectives, and it did this as well as any other amp I’ve auditioned to date regardless of cost. The effect was to provide a palpable connection to the recording venue, so that with my eyes closed I could easily imagine being there.

I found myself frequently immersed in long listening sessions and came to realize that the Audio Mirror is conducive to binge listening. There’s a simple explanation for that. It delivers music’s verve with a touch of warmth and tonal gravitas that pushes all the right buttons for me. The Audio Mirror expands the reach of SET amplification to medium-sensitivity loudspeakers, and that’s a big deal for most audiophiles. It makes one helluva musical statement and would have earned an enthusiastic recommendation even with a $10k price tag. At its asking price, it represents a remarkable value and a must-audition amp.