The competition among today’s premium integrated amplifiers has all the drama and intensity of a season of Game of Thrones, with the exception of the blood spatters. This popular segment of components has the top electronics companies seeking dominion over your listening room, frequently at premium prices (and beyond). However, that’s not the way of Arcam. For decades the British brand has represented sonic sophistication fit for nobility at commoner prices. Like rival NAD, Arcam tends toward modesty, flying a little under the high-end radar. Historically, it has eschewed trendier bells and whistles for the cleaner design and shorter signal paths that lead to a purer, more authentically musical presentation. Its latest, the A49, represents the brand’s top-tier integrated from its FMJ Series. (For the record, FMJ stands for “Faithful, Musical, Joy” and not the title to the 1987 Stanley Kubrick film.)

A full-featured, high-powered integrated, the A49 represents the zenith of Arcam’s engineering efforts in this segment. Its basic DNA and general topographical features and circuitry are shared by its matching cousins, the C49 preamp and P49 power amp—the latter being a perfect partner should an A49 owner consider bi-amping down the road.

The A49’s calling card is power and lots of it. It outputs a hefty 200Wpc into 8 ohms (400Wpc into 4 ohms) and, significantly, fifty of those watts in pure Class A mode. This is all thanks to Arcam’s latest-generation Class G topology. Class G? Simply stated, Class G is a version of Class AB that, in the pursuit of higher efficiency, “uses multiple power supply rails of various voltages and automatically switches between these supply rails as the input signal changes.” Arcam gives this example: Under low-demand conditions, the system utilizes a lower rail voltage than a comparably rated Class AB amplifier, significantly reducing power consumption. When more power is demanded, extra transistors come into play as the system switches to the high voltage rail. This technique reduces the average power consumption, and loss caused by wasted heat.

The A49 preamp section features a four-layer fiberglass PCB, with separate ground and power planes for optimum layout of signal traces. All resistors in the main signal path are 0.1% thin-film, surface-mount parts. This ensures accurate channel matching and stable resistor values. The preamp’s power supplies rely on a dedicated toroidal transformer, entirely separate from the massive 1.5kVA one used for the power amplifier. The transformer feeds ten separate regulated supplies for the preamplifier and its control switches. Surface-mount components are used extensively. In addition, the low-level audio signals are handled in balanced mode throughout the preamplifier; the balanced circuit’s common-mode rejection isolates the preamp’s circuitry from the high-current swings of the power amplifiers and their supplies. The A49 employs an electronic dual-mono volume control with ladders of resistors to eliminate the imbalances and long-term wear of rotary pots. 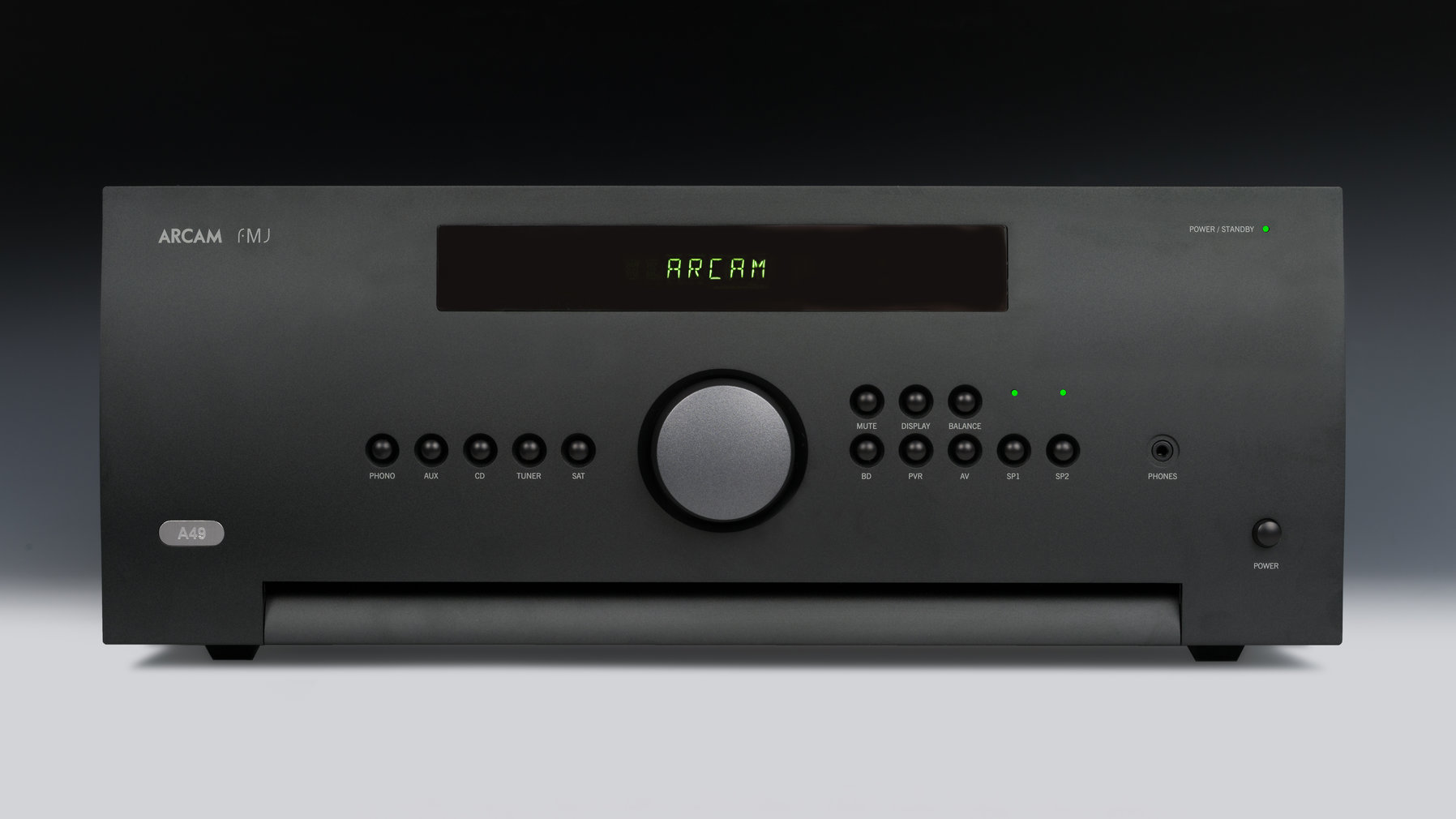 The A49’s front panel is spacious—eye-catching in the vertical arc that softens its imposing height. Controls are centralized around the hefty volume knob and horizontal display. They include input selection buttons on the left and additional inputs, mute, balance, and speaker indicators to the right. A 3.5mm headphone mini-jack completes the array. Arcam notes that the front-panel display and general operating features, including overload protection, are under the control of a microprocessor housed at one end of the preamp PCB. It is fed from the +5V standby power supply and isolated from the analog sections.

The back panel is equally roomy with seven RCA inputs, a pair of balanced XLR inputs and XLR pre-outs, a trigger output, and dual sets of speaker terminals. Happily, the A49 is also equipped with a 47k-ohm phono input designed to accommodate standard moving-magnet cartridges. By now, Arcam should be hip to the fact that many of today’s interconnects use fairly thick terminal jackets. So, with all that available room on the back panel, how about a little more spacing between each right and left input, lads? A full-function remote control is included, as well.

Unlike some of its rivals, the A49 doesn’t offer an internal USB/DAC, optional or otherwise. However, the back panel is equipped with an on-board power supply to power Arcam’s 6V and 12V rSeries products, which include wireless and standard DACs. Not a bad idea either—offering the capability of adding a standalone DAC at the owner’s discretion, and keeping potential noise-inducing digital circuitry outside the A49 chassis.

The A49 embodies the big amp sound that cruises through large orchestral music with a swagger and authority that only come with deep power reserves—the kind of reserves that physicalize the heavies of wind and brass and fill a room with the trailing resonances of acoustic bass and kettledrum. The A49 wasn’t finicky about the speakers it was driving, either. I had on hand my own ATCs plus the new DALI Rubicon 6 (review to come) and the Kharma Elegance S7-S, one of the most transparent speakers I’ve heard, and one accustomed to sterling amplification (see Rowland and S-7S reviews in this issue). In each case, the A49 produced a smooth, detailed sound with a hint of lower octave warmth and air. Although a little drier in the treble than is my personal preference, it nonetheless preserved much of the air and vocal delicacy of Alison Krauss’ gentle, soothing performance of “Slumber My Darling.”

The A49 can generate a big rocking sound, too, with a heavy dynamic energy that conveys the weight and ambient immersiveness of Dire Straits’ “Telegraph Road,” and the hammering rhythms and ebullience of a live track like Jackson Browne’s “Running On Empty”—a cut wherein, even after all these years, I still look forward to Russ Kunkel’s double-barreled shotgun drum fills as the song hard-brakes to a finish. During Marc Cohn’s rollicking cover of Willie Dixon’s “29 Ways,” with Jerry Marotta’s percussion work leading the charge, the A49 kept toe-tapping rhythmic pace with the best of them.

During The Wasps Overture the A49 reproduces a credible soundstage, not overly expansive laterally, but nicely layered with good preservation of image placement, low-level nuance, and decay all the way from the first violin section downstage to the most delicate triangle upstage. The A49’s reproduction of inner detail was equally good; its ability to hone in on and finely focus low-level vocal cues was duly noted during Jackson Browne’s “Colors Of The Sun.” The clarity with which I could discern Don Henley’s slightly raspy delivery in his back-up harmonies was a tribute to the unit’s sensitivity and lack of background noise.

The A49 revels in reproducing depth and dimensionality. A favorite example is the “roots” chamber trio of Yo Yo Ma, Mark O’Connor, and Edgar Meyer from Appalachian Journey. The amp produced a sense of dimension and image focus that was remarkable for a track that has often sounded smeared and even a bit scrambled through lesser amplification. But the A49 was A-OK, reproducing the sense of depth and individuation so precisely you could take a tape measure to the holographic impression it created.

The A49 slips only slightly in direct comparison to integrated high-fliers like the MBL C51 or the Rowland Continuum S2, both of whom weigh in at roughly double its price. Parenthetically, when I think of the impression that top-rung integrated amplifiers create, I’m reminded of the Tom Petty hit “I Won’t Back Down.” These amps are relentless in their pursuit of tone-color density and dynamics. In this royal company, I felt the A49 was not quite as potent in the lower octaves and could’ve used a shred more control and transparency during the opening to Holly Cole’s “I Can See Clearly.” Also, as I listened to Carole King’s “Home Again,” there was the smallest hint of softer focus. Also, the treble range of solo piano, while very good, had a slightly whitish character that softly veiled the instrument’s upper-octave harmonics.

Not to be forgotten is the sonic noteworthiness of the headphone amp, which uses its own independent amplifier. Arcam hasn’t short-sheeted this ever-more-popular segment a whit. The headphone amp has a very low output impedance (less than 1 ohm) and enough voltage (>4V RMS) to drive even notoriously fussy over-the-ear numbers to a decent level. I spent some time listening through my AKG K501 and Cardas EM5813 and discerned keenly detailed images, an unhyped warmish midrange, and naturalistic transients. The A49 drove these cranky ’phones quite effortlessly—not an easy assignment with the 120-ohm, 94dB-sensitive AKGs.

The Arcam A49 is one rock-solid, fully featured performer, able to do the heavy lifting and satisfyingly drive almost any loudspeaker (including the portable variety), and to perform with a level of musicality that’s certain to please. A classy product from a company that knows that class in and of itself is not strictly reserved for the elite. Highly recommended.