Like many audiophiles, my earliest musical memories involve turntables, from a kiddie player (possibly Fischer-Price), to the AudioTechnica my father (who was a Linn Sondek LP12 guy at the time) gave me for my tenth birthday, to coveting the classic Technics SL-1200 (preferably a pair with which to play DJ) in my teens.

Eventually, my role at TAS granted me the wonderful opportunity of hearing countless ’tables at shows and in colleagues’ homes, in addition to auditioning some chez moi. The latest and greatest I’ve spent time with thus far is the one under review, the Acoustic Signature Challenger Mk3.

If the Acoustic Signature name doesn’t ring a bell, it should. You might recall the German manufacturer’s ne plus ultra flagship Invictus turntable taking TAS’ 2016 Overall Product of the Year honors, not to mention JV’s glowing review of it in Issue 264 (and of the newly updated and improved version in this issue). Guided by the engineering prowess, watchful eye, and passionate presence of founder/CEO Gunther Frohnhöfer, the company has grown steadily in both sales and international reputation over the last decade. Indeed, Acoustic Signature has outgrown its office and factory space and will be moving soon into larger facilities not far from its former digs. (See sidebar for more about the Acoustic Signature factory.)

Though the cylindrical Challenger Mk3 may not have all the low-end weight and power of Frohnhöfer’s top-tier designs, it nevertheless delivers remarkable purity, focus, elegance of presentation, and musicality. Its deceptively simple look belies its ingenious Teutonic engineering. Indeed, Frohnhöfer is continually seeking ways to improve sound through clever design ideas. For instance, I recently had the good fortune to be on-hand when Gunther himself, along with his trusty colleague Maurice, a young engineer, performed upgrades to JV’s mighty Invictus reference turntable and TA-9000 tonearm. The sonic improvement was easy to hear. (It’s worth noting that this level of service wasn’t only for JV—Gunther and Maurice are personally upgrading each and every Invictus for owners.) 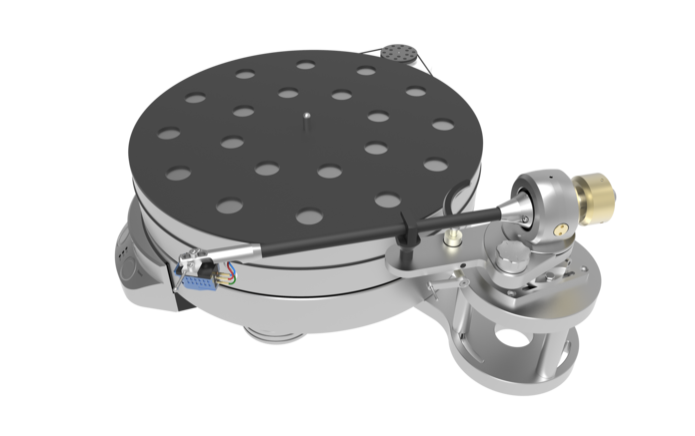 Stellar service aside, we’re here to talk about a truly “real world” turntable with a powerful presence of its own. Although the Challenger Mk3 resides in the middle of the Acoustic Signature ’table lineup, in its quality of materials and manufacture, feature set, and price—not to mention playback sonics—it’s far from middling. The Challenger model was first introduced in 2004 and is still one of the company’s bestsellers. It was originally conceived as Acoustic Signature’s smallest turntable of significant mass—that is, the statement-level entry point where Acoustic Signature’s thicker, denser platter was first offered. The Mk2 version featured an updated tonearm base and upgraded motor-controller electronics. Among other improvements detailed below, the current Mk3 boasts a European-made synchronous motor with a new Beta DIG digital motor controller for greater speed stability, and therefore better sound quality. This third iteration also offers more flexibility: It can accommodate up to three motors and three tonearms simultaneously. Considering the Challenger’s small size this is remarkable versatility.

As with all Acoustic Signature turntables (and tonearms), the manufacturing is meticulous: The Challenger Mk3 is built by hand from parts that are machined in-house; I was able to witness this machining firsthand during a visit to the factory some months ago. Both its high-mass platter and chassis are precision CNC-milled from single, solid pieces of soft aluminum in thicknesses of 50mm and 40mm, respectively. The 10kg platter’s inherently low resonance is further bolstered by a coating of damping material applied to its underside. A black leather platter cover is also included. At the base of the chassis are three, constrained-layer-damped, adjustable feet (simply use a coin to level them).

According to the company’s website, the Challenger Mk3’s bearing design focuses on exact fit, extremely low friction, and long-term stability (the bearing is covered by a remarkable 10-year warranty). The base of the bearing is made of a proprietary material called Tidorfolon that’s roller-brushed and paired with a special hardened steel axle. The bearing housing has ultra-tight tolerances and uses carefully matched sinter bronze inserts that are self-lubricating. The results? Very low noise and silky-smooth, seamless performance during playback.

Design, Ergonomics, and Playback
The Challenger Mk3’s clean, minimalist design is elegant, solid, and no-nonsense, so assembly of the turntable is fairly straightforward—and quite clearly explained in the illustrated two-page instruction manual. Basically, all you have to do is make sure the cylindrical base is level then carefully place the platter atop it, with the bearing axle on the bottom of the platter fitted precisely into the bearing well built into the chassis. Mounting the tonearm on its mount (attached to the bottom of the chassis) is a snap—just follow the instructions that come with the ’arm. The cylindrical outboard motor can be situated wherever you wish within a few inches of the turntable. Place the slender belt around the platter and around the pulley atop the motor, connect the motor via supplied umbilicals to the small half-moon-shaped controller that tucks in neatly under the turntable chassis, and you’re ready to spin vinyl!

Early in the review period, I received a tonearm upgrade: the TA-2000 (which replaced the TA-1000). The tonearm kit included the basic tools required to mount it and the cartridge, but our analog guru Andre Jennings deserves credit for his painstaking cartridge setup and fine-tuning (I use the wonderful Air Tight PC-7 moving-coil cart). In brief, this tonearm upgrade delivered a greater sense of seamlessness and precision, as resonances were further minimized.

The Challenger’s name rightfully suggests a certain boldness, a contender for big stakes, yet the ’table’s footprint is on the smaller side. It’s exactly as large as it needs to be; the only parts that extend beyond the cylindrical chassis are the motor, the curved controller that rests beneath it and plugs into to a separate 120V power supply (included), and the attached tonearm mount. Though it plays like a far bigger model, this ’table doesn’t take up valuable rack space and is well suited to less-than-palatial listening spaces.

Ergonomically the Challenger Mk3 is simply a pleasure to use. In addition to a pair of tiny lights, the controller includes just two pushbuttons, one to power on and off, and the other to select speeds of 33 1/3 or 45rpm by pushing once for the former and a second time for the latter. A little green light blinks while the turntable gets up to the chosen speed; the light stays solid once speed has stabilized. The turntable runs consistently at its chosen speed, lending an even-handed quality to playback—as if the Challenger were the Steadicam of turntables. Tracking and general operation were also consistently flawless. I don’t want to say I ever took this turntable for granted, but I knew I could count on it the way I did the classic vintage Volvo I used to drive. It would always fire right up and perform solidly and beautifully.

Turntables make for tricky review subjects, as they tend not to have apparent inherent sonic traits in the way that, say, loudspeakers or amplifiers do. Yet, interestingly, I found that this ’table’s sonic characteristics were reflected in its design. Short of saying the Challenger Mk3 sounds a bit like it looks, some of the same descriptors apply. Both visually and sonically it presents a sleek smoothness combined with solidity and seamlessness. Timbre tended towards whatever is on the source.

To illustrate this fidelity to sources, consider Diana Krall Live in Paris (45rpm LPs on ORG). The piano on “S’Wonderful” resonated gloriously and sounded lifelike in its dynamic contrasts, dimensionality, and tone color—just as it should have on this live album. Transient attacks were quick and captivating, and timbre was quite neutral, making for a thrillingly natural presentation from an astonishingly black background—due in part to the Challenger Mk3’s low-resonance soft-aluminum platter and very quiet operation. Krall’s smoky contralto was also expressive and bloomy.

For some jump swing style, I spun another fabulous ORG reissue, Jon Hendricks’ Fast Livin’ Blues, where the racing, raucous energy of his version of “Saturday Night Fish Fry” was reproduced with a smooth, deep sense of the groove. Like a good rhythm section, the Challenger kept the proceedings in hand, yet without anything becoming overly tamed or overdamped. Yet even with its even-keeled control, it didn’t lose one lick of this cut’s infectious sense of freewheeling carousing. As the lyric says, “It was rockin’!”

To satisfy a sudden craving for rock ‘n’ roll, I pulled out The White Stripes’ Elephant (a new entrant to TAS Super LP List in Issue 273), an album for which none of the equipment used in the recording process was manufactured more recently than 1963. Naturally, it’s an all-analog affair; no computers or other digital devices were used at any point in its mixing or mastering. In the past, I’ve heard certain cuts on this album sound a bit too rambunctious and ill controlled on other “lesser” (but not necessarily less expensive) ’tables. Some oomph and inner detail have also been lacking. Not here.

“Ball and Biscuit” retained all of its raw ragged edge and swagger, from Jack White’s searing vintage guitar solos to Meg White’s straight-no-chaser drum fills, which came alive in quite lifelike 3-D glory. On Meg’s rendition of “In the Cold, Cold Night” rich details, such as the ambient reverb of the Toe Rag Studios, were clearly portrayed. The organ’s rumbling deep-dive into the low end was rendered with respectable detail—of course the rest of the system (see below) played a key role here as well. This highly engaging presentation drew me in—and allowed this track’s rather sinister atmosphere to cast its spell. Another standout cut was the awkwardly titled “I Want to Be the Boy to Warm Your Mother’s Heart.” Jack’s plaintive voice pined away while Meg’s cymbal taps were ever so present and strikingly realistic sounding.

You might be wondering what more you get if you spring for one of Acoustic Signature’s models further up the line, or perhaps for some other worthy ’table in the next price tier. Well, you’d probably get improvements in soundstaging and greater inner detail, which might or might not be worth the extra coin. But what you do get here—that you don’t necessarily get elsewhere at this price point—is impressive three-dimensionality, a sense of bloom, noteworthy neutrality and resolution, and low noise. That’s in addition to the Challenger’s first-rate build-quality (as noted, all parts are machined in-house and assembled by hand). In short, this is an exceedingly great turntable for the money—and arguably one that not only competes with, but in many ways exceeds its pricier competition.

I would recommend the Challenger Mk3 to any analog lover whose budget accommodates its roughly $5k price (depending on tonearm and cartridge choices)—and particularly for audiophiles ready to take that next step from more basic components into the world of reference-level gear.

In spite of the generously long review period, I’m hoping to find a way to hang on to this turntable, which offers no tricks, no gimmicks, just the musical goods. Call it a Challenger that punches way above its weight.

Editor’s note: A few of us from TAS visited the Acoustic Signature factory.