As heretical as it may sound, there is audio equipment that looks so attractive that sonic considerations can take a backseat, at least until you actually listen to it. The Accustic Arts gear falls firmly into this camp. Its fit and finish aren’t just appealing; they’re breathtaking. A friend of mine wanted to want to buy them based on their looks alone even before he got a chance to hear them.

The good news, however, is that the Reference Hybrid Tube Preamp II Mk II—or, as they put in German, “Der Tube preamp”—and Mono II not only look fetching but also deliver the musical goods.

As the bilingual instructions in the owner’s manuals indicate, Accustic Arts hails from Germany. Put bluntly, there is no wiggle room on products made in Germany. Germany is, of course, getting a lot of press these days for its phenomenally successful small and mid-sized businesses known as the Mittelstand that form the fiscal backbone of the country’s economy. Accustic Arts fits right in with that ethos of quality and performance.

The Accustic Arts equipment appears to be bulletproof in both reliability and performance. As its name suggests, the Hybrid Preamplifier features a mix of tubes (two 12AX7s per channel) and transistors. The unit is truly balanced from input to output, with four separate signal paths (left +, left –, right +, right –) and a four-element potentiometer to control the volume. A front-panel button allows you to choose between direct-coupled (no coupling capacitors between stages) and AC-coupled operation (coupling capacitors between stages), depending on which sounds best in your system. Three balanced and two unbalanced inputs are provided. Two variable-level outputs are included for bi-amping. A third output, this one a fixed level, can drive an outboard headphone amplifier (although the Hybrid includes a front-panel headphone jack). A theater “pass-though” allows the preamplifier to be combined with a multichannel system.

The same sort of thoughtful design appears to have gone into the power amplifier. It’s pure solid-state, delivering 300W into 8 ohms and 500W into 4 ohms via 12 MOSFETs in each amplifier’s output stage. It effortlessly powered both the Magnepan 3.7i and Wilson XLF loudspeakers. The amplifier’s diminutive size belied its power, which pretty much appeared to be limitless on either speaker—and any amp that can drive the Maggies isn’t whistling “Dixie!” The amp features a protection circuit that will trip if the amp is clipping, or if it detects DC offset from the preamplifier, the latter phenomenon something that can crater your loudspeaker’s drivers. 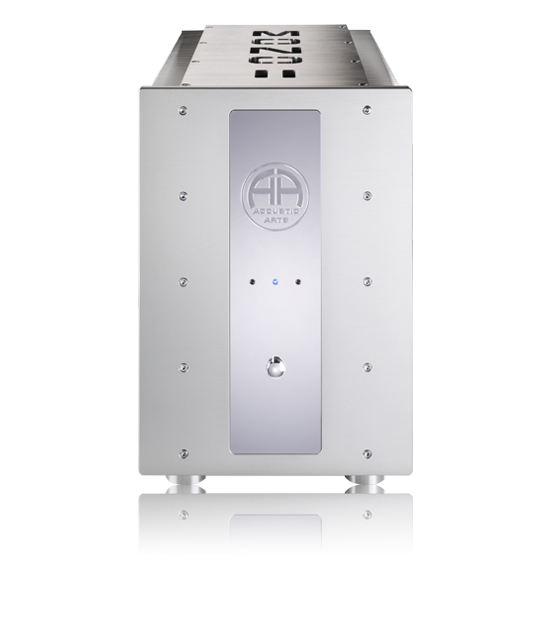 On both digital and vinyl I was impressed by the preamp and amp’s silky midrange and the wealth of detail they produced. Mated together, they definitely supply a sound that lands firmly on the tube side of the sonic spectrum. The preamp is a balanced hybrid design that takes several minutes to warm up. I would emphatically suggest that the amp needs several hours before it sounds its best. Upon startup it will appear to be a bit grainy and compressed. These qualities vanished after a few hours.

In keeping with the balanced design, I used a pair of Ypsilon transformers to create a balanced signal from the cartridge on my Continuum Caliburn turntable to drive the preamplifier’s balanced inputs. From the dCS Vivaldi I used Nordost Valhalla 2 cabling, as I did for the speaker cables as well. The balanced design helped to ensure that there was no audible noise or hum. In fact, even when I ran the amplifiers in single-ended mode from the Ypsilon preamplifier, I was pleased to note that there was also no hum or buzz. Accustic Arts gives you the option of switching off the tubes via a button on the front panel to save on precious tube life.

Like most manufacturers, Accustic Arts makes much of its wide bandwidth and low distortion, and those qualities were in evidence on both CD and vinyl playback. The equipment sounds extremely linear with no part of the frequency spectrum appearing to be overemphasized. It is this very linearity that may strike some listeners as producing a sound that is staid, but it is not. Rather, the Accustic Arts equipment is non-fatiguing and engaging, though it definitely has its own sonic hallmark.

Right from the outset, I was bowled over by its reproduction of a Pablo album featuring Oscar Peterson and Jose Pass playing Porgy and Bess. I’m not sure that I could actually recommend that anyone rush out to procure this album, as the combination of clavichord and acoustic guitar is somewhat peculiar. But it’s certainly an enjoyable lark and the Accustic Arts preamp and monoblocks did a sterling job of capturing the timbral nuances of the clavichord, which first surfaced in the Middle Ages and possesses metal blades known as tangents that strike the strings. Each note was clearly rendered; it was possible not just to hear the clavichord but into the instrument itself, to the point where you could hear how the reverberations were being created. Particularly noteworthy was the large and sonorous soundstage the preamplifier conveyed—the sense of acoustic space was about as good as it gets. Throughout, the interplay between Peterson and Pass on this exotic album came through beautifully.

The same can be said for another album that’s been in heavy rotation recently—a marvelous Angel LP of Kathleen Battle and Christopher Parkening. Several songs by the Renaissance English composer John Dowland may sound simple, but Battle and Parkening bring them to life with great precision and emotion. Battle’s pure and radiant voice was precisely captured by the Accustic Arts. So was Parkening’s fine guitar work. On the Bach/Gounod Ave Maria, the very low noise floor of this Teutonic equipment allowed Battle’s silvery vibrato to emerge as though from nowhere. Spooky.

What about the big stuff? Was the Accustic Arts able to hack it on orchestral powerhouse numbers? On a London recording of Julius Katchen playing Liszt’s Concerto No. 1, the piano was solidly grounded in its own space while the orchestra was spaciously arrayed with each section clearly delineated. The preamp and amplifier had no problem producing orchestral fortissimos and the piano never became swamped by the London Philharmonic. All that amplifier power, for example, allowed the Wilson XLFs to belt out trombone choruses with tremendous vividness and punch.

Still, in this era where everyone seems to be chasing neutrality, it was readily apparent that the Accustic Arts gear does have a sonic signature, a somewhat emollient approach to reproducing music. There’s never going to be a hint of stridency or rebarbativeness with it. Rather, it focuses on the midband, offering a full and slightly dark sound. Take a CD that, if it were an LP, I probably would have worn out by now, Mavis Staples’ One True Vine [ANTI-]. Even in her seventies, Mavis can belt it out like few other singers and her impassioned, full-throated voice came through clearly on cuts such as “I Like The Things About Me.” The backing choruses on the album were always clearly audible but slightly softened. The same went for the bass lines. Cymbals displayed a fine alacrity and clarity, while electric guitars sounded fuzzy and powerful. Distorted? Well, yes. But the truth is that there is a lot of distortion in their sound on this album.

The careful ministering to the treble that the designers of this equipment carried out is also clearly audible on a Delos CD with the flautist Joshua Smith, who performs the Bach’s sonatas together with harpsichordist Jory Vinikour. This is sterling playing by both, and I was struck by the control and limpidity of the sound, especially in the treble region, of the Accustic Arts. Everything was rendered just so, creamy and unflappable, tranquil and poised.

Ultimately, I ended up slightly preferring the Accustic Arts preamp and amps on vinyl rather than digital. The warm and sumptuous sound just seemed to mate very well with analog. Often it’s alleged that German equipment has a somewhat stentorian quality to it. But I didn’t find that to be the case when it came to the Accustic Arts. Instead, I very much enjoyed the ravishing sound of strings, the evocative plangency of a solo piano echoing in the hall, and the ability to discern easily when the pedal was being applied.

If you want an even greater level of fidelity than that offered by this gear—and it does exist—then you’ll have to disburse considerably more funds to attain it. As a point of comparison, my own Ypsilon gear is purer, faster, and more sweeping. But then again, the cost is markedly higher. The fascinating thing about the Accustic Arts is that it offers another potent reminder that for less than stupendous sums you can construct a devastatingly good (and ultra-reliable) stereo system. It is nimble and powerful and, above all, artful.