A Trip to Switzerland and Da Vinci Audio Labs

During the first week of November, my wife and I jetted off to Switzerland to visit Da Vinci Audio Labs in Bern and Soulution LLC in Zurich. It was a fabulous trip, in no small part because Switzerland is (famously) such a fabulously beautiful country. Although I’ve been to many extremely lovely spots over the last few years, none combines the rugged, breathtaking grandeur of Switzerland’s Alps, the bucolic serenity of its countryside, and the medieval look of its cities, especially Bern with its narrow cobbled streets lined with covered arcades and rows of multi-story fourteenth-century houses. (Those of you interested in a representative peek, should take a look at the photos I’ve posted at jlvalin.zenfolio.com/p653322799.)

From a strictly audiophile point of view, the fact that we were visiting Da Vinci Audio Lab and Soulution—the makers, respectively, of the best pivoted tonearm/ magnetic-bearing turntable/moving-coil cartridge I’ve heard and of the most transparent solid-state amp/preamp I’ve heard—didn’t hurt.

I will be discussing Soulution in a separate blog. Here I want to tell you about Da Vinci. To begin, Da Vinci is as close to a “family business” as any hi-fi outfit I’ve come across. It is run by chief engineer Peter Brem and his partner Jolanda Costa—a couple in real (which is to say, non-audiophile) life and two of the sweetest, kindest, most hospitable people Kathy and I have ever met—and further staffed by Jolanda’s son Sandro, her daughter Nathalie, and her son-in-law David. In keeping with the family theme, Da Vinci’s “showroom” is the spacious living room of Peter and Jolanda’s home—a beautiful and beautifully furnished farmhouse attached to a lovely old villa in the village of Muri, just outside of Bern. 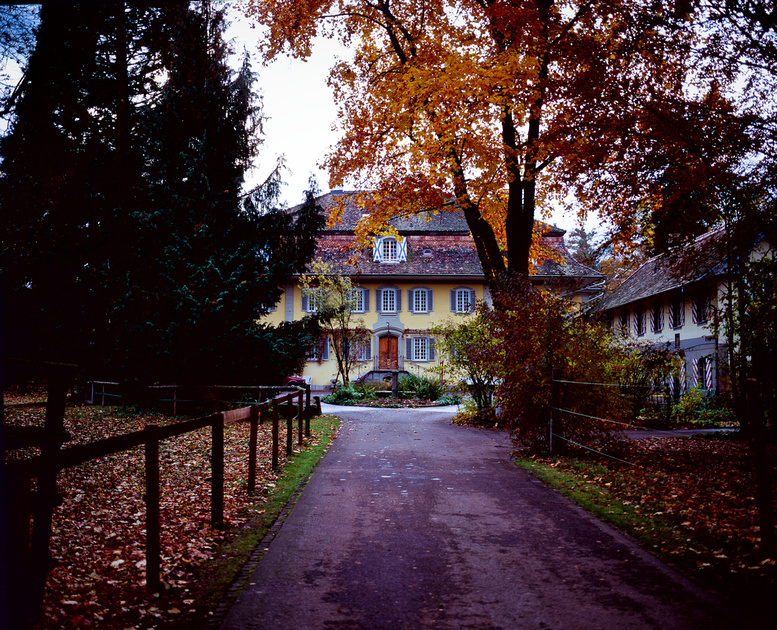 The “Da Vinci Corner,” Peter and Yolanda’s farm house and the yellow villa it is attached to

If you read TAS, you already know how highly I regard the AAS Gabriel/Da Vinci turntable (reviewed in Issue 191), Da Vinci Grandezza tonearm (reviewed in Issue 191), and Da Vinci Reference Cartridge Grandezza (reviewed in Issue 193)—each won one of our 2009 TAS Product of the Year Awards, and each richly deserved the honor. In my experience, only the new Walker Black Diamond linear-tracker with air-bearing platter and arm (equipped with the Da Vinci Reference Cartridge Grandezza) competes with the Da Vinci record-playing system in neutrality, transparency, resolution, and sheer naturalness of sound—and I’ve heard a few record players in my day. 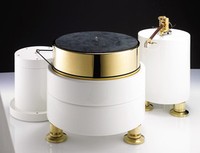 But Peter Brem—an endearingly wry man who is also a greatly gifted recording engineer with a genuine love for music—doesn’t just make world-class record players; he and his team also design and manufacture world-class audio systems. After listening to Peter’s electronics and speakers at last year’s CES, I suspected that the rest of Da Vinci’s gear was every bit as marvelous as its ’table, arm, and cartridge. Now, having had the incomparable pleasure of listening to that system for almost a week alongside this urbane, amusing, talented man in Da Vinci’s “showroom,” that suspicion has turned into a certainty. I brought more than a dozen LPs with me to Switzerland—LPs whose sound I know by heart—and I can honestly say that as good as my stereo is at home (and it is the best I’ve had in my home), it comes no closer to the absolute sound than what I heard in Peter and Jolanda’s Muri farmhouse. 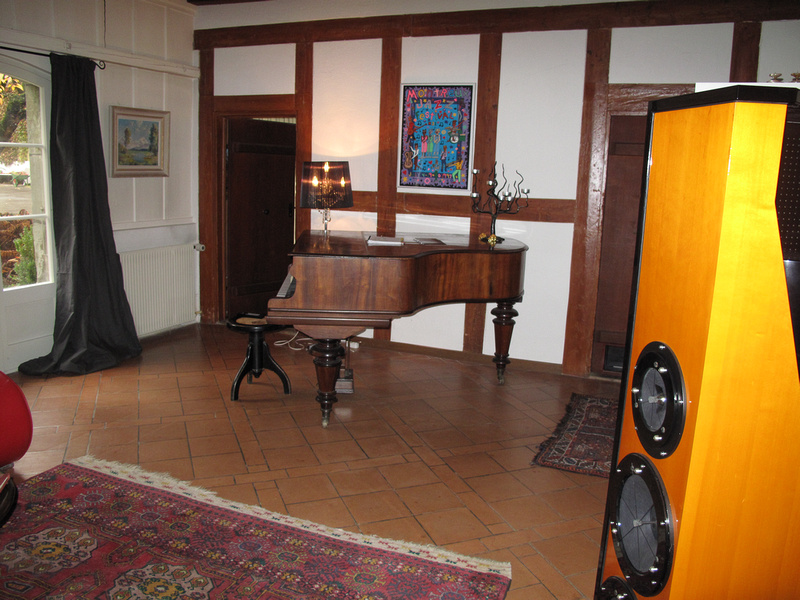 Oh, there are differences, of course—in emphasis, in dynamic, in gestalt. This is to be expected, since the two systems could scarcely be more different. My Magico M5/Soulution system at home comprises solid-state electronics of the highest order and low-sensitivity multiway dynamic speakers in a sealed box  that are also of the highest order. Peter’s electronics are entirely tube: the four-box Preziosa S single-ended-triode monaural preamps, with interstage transformer coupling (shades of Audio Note), transformer potentiometer (!), balanced and single-ended inputs and outputs, fastidious point-to-point wiring, and outboard tube power supply/rectification; the four-box Preziosa S single-ended-triode (300B) 6Wpc monoblocks, with (once again) interstage transformer coupling, fastidious point-to-point wiring, the highest-grade parts known to man, and outboard “Majestic” tube power supplies; and, finally, the fascinating Da Vinci Virtù loudspeaker. 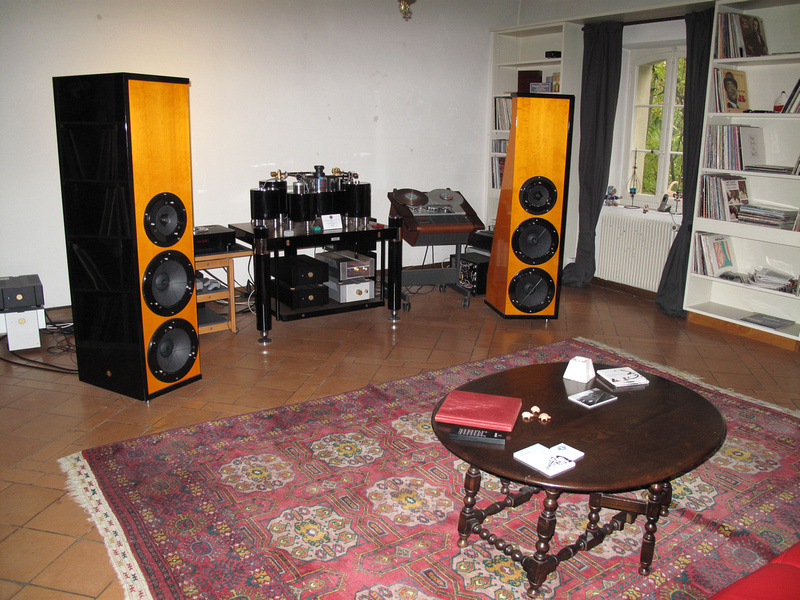 The Virtùs and the Da Vinci system

I singled out the Virtùs in my 2009 CES report as producing one of the best sounds of the show. (On my prize LP of the Prokofiev First Violin Sonata, with Nadia Salerno-Sonnenberg and pianist Sondra Rivers, they produced what is, I think, the most realistic facsimile of violin and piano I’ve yet heard on a stereo system at a trade show.) At that time, the Virtùs were unique to my experience: a half-octave, open-baffle loudspeaker with an “enclosure” made of tonewood (a term used to describe various woods used to make musical instruments) and a special wood damping compound and a single, full-range, field-coil driver, supplemented in the bass by two 12-inch woofers crossed over 24dB/octave at 100Hz and driven by integral 100Wpc MOSFET amps. The entire system was analog equalized to achieve perfectly linear frequency and phase response.

All of the Virtù’s drivers are designed and manufactured by the French firm Fertin. (Fertin speaks proudly, on its Web site, of building its drivers to the same exacting standards that Tannoy and Altec used fifty-to-seventy-five years ago; the owners also say, quite openly, that they prefer vinyl and tubes to digital and solid-state; indeed, their speakers are designed to make the most of each and to give music lovers with similar tastes no good reason to listen, any longer, to transistor amps or drivers made of “embossed sheet metal with plastic membranes.”)

The Fertin full-range field-coil driver Da Vinci uses is a very-high-sensitivity (100dB) 9-inch doped-paper cone with a wondrous spider-like suspension of carbon wires that acts as a “surround.” (There is no surround in the traditional sense.) Fertin claims that its carbon-wire “surround” reduces the effects of cone breakup, lowering distortion and improving bass, transient response, linearity, and resolution. (The field-coil driver is powered by Da Vinci’s LS power module, which includes a Da Vinci power supply and a Da Vinci active analog equalizer.) The Fertin 20ex Model 7 costs many thousands of dollars as a raw part. The equally expensive Fertin 30ex Model 7 woofers are 12-inch doped-paper cones with carbon-fiber-wire surrounds. Da Vinci uses solid bronze baskets for all three drivers. 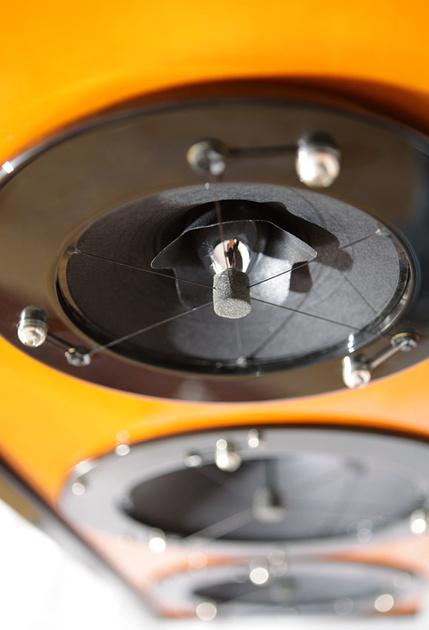 At first look, these open-backed, tweeterless speakers make an odd impression. You’d think they couldn’t possibly sound any good, much less great. But you’d be wrong. (I have since heard at RMAF another three-driver, half-octave, open-baffle speaker—the Granada from The Lotus Group—that is almost identical to the Virtù, save for the facts that it uses the Japanese Feastrex field-coil driver with its two supplemental woofers and an active digital equalizer. It, too, was a wonderment; Robert Harley called the Granada the Best Sound of Show and although I preferred the Vandersteen 7s, the Granadas were a close second.) 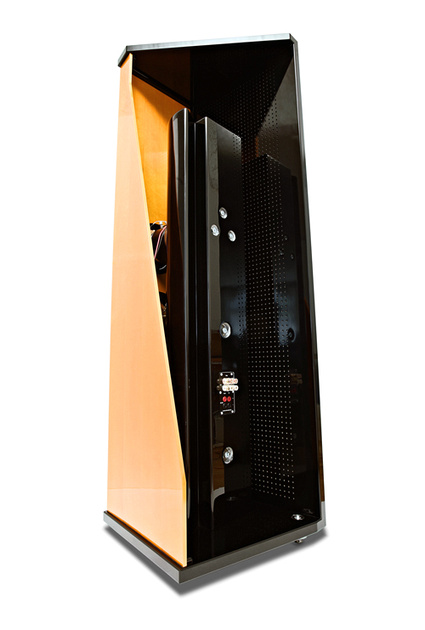 In Switzerland, on really good recordings, the Virtùs were uncannily lifelike; moreover, their realism was of a different order than that of other great speakers. On Peter’s mastertapes (he keeps a full-bore Studer studio deck in his system to play back his own recordings, which he uses as references), the Virtus and the Da Vinci electronics recreated the sound of a singer and accompanists in a church as if I were sitting before that singer and those accompanists in that church. It was one of the most jaw-dropping listening experiences I’ve ever had. I’m used to the more-or-less-realistic reproduction of singers and musicians; I’m also accustomed to hearing the ambience of the hall they play in. What I’m not used to—and what the Virtùs were capable of—was feeling as if I had been transported to an entirely different venue, as if I weren’t hearing reproduced music in a listening room but were present at the event. The illusion of “being there” was that much more complete. I’m guessing that the Virtùs’ astonishing realism is primarily the effect of their full-range field-coil drivers in their open baffles, although I also assume that Peter’s electronics were playing a substantial part.

I’m not sure that the Virtù/Da Vinci system was quite as full-range or as dynamic as my M5/Soulution system. (I’d have to hear them side-by-side to know for sure.) For instance, I didn’t think it reproduced the attack and decay of Attila Bozay’s zither with quite the same completeness as the M5/Soulution setup. And yet…the entire Da Vinci system was doing something so much more “right” when it came to transporting me almost bodily to other times and other places that I didn’t mind or care.

I close this too-brief blog with a picture of Jolanda and Peter in their beautiful listening room. Though I went to Switzerland to hear a stereo—and heard one of the truly and uniquely great ones—I came home basking not just in the warmth of my memories of the Da Vinci system but in the warmth of the friendship Peter, Jolanda, Sandro, Nathalie, and David showed us. This is something Kathy and I will always treasure. 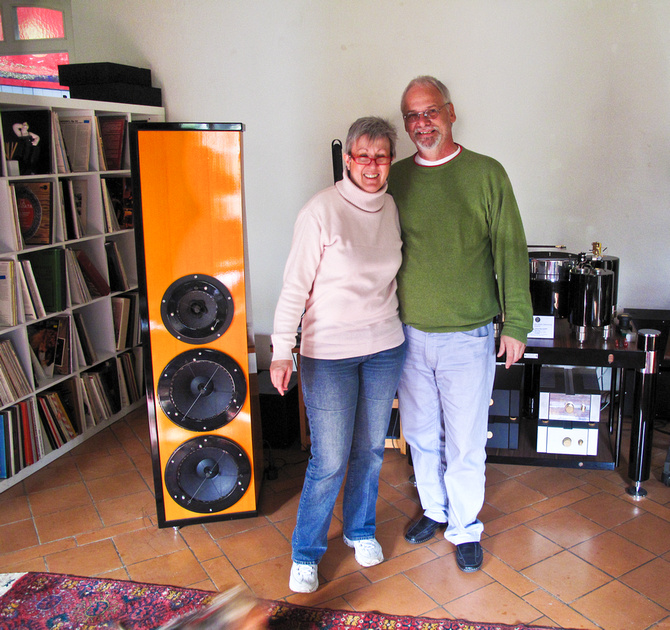 Addendum 12.1.09: A number of people have asked me about the assembly of Da Vinci products. Here is a little portfolio of photos taken at Da Vinci’s Muri shop, showing the Da Vinci “family,” various parts and products, and various aspects of assembly. Everything at Da Vinci is assembled by hand, although some parts are made by other firms for Da Vinci. 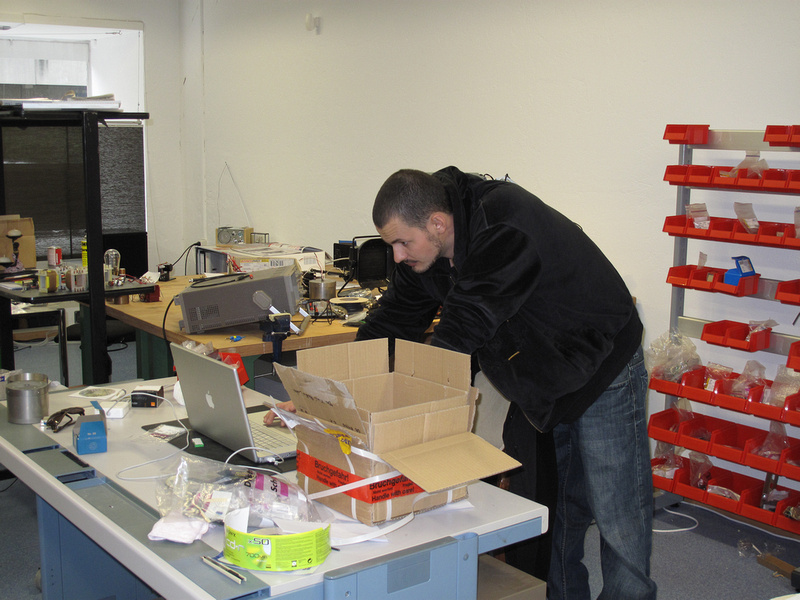 David working at his computer 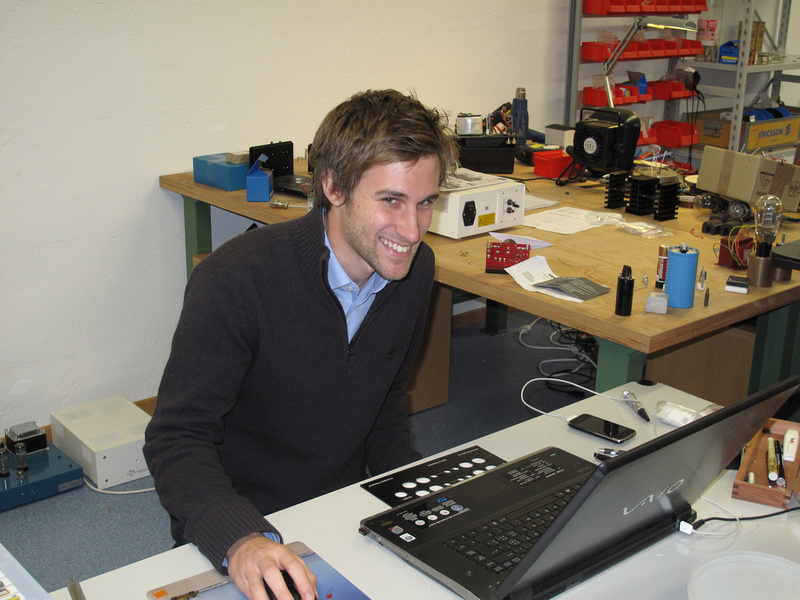 Sandro working at his desk 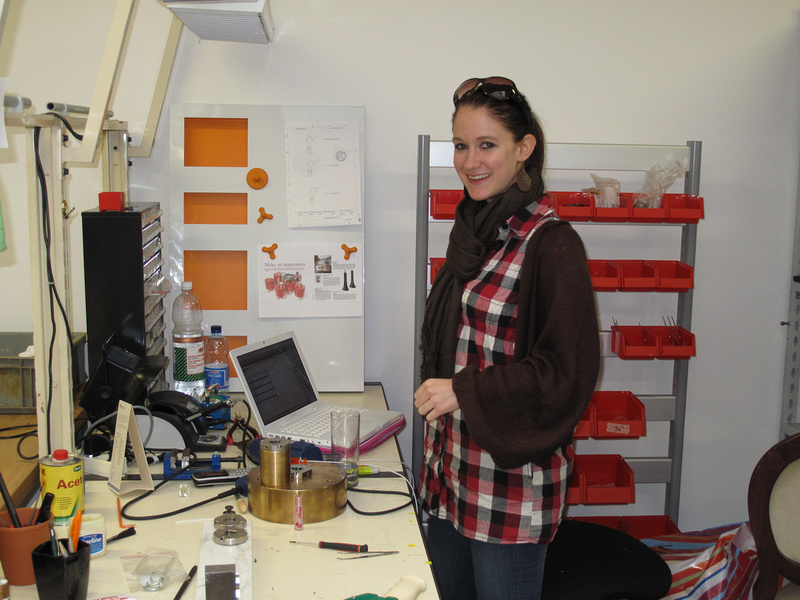 Nathalie at her work station 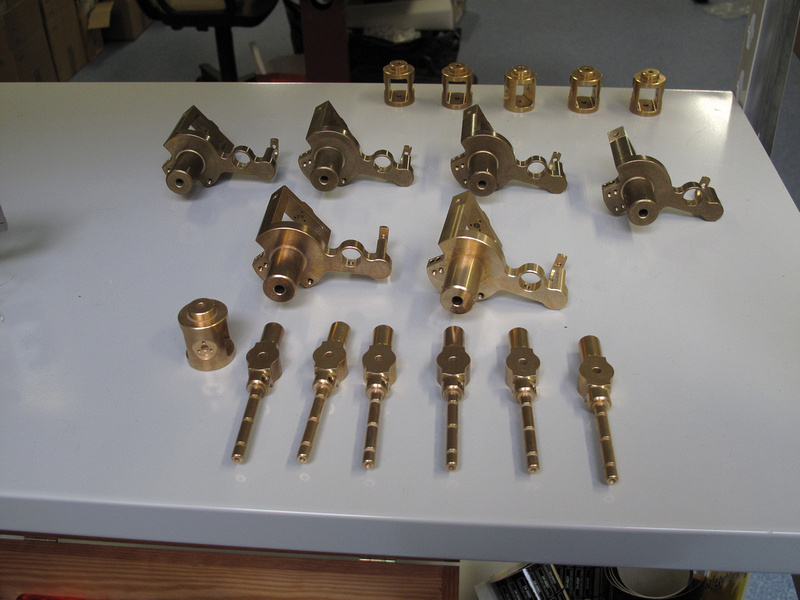 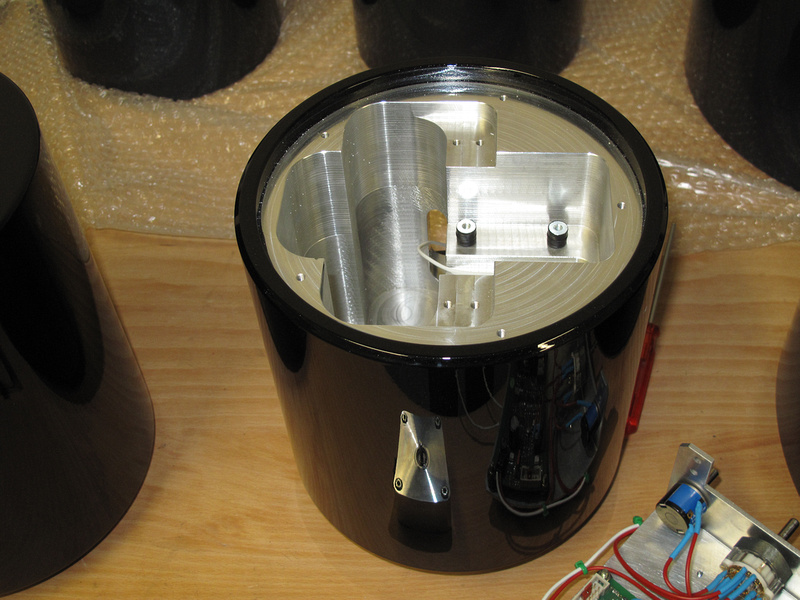 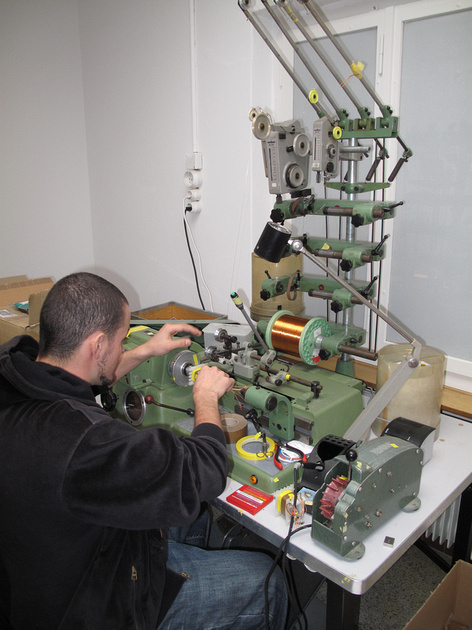 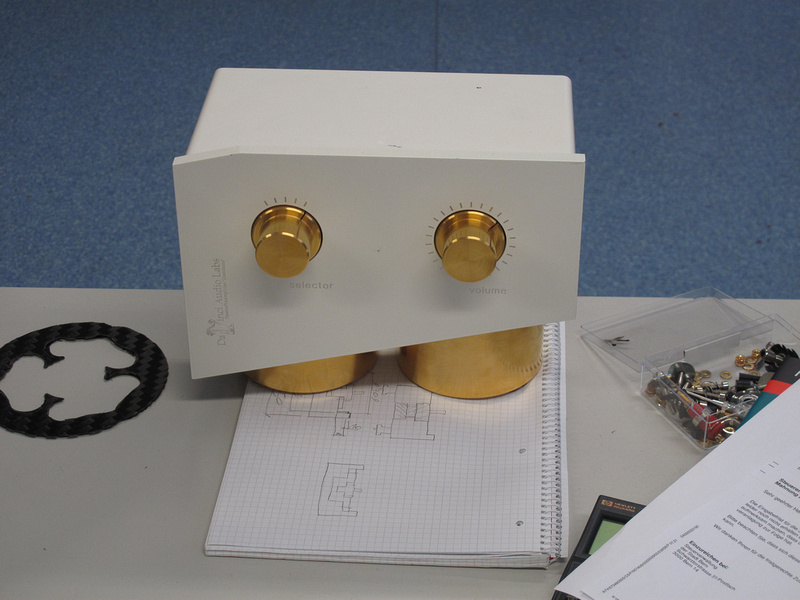 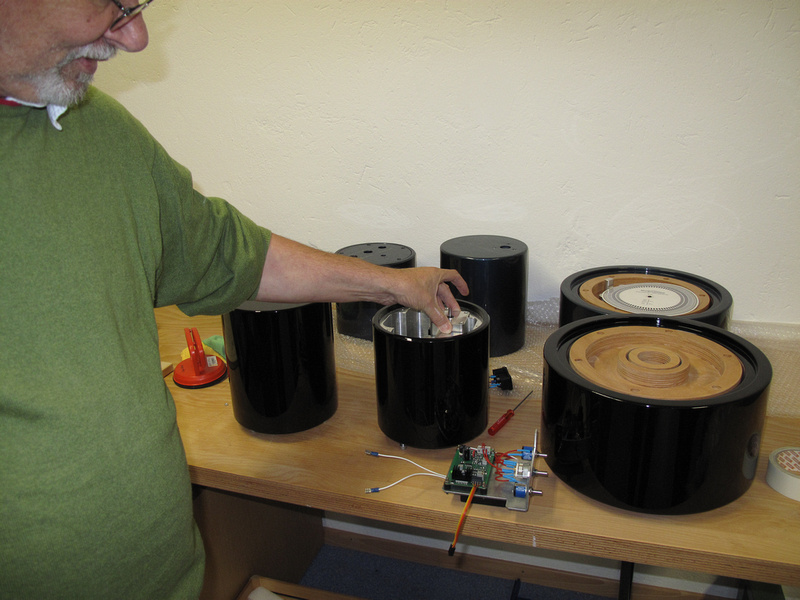