While virtually all Class D amplifiers use off-the-shelf output modules, the diminutive Starkrimson is built from a proprietary circuit topology of Orchard Audio’s own design. The Starkrimson features gallium nitride (GaN) transistors rather than silicon devices, which allow the switching stage to operate at a super-fast 800kHz, almost three times faster than conventional switching stages. This leads to fewer switching artifacts, lower THD, and higher SNR. With 150W into 8 ohms on tap, the Starkrimson yielded a remarkably transparent soundstage and a spacious presentation. The musical tapestry was vibrant with transients unleashed to their full dynamic potential. What also endeared it to reviewer Dick Olsher was its ability to scale dynamic peaks without changing its tonal character. This was coupled with stunning resolution of complex passages, which left DO thinking that this should not be happening with a $1500-per-stereo-pair amplifier. The Starkrimson sounds like a high-definition Class A amplifier, and surely offers a glimpse into the future of Class D amplification. An absolute must-audition, and our Budget Product of the Year. 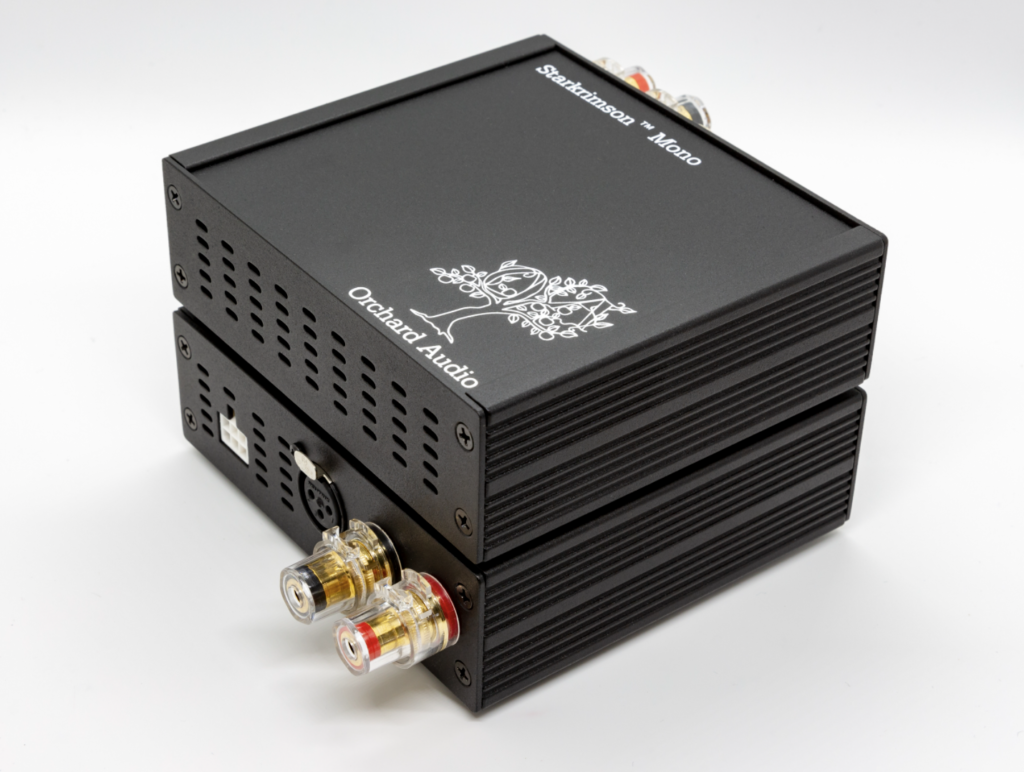 BAT’s first all-tube integrated is a stunning piece of industrial art that delivers over 55Wpc of pure triode power. Its foundation is the Russian 6C33C-B power triode, originally designed for avionics applications and famously used in the MiG-25 fighter jet. The focus is on simplicity of operation and reliability. A key feature is automatic bias, with each output tube having its own dedicated bias circuit. Folks, be prepared to buckle up and hang on tight, as this “BAT mobile” sounds far more powerful than a comparable KT88 amp. It shifts gears without changing its sonic character and fleshes out an orchestra’s power range with a big-tone presentation. The core of the midrange is expressive and dynamically nuanced, felicitous of female voice and violin overtones. Transients are well defined over their entire time scale from the point of attack to full decay. As a consequence, resolution of low-level detail is admirable without being etched or analytical in nature. Textures are free from the usual tube-amplification colorations. Expect an overall presentation that is rather neutral, sounding like the real thing with believable tonal color saturation and 3D soundstage dimensionality. It is above all else a superb demonstration of triode power, and our Integrated Amplifier of the Year Award winner. 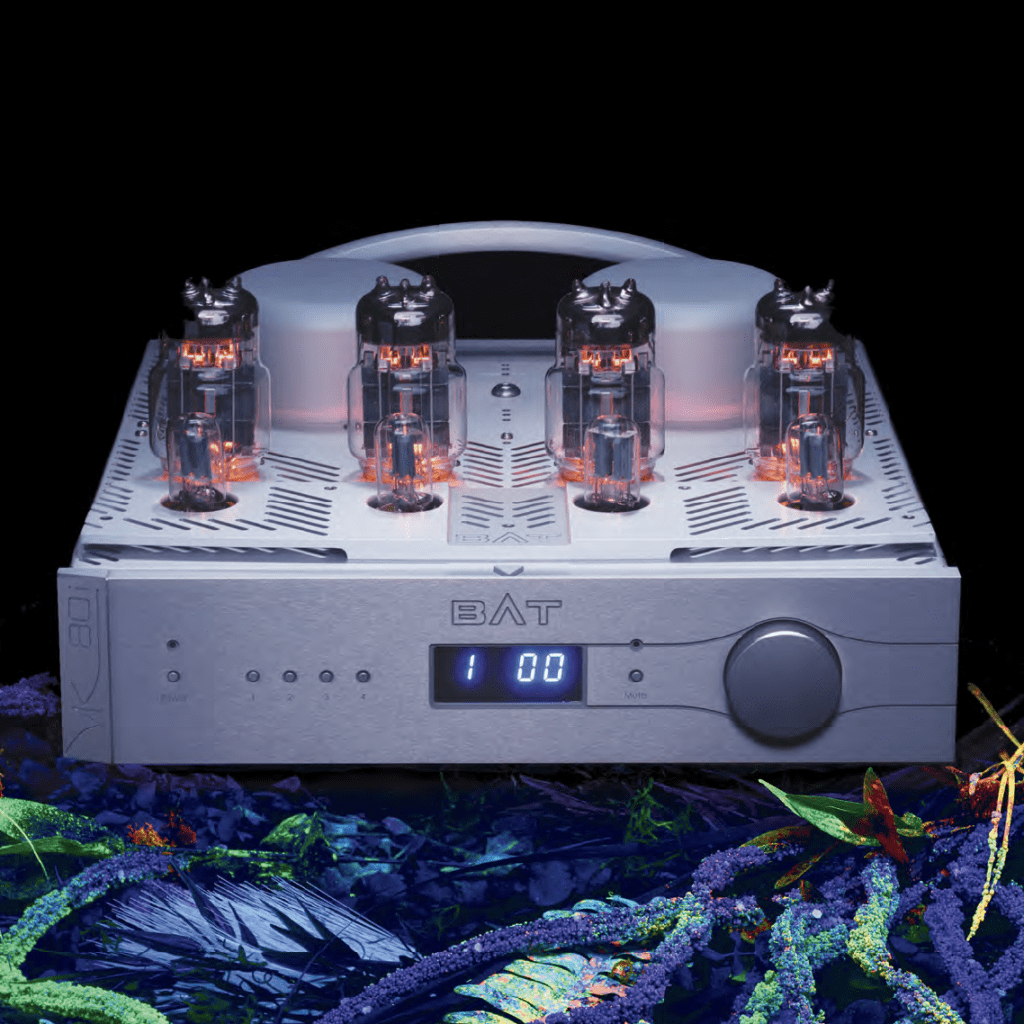 NAD’s C298 is built around a new Class D output stage called “Eigentakt” (“self-clocking”) that represents a significant technical advance in switching amplification. The C298 is rated at 185Wpc into 8 ohms and 340Wpc into 4, and is packed with features, including balanced and single-ended inputs and line outputs for daisy-chaining multiple amplifiers, a bridging function for monaural operation, and an auto-on feature when a signal is detected. The C298 sounds like a powerhouse, with effortless dynamics, a tight and solid bottom end, and a general sense of ease in complex passages. The C298 goes very low in the bass, has a nice sense of midbass heft and weight, and delivers outstanding dynamic punch. It also has an unusually satisfying ability to convey music’s rhythmic flow and forward propulsion. The midrange has nice presence, with a bit of forwardness from the upper mids to the lower treble imparting a lively quality. The C298 is a lot of amplifier for the money, and our choice for Solid-State Power Amplifier of the Year. 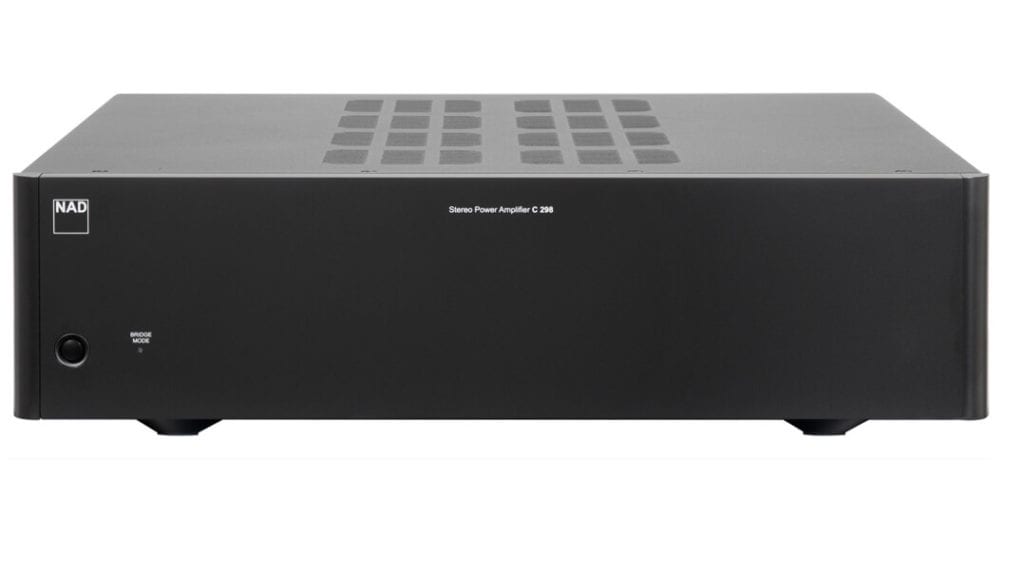 These svelte monoblock amplifiers seem intent on disproving the old adage that size matters. Outputting a whopping 1200 watts into a 4-ohm load, they compete in the bass region with amps costing oodles more, and yet they weigh only 27 pounds each. A 12AU7 tube on the input stage helps to ensure felicitous tonality, but it is a Class D output power module that is at the heart of this ingenious beast. Its grip in the bass region is tenacious and effortless, allowing it to form the foundation of an expansive soundstage. Detail retrieval in all frequency spectrums is exemplary. The low noise floor is instantly apparent, as the Stellar excavates small nuances that help create the sense of a live performance rather than an electronic reproduction. The Stellar represents a considerable advance for Class D amplifier performance (though it cannot entirely efface a slight glare in the treble region that has always marked digital amplification). The overwhelming power, sweep, and speed of the Stellar ensure that it is a remarkable creation, one whose sonic prowess should give more than a few rival amplifier manufacturers the willies.

Although rated at 150Wpc into 8 ohms, the Antileon EVO stereo amplifier has the size, weight, and construction that suggest an amp of five times that power output. This is because the Antileon EVO delivers all of those 150 watts in Class A. And what sweet watts they are. The Gryphon’s triumph is delivering the great virtues of Class A operation—seductive warmth, liquid textures, and a sense of ease—with tremendous speed and dynamic authority, along with visceral excitement and energy. The sound is warm and utterly liquid—almost voluptuous—without sounding thick, colored, or closed-in. Its warm harmonic richness and absence of grain and glare reveal the beauty of tone colors in a way that is nothing short of seductive. The dual-mono design imbues the Antileon EVO with unflappable authority. It exerted an iron-fisted grip on the Wilson Chronosonic XVX’s big woofers, delivering “center-of-the-earth” solidity and impact. Throw in spectacular build-quality and striking industrial design, and you not only have one of the great modern Class A amplifiers, but also our 2021 Solid-State Power Amplifier of the Year Award winner. 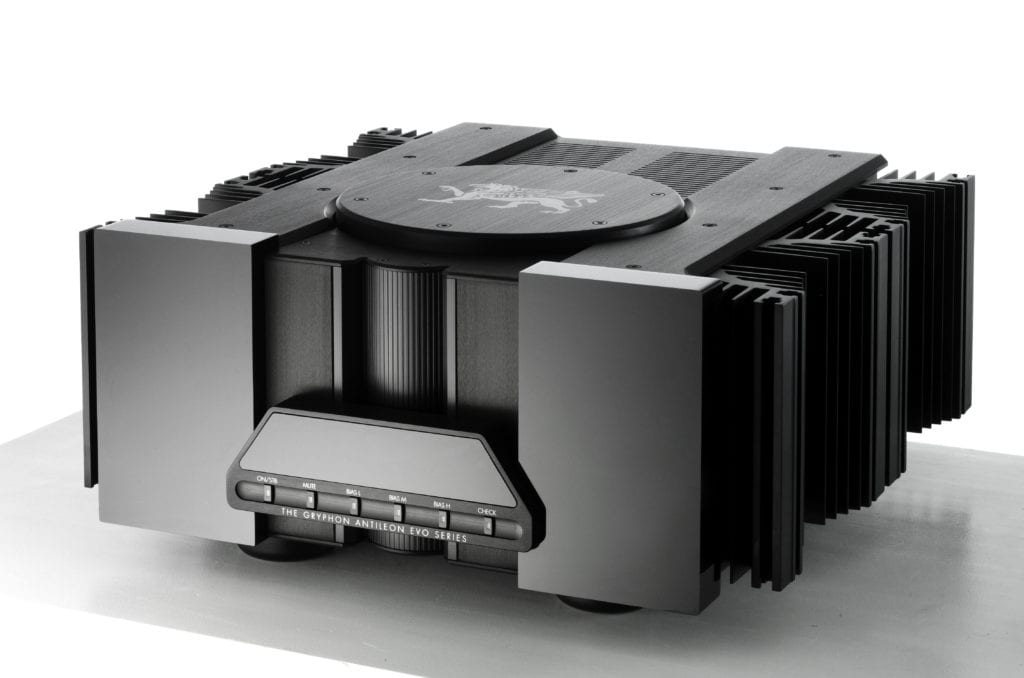 The LA4 has been refined over time, and in its MkIII incarnation it features lower gain and improved feedback implementation. The Signature version includes premium Mundorf silver/gold coupling caps and premium tubes. It would seem that designer David Shaw has cracked the code for preamp excellence. His classic recipe consists of a 6SN7 gain stage, a tube buffer, a tube-rectified power supply, and point-to-point wiring. This elemental combination, together with excellent engineering, makes the LA4 Signature into a formidable line preamp. Tonal colors are reproduced with superb fidelity, vibrant and engaging. Dynamic shadings are nicely drawn out from soft to very loud, at times being nothing short of explosive. Although the stock tube complement isn’t particularly romantic sounding, it is responsible for exceptional bass definition and iconic 3D rendering of the soundstage. The LA4’s most compelling sonic attribute is tonal gravitas—an authoritative portrayal of the lower midrange, delivered with realistic timbral density. In all, the LA4 offers exceptional sound quality that does justice to the sonic promise of the 6SN7. Add superb build-quality and a bargain price, and you have our Tube Preamplifier of the Year Award winner. 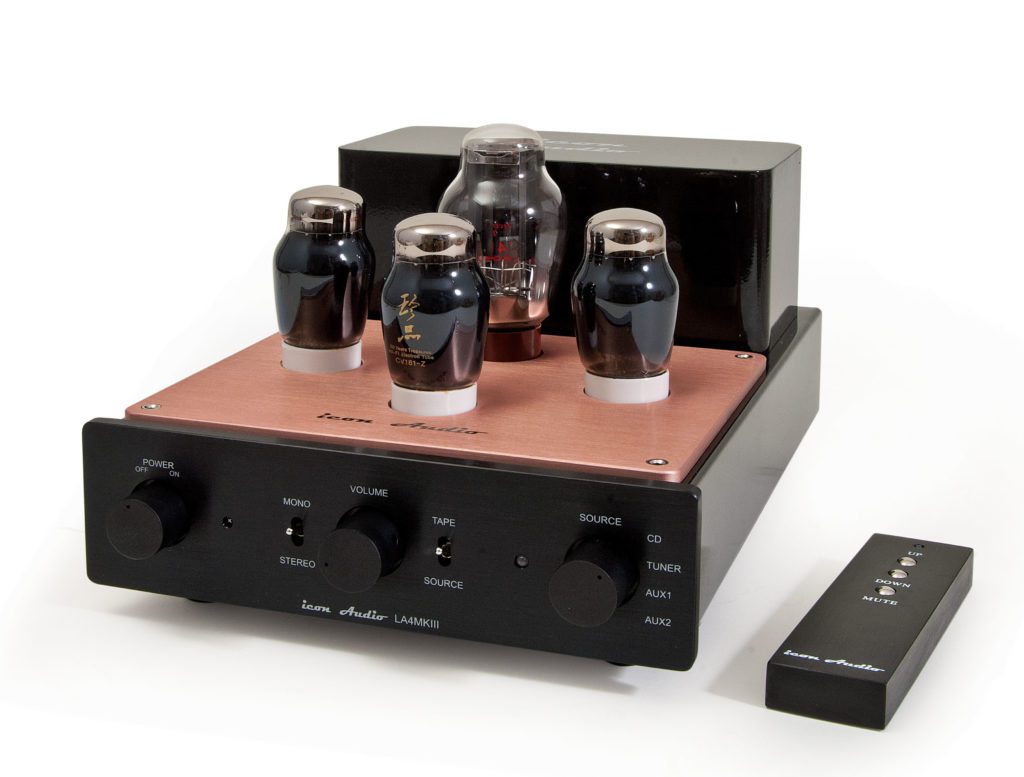 The Hybrid Stereo power amplifier from Absolare isn’t a pure tube amplifier, but it uses tubes in its input section, and those tubes provide nearly all the amplifier’s voltage gain. More importantly, however, the Hybrid Stereo Signature Edition sounds like a pure tube amplifier, and a great one at that. As its name suggests, the Hybrid combines tubes in the front end with a 275Wpc (4 ohms) solid-state output stage. Yet there’s no hint of transistors in the Hybrid’s sound; it has astonishing liquidity of timbre, is utterly grain-free, and projects that elusive sense of midrange presence that is the hallmark of the best SETs. The Hybrid creates a directness of musical expression—of hearing nothing between you and the music—that is unique among solid-state amplifiers in RH’s experience. In fact, Absolare has managed to capture much of the magic of the company’s reference-class Passion Preamplifier and Passion SET power amplifier in the Hybrid Stereo, a product that is compatible with a wider range of speakers thanks to the solid-state output stage. The circuit is ultra-minimalist in design, and executed with the world’s finest component parts. Finally, the gorgeous leather-clad casework, available in a variety of colors and stitching, exudes luxury. It all adds up to our Tube Power Amplifier of the Year Award winner. 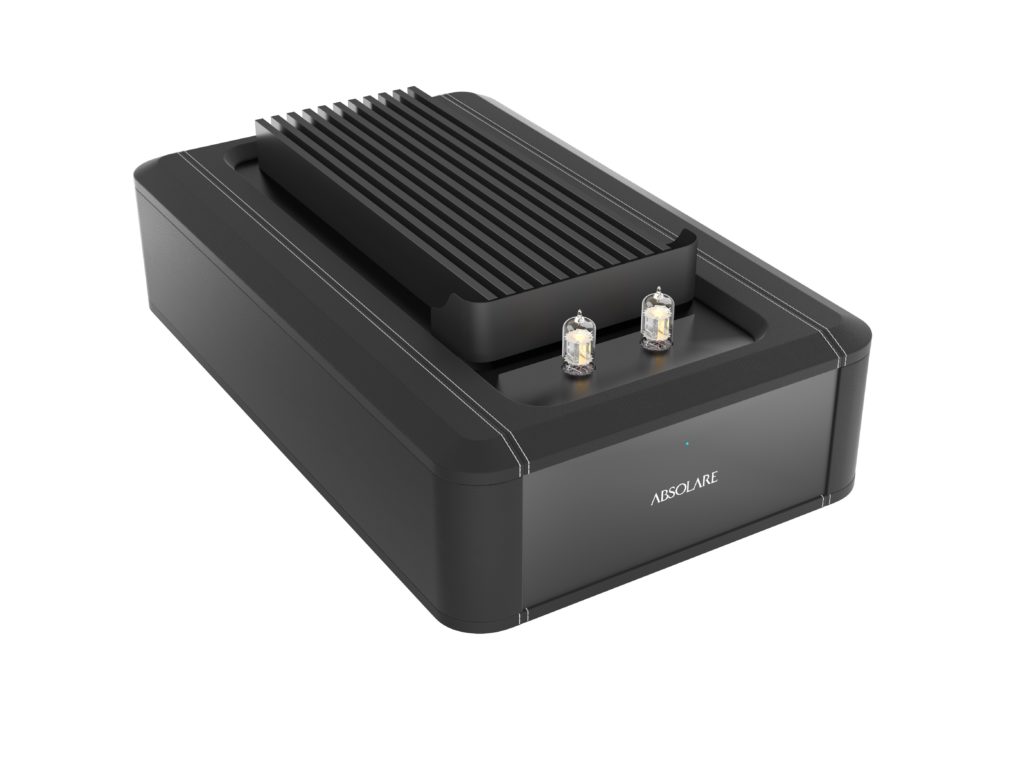 Philosophical Notes: Secrets You Need To Be An Audiophile, p. 2

2021 Product of the Year Awards: Stand Mount Loudspeakers of the Year

About two years ago, my aging Sota Cosmos turn- table […]

I enjoy tubes and particularly like tube phonostages. I’ve owned […]