High Resolution Technologies Stage IV Loudspeaker/Amplifier System
$7000 (as reviewed)
And now for something else entirely different from ordinary speakers. The modular HRT Stage IV review system consisted of twelve mid/bass drivers (each channel!) arranged in a rectangle with a four tweeter sub-array running vertically down the approximate middle. (Four mid/basses in two columns to one side, eight to the other side in two columns of four. The system is modular, allowing you to choose the number of speaker modules.) This arrangement projects sound forward in a big way: Walk behind and the output almost vanishes over most of the frequency range. The system as reviewed was supplemented by a REL subwoofer. Like the Larsen Model 9s but via a different method, the Stage IV system really erases the listening room around you, leaving you immersed in the recorded acoustic environment. The system is subdued in the presence range: You might want to EQ presence up somewhat. But perceived distortion is very low, and the directional nature of the speakers puts you in the recorded space in a striking and very satisfying way. This is what high end is—or at least ought to be—all about. (The system is supplied with a pair of Sound Anchor stands, the Stage stereo amplifier, a REL S/3 subwoofer, and custom Furutech cables.) 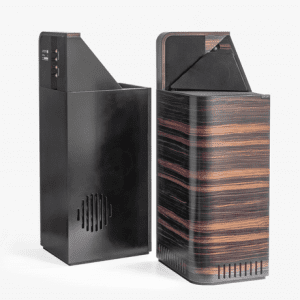 Larsen Model 9 Loudspeaker
$14,995
The Model 9s are the most recent and, by a considerable margin, the best embodiment to date of the unusual but very effective design principles developed by designer John Larsen, based on and extending the earlier work of Stig Carlsson. Like other Larsen models, the Model 9 calls for placement against a long wall, some distance from either adjacent corner. The speaker has a wide dispersion pattern frontally, but the wall placement gives it “halfspace directivity” from the bottom up. The result is very close to a theoretical ideal of uniform response into the room, but with long-delayed first reflections since there is in effect no back wall reflection—the distance to the side walls makes those reflections also long delayed. This, combined with the high-quality drivers, makes the sound of the Model 9s truly remarkable. Especially when a slight prominence around 500-600Hz is removed with EQ, the overall response becomes very nearly neutral in a way that escapes speakers with highly variable radiation patterns. And the absence of early reflections makes the sound very precise. An instant classic.