AXPONA 2018 starts out with a new location and a new attitude. The new location is the Renaissance Schaumburg Hotel and Convention Center in Schaumburg, Illinois, which is a 15–20 minute ride from O’Hare International Airport. The new attitude is one of success from an improved experience for show attendees. There were lots of upbeat exhibitors and attendees and plenty of variety among product offerings for all types of listeners and/or their preferred equipment types.

With a bag of vinyl, I set out to explore the reported 160+ rooms to find new analog products at the show. Given the size and challenge involved in finding everything new in analog offerings, it is likely I may have missed some products. I apologies in advance if that is the case. With that said, let’s get started. 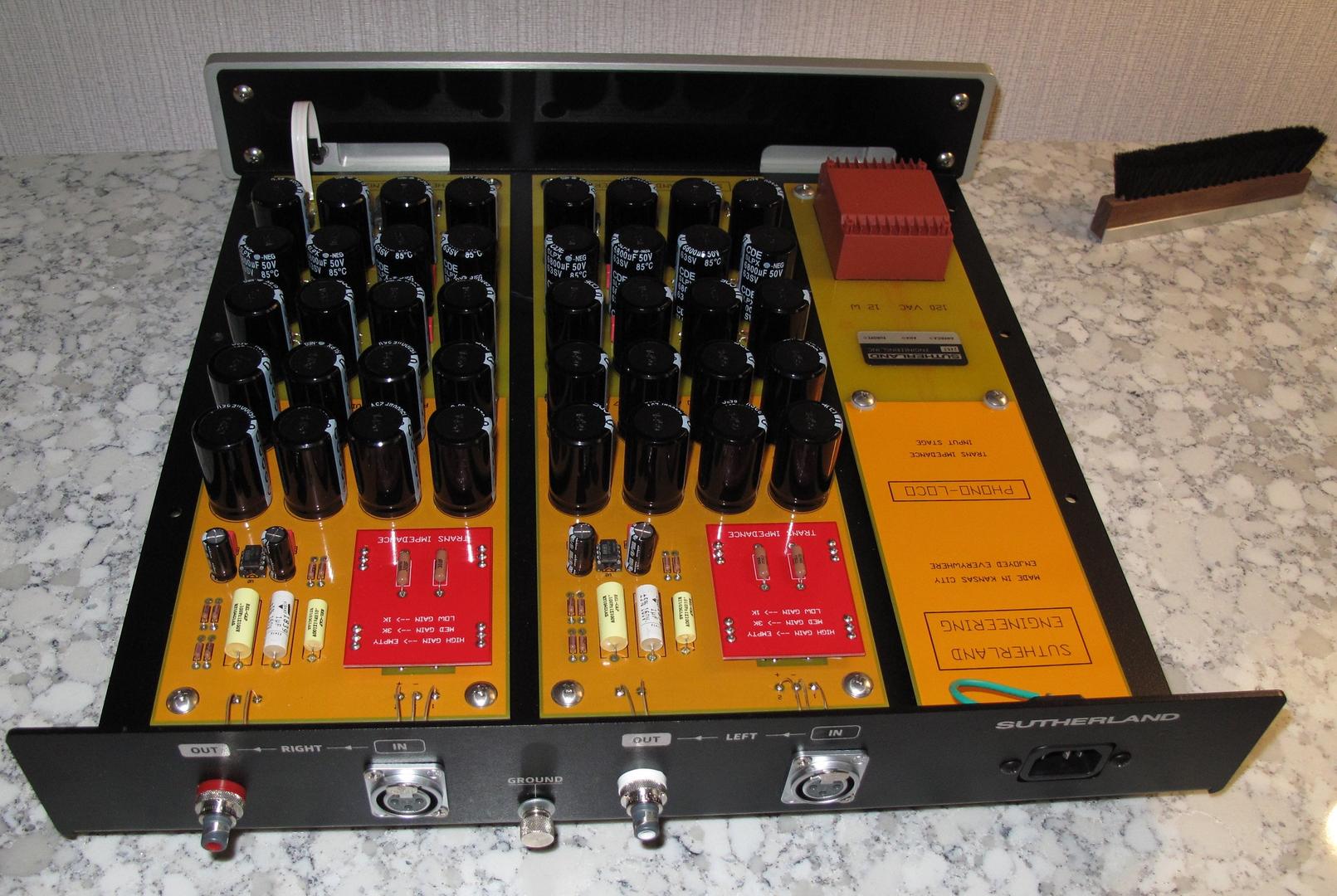 Sutherland Phono Loco Phonostage
Ron Sutherland of Sutherland Engineering showed off his new Phono Loco ($8400) current-input (transimpedance amplification) phonostage at this year’s AXPONA 2018. Unlike a voltage-input phonostage, transimpedance amplification utilizes the cartridge’s current output to feed the current-input stage of the phono section. Once the signal has gone through this stage and been amplified, it becomes a voltage output. Where this conversion from current-to-voltage takes place within the phonostage is at the discretion of the circuit designer, but in most cases it is probably done after or during the first stage. The Phono Loco has only XLR inputs due to the requirement for differential/balanced connection. There are no loading options required for a current-input stage. There is also no fixed default gain setting (gain will vary somewhat based on the cartridge impedance and output current). However, Phono Loco does incorporate a +6dB or -6dB gain setting for the output amplification, if the nominal level needs to be increased or decreased. The output of the Phono Loco is RCA single-ended. An evaluation in the pages of TAS could be upcoming.

Channel D Lino C Phonostage
Channel D has also introduced a stand-alone current-input phonostage called the Lino C. Derived from a section of its Seta L20 phonostage, the Lino C is current input only. It contains balanced only inputs with XLR input connectors while providing both balanced (XLR) and single-ended (RCA) outputs. The Lino C allows the gain to be adjusted over a 12dB range around the fixed gain set by the connected cartridge. Channel D claims adherence to the RIAA curve is better than 0.1dB from 20Hz–20kHz. The Lino C also allows the RIAA EQ circuit to be bypassed/disabled on the balanced XLR outputs for a “flat” signal—useful for LP-to-digital transfers using software like Channel D’s Pure Vinyl. The price of the Lino C is $2499. There is an option for inclusion of an AGM rechargeable battery power supply ($TBD). This is an interesting product that I’d like to evaluate in TAS. 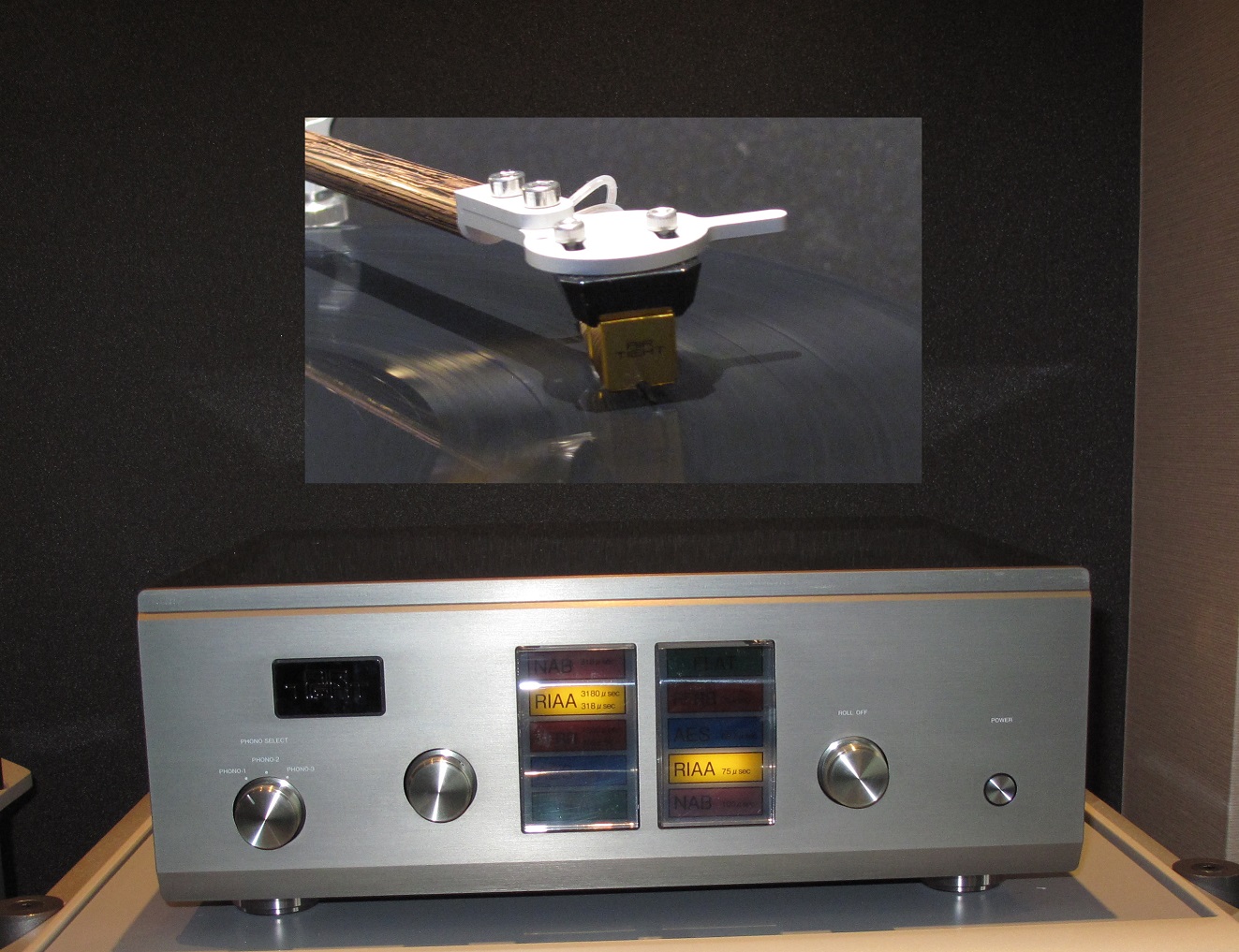 Air Tight ATE-3011 Reference Phonostage and Opus-1 Mono Cartridge
Air Tight displayed the new Opus-1 Mono cartridge and ATE-3011 Reference phonostage, both $TDB. I listen to the Opus-1 Mono cartridge with a few pre-1950 LPs and the selectable EQ curves available on the ATE-3011 phonostage made a difference. Given that many of the pre-1950 monos have different EQ curves, the ATE-3011 allows for five independent selections of both turnover and roll-off to get the user close to the ideal curve for the particular record being played, if the user knows which curve settings to select. The ATE-3011 also includes three inputs, 40dB of gain (step-up transformer or head-amp required for low-output moving-coil cartridges), and tentatively two RCA outputs. 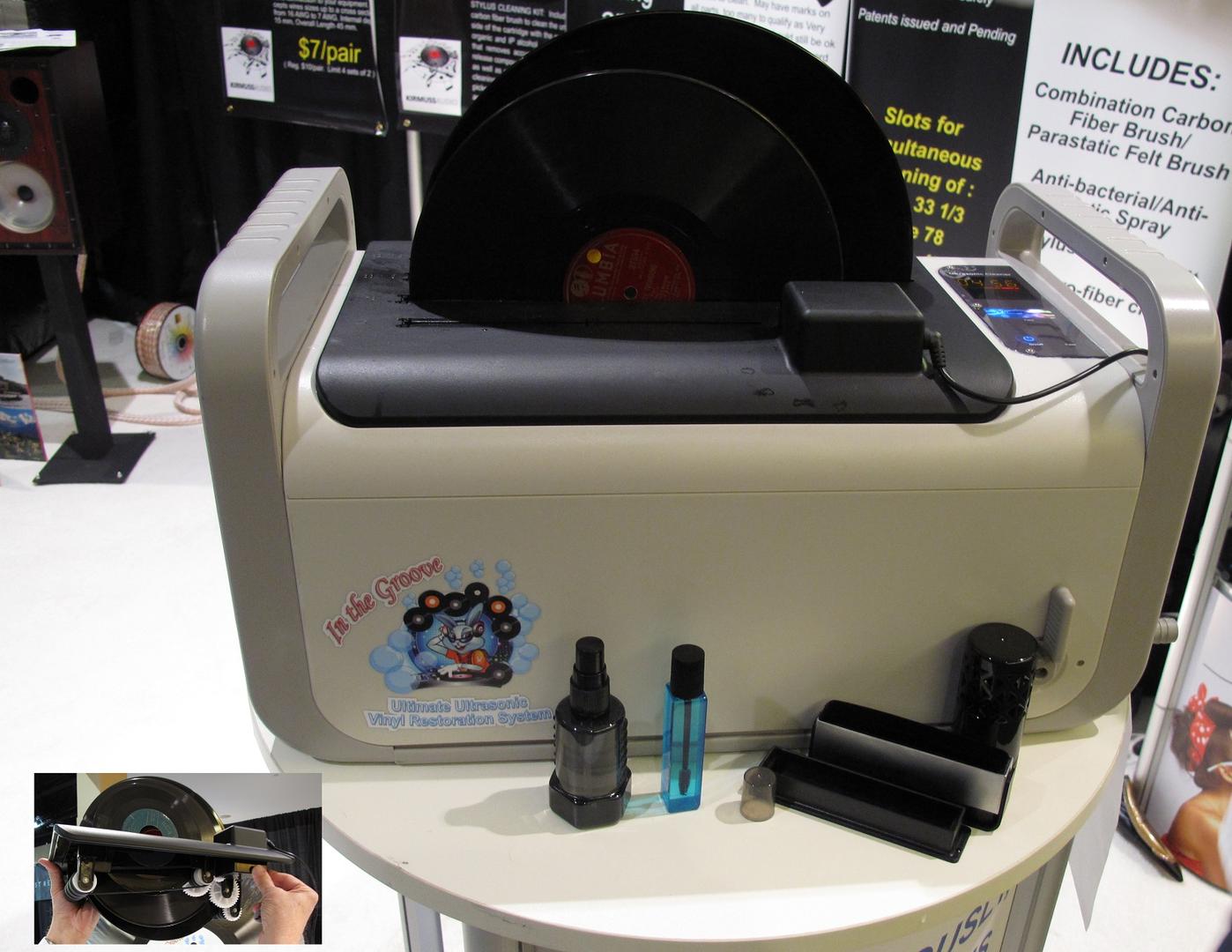 Kirmuss Audio In The Groove Ultimate Ultrasonic Vinyl Restoration System
Kirmus Audio introduced the Ultimate Ultrasonic Vinyl Restoration System record cleaner. This Ultrasonic cleaning unit features a patented four record (7″, 10″, and 2 x 12″) slot/rotation system. The user can clean all 4 records in a 5 minute time frame. Drying the record is done by hand (as suggested by Kirmuss Audio) or by other means available to the user. At $795, it’s priced quite affordably—now we’ll have to find out how well it works. 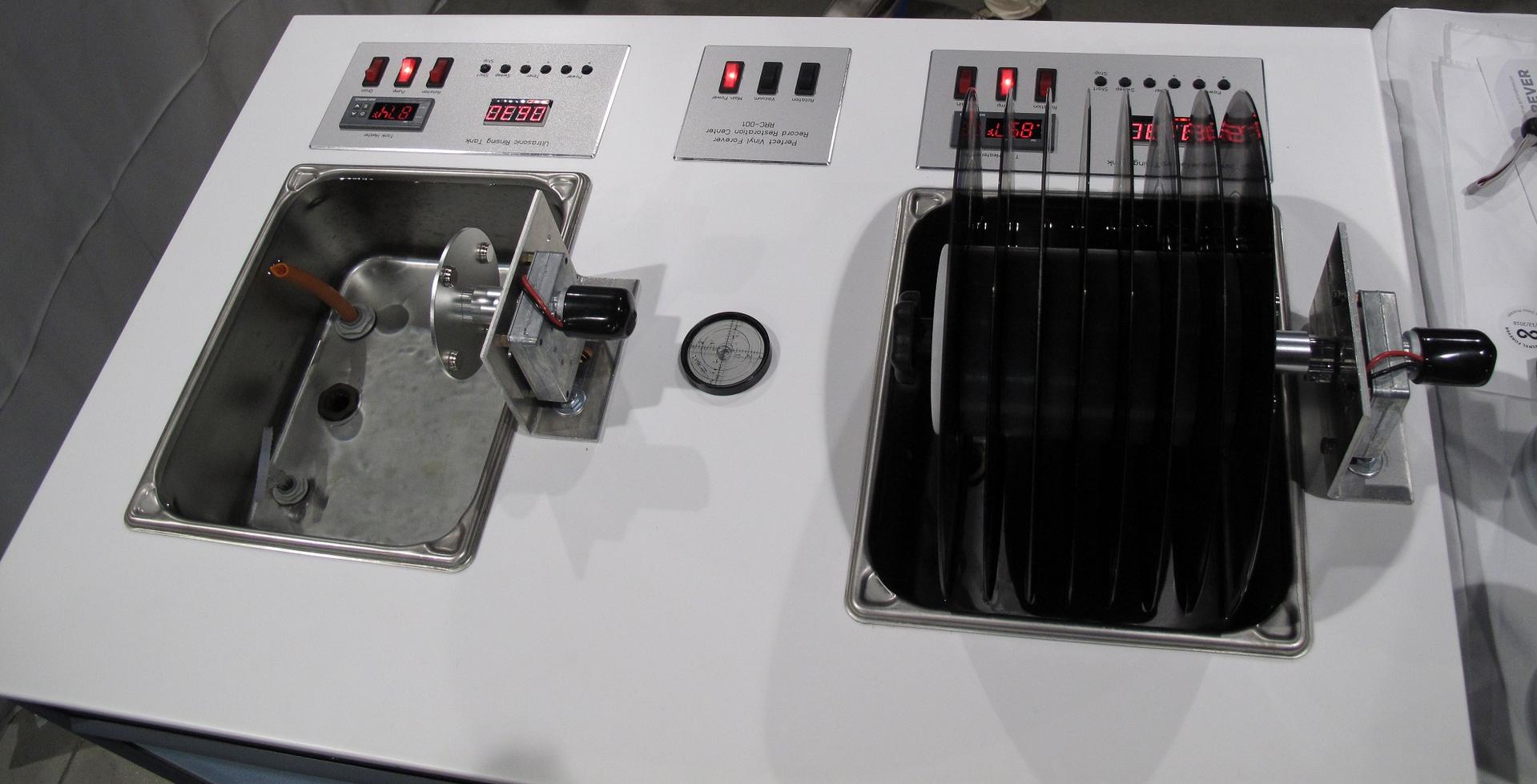 Perfect Vinyl Forever Record Cleaning Service
For those vinyl music listeners who don’t enjoy cleaning records or just want someone else to do a better job, there is Perfect Vinyl Forever. The service costs $5 (Ultra Deep Process) or $8 (Archival Process) per record for cleaning. Briefly, the difference involves additional steps with enzymatic soaking and vacuum extraction for dirty and/or used records with the archival process. Both processes involve ultrasonic deep cleaning, ultrasonic rinse, HEPA-filtered warm-air drying, and a static-free inner sleeve. There are drop-off points in certain locations around the country. The company also has prepaid and prepackaged shipping boxes (available for a fee) that are sent to your home; records can be carefully and safely placed in the application-specific packaging and mailed out for cleaning. The items are returned cleaned and ready to store or play. 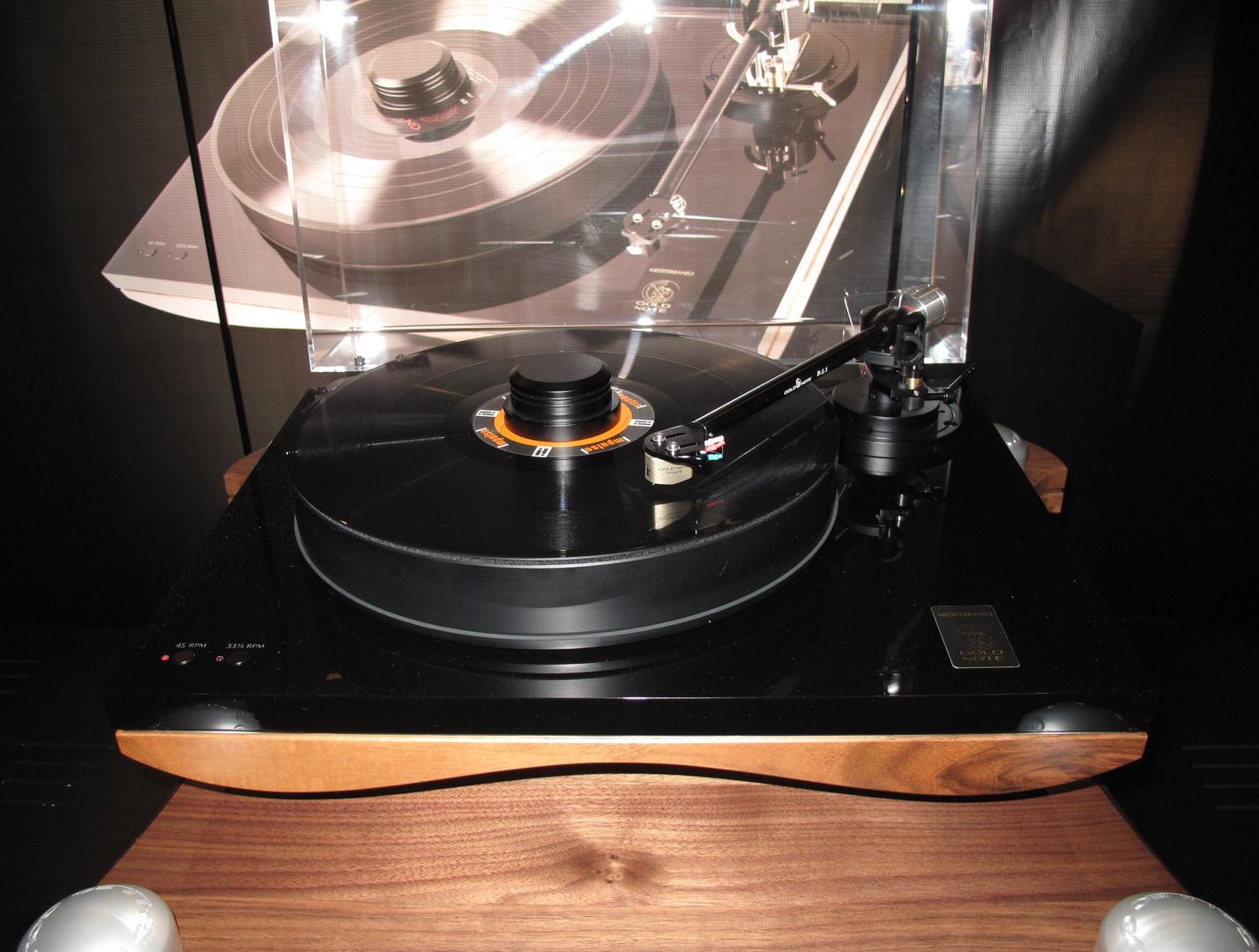 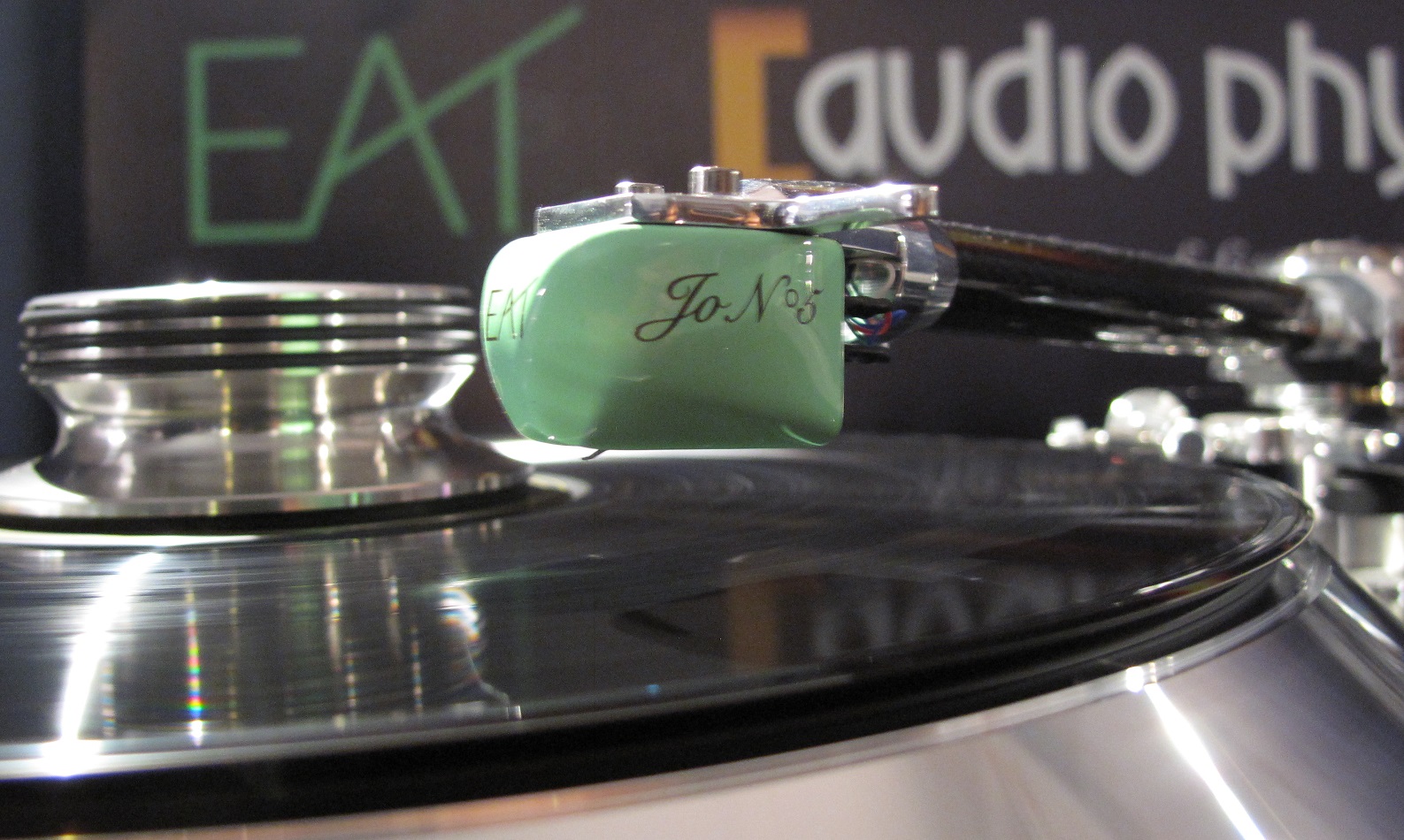 EAT Jo No.5 Moving-Coil Cartridge
European Audio Team (EAT) showcased the new Jo No.5 mc cartridge ($1495) on the C-Sharp ’table with C-Note tonearm ($2995 bundled and reviewed in TAS Issue 254). The Jo No.5 has a body made of polyamide produced using a process called Selective Layer Sintering. The cartridge weighs 15 grams, has a nude fine-line stylus, 0.3mV output, and tracks at 2.3 grams—the specs look similar to the Ortofon Quintet Bronze cartridge. The analog front end was feeding the E-Glo S hybrid tube phonostage ($2995). Both the E-Glo S and C-Sharp were powered by EAT’s new LPS dual linear power supply ($1295). The LPS delivers a fully discrete, component-designed-and-filtered 15V and 18V on separate outputs to feed the EAT turntable and phonostage. A McIntosh MC 252 integrated amplifier was used to feed Audio Physic Avanti speakers. 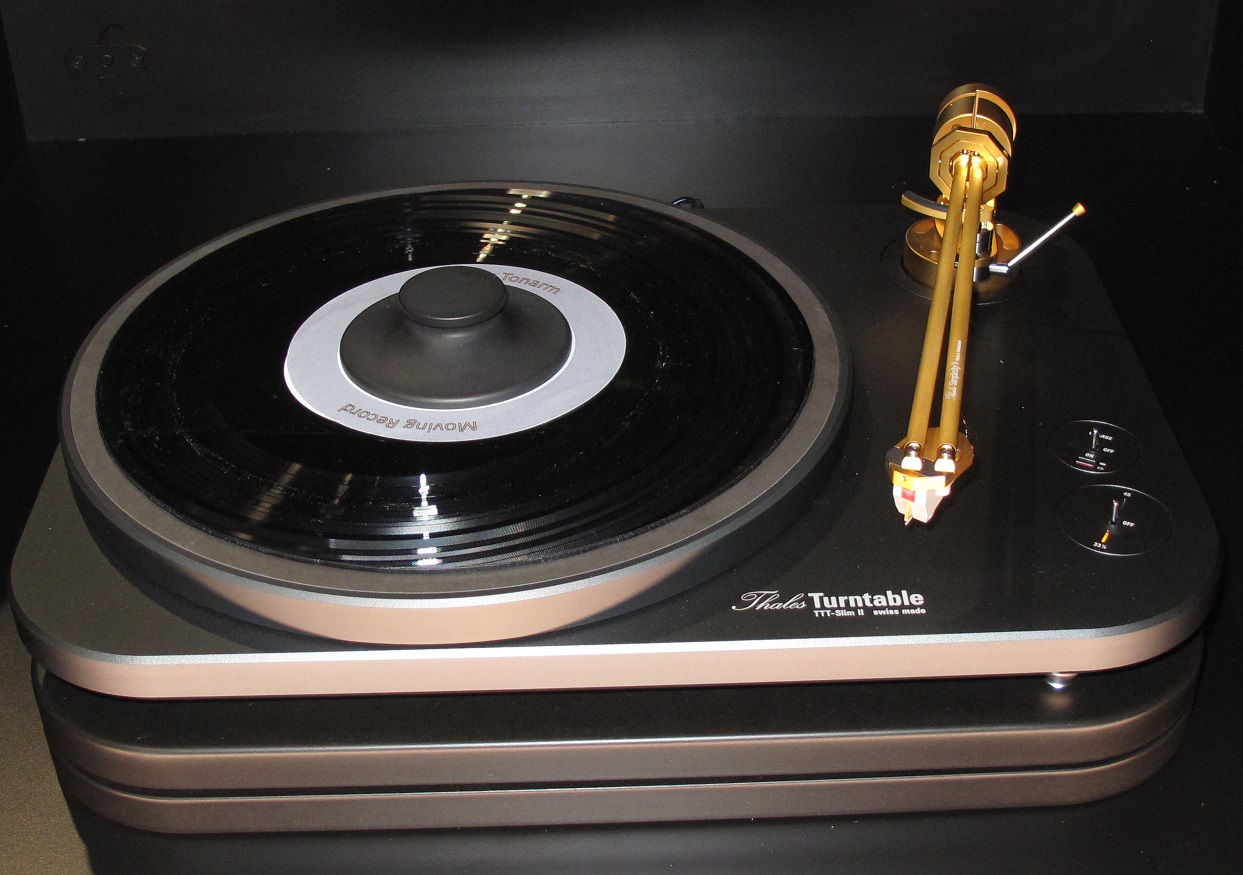 As can be seen from the listings above, AXPONA 2018 was a large show with many new (or newly introduced) analog products. To find and identify all of these components took nearly every bit of the three days of the show—so much time that there was little left for anything outside of my assignment. AXPONA 2018 is now a big show, in a new venue, with a new attitude.

Best Sound (for the money)
While I didn’t get to explore this category as much as I’d have preferred, Stereo Haven’s room 630 with Well Tempered Labs ’table/cartridge, Line Magnetic, Box Furniture, Isotek, Auditorium, and Falcon Acoustics produced good sound.

Most Significant Trend
AXPONA is growing and getting bigger.

Most Coveted Product
That would be an exceptionally good DAC to stream Tidal and play quad-DSD plus PCM up to DXD, when I’m not listening to vinyl or tapes. 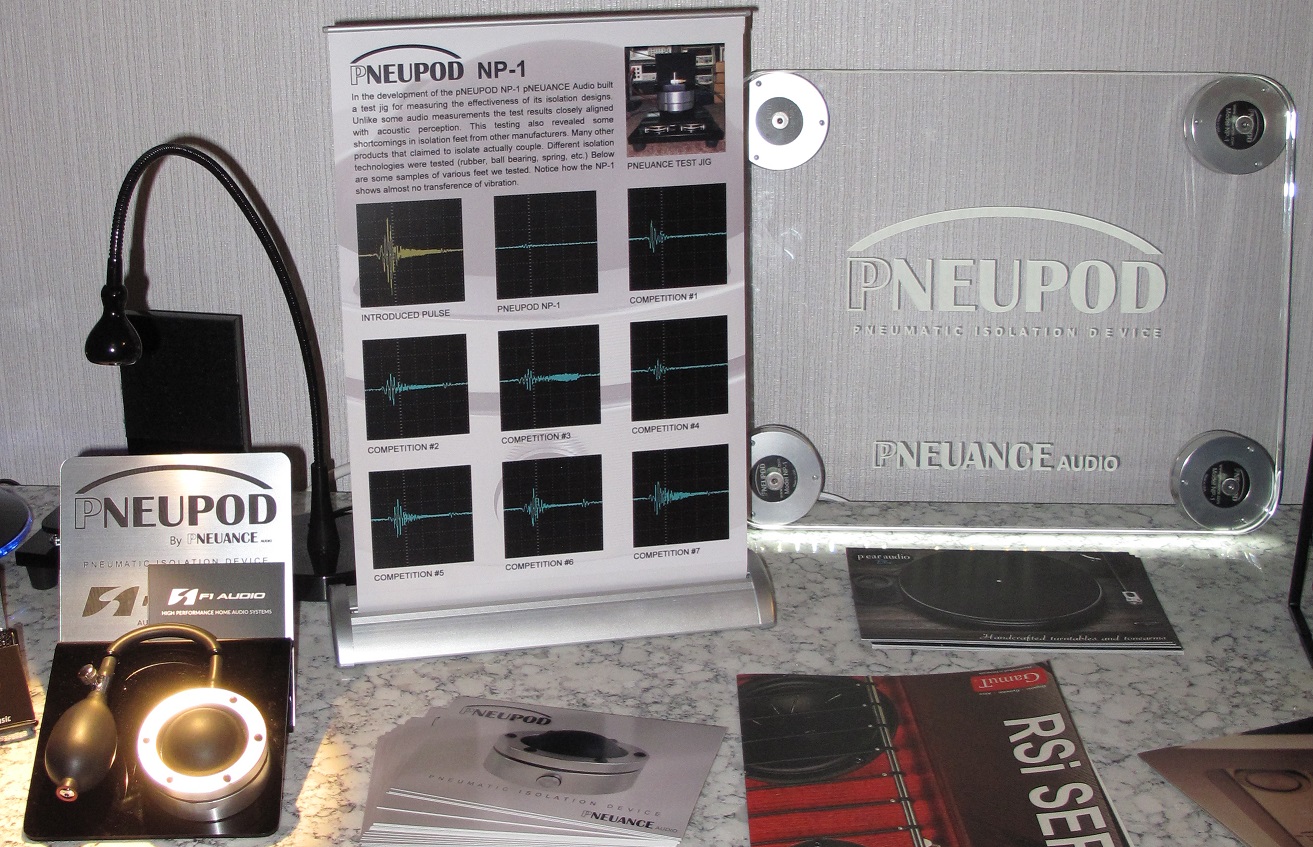 Pneuance Audio introduced an effective pneumatic isolation device called the Pneupod NP-1 ($949 for a set of three and $1195 for a set of four). Each NP-1 can sustain a maximum weight of 20 pounds (60 pounds for set of 3 and 80 pounds for a set of four). Based on the use of air compression within a rubber diaphragm, the Pneupod NP-1 decouples the component or shelf that rests above the device. This approach is different from other types of coupling devices that are designed to drain energy away from (or in some cases, into) the component. Which approach is ultimately preferred is usually up to the user—which we can’t really debate or discuss. A system utilizing Pneupod NP-1 devices (along with a prototype Pneupod shelf and equipment stand) was on display at AXPONA. The accompanying electronics were from Gamut, Pear Audio Blue, My Sonic Labs, Levin Design, Aurender, and Bricasti design. What I can say is the units worked exceptionally well in the setup. A direct demonstration with just one component showed the effectiveness of the Pneupod NP-1. That component was the Bricasti DAC. The Bricasti had four Pneupod NP-1 devices under it. The NP-1s were deflated (although not removed from the DAC for demo purposes; this could be done in a more rigorous comparison) and the hosts played a song (“Too Young” performed by John Lee Hooker from the Chill Out album). After a short period of listening, the host reinflated the NP-1s and the song was played again. The results under the Bricasti DAC were immediate and pretty obvious. The most noticeable was the electronic decay on vocals and guitar coupled with a higher level or clarity that seemed to add more vibrancy and delicacy to the performance.