Follow the vacuum tube. My show assignment pointed me squarely onto a path jam-packed with tubular delights. To borrow EveAnna Manley’s favorite phrase: “tubes ruled” this year. Almost every tube-laden room at RMAF turned out to approach a musical “Rocky Mountain High.” A special treat was provided by several 845-based single-ended designs. I don’t know about you, but I find the white light of thoriated-tungsten filaments to be absolutely majestic. In the 1920s, it was discovered that, for a given operating temperature, treating tungsten with 1 to 2 percent of thorium dioxide would multiply the electron emission by several orders of magnitude. No reddish glow; the 845 lights up much like a light bulb. 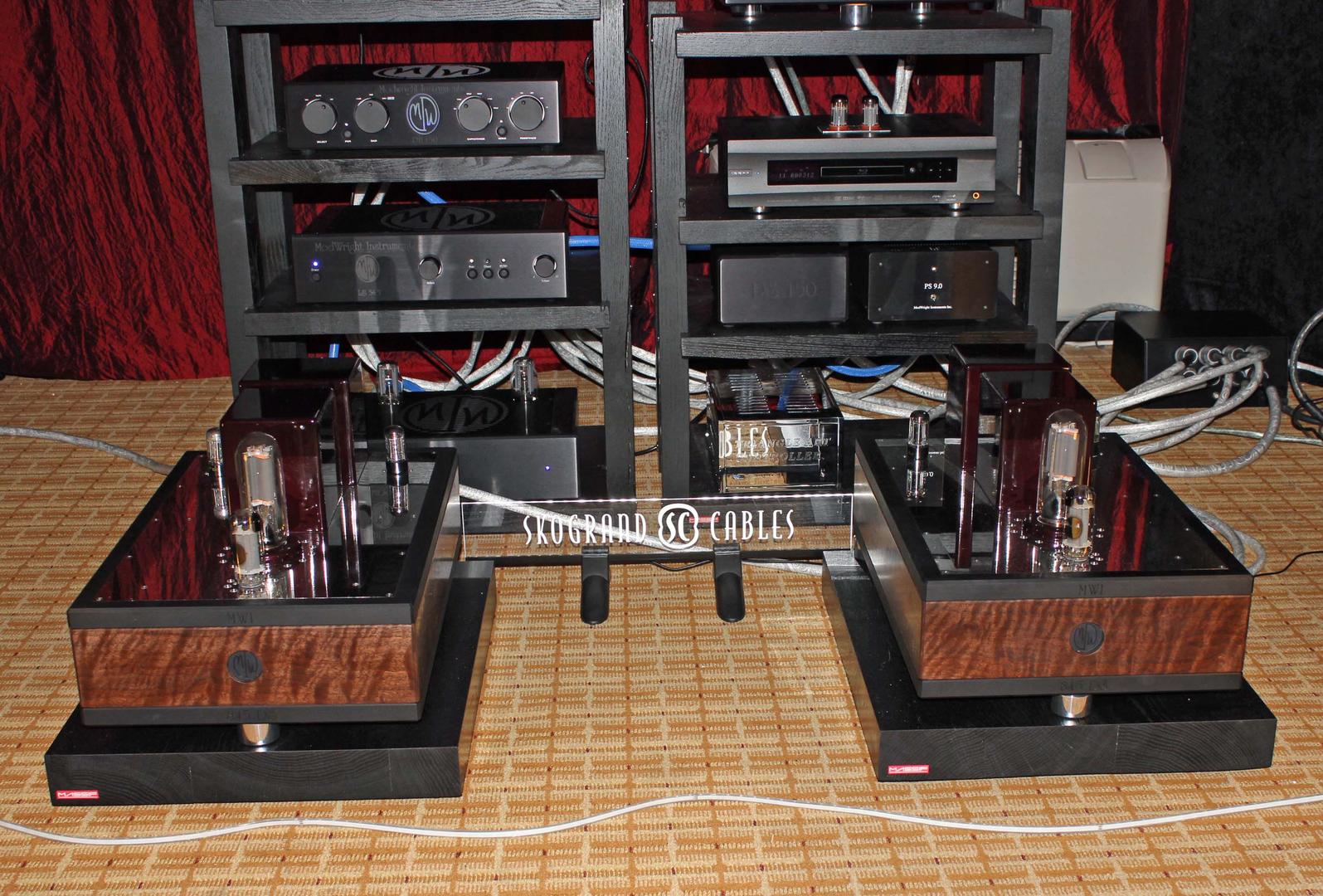 ModWright 845 DS Single-Ended Triode (SET) Monoblock Amplifier (circa $50,000)
The world début of the ModWright 845 DS SET 845-based monoblock amplifier was nothing short of breathtaking. Surprisingly, only a single gain stage is used, a 6HV5 compactron that was designed for pulse-type voltage regulation in color TVs. This is a unique tube featuring grid-frame construction, a bonded cathode, a peak plate rating of 5500V, and enormous transconductance. The 6HV5 is coupled to the 845-output tube via a 2000V-rated oil capacitor. The rail voltage for both tubes is 1200V, which is the maximum for the 845 but not really enough to make the 6HV5 wince. Properly biased, this tube combination delivers 32 watts at low distortion, eclipsing the power delivery of conventional 845-based SET designs. I auditioned the 845 DS in the context of two systems, partnered by the Endeavor E-5 and Daedalus Poseidon V2 loudspeakers. In both cases, I found it to excel in the projection of a recording’s acoustic space. It is also one of the few 845 designs that does not overwhelm an audio system with an overly liquid presentation. 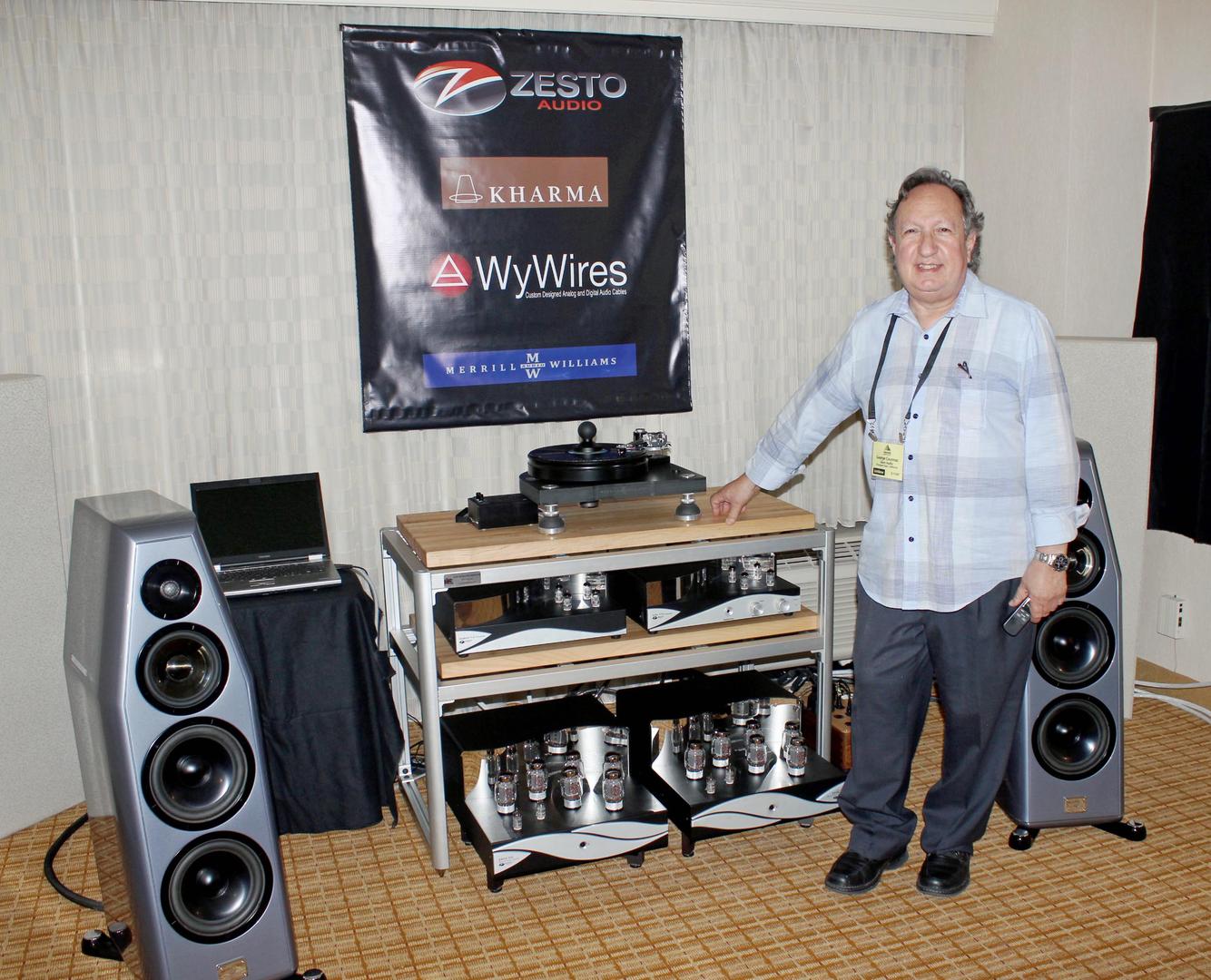 Zesto Audio Eros 300 Class A Monoblock Power Amplifier ($19,900)
Push-pull power amplifiers are commonly differentiated on the basis of the output stage biasing. Most fall into Class AB. McIntosh Lab used its unity-coupled output stage in the 1950s to get away with Class B biasing. Zesto designer George Counnas took the high road; the Eros 300 is said to deliver 150 pure Class A watts from a matched sextet of KT88s. The input, phase splitter, and driver stages are configured using a pair of 12AU7 dual triodes. The design was optimized not only by using sophisticated circuit emulation software but also by inserting the ear into the final voicing process. Why not use the newer KT20 or KT150 beam power tubes? George refuses to be tied down to a single production source and opted instead for the commonly available KT88. The Eros is outfitted with JJ Electronic tubes, the pride of the Slovak Republic. 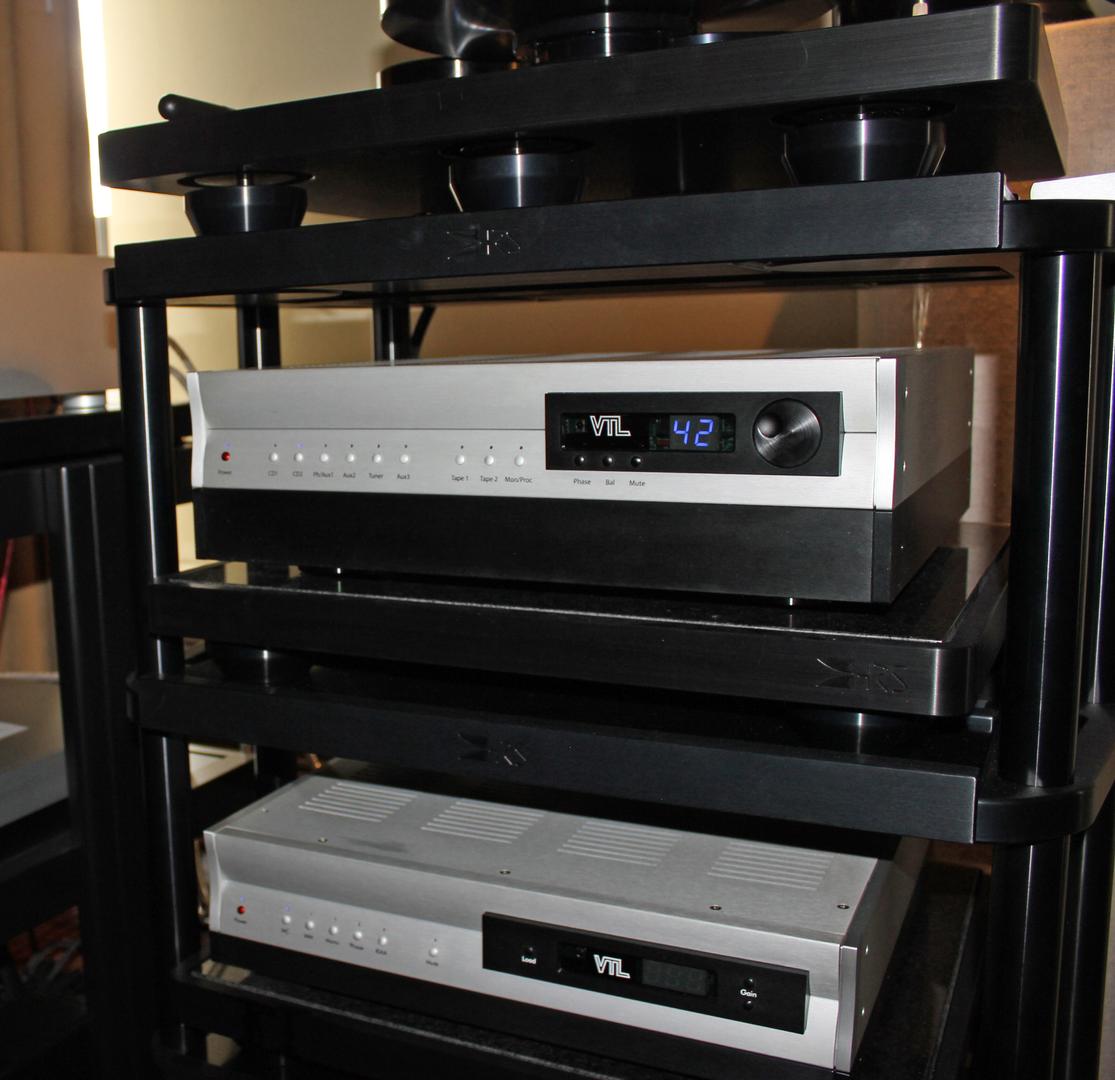 VTL TL-6.5 Series II Signature Linestage Preamplifier ($15,000)
The VTL TL-6.5 Series II is a significantly revised version of the original TL-6.5 introduced over seven years ago, and in essence, represents a one-box incarnation of the flagship TL-7.5 Series III Reference preamp. It incorporates various circuit improvements and much of the TL-7.5’s technology. An extensively revised power supply features a shunt regulator for improved rejection of AC line noise. The aim has been to nudge the sound closer to a tube-like character. The linestage was partnered by the TP-6.5 phonostage, MB-185 Series III monoblock amplifiers outfitted with reissue KT77s, Brinkmann Spyder turntable with Lyra Etna cartridge, dCS Rossini CD player and clock, Nordost Odin 2 cables, and Wilson Audio’s Sabrina loudspeaker. This system managed to accommodate vinyl playback with exceptional finesse. 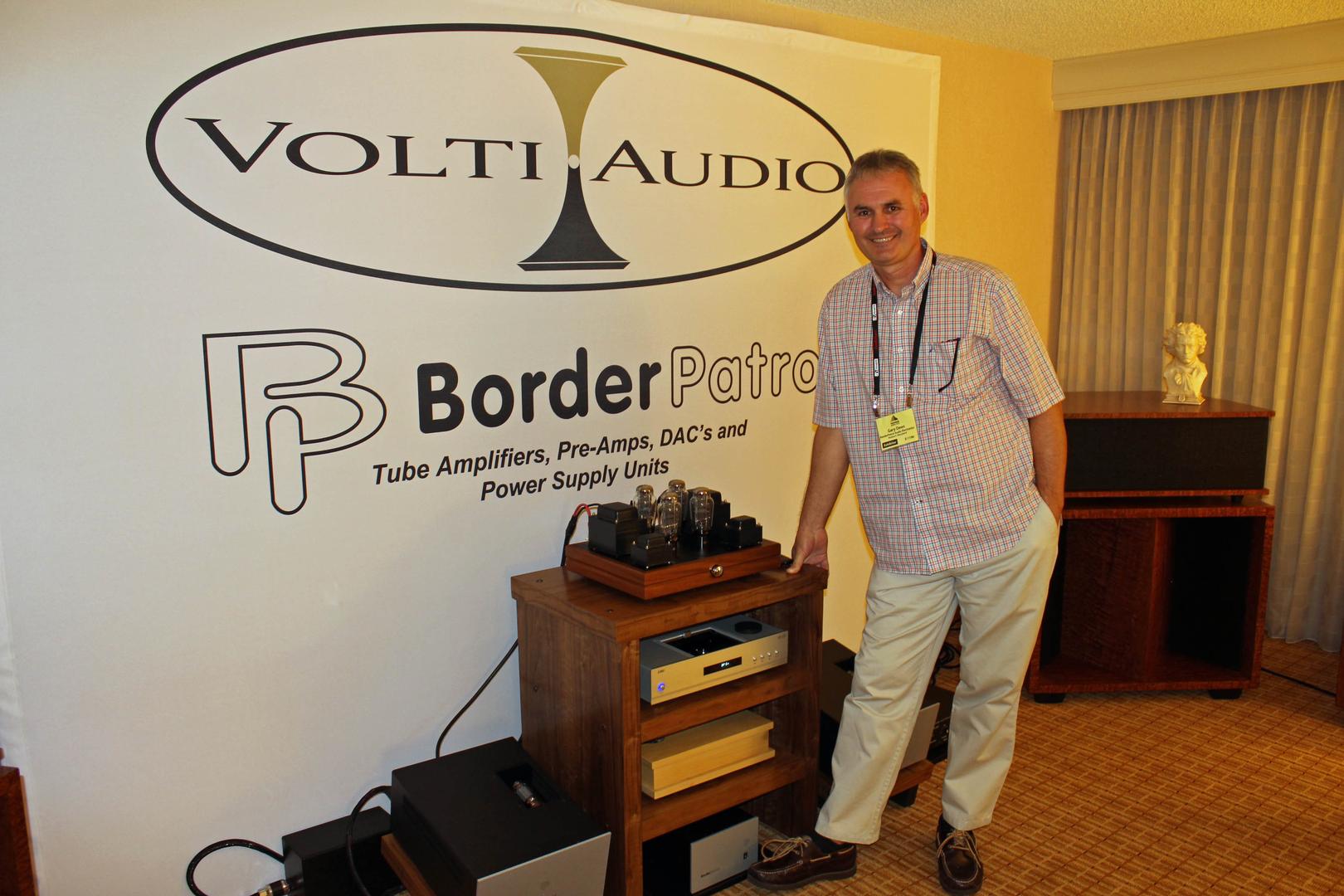 BorderPatrol S20 EXD+EXS SET Stereo Power Amplifier ($25,750)
OK, so this isn’t really a new product introduction, but I was so blown away by the BorderPatrol S20’s performance with Volti Audio’s Vittora speaker system that I just had to include it here. Two 300B power triodes are paralleled per channel to deliver 18Wpc. The overall layout is dual mono. Massive dual external power supplies are used. Designer Gary Dews offers several power supply options with the EXC+EXS representing the ultimate configuration—weighing in at 90 pounds each in copper casework and extensive cryogenic treatments. The rest of the setup in the Volti Audio room included BorderPatrol’s DAC1, CEC TL3N belt drive CD transport, and Triode Wire Labs. A gem of a system. 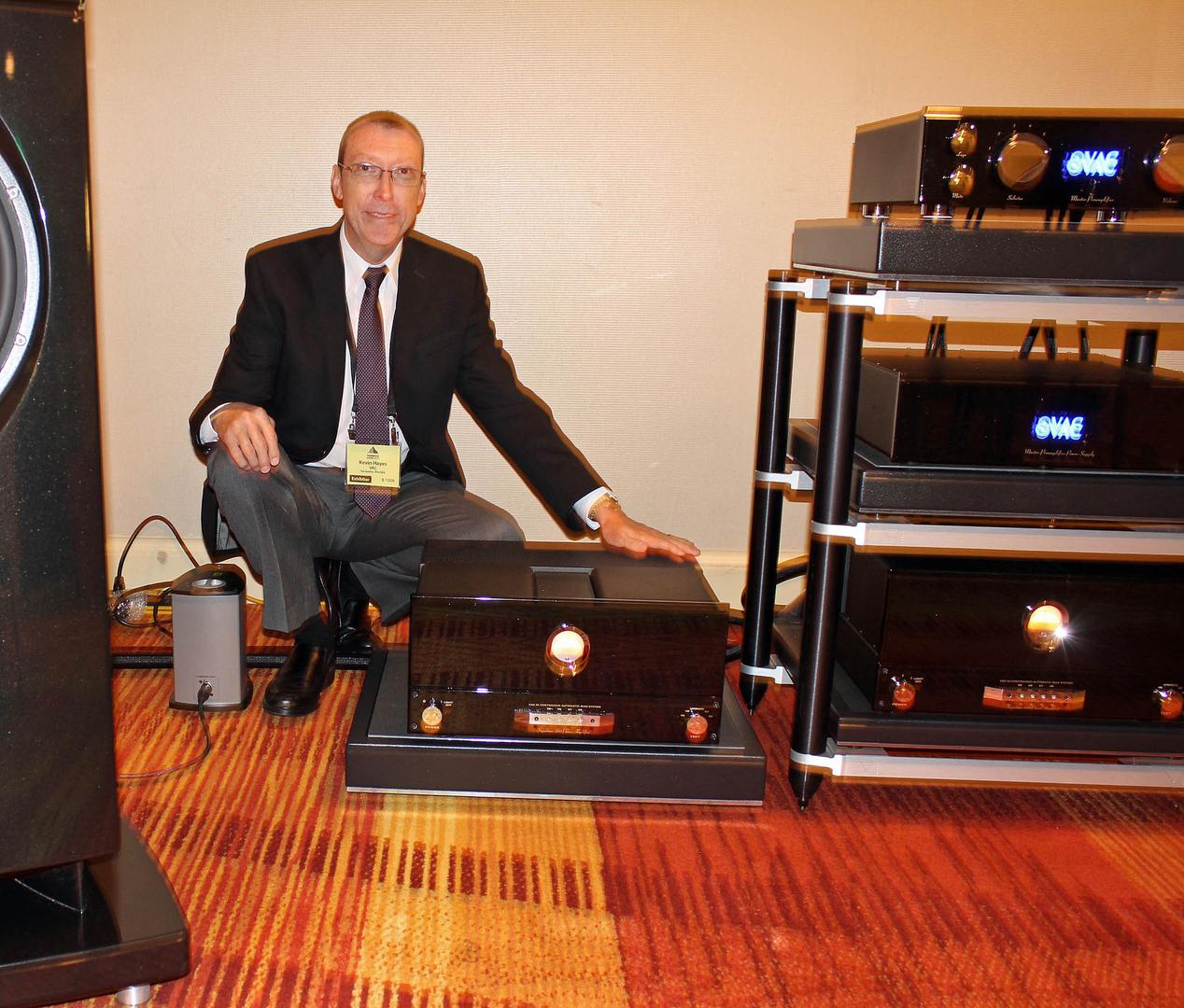 VAC Signature 200 iQ Power Amplifier ($14,000) & VAC Master Preamplifier Mk II
VAC iQ amplifiers are innately intelligent, at least to the point of holding the idle current of each power tube fixed regardless of how softly or loudly the music is playing. The payoff is far less distortion under dynamic drive conditions. The new VAC Signature 200 iQ offers this technology at a much more affordable price point. Power delivery is 100Wpc in stereo and 200 watts in mono mode. The new VAC Master Preamplifier Mk II features a new power supply with four power transformers and captures the essential parts and circuitry of the $156,000 Statement preamp ($41K with phono; $27K without). Four Signature 200 iQ amps operating in mono mode did a terrific job driving the Focal Grande Utopia EM loudspeakers. Sources were the TransRotor Orion with SME ’arm and Air Tight PC1 Supreme cartridge, and Accuphase 720 SACD player. 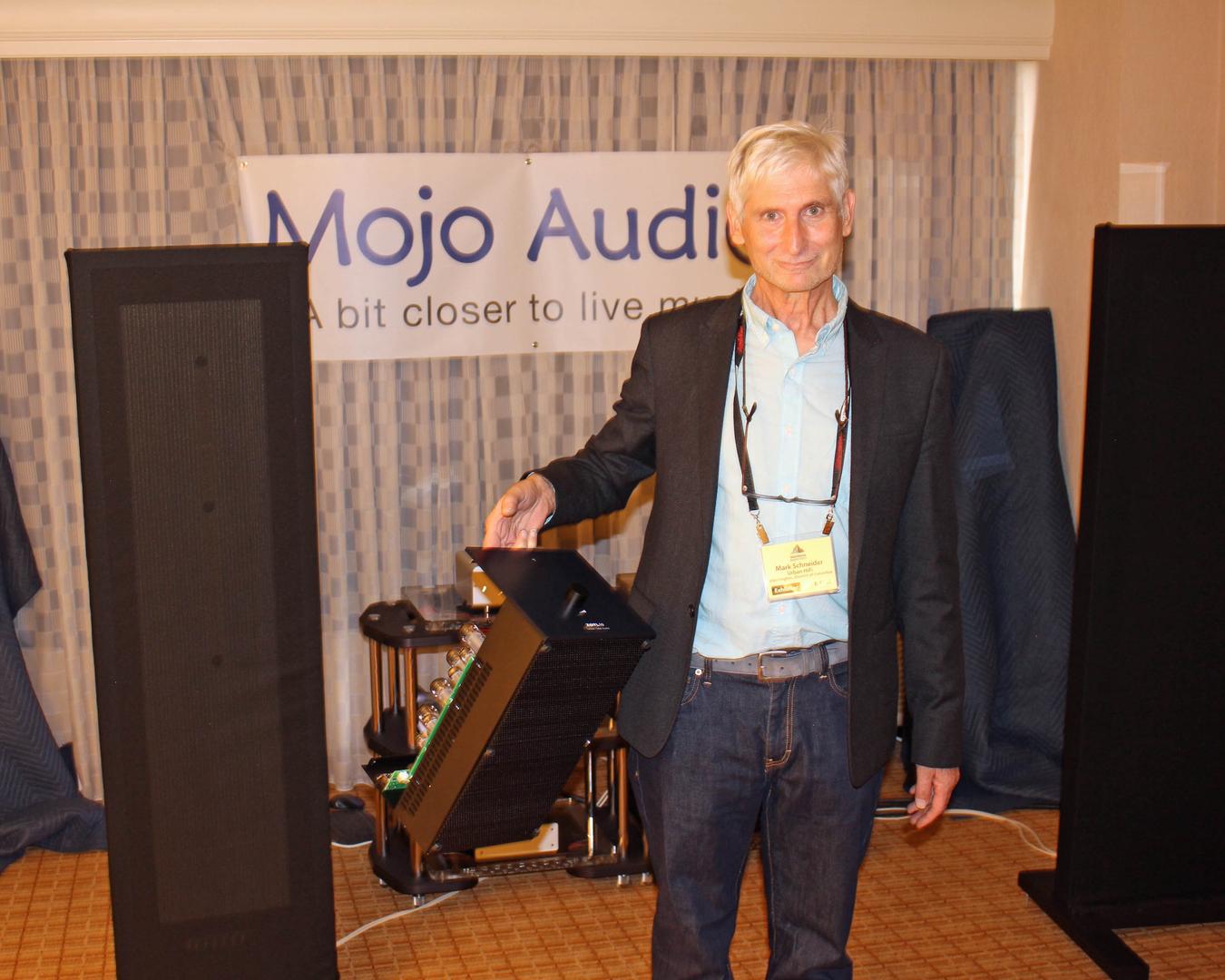 Linear Tube Audio microZOTL 2.0 Personal Amplifier/Preamplifier ($1100) & Berning ZOTL40 Stereo Power Amplifier ($4500)
Distributed by Urban HiFi, Linear Tube Audio’s online distribution arm, the micrZOTL2.0 is a licensed re-issue of the Berning design that I reviewed some 15 years ago. The internal circuitry is identical to that of the original. The microZOTL 2.0 (review pending) has been touted for some time now as an excellent headphone amplifier, but what about using it as a preamp? With two selectable line-level inputs and a volume pot, it looks much like a linestage. That was my first instinct and also that of Mojo Audio’s Benjamin Zwickel. In the Mojo Audio room, the microZOTL was driving David Berning’s latest power amp design for Linear Tube Audio, the ZOTL40, featuring an EL34-based push-pull output stage operating in Class AB and delivering 40Wpc. The absence of a conventional output transformer makes the ZOTL40 a lightweight, as Urban HiFi’s Mark Schneider demonstrated by dangling the amp on his fingertips. The partnering loudspeaker was Zwickel’s personal Magnepan 1.7, and much to my surprise this coupling performed quite well. I should add that Mojo Audio now offers a power supply upgrade for the microZOTL (though it costs almost as much as the microZOTL itself). 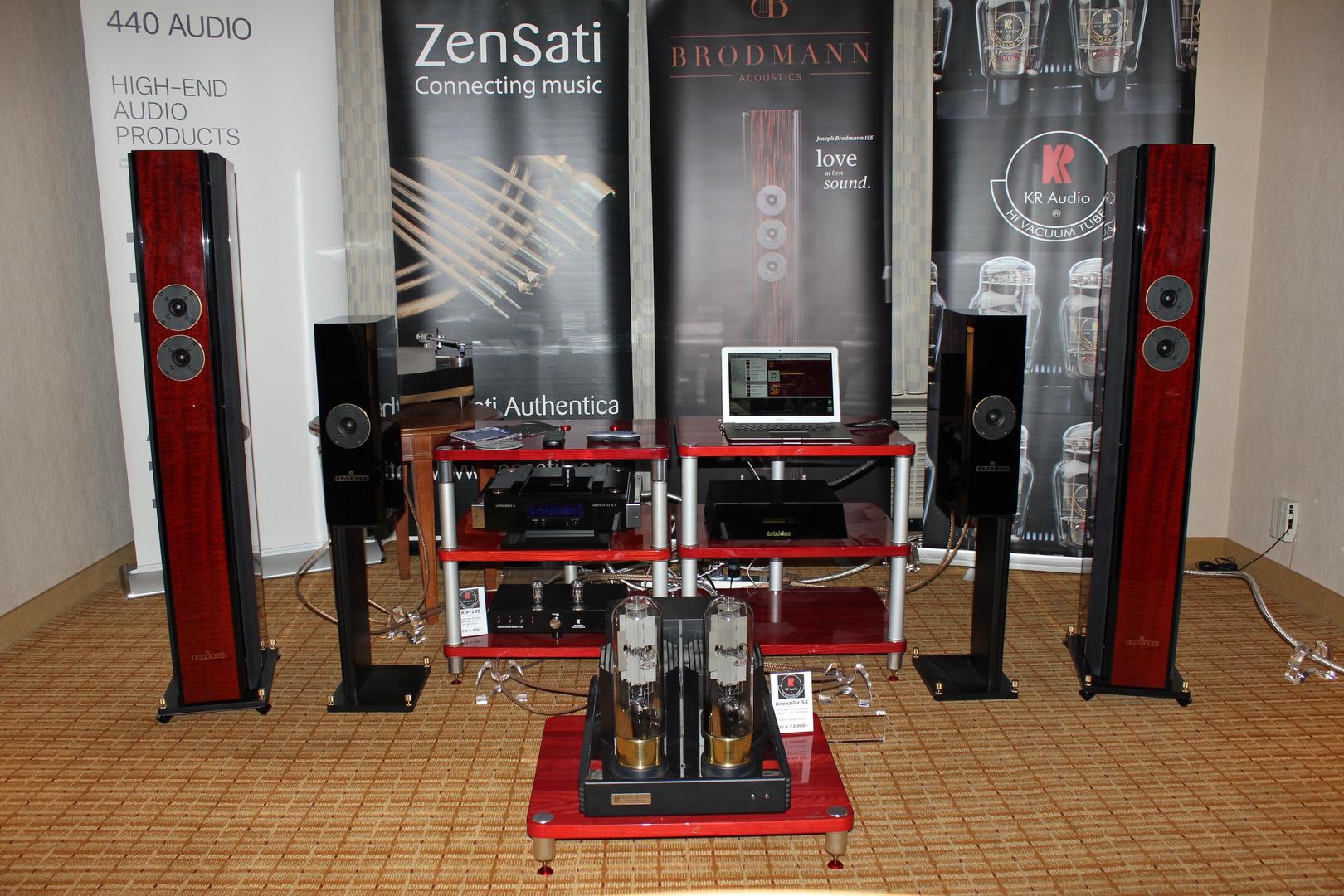 The Kronzilla SX stereo amp ($23,000) was spotted doing its thing in the Brodmann Acoustics room. Any close encounter with KR Audio’s Kronzilla is worth writing home about, that KR 1610 power triode “on steroids” being quite a sight. Two other manufacturers introduced noteworthy SET amplifiers. The Voxativ 845 monoblock amplifier ($17,500) is a flagship product rated at 18 watts into 4, 8, and 16-ohm loads. The Lampizator 211 SET monoblock amplifier delivers 20 watts and incorporates a volume control which for some applications would obviate the need for a preamplifier. Purity Audio Design’s Reference Series II linestage is a single-chassis affair that takes the same Class A circuit used in the maker’s Ultra and Statement series and includes refinements such as ClarityCap MR caps and silver autoformer attenuators as used in the Statement. 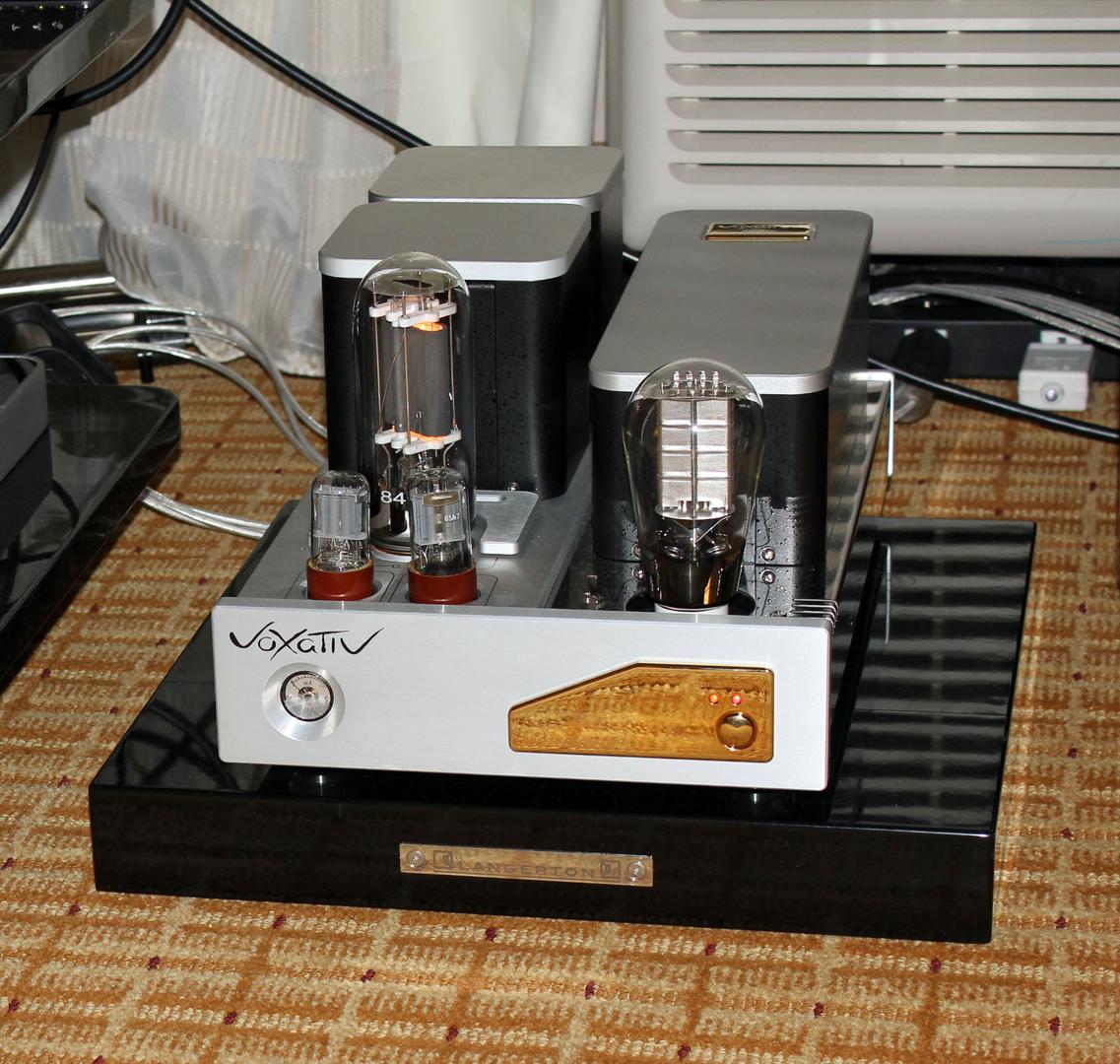 Best Sound (For the Money)
Mojo Audio’s system consisting of the Magnepan 1.7 loudspeaker with associated microZOTL 2.0 (used as a preamp) and Berning ZOTL40 power amp.

Most Significant Trend
Vinyl front ends holding their own sonically in an increasingly sophisticated digital world. Kudos to the Zesto Audio team for their strictly vinyl demo.

The 30 Greatest Bargains in High-End Audio