You can read part 1 of this report here. 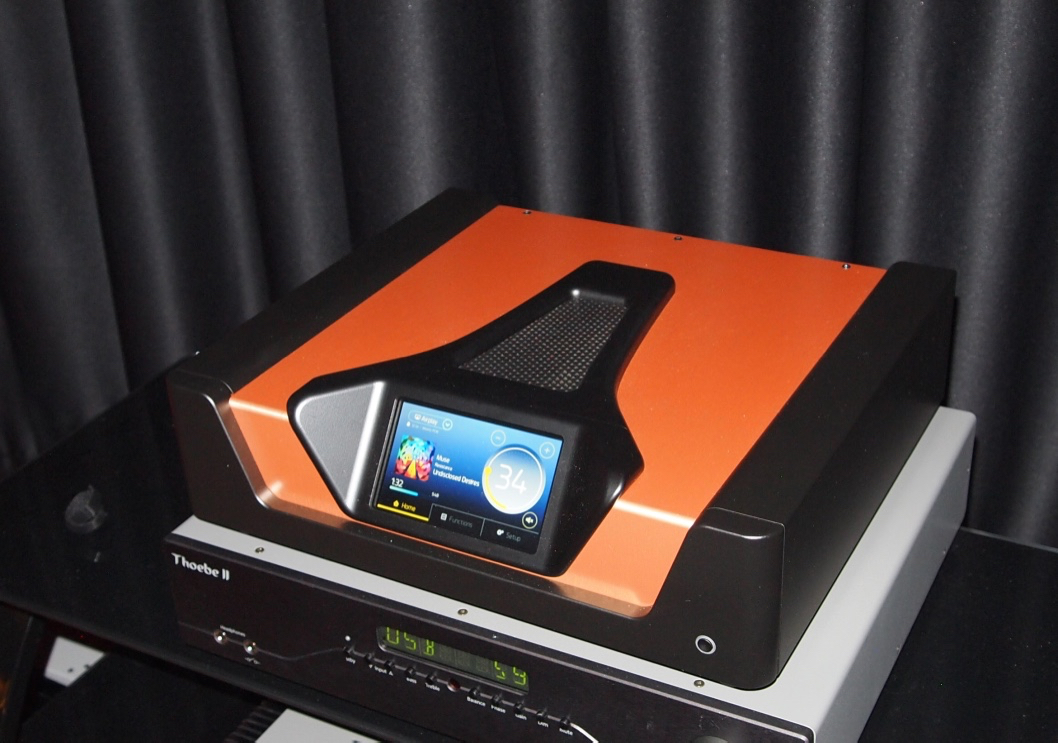 Wyred 4 Sound Statement Series: $TBD
Wyred 4 Sound is ramping up production on its Statement Series amplifier and preamp. The preamp—equipped with a high-resolution DAC—is a modular design and will be capable of online updating via Ethernet. The Statement amplifier employs Wyred’s proprietary Class D circuitry bolstered by a massive transformer. They will both feature vivid and comprehensive color touchscreens to handle routine operations and optimize connectivity. The pricing is still to be determined but we’re told to expect something in the $3000-$4000 range each. 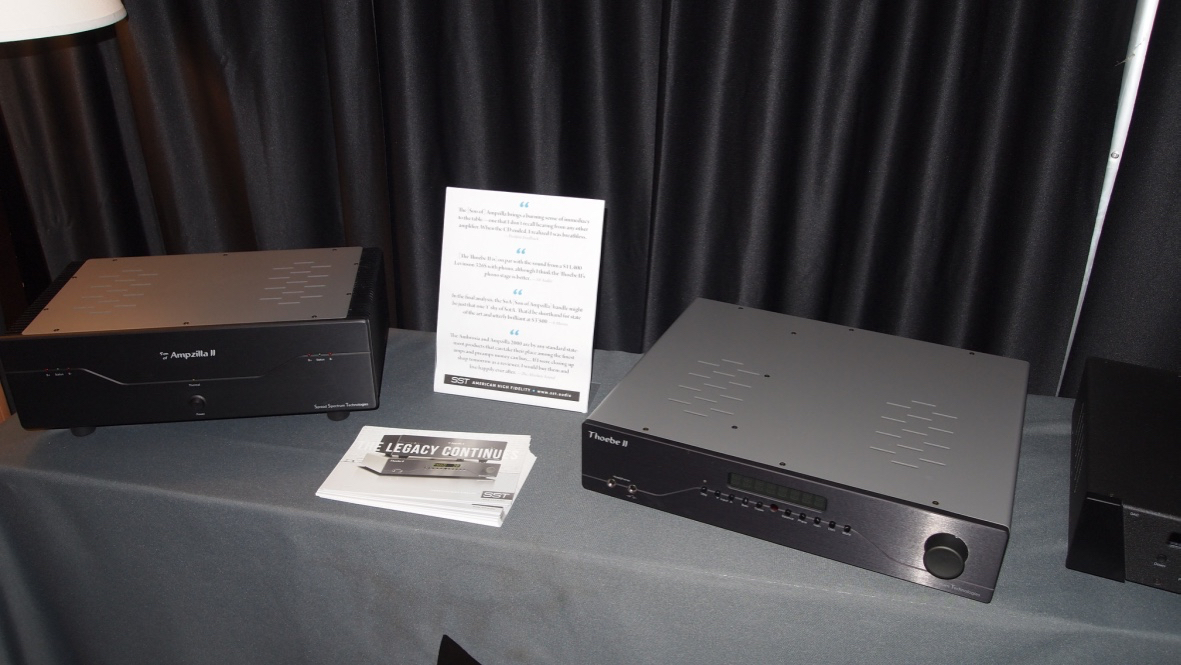 Spread Spectrum Technologies Thoebe II and Son of Ampzilla: $3000 each
In the Wyred 4 Sound room, I also caught a glimpse of the relaunched Spread Spectrum Technologies’ Thoebe II preamplifier and the 200Wpc Son of Ampzilla II amplifier ($3000 each). Embodying a classic, bygone look, the preamp’s key features include a highly transparent volume control, bass and treble controls, high/low gain settings, and a top-notch headphone amplifier. Additionally, the Thoebe II can be configured with available add-on options such as a reference-level DAC, or phonostage. Son of Ampzilla offers the same power supply capacity as SST’s flagship amplifier, the Ampzilla 2000 Second Edition. Look for Paul Seydor’s full review of this pair in a forthcoming issue.

Technics R1 System: $54,000
Technics has returned to the high end in a big way with a system determined to create a halo effect throughout its line. Its R1 System features the SE-R1 stereo amp ($18,000), a tech-heavy, hybrid Class D, dual-mono design delivering 100Wpc. It uses a linear power supply that feeds a proprietary jitter reduction circuit and PWM modulator. Technics notes that switching noise has been placed way out of the audio bandwidth from nearly DC to 100kHz. Its LAPC (Load Adaptive Phase Calibration) System measures impedance of speakers and corrects phase anomalies to avoid upper frequency phase issues. Technics fleshes out the system with the SU-R1 Network Audio Control player ($9000) and the SB-R1 Reference speakers ($27,000/pr). 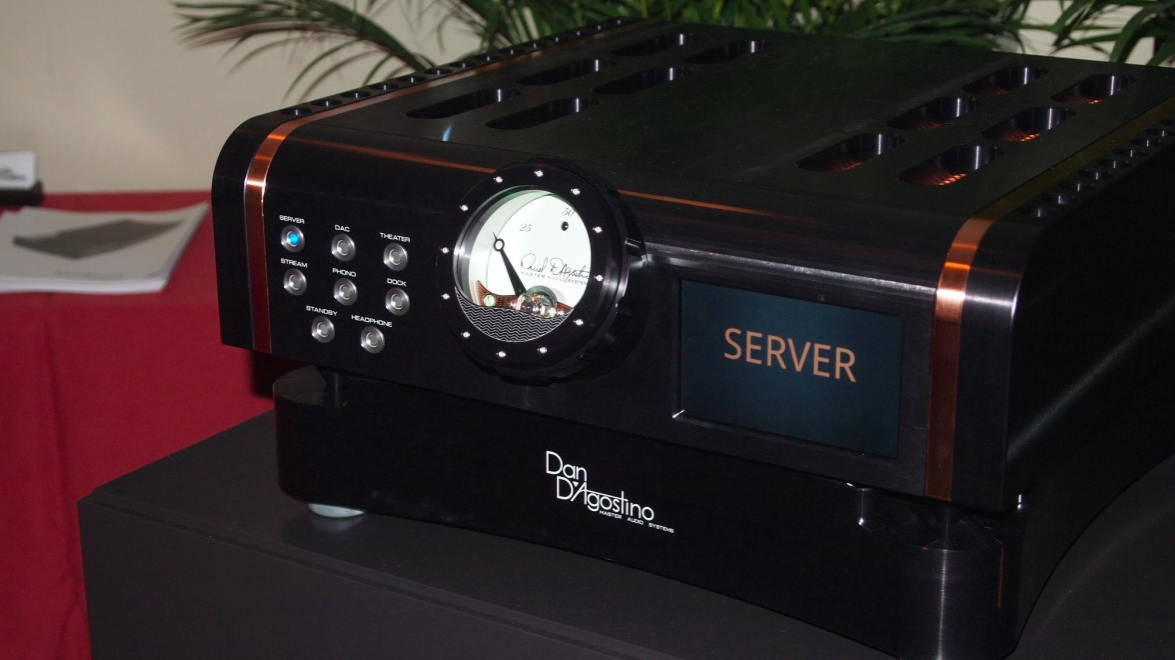 D’Agostino Momentum MLife: $49,900
RMAF was a big show for D’Agostino in the Audio Alternative room. Not only was the new and sumptuous Momentum phonostage in action, but I also did a double-take when I spotted the D’Agostino Momentum MLife integrated amplifier as I was exiting. Like the Momentum integrated, it uses the same 200Wpc amplifier and preamp circuitry but adds a 24/192 DAC, a jumbo five-inch LCD display, Ethernet and wireless connectivity, and an available customized control app for virtually all functions, as well as selections and metadata. Beyond gorgeous.

Benchmark AHB2: $2995
The new, low-profile compact amp from Benchmark is touted as the ideal answer for high-resolution digital formats with dynamic headroom, a very wide bandwidth (up to 20kHz), damping, and resolution. Benchmark teamed up with titan THX to eliminate typical Class AB crossover distortion by using a pair of technologies that THX has recently patented. Output is 100Wpc into 8 ohms and up to 380W in bridge mode. The AHB moniker is named after Benchmark founder Allen H. Burdick who passed away in 2013. Look for Paul Seydor’s upcoming review.

Audio Alchemy Series
The Audio Salon of Santa Monica demonstrated that the new, slim-line electronics from Audio Alchemy are not just crowd-pleasers with blue-plate loudspeakers such as the Elac F5, but also have the bonafides to match the sonics and lucidity of the likes of the Wilson Sabrina. Audio Alchemy’s lineup includes the versatile DDP-1—a preamp/DAC/headphone amp, basically an all-analog four-in-one with DSD-compatible DACs ($1995). Furthering performance and dynamics is the robust PS-5 outboard dual power supply: one analog, one digital in a single box ($595). In the power department, there was a pair of the DPA-1 digital monoblock amps ($1995/each) with a Class A input stage and Class D output. These will be the subject of a forthcoming review by Robert Harley.

Elac will release an integrated amp—slated for an end-of-year introduction—bundled with a USB/DAC and 150Wpc of Class AB BASH power. It will be equipped with its own control app, an OLED display, and a sub output, and will feature similar room correction DSP as Elac’s newly released subwoofers to allow for a seamless blend of sub and sat. Look for a retail price between $500-$600. 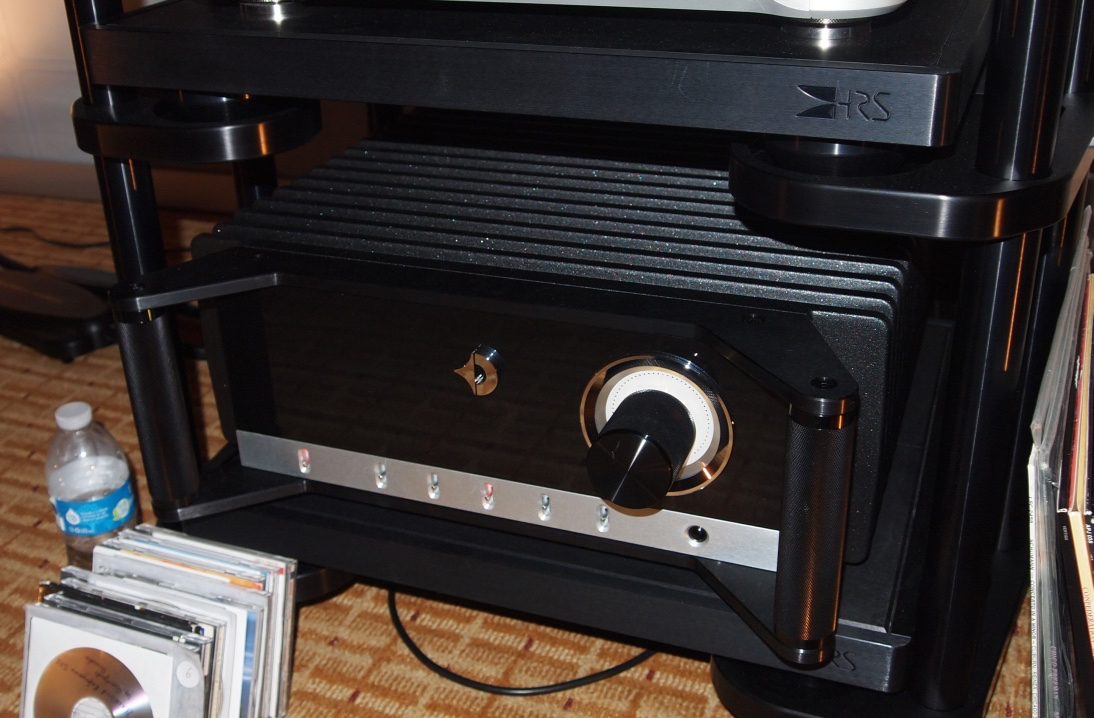 As it was placed at the bottom of an equipment rack, I barely caught a glimpse of the Avantgarde XD series XA integrated, $18,800. Within its heavily isolated aluminum chassis is a zero-feedback amp that offers 120Wpc into 4 ohms with five inputs including two balanced XLR. More interestingly, with 1.1W of Class A power, there’s just enough pure Class A juice to power some of Avantgarde’s ultra-sensitive horn-equipped loudspeakers.

Sources say that Esoteric is due to refresh its mid-line series of preamps and amp and are plotting an aggressive road map for the future. Also, Jeff Rowland is working with Thomas Holm of Holm Acoustics on an all-out assault on the state of the art in phonostages. No word on the timeframe, but insiders promise it will be something special. 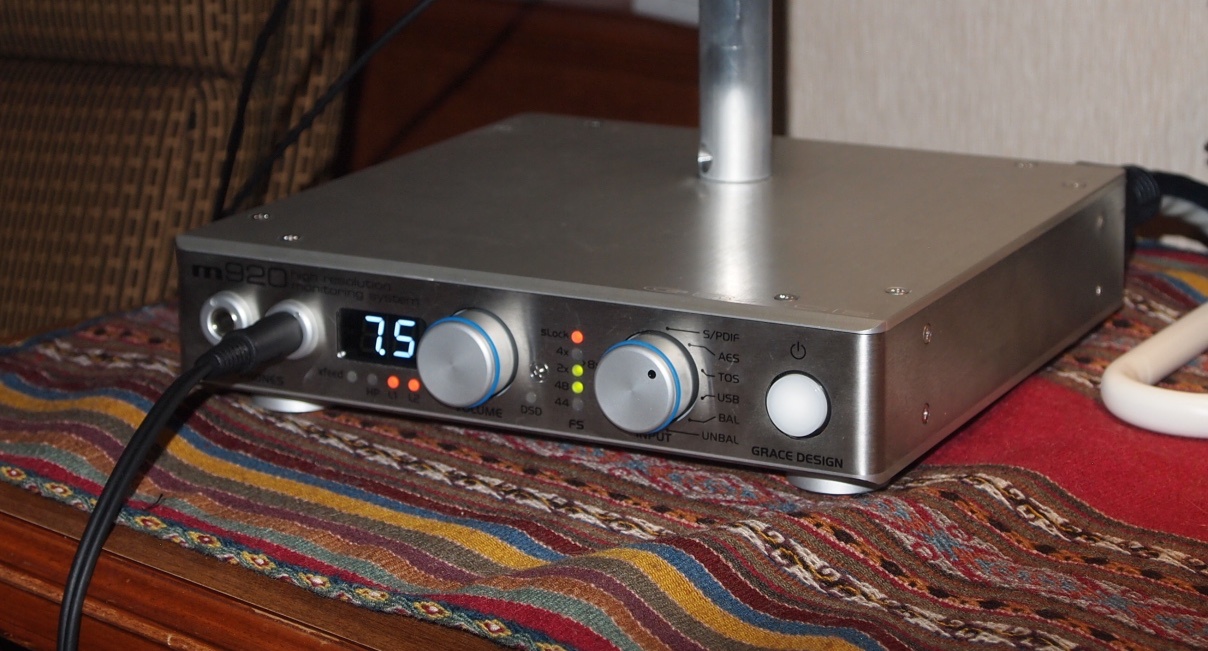 The Grace Design m920 is the Colorado firm’s compact high-resolution monitoring system ($1995) that will drive an amplifier, two sets of headphones (even the low-impedance variety), and a set of powered loudspeakers. For computer audio playback, there’s asynchronous USB driven by Sabre’s new M-Series 32-bit DAC chip for up to 384kHz PCM and 64x/128x DSD playback. Plus there are three different PCM response curves. With dual analog inputs and volume control bypass for use as a DAC only. 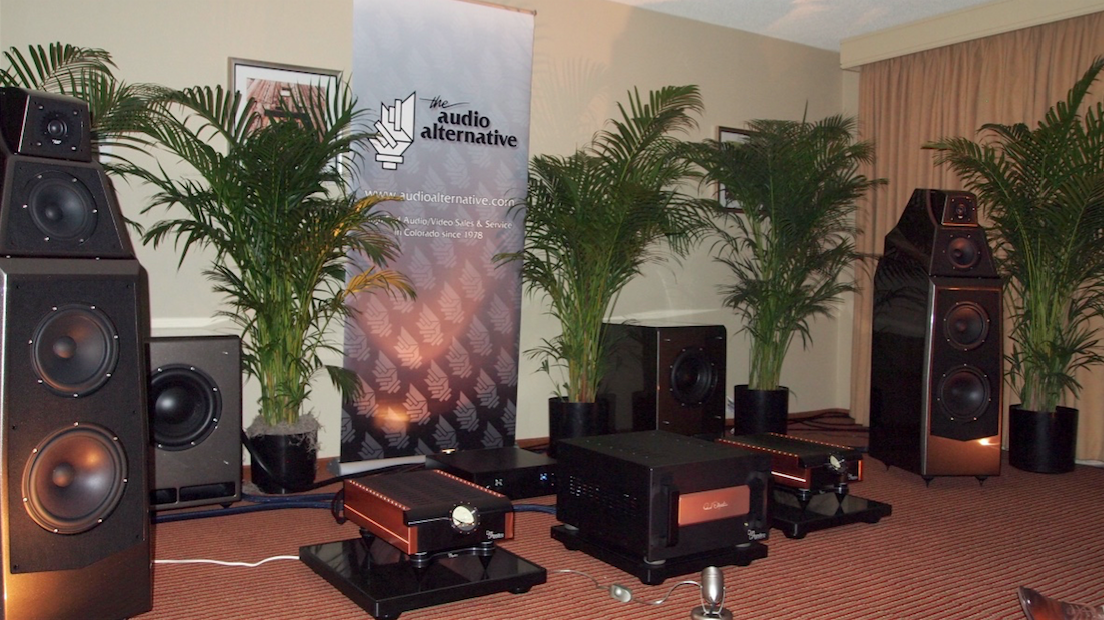 I had my first look and listen to D’Agostino Master Power Classic Stereo amp ($12,000). No outward frills, it lacks the otherworldly visual design artistry of the Momentum components, but makes up for it with its plethora of the core technologies and D’Agostino’s latest thinking on amplification. Packing huge power reserves, it’s rated at 300Wpc—a figure that doubles all the way down to 1200Wpc into 2 ohms. Reviewer Jacob Heilbrunn will be reporting on this amp in a forthcoming issue.

Finally, as the show was coming to a close, the exhibit that hit the right note for me was in the On A Higher Note suite. The setup featured the Mola Mola Makua preamp ($13,450) Mola Mola and Kaluga power amp ($18,000). Driving the Vivid Giya G3 loudspeakers (with Luxman, Soundsmith LP front end), I felt as if I were hearing these wildly eccentric-looking speakers for the first time. The sound was detailed and relaxed, with superb soundstaging. Vivid indeed.