The most shocking development at this year’s 2015 show wasn’t that LPs were back—it was the black disc’s utter dominance. “Analog gone wild” might be the motto for the audio fest. Room after room featured a turntable—often two!—as the main source of playback. What a pleasure to see it has reestablished itself as a reference for good sound. Turntables in a variety of shapes and sizes abounded: some ostentatious, others demure. In fact, there were so many that quite a number were simply on static display.

I couldn’t help but observe that the ones in use spinning vinyl all seemed to sound darned good. The old bugaboos that I’m way too familiar with from my childhood days, when I spun a goodly number of LPs on my father’s hardy Dual ’table from the Black Forest, are simply gone. Sure, you can obtain greater or lesser resolution from the various ’tables at the show, but undistorted and pellucid sound seemed to emanate from them without fail. My take: regardless of price, at this point you simply cannot go wrong in procuring a turntable. 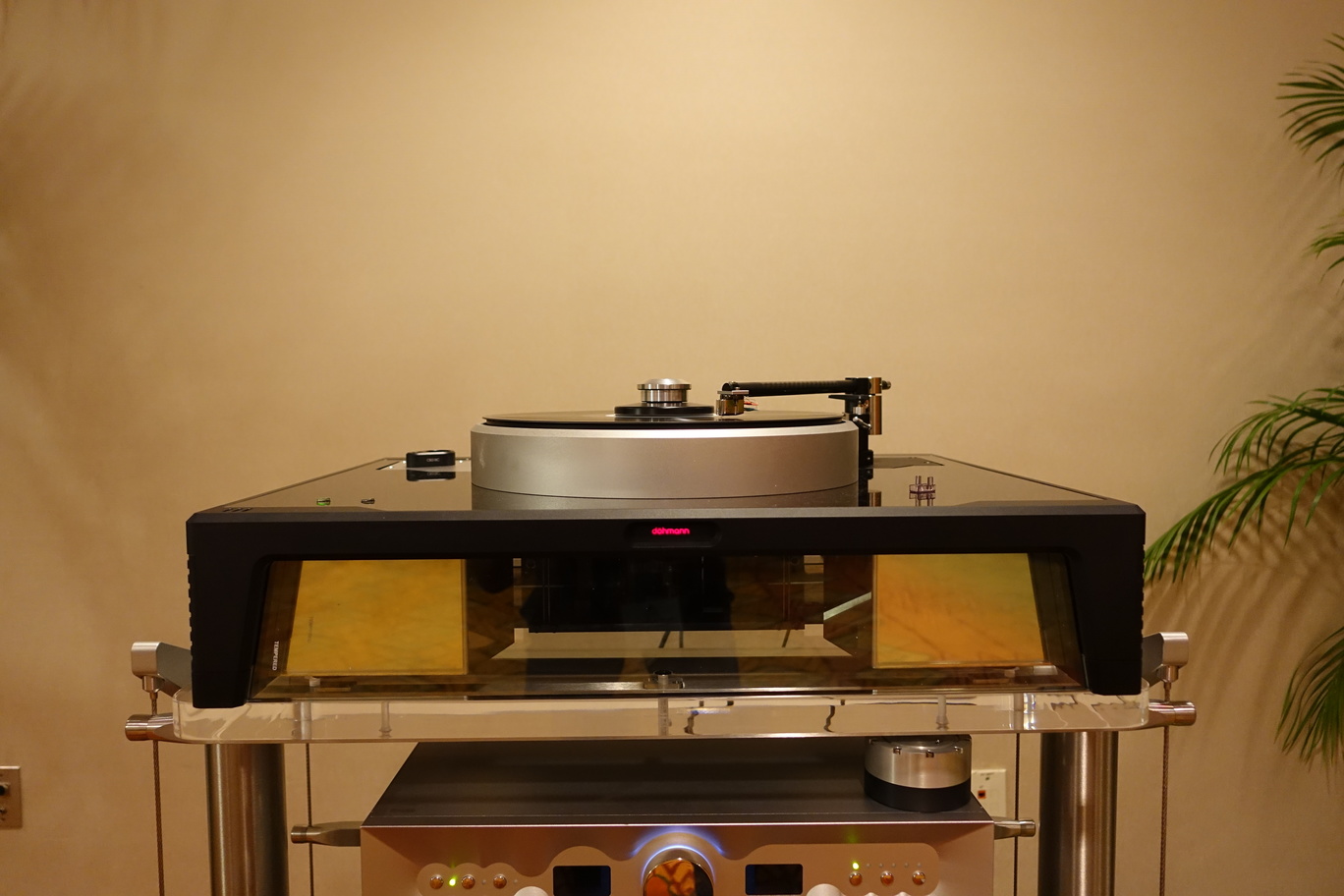 Döhmann Helix 1 Turntable ($40,000)
The eponymous new Döhmann table—engineered by a gregarious Australian bloke named Mark Döhmann—turned quite a few heads. Not only is it sleek and attractive, but it also features a built-in Minus K platform that provides horizontal and vertical isolation from about 0.5Hz. You can even give it a shove while the ‘table is playing and there’s no disruption in the sound. The Döhmann sported a custom Schroeder CB tonearm. The ’table is manufactured by Thrax Audio in Bulgaria to keep costs down. The ’table sounded effortless and pristine on the $20,000 Thrax Lira monitor loudspeakers on a variety of classical and pop tracks; the highs were particularly enticing. 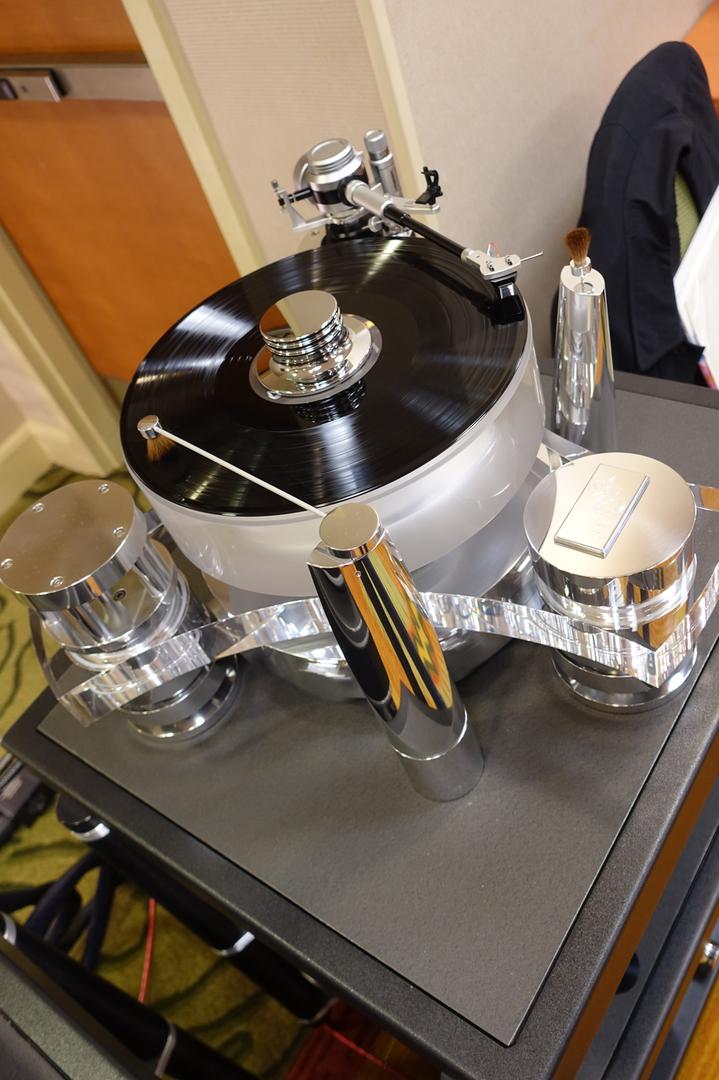 Air Tight PC-1 Magnum Opus Cartridge ($15,000)
The inimitable Arturo Manzano of Axiss Audio always carries top-drawer equipment. Together with Apex Audio, he introduced the Magnum Opus cartridge (mounted on a $55,000 Transrotor Tourbillon turntable), which supersedes the previous Air Tight Supreme in the lineup. What a luscious cartridge! “Maybe it’s time to upgrade to the Opus!” Manzano admonished me. It may not have quite the resolution of the Lyra Atlas, but it also has a full-bodied presentation that should woo all but the most hardcore dynamic freaks. It sounded detailed and powerful via the Focal Stella Utopia EM loudspeakers. In sum: a beaut with low internal impedance that resides at the zenith of cartridge performance. 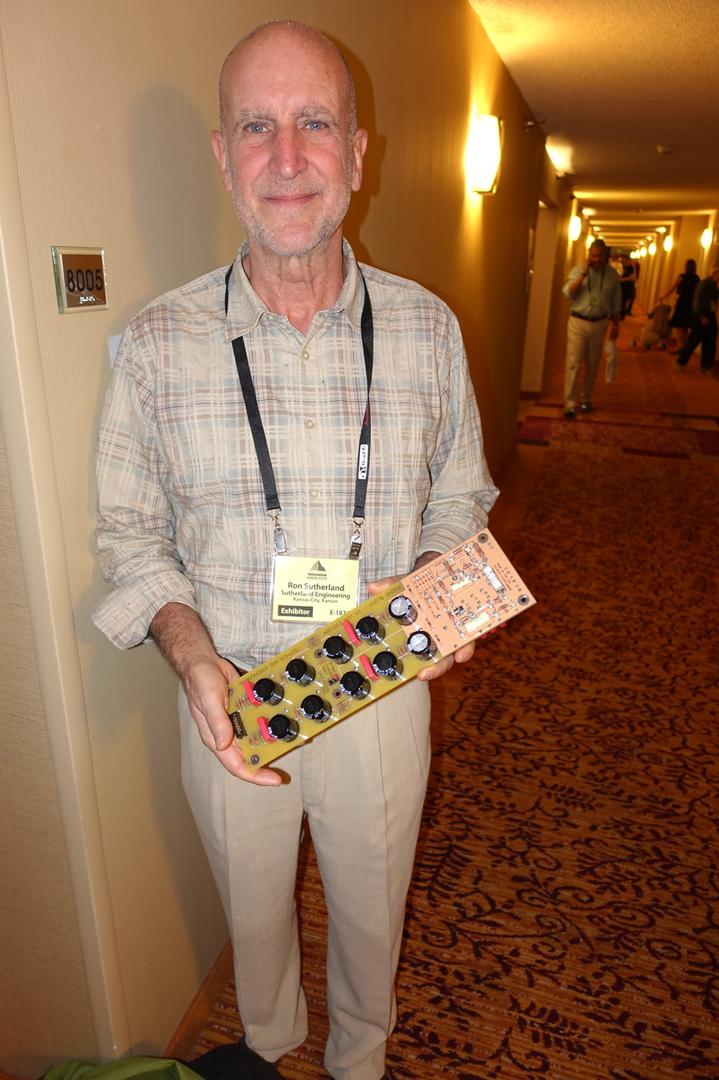 Sutherland Argentum Phonostage ($7000 per unit)
The Argentum is a nifty-looking unit that can even be deployed in mono, which is a big deal to jazz fans like me. Ron Sutherland is a soft-spoken and gracious man who pulled out the board of his new unit for all and sundry to see in the hallway of the Marriott. He emphasized that it’s a trickledown product from his Phono Blocks that now features all silver wiring—not to mention WBT next-gen solid silver RCA plugs—above a copper ground place with as short a signal path as possible. I’ve always admired his products for their sonic purity and this one is no exception. A great value.

Swedish Analog Technologies Tonearm ($28,000)
The indefatigable Maier Shadi of the Audio Salon in Santa Monica, CA, showed up with the new and much-touted SAT tonearm in tow. It hails from Sweden and is the product of the fertile mind of engineer Marc Gomez. It was mounted on the aforementioned Döhmann turntable. The tonearm, which I’m using on the Continuum Caliburn, was looking (and sounding) very spiffy indeed. The carbon-fiber ’arm sails through complex passages and belts out the nether regions like few others. Its unflappability is likely testament to the rigidity of the ’arm, which consists of layer built upon layer, then is baked in an autoclave. I lack the engineering chops to really comprehend what’s going on with the tonearm, but I can tell you that it’s a real treat to listen to the ultra-refined SAT. 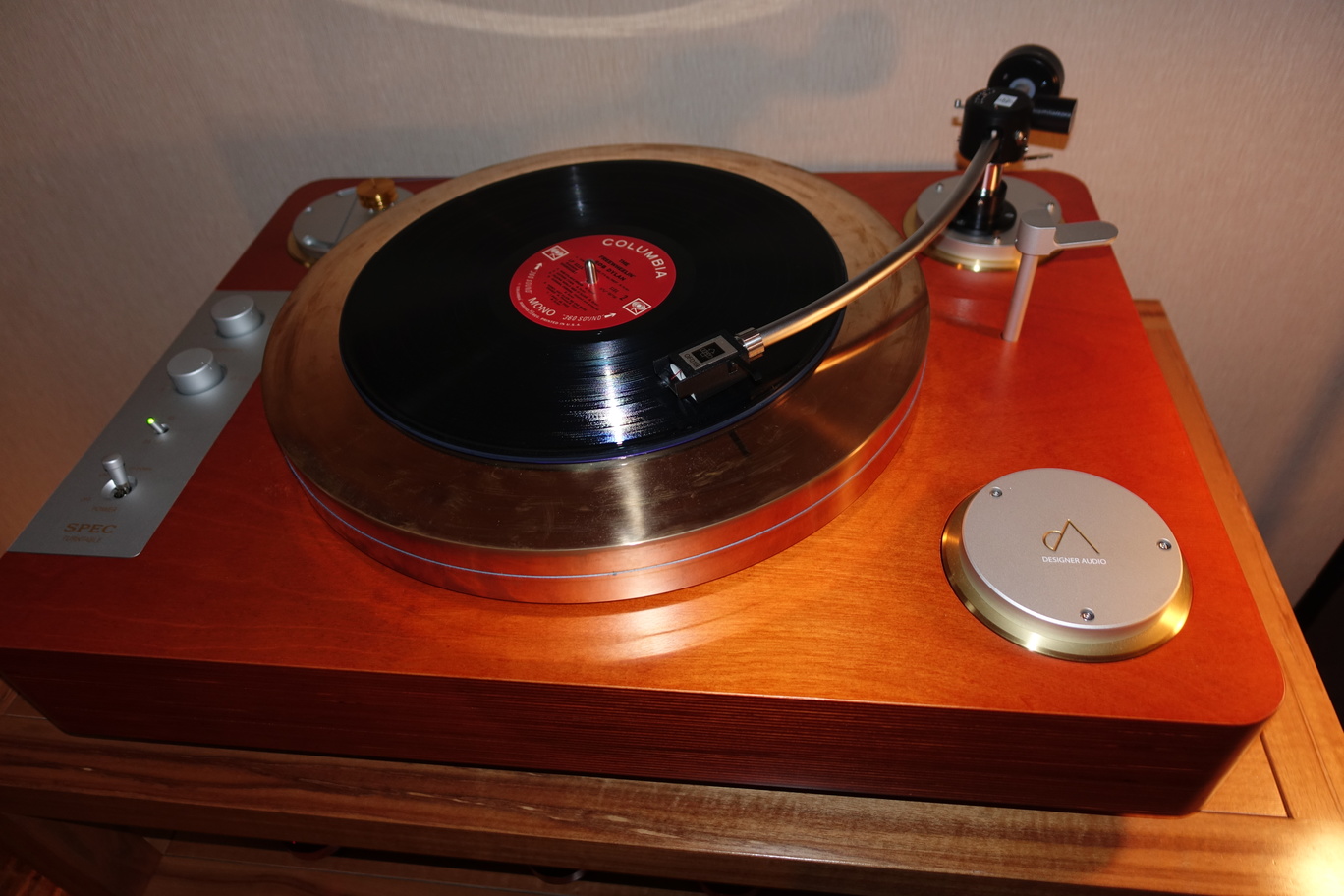 GMP-8000 Turntable, Spec Corporation ($24,000)
This turntable, outfitted with an EMT 997 tonearm, is imported by Jonathan Halpern of Tone Imports who was showing with DeVore Fidelity, whose lithe and nimble speakers have always appealed to me. As you can see, it’s stunning. At least I hope you will agree that it is, for I was smitten, and badly so, by its looks alone. Crikey, as my British friends would say, it may not be for everyone but the unique properties of the ’table promise delicate sound for the most discriminating connoisseur. The plinth is made of laminated Finnish birch and the ’table employs a string drive, which, in theory, ensures less delay in transferring what the designers call the “circumferential velocity”—love that phrase!—of the motor pulley to the table itself. In this day and age, when every technological approach once dismissed as outdated, antediluvian, and so on, is being given a new try, it’s refreshing to see this ingenious effort. I know I’d sure love to hear it in my own system.

The Saskia Ref 2 turntable ($53,000) looked quite formidable. It uses a shaft-less wheel for the idler drive and should be a real powerhouse. Brian Ackerman and Ypsilon electronics also produced a very winning sound with the Thales TTT-compact ($13,200) turntable.

Very different but also notable is an addition to the Audio Desk Systeme Vinyl Cleaner, which hails from Germany. What’s been lacking is the ability to clean 7” and 10” LPs. No longer. Robert Stein of UltraSystems was on hand with a solution to this conundrum, namely, a new product that features a ring and grommets that fool the machine into thinking it’s cleaning a 12” LP. It may not seem like much, but for jazz fans, among others, it’s a big deal.

Wolfgang Meletzky, formerly of MBL, was on hand to demo his spanking new $29,500 StromTank, or electric tank. It’s a high-power lithium battery pack with an integrated converter power supply that gets you off the grid for 5-8 hours. This colossus looked darned convincing to me.

Best Sound (Cost No Object)
I have to give the nod to the VTL/Wilson/dCS/Brinkmann room. It got off to a rocky start with Martin Reynolds of dCS playing what is truly the most dreadful rendition of “Pictures At An Exhibition” that I have ever heard. It reminded me of the old, compressed classical Columbia LPs I would listen to as a child. But with better cuts—a wonderful DG pressing of Anne-Sophie Mutter playing Saraste—I was quickly won over. The Wilson Sabrinas sounded elegant with no hint of bass bloat.

Best Sound (For the Money)
Offering superb playback for a reasonable price, the Exemplar Audio and Stillpoints room nailed it. The XL-II loudspeaker, designed by John Tucker, retails for $5495. Its virtue? A single-driver, folks, one that comes in at 6.5”. Coherence and speed were off the charts.

Most Significant Product Introduction
Without question the new Nordost Odin 2 cable made a marked contribution to a number of rooms and sounded mind-bogglingly good. A demo of Odin versus regular cable on a VPI Avenger turntable was especially illuminating.

Most Significant Trend
The resurgence of headphones. The Stax room featured superlative sound.

Most Coveted Product
I was agog at the fidelity of the Stax SR-009. Can I live without it?