Are there now too many audio shows? I ask because, coming hard on the heels of the Munich Show, this year’s Newport event seemed to get something of the short shrift. Several manufacturers did not have new product on display because the items had not yet arrived from Germany, which is a pity as the show occupied new digs at the Irvine Hotel, a more spacious and elegant venue that the Hilton of years past—and one that’s able to house the whole exhibit in a single building instead of spreading it out over two.

Amps, preamps, and integrated amps were my beat. I noticed three trends: One, everything was getting more expensive, in many cases, much more expensive. Two, there were more tube/transistor hybrids—the former in the front end, the latter in the amplification stages—than in the past. And three, quite a number of products were trumpeting zero feedback circuitry.

LIO Modular High-end Audio System
By far the most innovative single amp, preamp, and integrated amp I came across at the show was this hybrid unit, the LIO Modular, designed by one Vinnie Rossi. It can be purchased as a linestage preamp to which modules are added for DAC, phono (mm and mc, with remote loading), headphone amp, and power amp (dual MOSFET, 63Wpc into 8 ohms). The modules are all user replaceable, so consumers can build upon the initial purchase as their needs change, as just swapping out an upgraded module allows for improvements in circuitry and design. But the real innovation comes in the use of two rows of ultra-capacitors to supply power. Once charged, these are completely off the power grid, thus obviating the need for expensive power-supply conditioners. It made lovely sounds driving Harbeth Super HP5plus speakers in the Fidelis room. Price depends on configuration, but the deluxe version with everything retails for $7725 and is available in black or silver.

Luxman EQ-500 phonostage
Distributed by On a Higher Note, the Luxman EQ-500 vacuum-tube phonostage ($7990) replaces the award-winning PD-171. The 500 is built for flexibility and convenience, with all adjustments on the front panel, including loading, capacitance, gain, stereo/mono, and polarity. Inputs for three pickups are available as well as low- and high-cut filters. 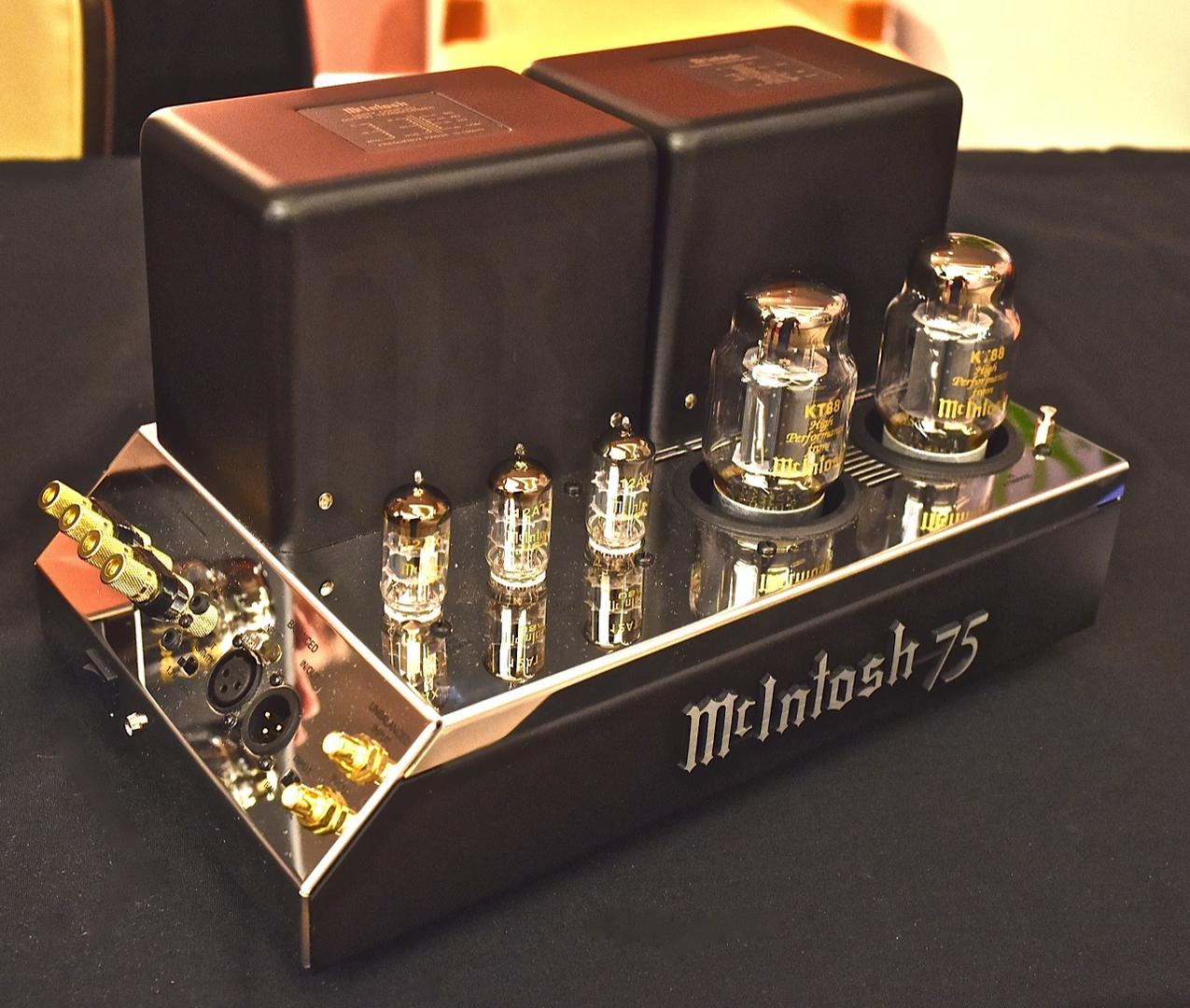 McIntosh MC75
The McIntosh MC75 is the mono version of the company’s classic MC275 stereo amplifier. For some reason, back in the day the 75 never acquired the status of its stereo brethren despite identical specs, performance, and Mac’s proprietary Unity Gain Circuit, not to mention the putative advantages of completely separate monoblock amplifiers. Like the 275, the 75 has been brought up to date with balanced inputs, banana jacks, and IEC power cord receptacle.

Wavac Audio Lab HE-833v2
Wavac Audio Lab’s HE-833v2 is said to be the most powerful single-ended-triode amplifier now made. At 150 watts, this SET monoblock eliminates coupling capacitors from the signal path and boasts a frequency response of 20Hz–100kHz. If these things really do generate the power claimed, it means that SETs’ major stumbling block of typically very low power output is now effectively eliminated, albeit at the whopping price of $79,999 a pair. 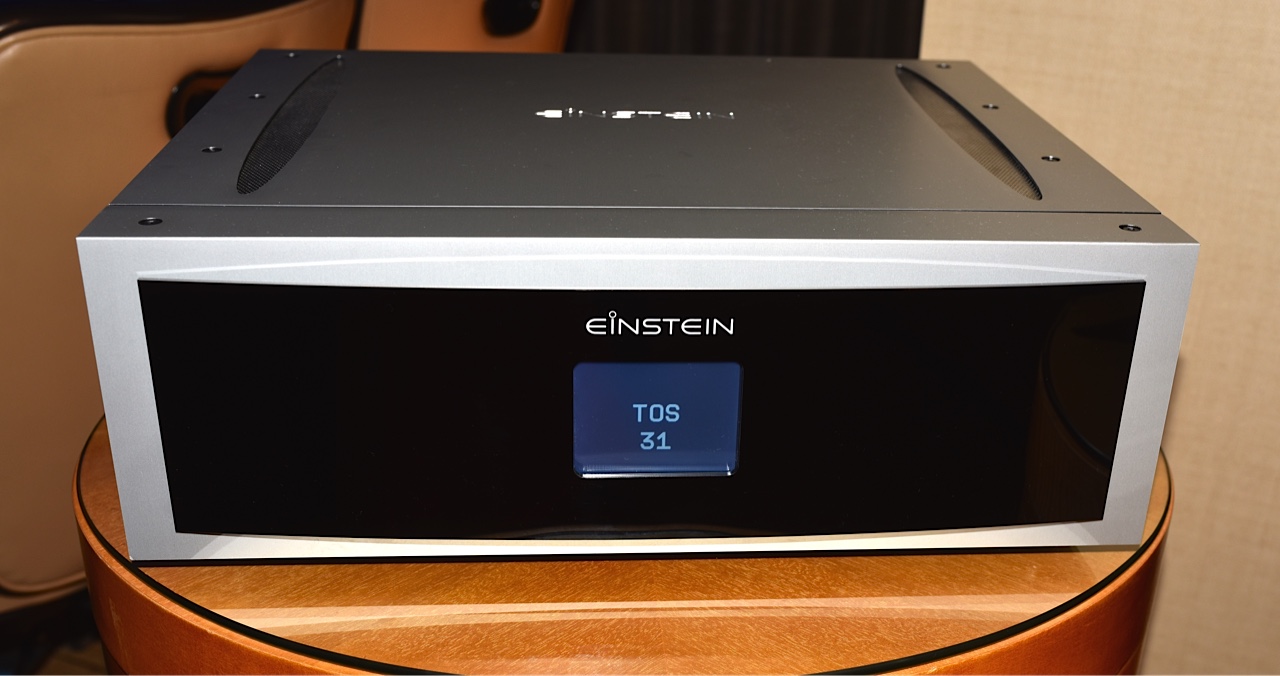 Einstein Electronics
Einstein Electronics from Germany is a name new to me, but they were featured in an exhibit with Bob Graham’s Phantom Elite tonearm and the Air Force One turntable and Audio Machina Maestro S speakers. The Einstein products are so new they don’t even have domestic prices yet, nor was the nomenclature entirely clear (i.e., the names in the brochure are not identical to what is on-line), but they are not cheap. Tube/transistor hybrids consisting of preamps, phonostages, and power amps were the products amplifying the signal and driving the speakers with reproduction that was among the most open, dynamic, transparent, and detailed I heard at the show. Also active was the Einstein’s Tune Integrated amplifier. This is a line worth watching.

With Newport coming so soon after Munich, there wasn’t much in the way of auspicious debuts. However, though it’s not my category this year, my heart was gladdened by the reappearance of QUAD electrostatics (also recently seen at AXPONA in Chicago), absent these last two years due to a lack of North American distribution. That has been rectified as the brand is now being imported by MoFi Distribution (sister company to Mobile Fidelity Sound Labs), which had on display the QUAD 2812 ($11,999/pr.), the latest updating of the ESL-63 (that began with the 988 and continued with the 2805, my reference), sounding gloriously transparent and uncolored (despite a distinctly less-than-sympathetic room). Norbert Schmied, formerly with Sumiko, informs me that QUAD’s entire electronics lineup has undergone a redesign and will be along soon. Happy news indeed. Meanwhile, Robert E. Greene is in line to review the 2812. 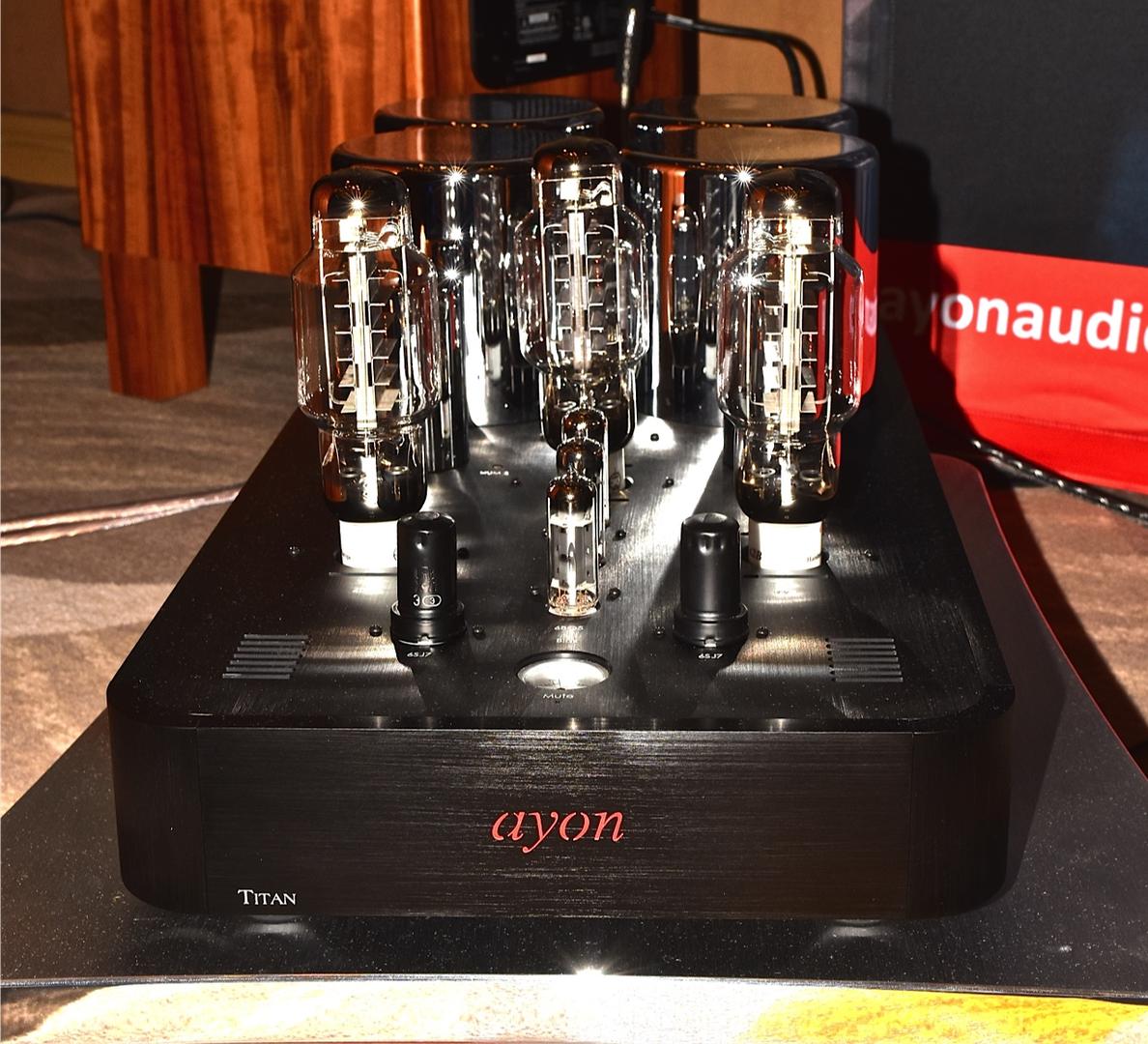 Ayon Audio introduced a bewildering number of products, the most imposing of which was the Titan SET Gen 4 monoblock ($53,900/pr.), 75 watts of pure Class A, with an onboard computer system that lets you know in advance the condition of the tubes and the overall operation of the amplifier itself. Modwright’s PH 150 phonostage ($7895) is an all-tube transformer-coupled design (with external power supply) featuring resistive and capacitance loading that can be adjusted on the fly. Moving coils are accommodated with transformers—used more and more on phonostages, I’m discovering—and there is a stereo/mono switch and both RCA and XLR outputs are provided.

Mark Levinson has been quiet of late, but was here showing—and showing off—its new No.585 integrated amp ($12k) that features fully discrete, dual-mono analog circuitry with four stereo analog and six digital inputs—plus a massive, oversized 900VA toroidal transformer with individual secondary windings for the left and right channels that generates 200Wpc stable down to 2 ohms.

I’m not sure if Acapella’s LaMusika integrated amplifier is the most expensive out there, but rated at 100 watts and priced at $100,000 (this is not a misprint), this zero-feedback hybrid design costs $1000 a watt. Perla Audio, a name new to me, was showing a minimalist preamplifier, the Maestro, which boasts a non-resonant chassis, state-of-the-art parts and componentry, including a 48-position stepped-resistor volume control. A matching monoblock amplifier, the Righello, priced at $18k/pr. and rated at 100 watts into 8 ohms and 200 watts into 4 ohms, also claims zero feedback, along with hand-soldering (using Cardas’ ultra-pure quad solder) plus a non-resonant chassis.

Balanced Audio Technology had a new lineup with the REX II linestage ($25k), the VK-P12SE phonostage with Super Pak option ($12,495), and the monoblock REX II power amps ($39,980/pr.). The phonostage uses transformers for low-output mc’s and eschews feedback; the linestage uses transformer coupling the better to drive low impedance loads; the power amp can be operated stereo (80/80) or mono (160 summed) and is a fully symmetrical circuit.

Two of my favorite pieces of electronics that I’ve reviewed in the last several years are now upgraded. The whole circuit of Vacuum Tube Logic’s TL6.5 Signature Preamplifier Series II, the original version of which I found one of the finest linestages I’ve ever used, has been pretty much redesigned to incorporate many of the advances found in VTL’s flagship TL7.5 Series III preamp. And Luxman has a new version of its 20-watt Class A integrated amplifier that I was so crazy about seven years ago: The L-550AX ($4999) has the classic styling of the original (with meters à la McIntosh), a full complement of controls (including balance, bass, treble, filters, even A/B speaker switching), and substantial upgrades in parts, circuitry, and construction (already very high-quality to begin with). I can’t wait to run this thing through its paces.

I came across little that could be said to be budget priced, but there was one compact, minimalist integrated from Heed Audio Elixir that sold for $1200. It was so new there wasn’t much information on it, but driving speakers of Lilliputian dimensions, it sounded better than respectable, with most of the limitations inherent to the speakers rather than the amp, I’d guess.

Best Sound (for the money): Emerald Physics KCII speaker system ($2495/pr.) driven by Emerald’s EP100.2SE amplifier and Anti-Mode’s Dual 2.0 as preamp playing CDs from a modest Marantz player. This demo featured among the most involving overall sound that I heard at the show.

Most Significant Trend: Lots of zero feedback in amplifiers and more transformers in for mc’s in phonostages.