Audio shows can sometimes feel like a round up of the usual suspects. But during T.H.E. Show Newport Beach 2014 there was an abundance of interesting and sometimes wonderful new models, many of which were from new companies. I focused my attention on these fascinating newcomers, along with some particularly intriguing new products from more familiar faces. (I should add that T.H.E. Show was admirably run, with everything functioning as smoothly as one hopes one’s tweeters sound. Not unusual for T.H.E. Show organizers, but much appreciated). 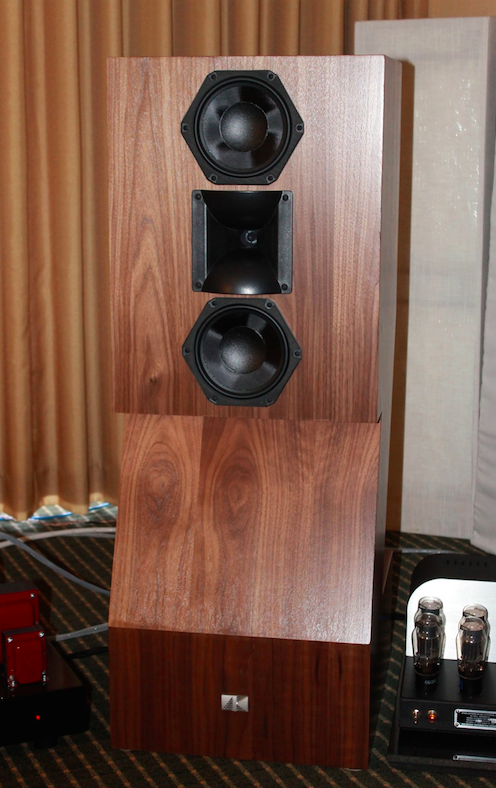 Audio Kinesis Zephrin 46
The Zephrin 46 from Audio Kinesis ($5k/pr.) is a speaker unlike any I have ever seen. The Zephrin 46 combines a forward-radiating MTM configuration, a compression driver tweeter, and additional drivers behind that are close to the floor and firing upwards. The idea is to generate a controlled-pattern direct arrival together with a delayed and uncorrelated (and abundant!) room sound bouncing off the ceiling. The exact balance of the speaker was hard to comment on since they are adjustable through plugging or unplugging ports and through choice of tweeter resistors. The overall character of the speaker is quite different from the usual forward-radiating box. But the speaker has compelling virtues: musical, with a warm, full sound; focused images in spite of abundant room sound; and a remarkable dynamic ease. Even the loudest moments of Freddy Kempf’s BIS recording of Rachmaninoff solo works were utterly without strain. Ella Fitzgerald’s “I cried for you” from Let No Man Write My Epitaph sounded very natural indeed. I spent a long time listening here, in more than one session, such a relief was it from “hi fi” in the negative sense. Unusual but fascinating. 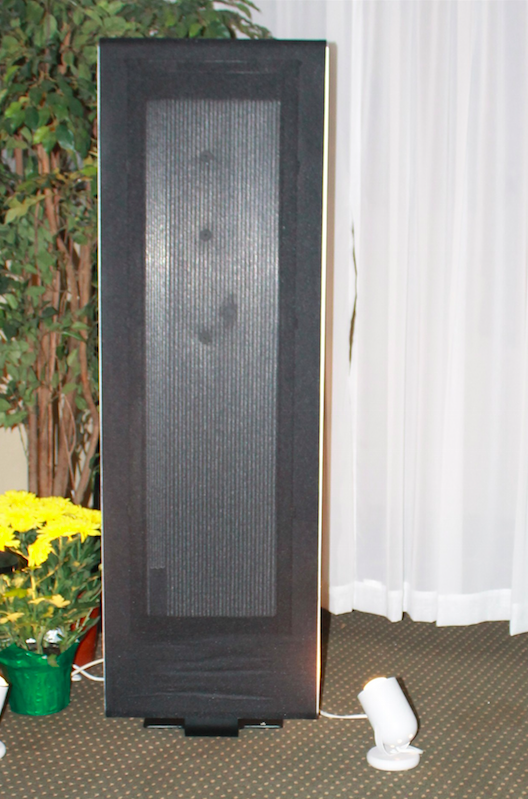 Magnepan 0.7
This new prototype model (to appear later this year) seemed to me to offer the usual Magneplanar virtues of realistic size and scale on large music together with, to my ears, a lowered level of coloration compared to some previous Magneplanar models. In particular, Christopher Tin’s “Waloyo Lamoni” (for orchestra and chorus) from Music from the Left Coast, St. Matthew’s Chamber Orchestra, Soweto Gospel Choir (TAS review issue 242) sounded remarkably like the real performance—and I would know (I was playing in the orchestra on this). This new model uses only quasi-ribbon technology rather than planar magnetic in the older sense, said Magnepan’s Wendell Diller. Whether for that reason or some other, this struck me as something extraordinarily promising and something of a break-through for Magnepan. Anticipated price: $1300-1500/pr. 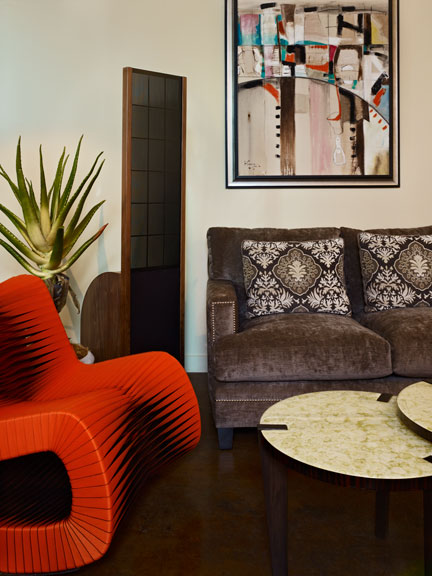 Sanders Model 10D electrostatic
This hybrid electrostatic speaker is essentially the same as the previous 10 series models, but with a new woofer. The change of woofer, along with the bi-amping using a digital crossover powered by Sanders Magtech amplification, eliminated a certain thinness in previous versions of the Sanders 10 to provide a remarkable level of neutrality. Perhaps not everyone wants the extremely direct sound generated by the fairly wide and hence inevitably beamy single electrostatic panel. But if you do like this kind of directness, one gets the impression here of hearing very much what is actually on the recording. And the listening room around one all but vanishes. It is quite an effect—you have to hear it to believe it. In its distinctive way, this was one of the very best sounds at the show. Speakers: $8,000/pr. System price: $15k. 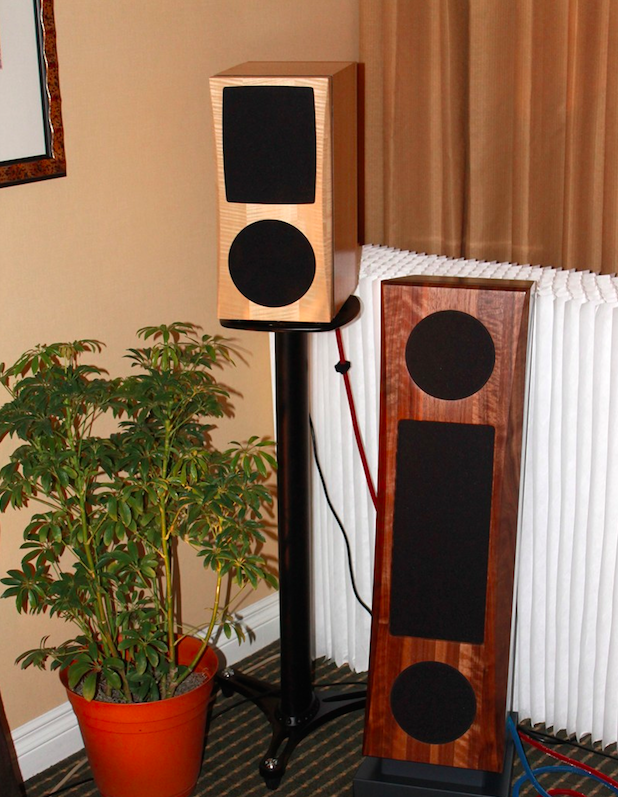 The smaller brother of the Janszen ZA2.1 that I previously reviewed produced very clean, clear, and essentially neutral sound. With a robustness defying its small size, it gave up remarkably little in switching back and forth between it and the larger model. Indeed, the little sibling here seemed to me on a quick listen (with due allowance for room effects since the speakers were not in precisely the same place) perhaps even to be slightly smoother through the mids to lower treble than the bigger model. This was an extraordinarily attractive sounding exhibit, in a small room where the speakers had to be what one might have expected to be uncomfortably close to the side and back walls. (I am scheduled to review these soon.) Price $4,495/pr. 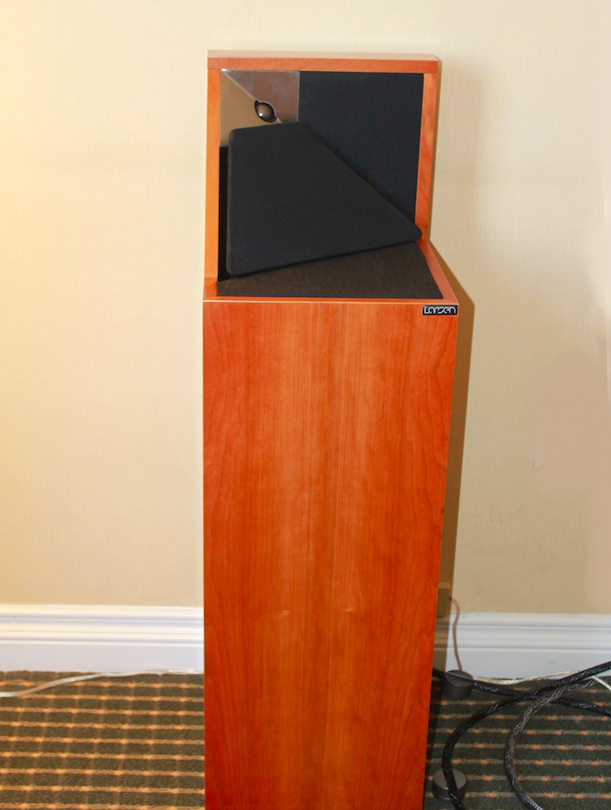 Larsen Model 8
John Larsen and U.S. Distributor Audio Skies (Michael Vamos) were showing the Larsen Model 8 ($7k/pr.), a further development of the ideas of the late legendary Stig Carlsson on how to make a speaker produce correct sound in actual listening rooms. (Larsen worked closely with Carlsson and is carrying on his work). The Model 8s are to be placed against the wall and are designed to provide a clean and uncluttered first arrival, with room reflections delayed and/or attenuated compared to conventional speakers, but with reflected sound that is correctly balanced when it does arrive. This speaker offered a unique and convincing sound, with a differentiation against the room around reminiscent of wall-mounted speakers of the past—Allison, Snell, and Carlsson’s own work—but with new improvements, to judge from a first listen. This is a most intriguing and inventive approach to making speakers sound in actual listening rooms. I am getting a pair for review and looking forward to it. 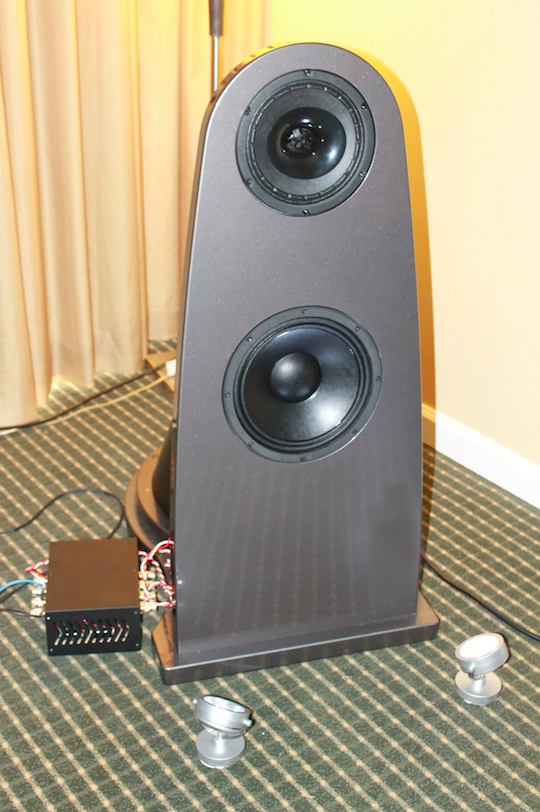 Emerald Physics EP-X
This full-analog speaker features no DSP correction, which contrasts with other Emerald Physic models. This diminutive floorstander of modest price produces excellent imaging, smooth sound over all, and surprising bass given its size, via an unusual bass enclosure which leads the back wave of the bass driver into a large, stuffed, flaring tube which fires at the floor. This peculiar looking but effective arrangement is not visible from the front—the speaker looks like a small panel speaker when viewed head on. This is a new departure for Emerald Physics and it seems to offer exceptional performance at the price. $1795/pr. introductory price (later $2500), including external crossover; with EP amplification included, $3995.

BMC Audio Pure Vox
This is not strictly a debut, since it appeared at CES 2014 (cf. Chris Martens’ report), but it is so good that I decided to mention it again. It’s a bipolar speaker, more or less, the rear sound being directed partially upward and thus not quite symmetric relative to the front. It produced remarkably realistic and attractive sound. Only their own computer files were available as source material, but an HDtracks version of Mozart’s Violin Concerto no. 3 sounded true in timbre, relaxed in dynamic terms, transparent without treble exaggeration, and beautifully detached from the speakers. It is not easy to keep a violinist happy with violin sound from speakers but this was doing the job. The Air Motion Transfer tweeter produces a very clean, smooth, and relaxed treble, and the carbon fiber-Kevlar composite bass/mid driver also sounded very well behaved indeed. Price: $6490/pr.

Usher Audio Mini 1 and Mini X
This is reaching toward the upper limit of my assigned price class, but the sound was very impressive indeed. My standby Rachmaninoff Symphonic Dances recording (Dallas/Mata/ProArte) sounded very convincing in dynamics and its full frequency range, and on the whole quite uncolored, though the violin seemed not quite in the BMC class. (Perhaps no one but a violinist would care!) Stereo presentation and the sense of scale produced was impressive given that this rather large system was all but shoe-horned into a rather small room. This was a bi-amped system with two Pass Class-A amps used on the mid/treble units, which feature diamond tweeters, and a big stereo Pass amp on the woofers. This was some of the most convincing orchestral sound at the show, especially given the small size of the room. Price: Mini 1, $3200/pr. With bass extension Mini X subwoofer units, total price $12,950/pr. 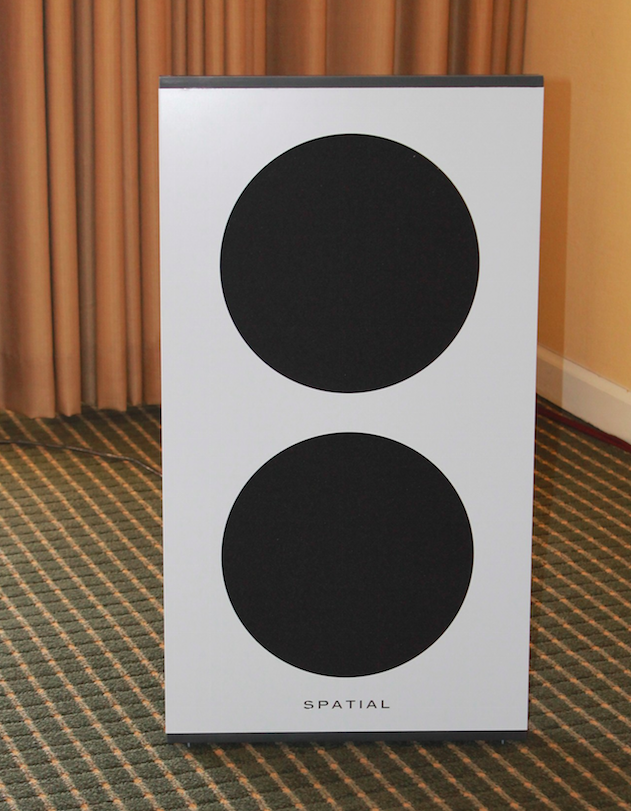 Spatial Audio M1
Clayton Shaw, designer of the first round of DSP speakers from Emerald Physic (no longer with that company) has here moved into speaker design without DSP. The Spatial Audio M2s ($2995/pr.) combine dipole bass with compression driver higher frequencies. They seemed a bit bass shy, and one would perhaps want to supplement them with a pair of subwoofers, but they lived up to the Spatial name in a big way. Stereo imaging and differentiation against the room around was startling. I like to tell myself that I am a timbre person primarily, but when stereo is good enough, it has a big impact. The opening of the last movement of the Beethoven 9th here (unknown recording from their computer files) did not sweep one away with bass, but the sense of being in another space with an orchestra was hypnotic. (The Beethoven also served to remind me that great music is what audio ought to be about, in case one had lost track in the general cacophony.)

Raidho X1
As one might expect, these small speakers had a precise, clean, controlled, non-resonant midrange and treble, true to the heritage of the company’s larger models. Perhaps because of their proximity to the sidewalls, these almost tiny speakers were excessively warm sounding, almost boomy, before their final bass roll off. Impressive in many respects, but I would like to hear them in a different placement. Price: $6400/pr.

Angel City Audio
These MTM stand-mounted boxes have been around for several years, but they now have a dedicated stand, which they rather need since their proper placement is quite far off the floor. They sounded slightly toppy—the Revelator tweeter used always sounds that way to me—but otherwise rather neutral and very clean, with good stereo performance as well. Price: $3k/pr.

Best Sound (for the money): Emerald Physics EP-X system. For $3995 including amplification, this compact if unusual looking system provides excellent sound at the price. An all but unbeatable bargain to judge from a quick listen.

Most significant product introduction: Larsen speakers. This is one of the most intriguing tries at wall placement of speakers yet, which very well could the way of the future.

Most significant trend: Speakers with unusual radiation patterns: Omnis, dipoles, ceiling splashers (Audio Kinesis), bipolars with the rear firing aimed up at an angle, wall placement speakers—people are trying everything. 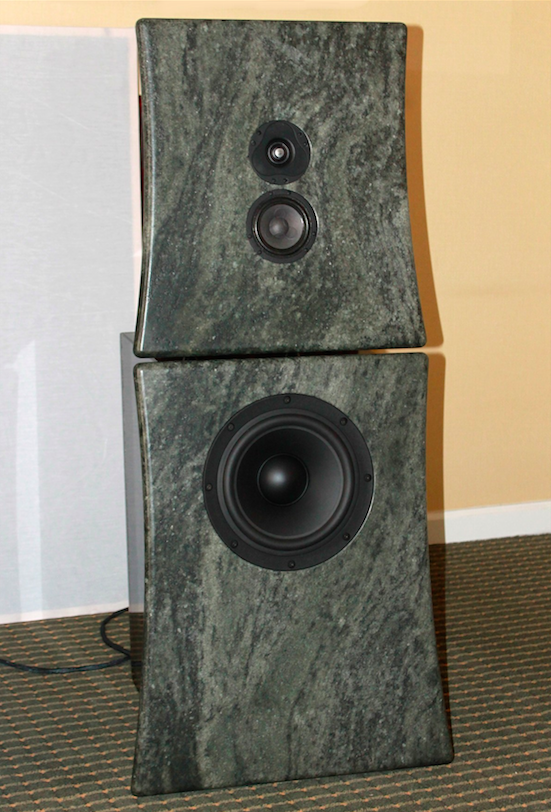 Most coveted product: Pietra Verde prototype speakers (projected price $45,000/pr). Bravo for resisting visual fashion and going for what works sonically, and work it did.