In Issue 272 I left little doubt about how much I enjoyed the flexibility and musicality of Audioengine’s HD6 powered loudspeaker system. For a compact barely a foot tall, this plucky bundle had it all—it was self-amplified, DAC-equipped, and Bluetooth-enabled. All that was needed was a source component. And for its target audience—the smartphone, tech-savvy millennial—it was just what the audio doctor ordered.

So what’s left when Audioengine strips away the power and connectivity? Actually, a lot. You get the HDP6, where the “P” stands for passive or unamplified—the type of loudspeaker that most audiophiles are familiar with. Cosmetically this stout little compact suggests a cozy and classic British monitor, a look suitable for a small den or study. It’s a bass-reflex configuration that uses a cleverly installed, rear-mounted, horizontally slotted port. It uses a silk-dome tweeter, ferrofluid-cooled, with a neodymium magnet. The woofer is a 5.5″ Kevlar woven-glass/Aramid composite with a rubber surround that’s housed in a cast aluminum frame for rigidity and increased heat dispersion. The crossover is unchanged from the HD6. The stiff MDF cabinets are available in several finishes, including walnut and cherry veneers, as well as satin-black paint. The front baffle is free of unsightly exposed woodscrews, and the detachable grilles affix to magnets hidden in the enclosure.

Lacking the built-in amplification of the HD6, HDP6 owners have the freedom to use the amp and cabling of their choice. In this instance I employed the excellent Simaudio Moon Neo ACE 50Wpc music player (review forthcoming) with Audience’s remarkable entry-level Ohno cabling. In my opinion, this represented gear that prospective Audioengine owners would reasonably consider pairing with these speakers. 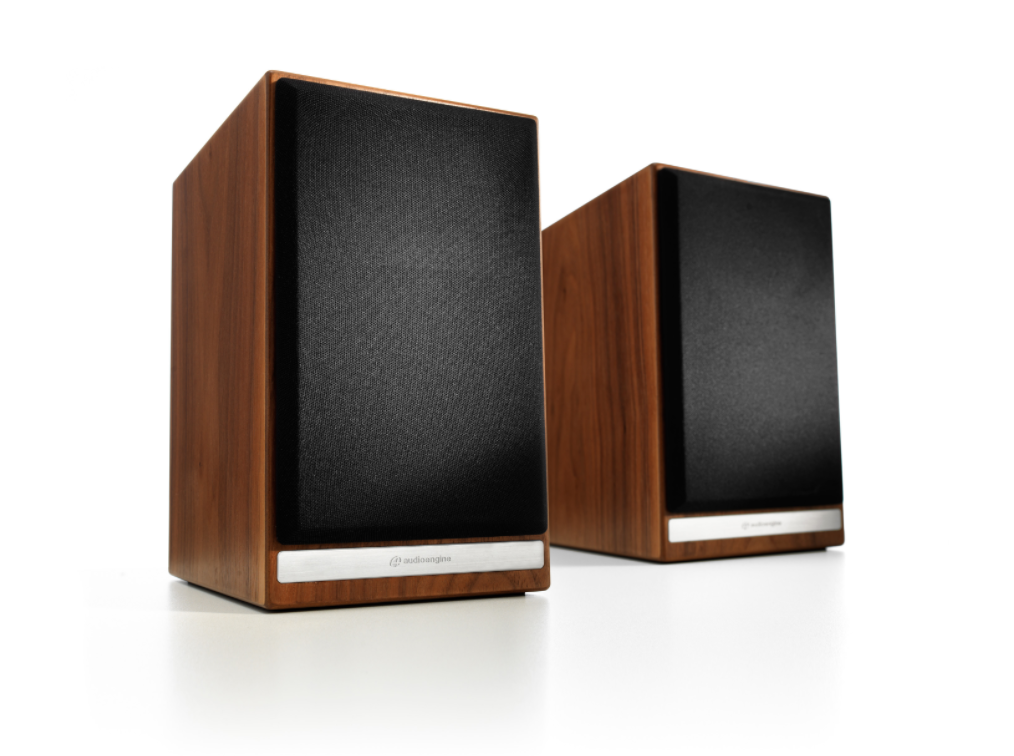 The HD6’s sonic character wasn’t turned on its head with the Moon ACE amp, either. And that’s a good thing. The HDP6 retained the same forgiving, ear-coddling midrange that I noted in the original review, a richer voicing allied with a level of bass response that suggested orchestral scale beyond what its petite enclosure implies. Still, the change in amplification revealed positive differences. Transparency was improved; transient attack was quicker off the mark; and image focus and detail were better. Dynamic liveliness in the midrange had more rhythmic jump. Pitch control and grip in the midbass were also better managed than the powered version.

As I noted in my original review, neither the HD6 nor HDP6 is ruler-flat across the frequency spectrum. There’s still a rise in the mid/upper bass that creates more of a general impression of bass rather than genuine low-end response. And with female vocals the HDP6 has some added emphasis in the lower treble that imparts a whiter coloration in these octaves. To be perfectly fair, however, sonic tradeoffs are part and parcel of loudspeakers in this range—the Audioengine keeps the colorations to a minimum.

The Audioengine HDP6 is a handsome, high-level performer for the traditionalist—the high-ender who still enjoys the rough-and-tumble mixing and matching of components. But keep in mind, the under-$1000 speaker segment is one tough neighborhood. It’s hotly competitive and populated by the likes of Elac, Revel, Magnepan, and PSB, just for starters. Joining these ranks is the HDP6, a worthy inductee that can hold its head high in such company. And that spells even more great news for the budget-minded audiophile.

Guy Clark: The Best of the Dualtone Years